Battleships at the turn of the 20th century, the mainstay of every major naval power, were based on designs and technology from the 1880s. In 1905, using this generation of ships, Japan defeated a slightly larger Russian fleet at Tsushima leading to the end of the Russo-Japanese War.

In 1906 Great Britain launched the HMS Dreadnaught. It was larger, had bigger guns and more armor. A new arms race commenced as ships built before 1906 were now called “pre-dreadnaughts” and viewed as inferior. Other countries raced to increase the size and power of their battleships. The United States and Germany started building more heavily armed and faster ships.

However, they rarely fought. In World War I, (1916) Britain and German fleets met in one big battle at Jutland. Germany failed to break England’s blockade. The British lost more ships, but the German fleet retreated and spent the rest of the war in port.

There was one battleship battle at the start of World War II when the modern German battleship Bismarck shockingly sank the older British HMS Hood in the first few minutes. Only three sailors survived the sinking of Hood. 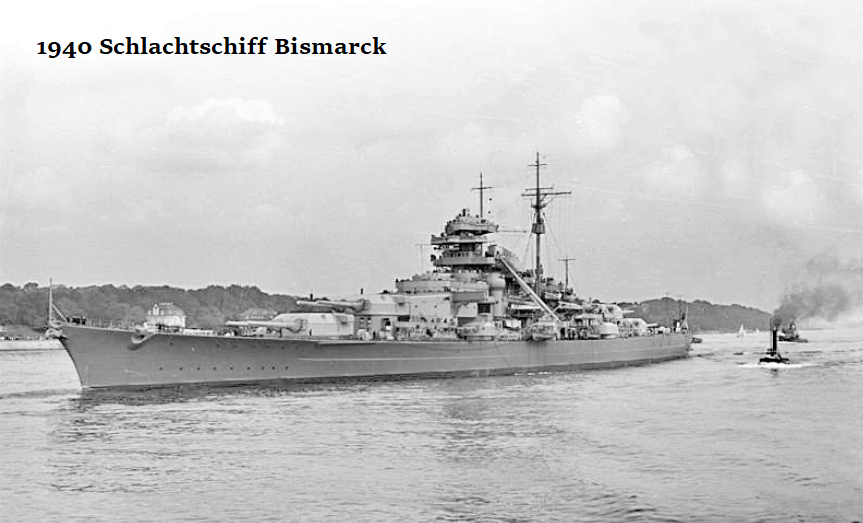 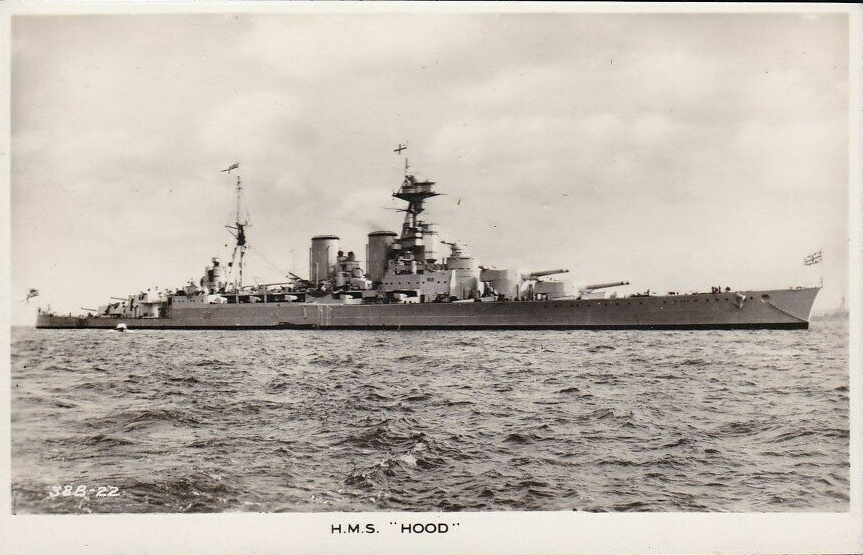 On December 7, 1941, the backbone of the US Navy were battleships completed prior to 1920. They were slow, lightly armored designed to fight ships at sea, not planes from above. The West Virginia, Maryland, Oklahoma, California, Tennessee, and Nevada were quickly sunk or damaged at Pearl Harbor. The next day the battleship Prince of Wales and battle cruiser Repulse were sunk by Japanese planes off the coast of Malaya. 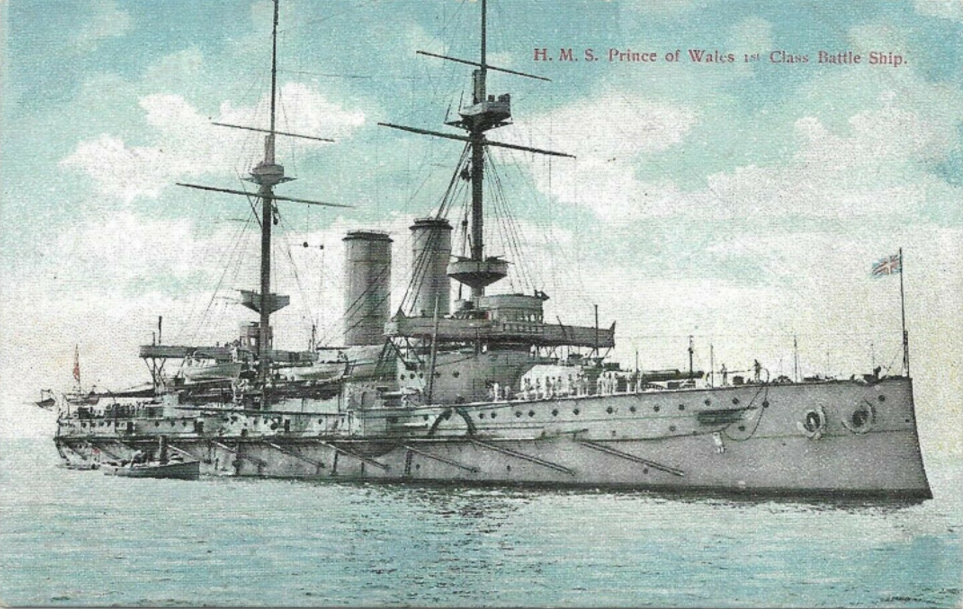 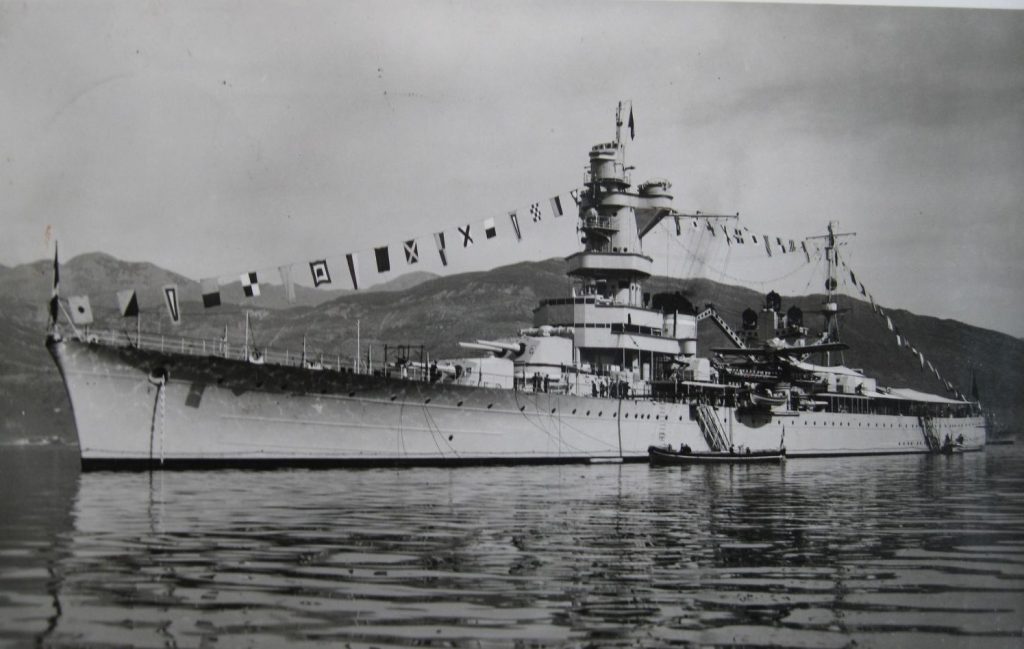 The Pearl Harbor attack destroyed or damaged our battleships, proving the power of naval aircraft. With limited forces the US managed a draw in the Coral Sea and a miracle win at Midway validating that aircraft carriers were now queens of the navy.

Since the European theater had priority the Pacific Fleet operated on a relative shoestring until 1944. When the US launched its first offensive, landing at Guadalcanal on August 7,1942, it had two aircraft carriers and a battleship to protect the 1st Marine Division.

Multiple naval battles were fought as the Japanese tried to bring troops and supplies to their beleaguered Guadalcanal garrison. Both sides lost thousands of sailors as fights between cruisers and battleships raged, usually at night. Ultimately the US Navy lost three times the number of Marines killed on the island.

The last naval battle occurred on the night of Friday, November 13, 1942, the Battle of the Solomons with two American battleships taking on an equal size Japanese fleet. The Americans won, sinking the battleship Hiei, (with help from Marine planes on Guadalcanal) and the next night the Washington and South Dakota sinking the Kirishima.

This was the first of only two times American and Japanese battleships faced each other in World War II. The second was at Surigao Straight during the massive Battle of Leyte Gulf in 1944 when five repaired battleships sunk or damaged at Pearl Harbor got their revenge, sinking a small Japanese fleet led by the battleships Fuso and Yamshiro.

During 1943 Admiral Chester Nimitz, commander of the Pacific Fleet was engaged in an island hopping push-back of the Japanese to their home islands. In November, Marines invaded Tarawa, a coral atoll, suffering huge casualties. Battleships and cruisers supplied vital support to this and following amphibious landings. Lessons learned saved lives on subsequent islands.

The new Iowa class battleships were the largest the US ever built, also the last. Five were authorized by Congress in 1938 and 1940 and reached the fleet during 1944. Four were completed: Iowa, New Jersey, Wisconsin, and Missouri. 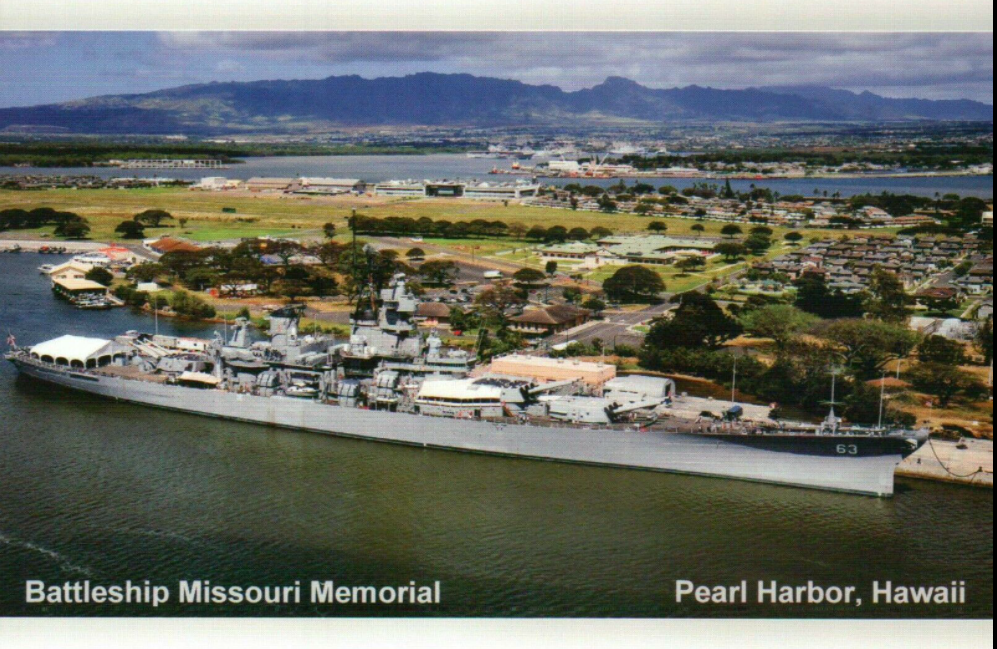 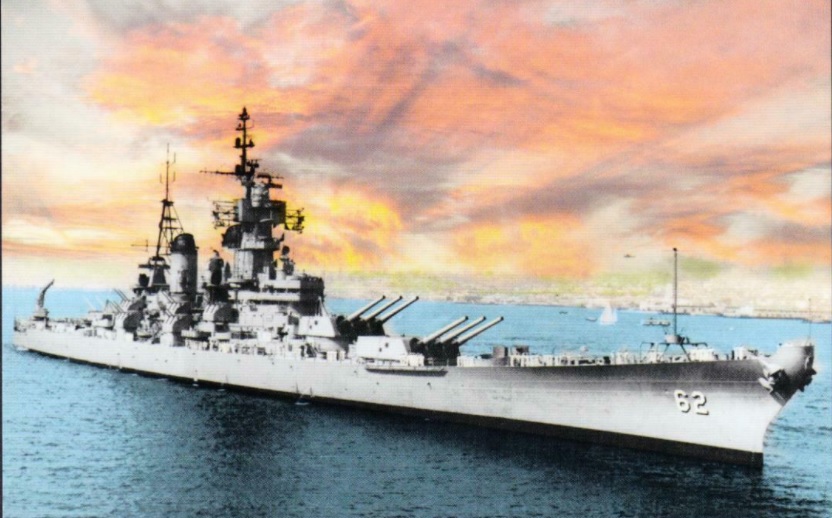 Iowa class battleships plus the ships from the Indiana and North Carolina classes formed task forces that would support invasions and engage in separate attacks on future targets and the home islands. They were critical to air defense of the carriers when the Kamikaze attacks began in 1944. Carriers won the big sea battles, battleships helped defend the fleet and support invasions.

Japan built the largest battleships ever constructed: the Yamato and Musashi were 10,000 tons bigger than the Iowa’s and carried 18” guns protected by thicker armor. Our battleships never faced them so we cannot know the better. They were sunk by carrier planes, Musashi in 1944 and Yamato in 1945.

Matched with the 33 knot Iowa class battleships they formed what became known as the “fast carrier forces.” The US built 24, most were sent to the Pacific. They formed task forces with four carriers and a battleships each, surrounded by cruisers and destroyers for defense. A fleet usually had four carrier task forces and a fire support group. The carriers had more than 1,300 combat planes. That Pacific Fleet was the most powerful naval combat force ever assembled.

On September 2, 1945, General Douglas MacArthur accepted the Japanese surrender on the deck of the Missouri. The war was over as was the battleship era. No more would be built. The Iowa class ships had proved their worth supporting invasions, bombarding future invasion targets, and providing vital air defense.

All four of the Iowa classes battleships provided fire support in Korea while only the New Jersey was in Vietnam. The Wisconsin and Missouri were modernized with the addition of cruise missile launching boxes. The Wisconsin participated in Desert Storm by launching missiles as air force and navy planes approached Baghdad. This ended their combat and active role in the US Navy.

I visited the Wisconsin and Missouri 52 years apart. My first visit at age 10 may have triggered my lifelong interest in WW II. By 16 I owned and had read all of Samuel Eliot Morrison’s history of the Navy in WW II.

Today the Missouri is a big attraction at Pearl Harbor; Wisconsin is a museum ship at Norfolk, Virginia; the New Jersey is on display at Camden, New Jersey; and the Iowa is a museum in Los Angeles, California.

[Editor’s note: A thoroughly compiled postcard collection of US Navy battleships will certainly include examples from the Illustrated Postcard Company of New York. They are easily distinguished by their corporate logo: a flying eagle holding in his talons a shield adorned with arrows and olive branches. Three of IPC’s postcards showing earlier, similarly named battleships are below. 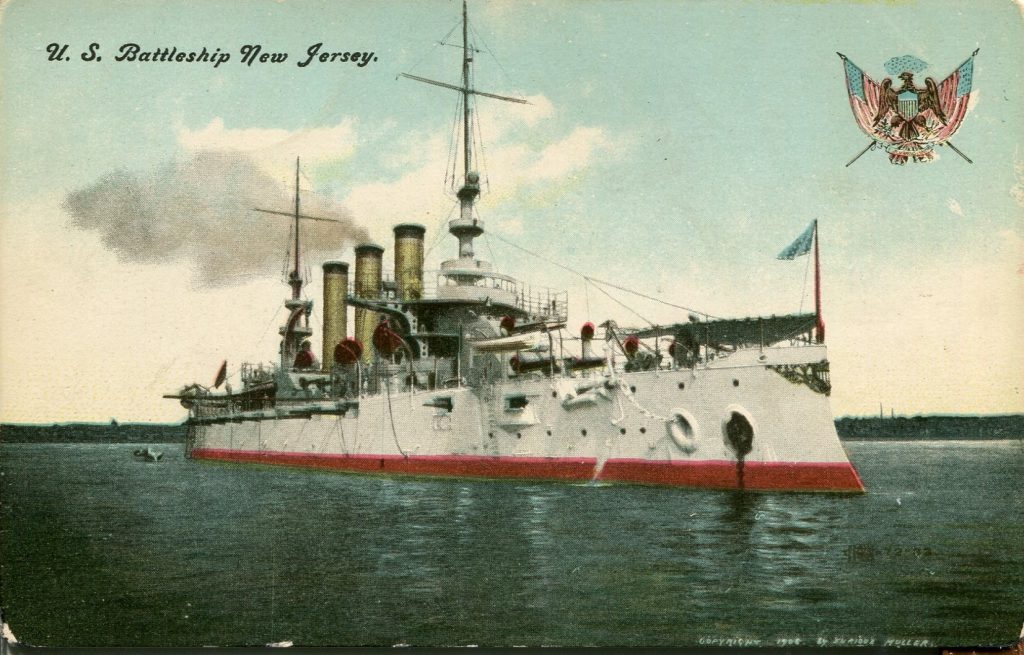 The first battleship (Bow No. BB-16) to carry the name New Jersey was a Virginia class vessel built in Massachusetts around 1902, launched in 1904 and commissioned in May 1906. 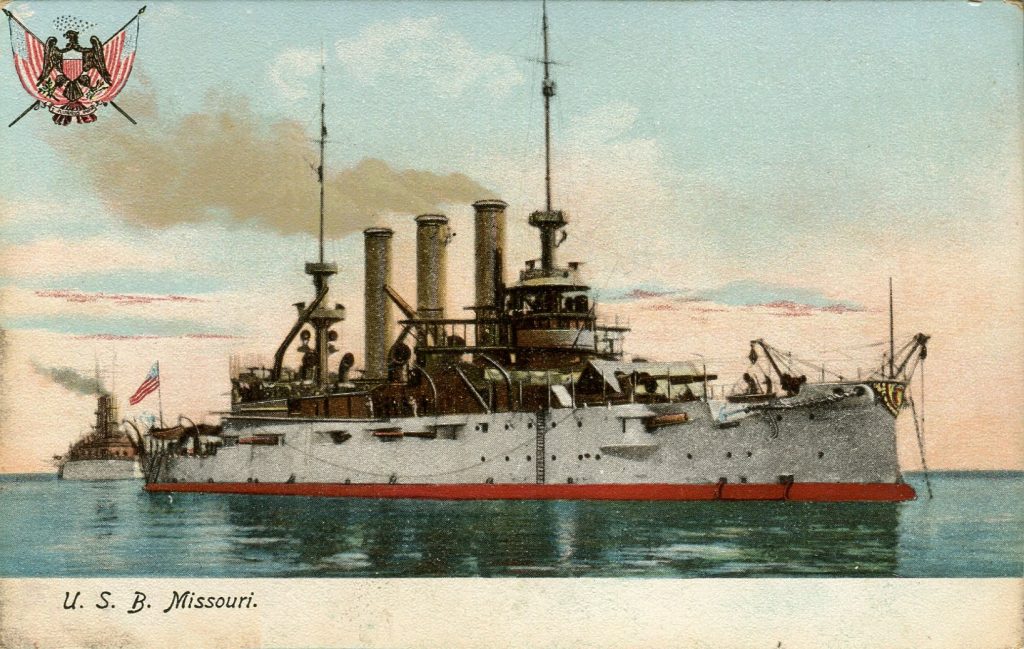 Three battleships honoring Missouri have served the US Navy. The second, shown here (Bow No. BB-11) was built in Virginia and commissioned in 1903. After service in the Mediterranean and later off the US east coast, USS Missouri took part in the Great White Fleet’s cruise around the world. 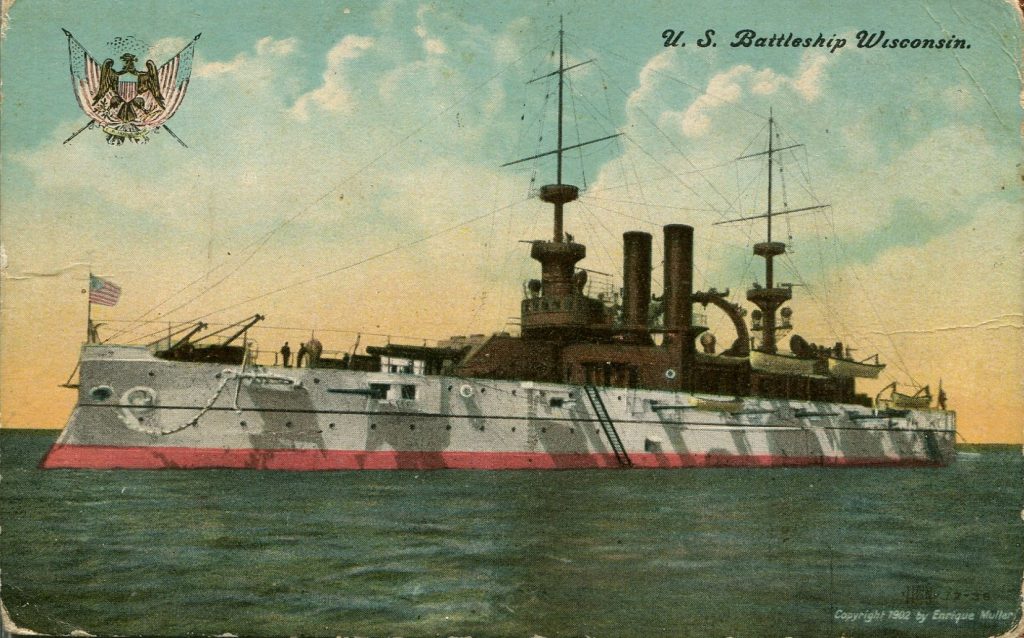 USS Wisconsin (Bow No. BB-9) was the first US Navy ship to honor the state of Wisconsin. Her keel went down in February 1897 at the Union Company in San Francisco. Completed in late summer 1898, Wisconsin was among the few American battleships to serve in four different fleets: Pacific, Asiatic, the Great White, and Atlantic.

Stefan Sommerfield has been fascinated by WWII and the US Navy for 65 years. He studied history at Johns Hopkins, under Stephen Ambrose, got a master’s degree at Fordham and then embarked on a business career in NYC. He continues to read old and new books about all aspects of the war. Stefan makes his home in Florida.
PrevPreviousThe February 2021 Postcard History Quiz
NextThe MetNext
3 Comments
Oldest
Newest Most Voted
Inline Feedbacks
View all comments
Peter Senft

Great information!!! A nice overview of WW2 in the pacifi9c.

Nice to know some of these historic ships survive. and that parts of the fleet destroyed at Pearl Harbor were able to be repaired and used again.

Excellent review and leads me to consider several new collecting options.
Great cards and part of a majestic past that became obsolete with newer technology.
Lesson today – Tech rules
Watch what is happening in robotics – where are those postcards?