The turn of the 20th Century was a period of optimism and creativity in the world of opera. A new generation of composers, exciting new operas, thrilling performers and exploding audiences were taking over in opera houses everywhere – in France, Germany, Italy, and the United States. Staking a claim for leadership of American opera was New York’s Metropolitan Opera, the Met, here represented by postcards of both its interior and building at Broadway and 39th Street. 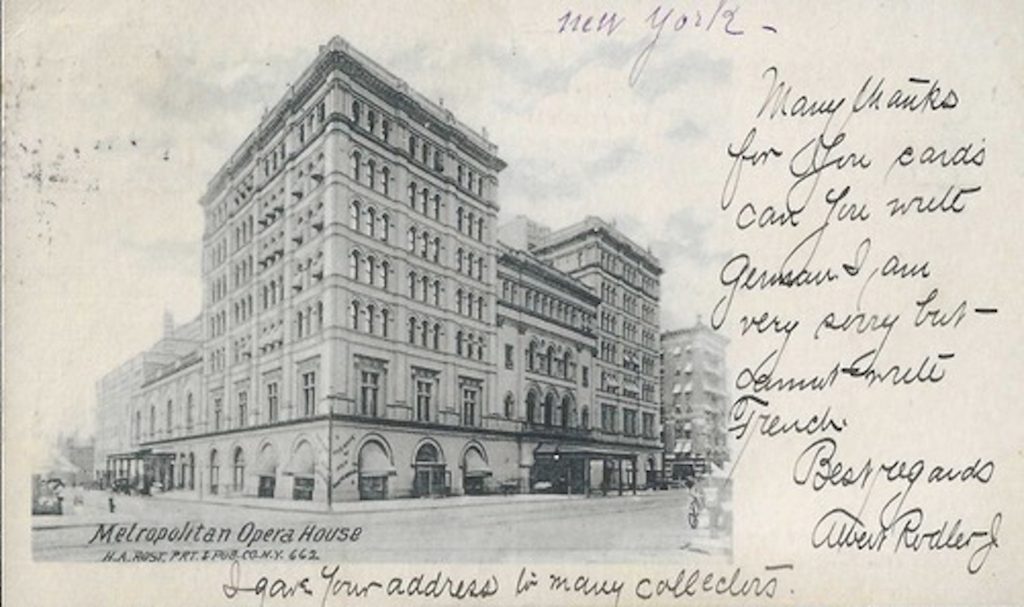 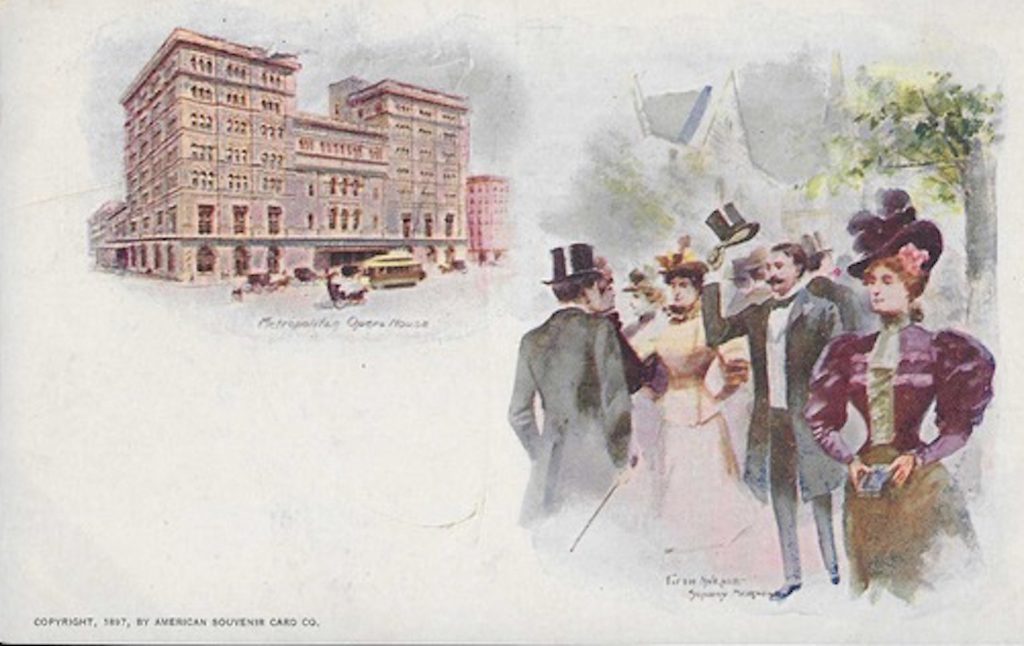 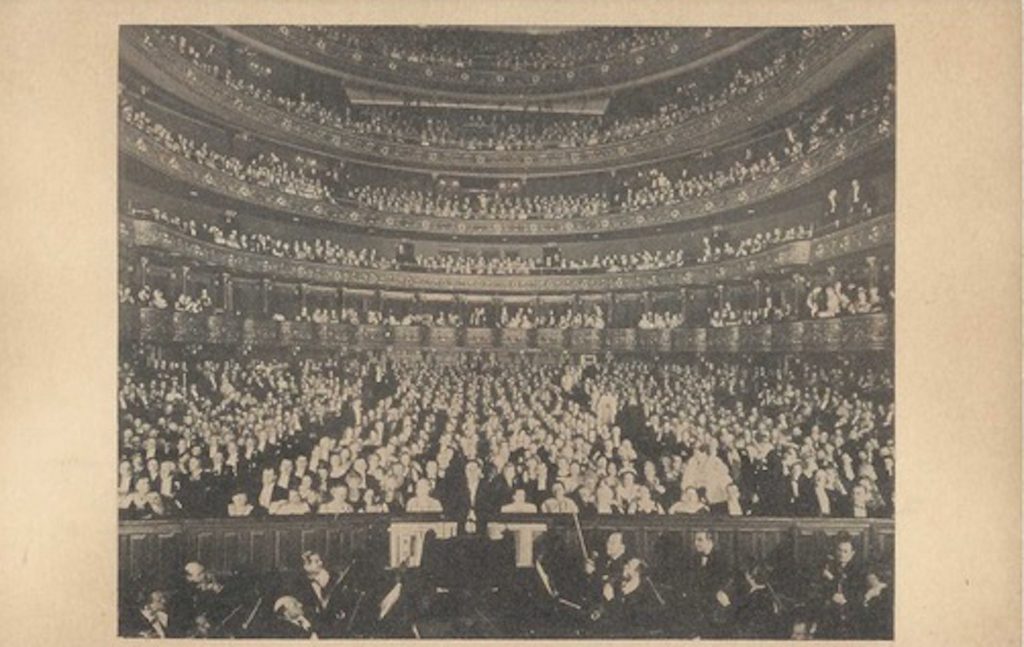 In addition to new operas available were new ways of communicating about opera and preserving great performances. Recording technology was being developed by Thomas Alva Edison and records were increasingly available to the music-loving public. Visual media, including illustrations, photography, posters, and postcards facilitated communication about performers and made operas more accessible to the public.

“Verismo,” which loosely translates as “truth-ism” was a movement, a style and a point of view that became popular in Italy as the century was closing among a cohort of composers that included Ruggiero Leoncavallo, Umberto Giordano, and Giacomo Puccini. Their aesthetic involved simple people, experiencing life-shattering crises, and displaying raw emotions – anger, jealousy, rage, shame. The style was new and refreshing, affecting composers in France and Russia, too. The Verismo style gave performers permission to reinterpret classical roles of the 18th and 19th centuries in fresh and expressive ways.

Intensified emotions on the stage drew singers closer to their audiences creating a bond that was both artistically meaningful and commercially rewarding. It was no accident that the first recording to sell a million copies was Enrico Caruso’s rendition of the aria “Vesti la giubba” from Leoncavallo’s opera Pagliacci (Clowns) released in 1902, 1904 and 1907. This time frame coincides with the publication, purchase and mailing of this postcard depicting Enrico Caruso as Il Duca in Rigoletto. Sent to Winona, Minnesota, in December 1905, the sender writes, “This is the greatest living tenor whom I have heard with keen pleasure this evening.” 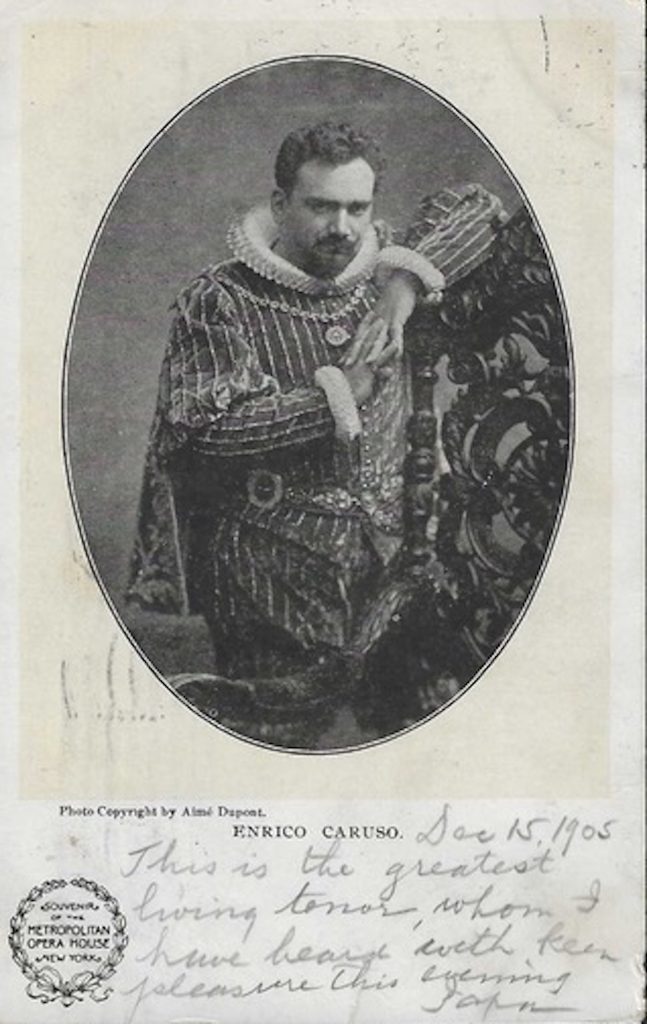 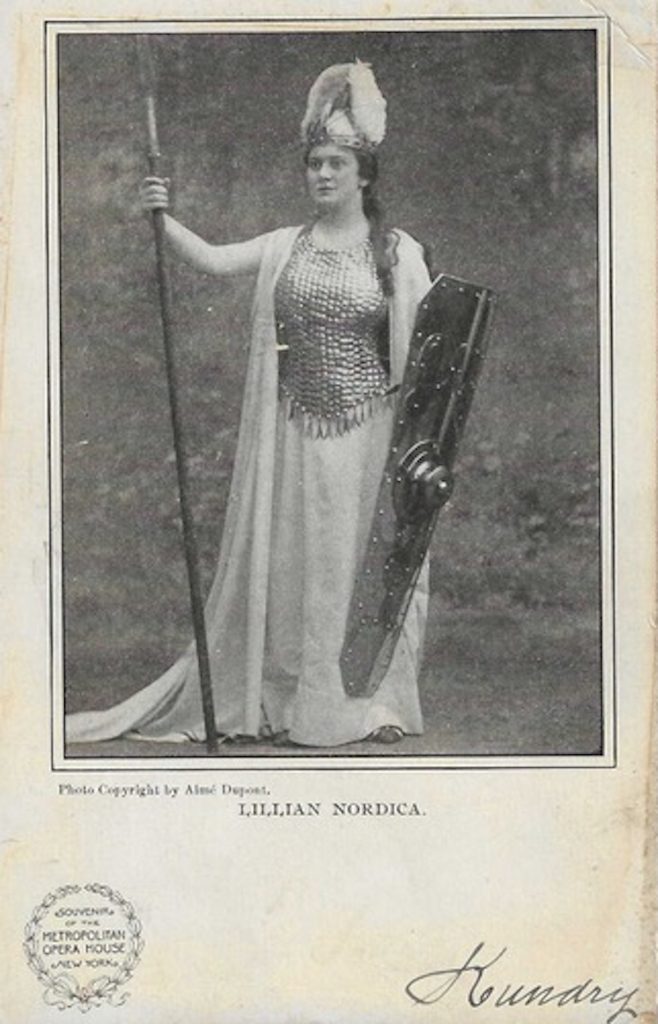 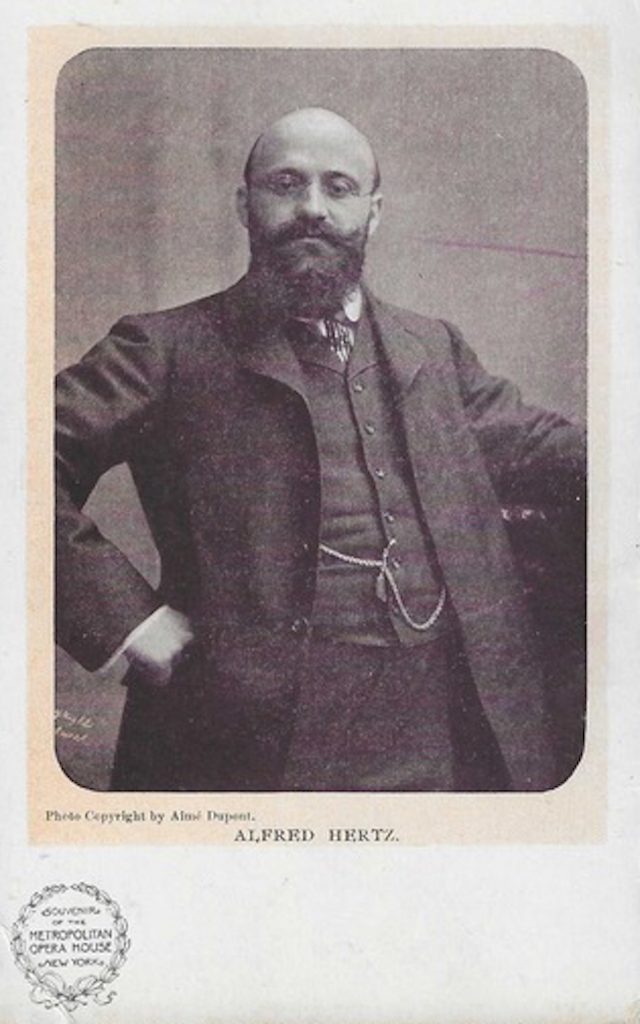 Other operatic postcards created in this extensive series based on photographs by the studio of celebrity photographer Belgian-born Aimé Dupont include soprano Lillian Nordica (dressed as Brunnhilde, a character in Wagner’s Ring Cycle) and conductor Alfred Hertz.

Postcards also figured in a controversy about the production of Richard Wagner’s masterpiece Parsifal at the Met. The composer’s heirs and artistic successors at Germany’s Bayreuth Festival of Wagnerian music wished to keep some works exclusive to the annual festival. They also shared the notoriously anti-Semitic Wagner’s disdain for Jewish musicians and conductors, including Maestro Hertz.

So, in true New York fashion, the Met sued and won. In 1903, following a court ruling that performances in the United States could not be prevented by Bayreuth, they put on the complete opera. Also, in true New York fashion, the Met promoted and boasted about the Parsifal production with a set of lithographic postcards, each representing a scene from the opera in magnificent Art Nouveau style. This was the largest postcard set ever produced by the Met to promote a single opera. 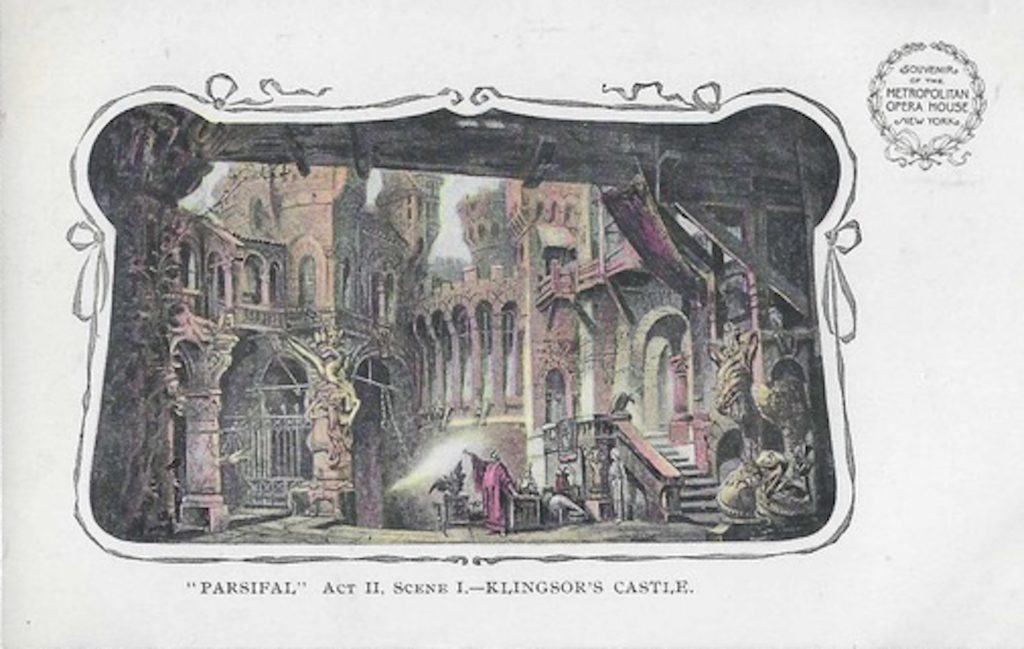 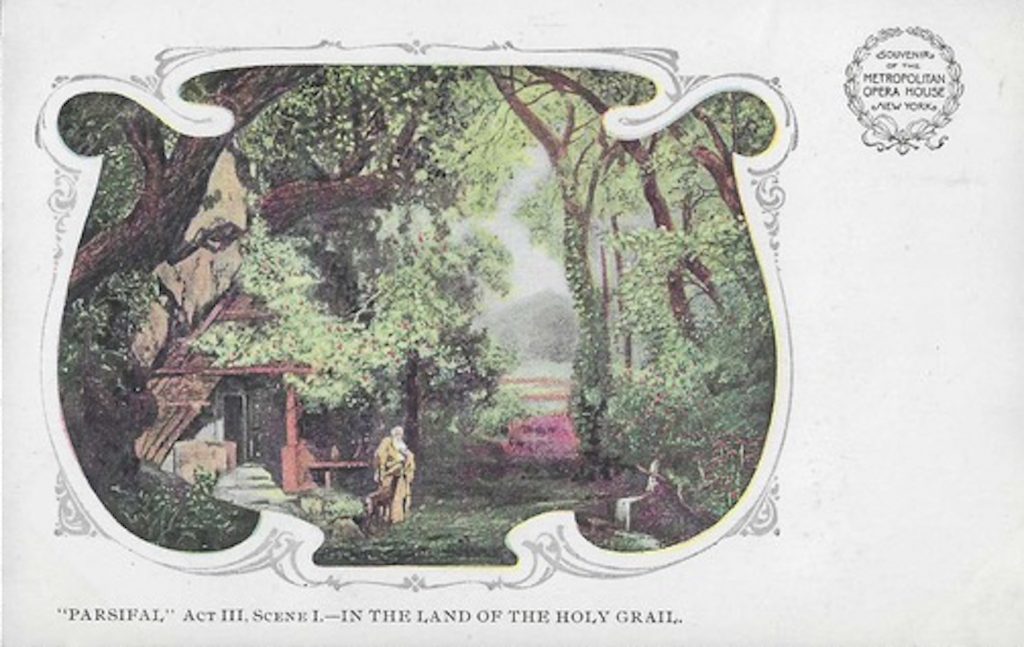 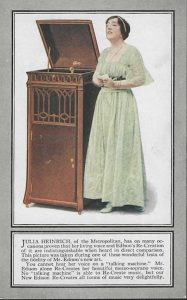 The Met’s performers were not only promoting 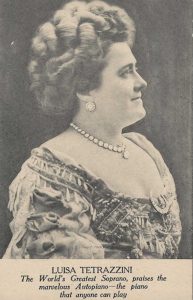 themselves and the company. Several singers were also induced in the early 1900s to serve as spokespersons for other music-oriented products. Julia Heinrich, for example, assured listeners that Mr. Edison’s “talking machine” could produce sounds identical to her own voice.

Similarly, Luisa Tetrazzini endorsed the Autopiano Player Piano on a postcard. However, the celebrated soprano, who famously feuded with Met management and only performed there for a year, is noted for yet another product. In San Francisco on Christmas Eve of 1910, the diva gave a public concert at Lotta’s Fountain attended by more than a quarter million people. Many considered it an affirmation of recovery from the earthquake of just a few years earlier. In her honor the nearby Palace Hotel created Chicken Tetrazzini, a cheesy concoction that until the era of calorie counting was one of the city’s signature dishes.

Opera was so popular in turn of the century New York that several venues competed against the Met as showcases for performances and performers. Oscar Hammerstein’s Manhattan Opera House was probably the most important of these as they were able to feature Luisa Tetrazzini for the bulk of her New York appearances. Other houses also used postcards to attract fans.

One of the most important artistic sets issued at this time was by Leopoldo Metlicovitz, an Italian of Serbian heritage, working for the Ricordi publishing house in Milan. Metlicovitz, a protégé of Adolfo Hohenstein, created a 12-card set of Puccini’s Madame Butterfly in the “Stile Liberty” an Italian adaptation of Art Nouveau. Hohenstein had been hired by Ricordi – traditionally publishers of music and libretti – to start up a lithography business and get them into advertising via illustrations, posters and postcards. The business, which went from theatrical promotion to fashion and industrial products, was very successful both creatively and commercially. 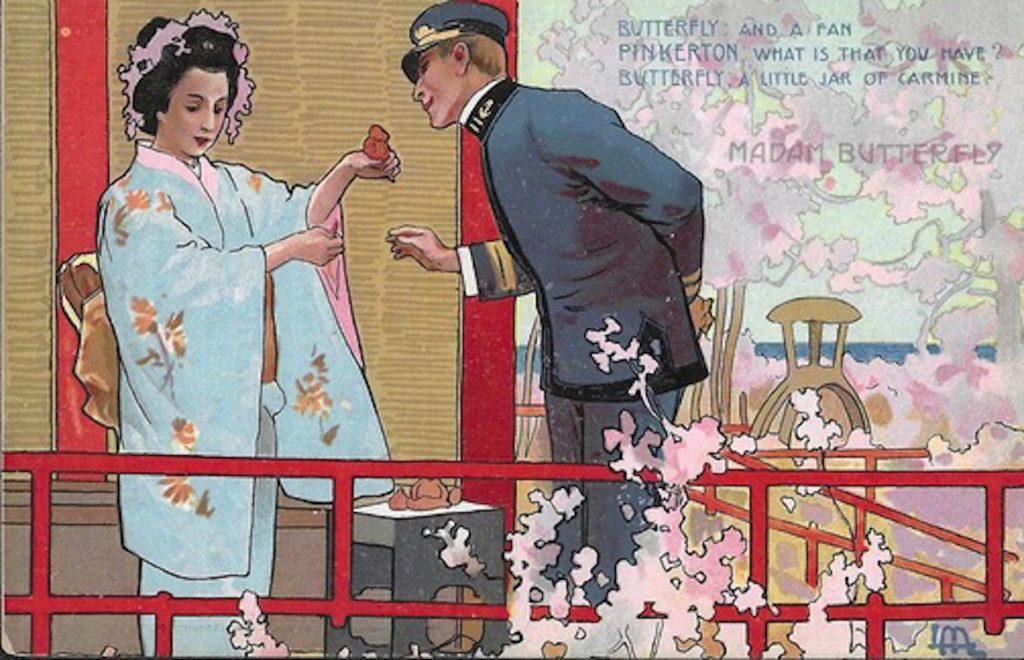 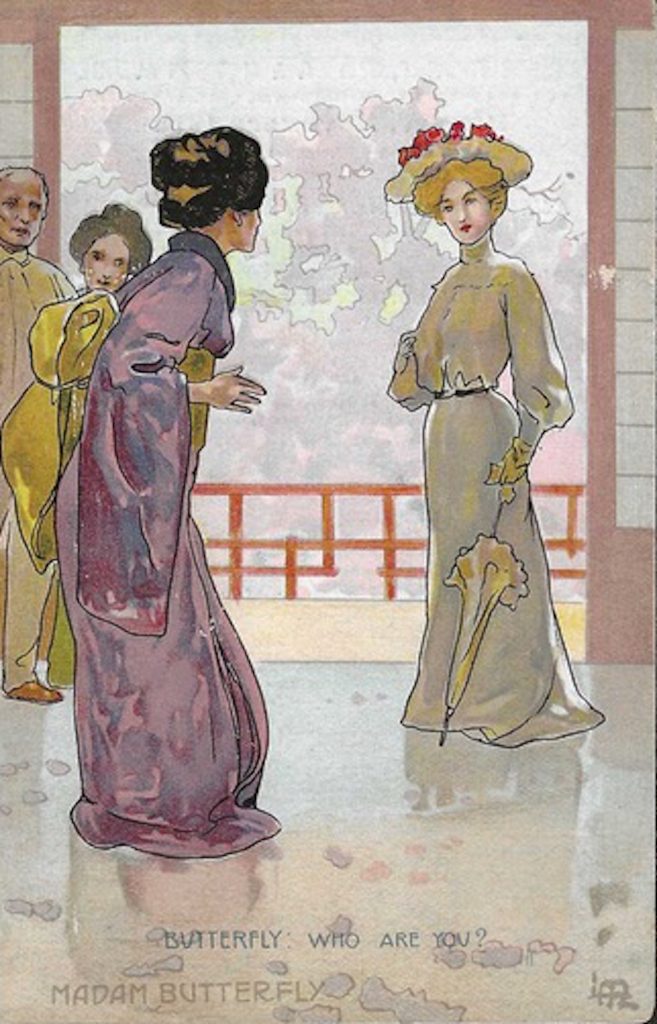 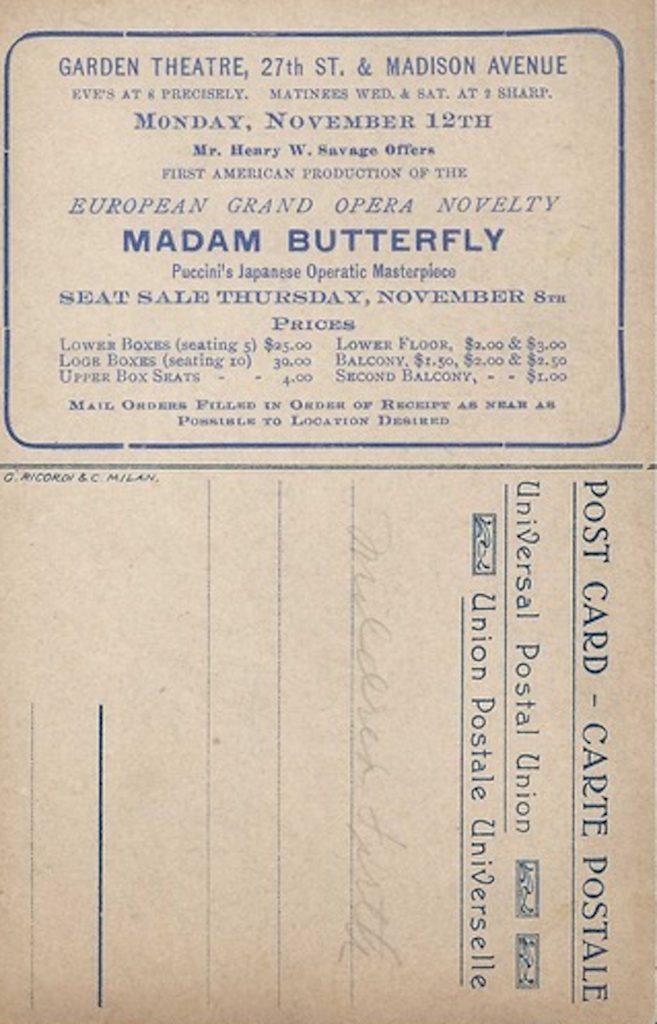 The venue promoted on the card’s verso is the Madison Square Garden Theater that had recently suffered a tragedy of its own. The theater had been the location of the murder of the building’s architect by the husband of his former lover.

Our final postcard artist of note is caricaturist Gianni Viafora, a friend of Puccini and the husband of soprano Gina Ciaparelli who performed the role of Mimi in Puccini’s La Boheme several times at the Met between 1907 and 1910. Viafora hosted and accompanied the Maestro during his visit to the United States in 1910 to help supervise the production of La Fanciula del West (The Girl of the Golden West) Puccini’s homage to America, its history and its diverse musical styles.

Two of Viafora’s caricatures are reproduced below: First, a dramatic recreation of tenor Alessandro Bonci performing the role of Arturo in I Puritani by early 19th century Sicilian composer Massimo Bellini. The opera describes how love survives despite the epochal battles between Roundheads and Cavaliers during England’s Puritan Revolution.

The final postcard below is Viafora’s caricature of soprano Geraldine Farrar as Madame Butterfly. In my entire collection, this card is my own #1 favorite. 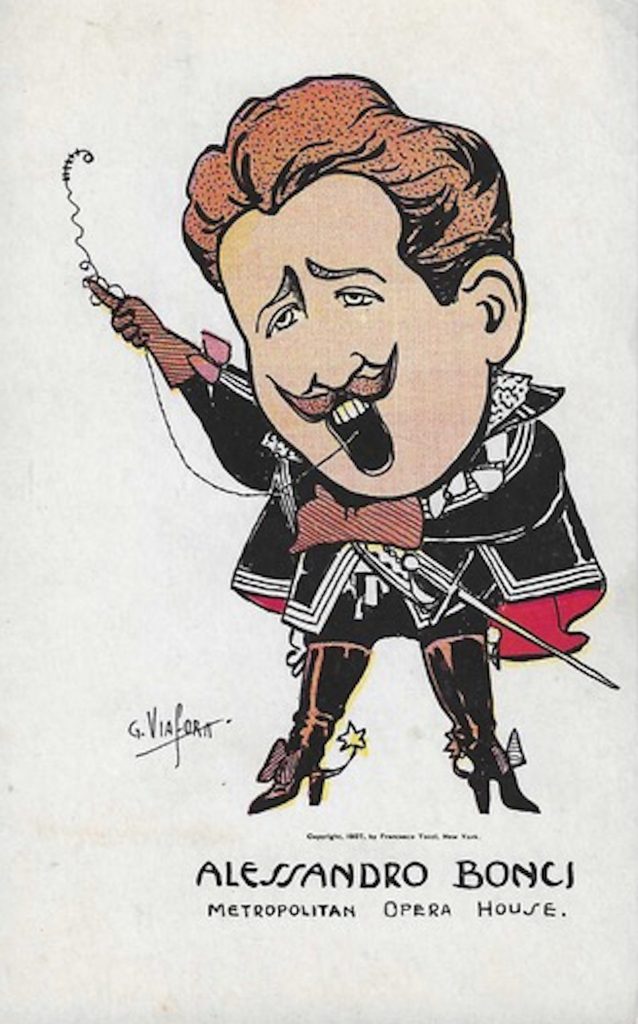 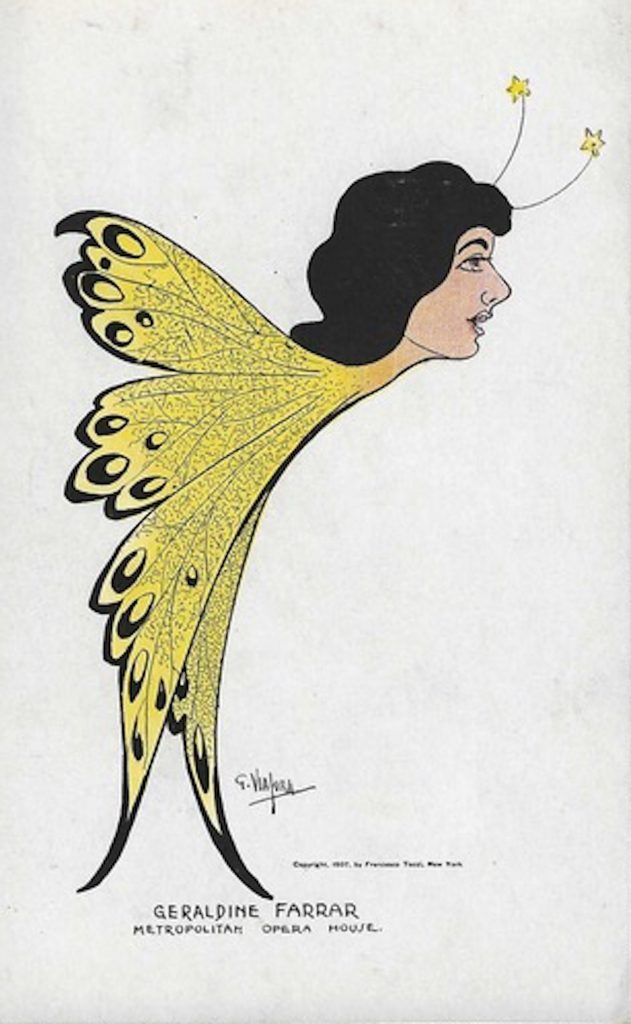 The first decade of the 20th century was an exciting time for opera but its corresponding postcard survivals show another side of the art form’s creative energy and sheer joy. They are worthy of further study and interest by collectors and opera enthusiasts.

Interesting article, particularly the social aspects, such as how the anti-Semitic feelings of Wagner’s heirs came into play. At the time, the idea of a white woman playing a Japanese role was obviously accepted.