Today, there are ten historically black colleges and universities in the state.  As a collector of North Carolina college postcards for the last twenty years, I have been able to find cards from all but one of the twelve schools. Some schools have produced dozens while others have only one or two.  Here, you will find a brief history of the schools and a card from each. 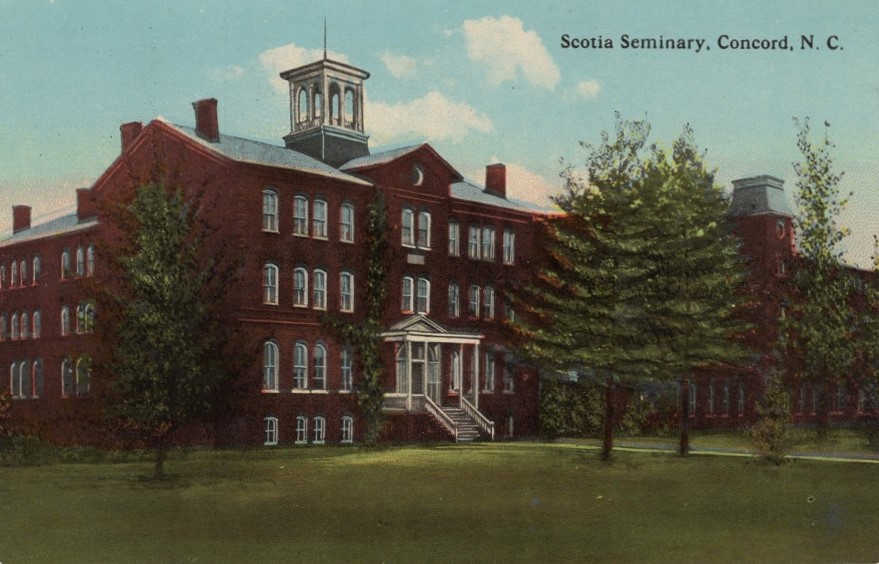 In 1867, Scotia Seminary was founded in Concord, North Carolina. The school was a preparatory school for young, newly freed African American women. The seminary became Scotia’s Women’s College in 1916 and expanded its curriculum.  In 1930, Scotia merged with Barber Memorial College and became Barber Scotia College.  In 1956, Barber-Scotia became co-educational and in the 2000s, it was accredited as a four year liberal arts institution.  Since its founding, it has been affiliated with the Presbyterian Church. 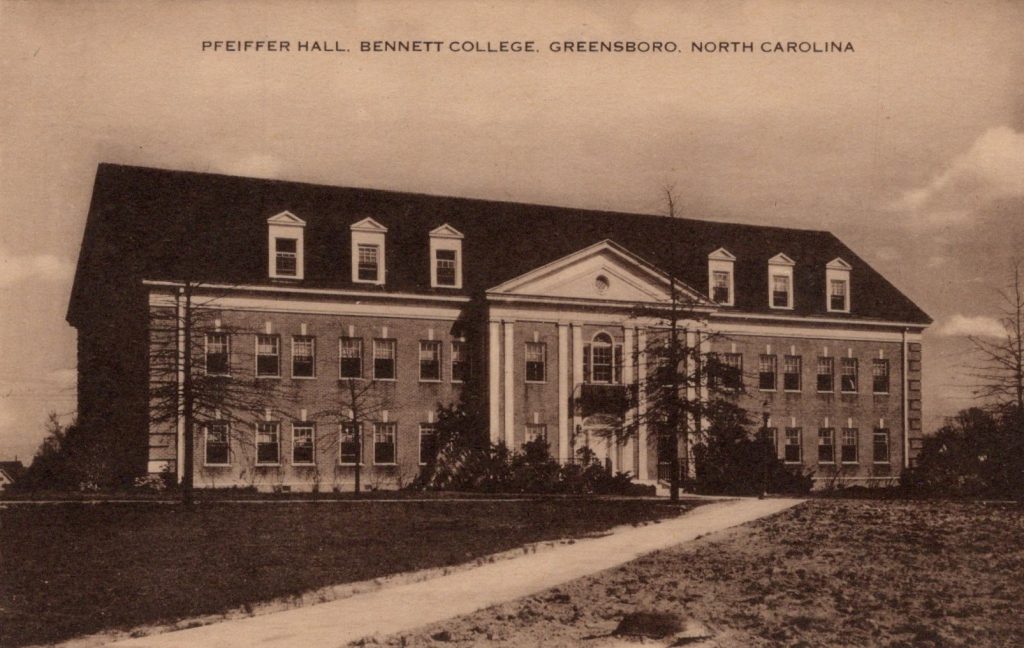 Bennett College was founded in 1873 by recently emancipated slaves. The first classes were held in the basement of St. Matthews Methodist Church in Greensboro, North Carolina.  The founders appealed for aid and received funds from the Freedmen’s Aid and South Educational Society of the Methodist Episcopal Church. Lyman Bennett gave the first $10,000 to purchase land and erect a lecture hall and dormitory. Thus, the school was named Bennett Seminary. In 1926, the seminary was reorganized as a college. Today, there are more than 40 buildings on a fifty-five acre campus.. 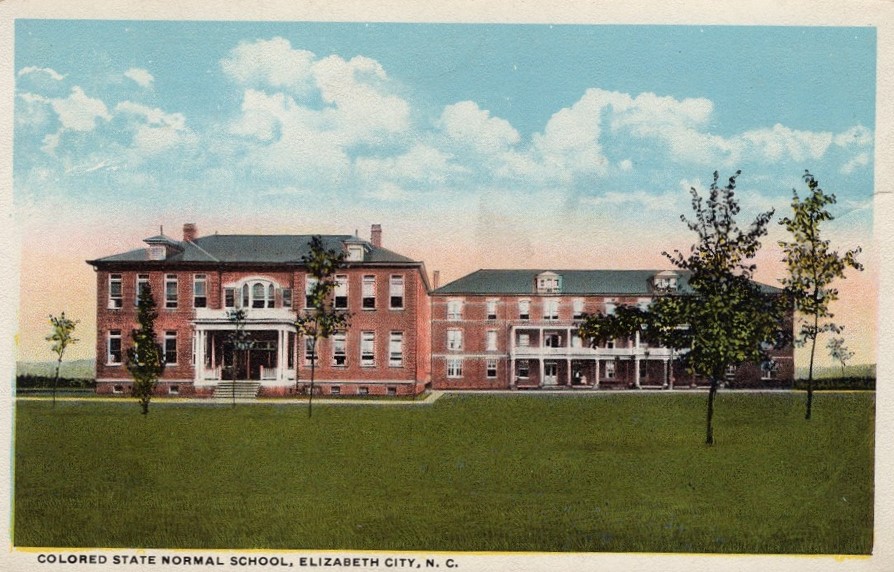 A state normal and industrial school was chartered in Elizabeth City in 1891. The school was chartered for the purpose of teaching and training teachers of color to work in common schools.  In 1930, the name was changed to Elizabeth City State Teachers College with a four year curricula.  In 1972, it became a part of the consolidated University of North Carolina system. 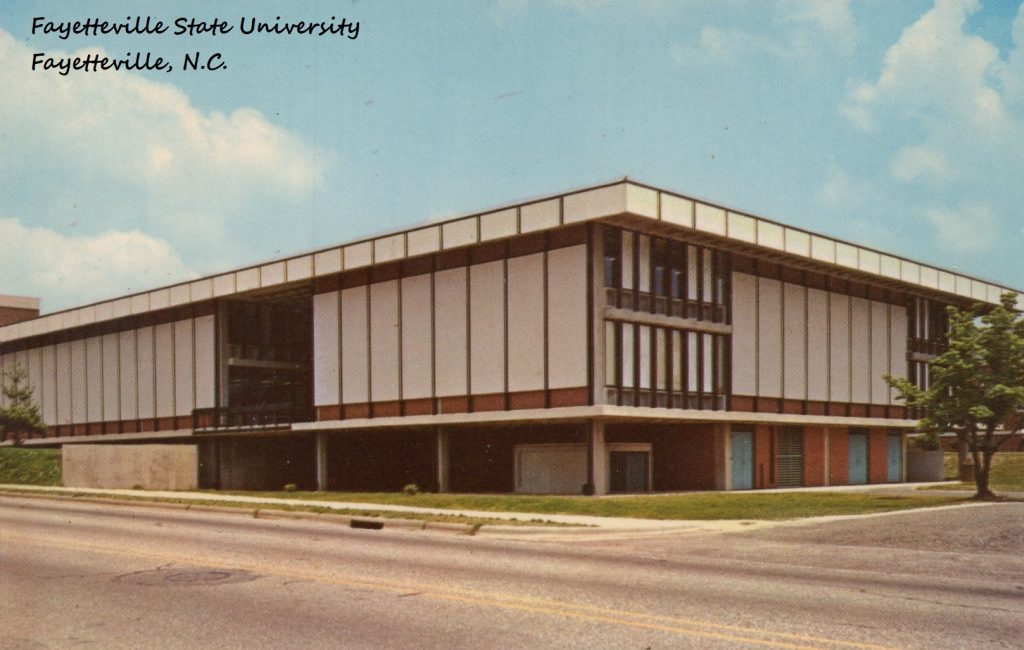 General O. O. Howard erected a building on the site and the school was named Howard School. Ten years later the state provided for the establishment of a normal school for black teachers. In 1929, all high school work was discontinued and in 1937, the state board of education designated it as a four year college. In 1969, the school became Fayetteville State University and a few years later became a part of the consolidated University of North Carolina system. 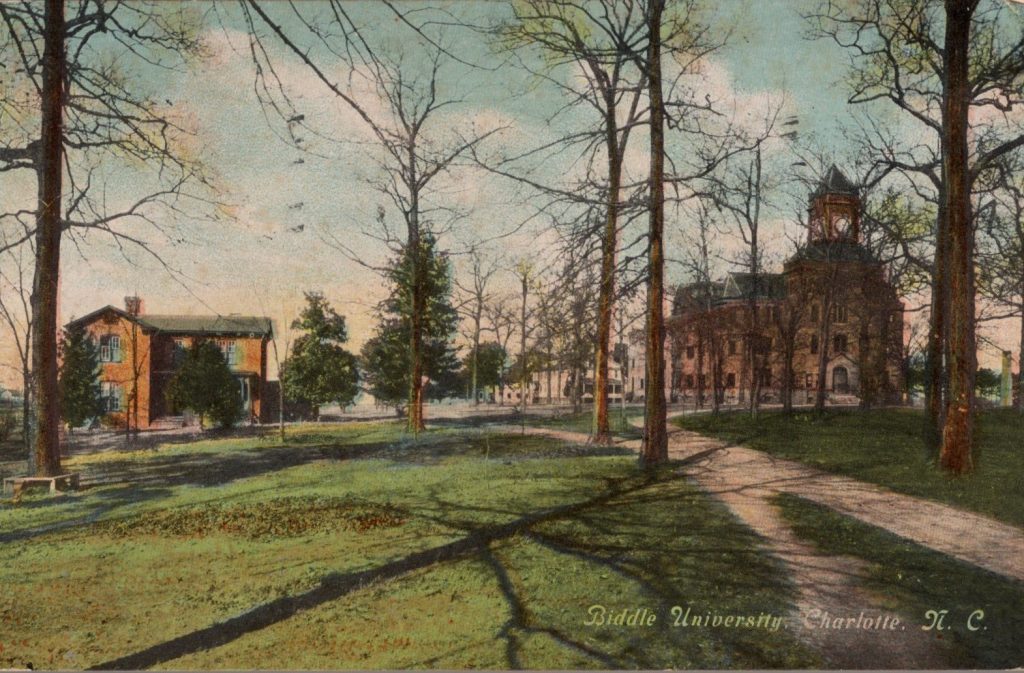 Two white Presbyterian ministers, one a previous slave owner and Confederate soldier, and the wife of a Union Major, Henry Biddle arranged the donation of eight acres of land in northwest Charlotte from Confederate Colonel William R. Myers in 1867. Then until 1923, the school was known as Biddle Memorial Institute, later Biddle University. In 1891, Daniel Sanders became the first African American to head the school. During the 1920s after a tragic fire, the school received $720,000 from Jane Berry Smith, the wife of a Pittsburg pharmacist, Johnson C. Smith, which prompted a name change to Johnson C. Smith University.  In 1932, women were admitted to the school and in 1994, Dorothy Yancey, an alumni from the school with a Ph. D. from Atlanta University was appointed the first female head of the school. During her tenure, she had a successful $50 million fund raising campaign. 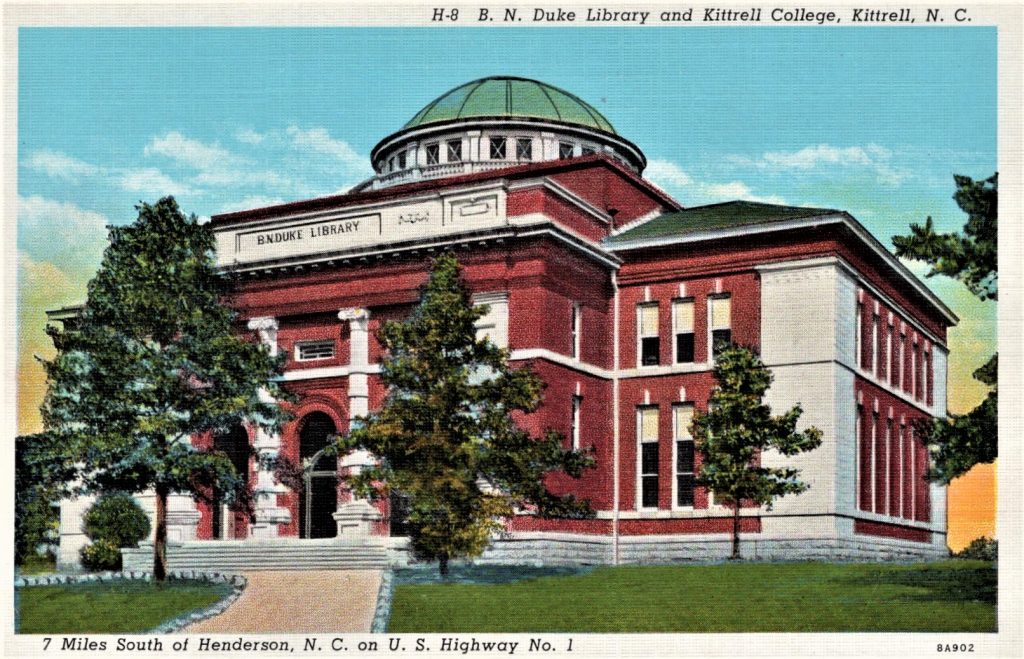 Kittrell College (1886) was established in Vance County, North Carolina by the African Methodist Episcopal Church. The school was a normal and industrial school to train African American male students. The original wooden building had been built as a hotel and resort before the Civil War and after the war it became a hospital, before being converted to a school. In 1926, the school bought four buildings from Trinity College with funds provided by Benjamin Duke. Three of the buildings were dismantled and moved to Kittrell. The college did not have the funds to move the fourth building. The B. N. Duke Library which was moved to the campus and some other buildings were destroyed by fire in 1972. The school was closed. 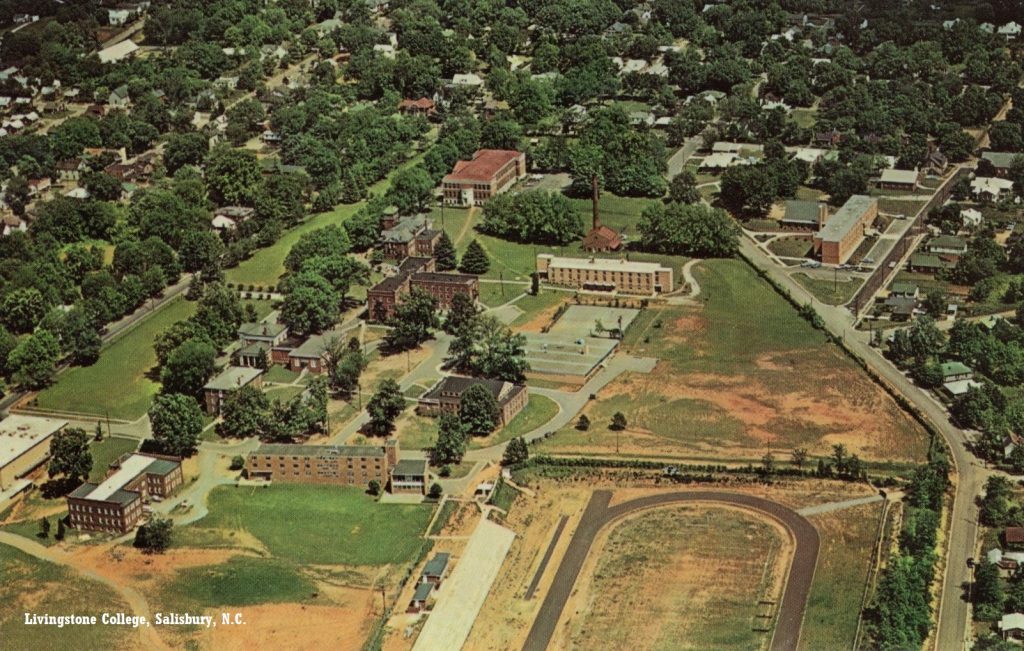 Livingstone College, named in 1887 for Christian missionary to Africa David Livingstone, was founded in 1879 in Salisbury, North Carolina by the African Methodist Episcopal Zion Church. Beginning with a single building on 40 acres of land, the school has grown to over 300 acres and more than 18 buildings. 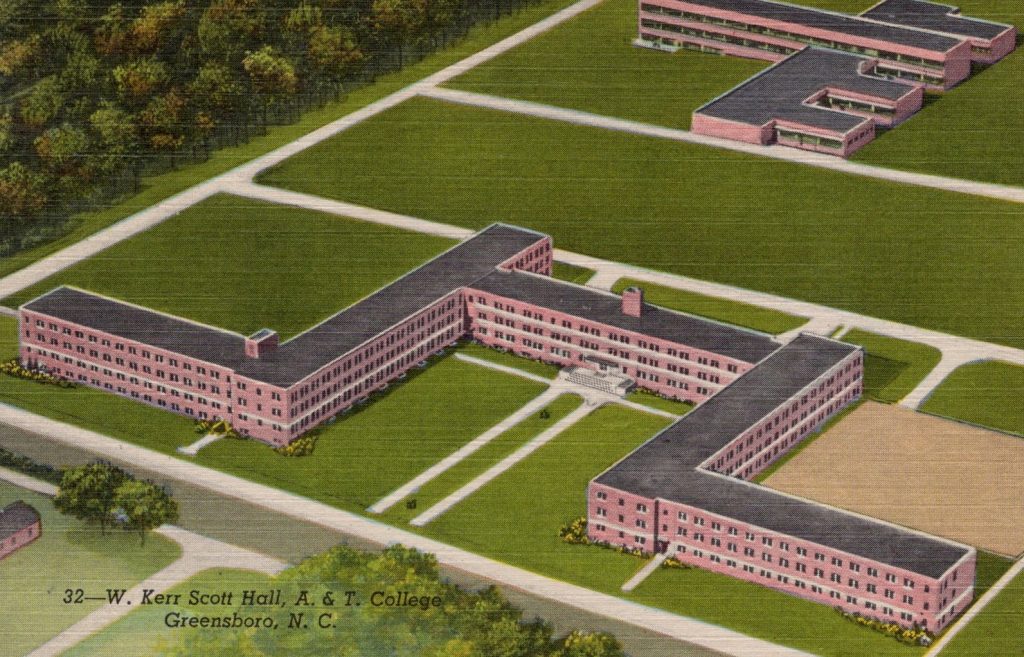 North Carolina A & T State U

The North Carolina Agricultural and Technical State University received its first funds in 1890 when Congress passed the Morrill Act that provided for bi-racial school systems. The white school was ready to open in Raleigh, so the state opened a temporary facility at Shaw University. The next year a group of interested individuals donated fourteen acres of land for the site as well as $11,000 to aid in facilities construction. The first buildings were completed in 1893. The first graduates with Master of Science degrees came in 1941. They opened a nursing school in 1953. Today, the school is part of North Carolina University system with over 13,000 students. 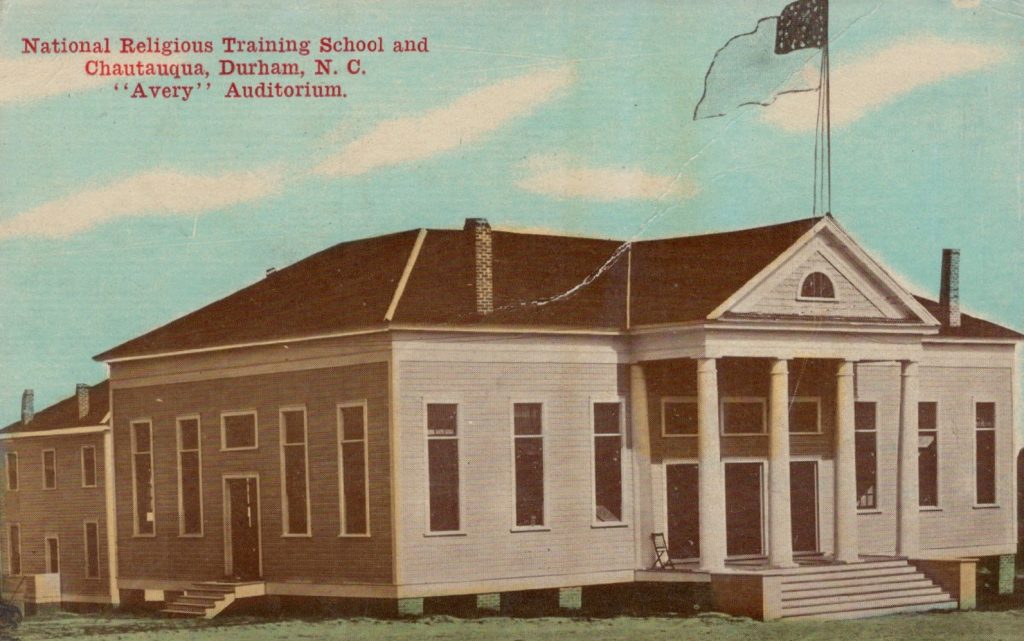 In 1909, the National Religious Training School and Chautauqua opened its doors in Durham. The school struggled in its early years operating only on private donations and student fees. In 1915, it was reorganized and became the National Training School. The North Carolina General Assembly appropriated funds for the purchase and maintenance of the school in 1923.  In 1925, the state renamed it the North Carolina College for Negroes and intended it as a liberal arts college dedicated to preparing teachers and principals. 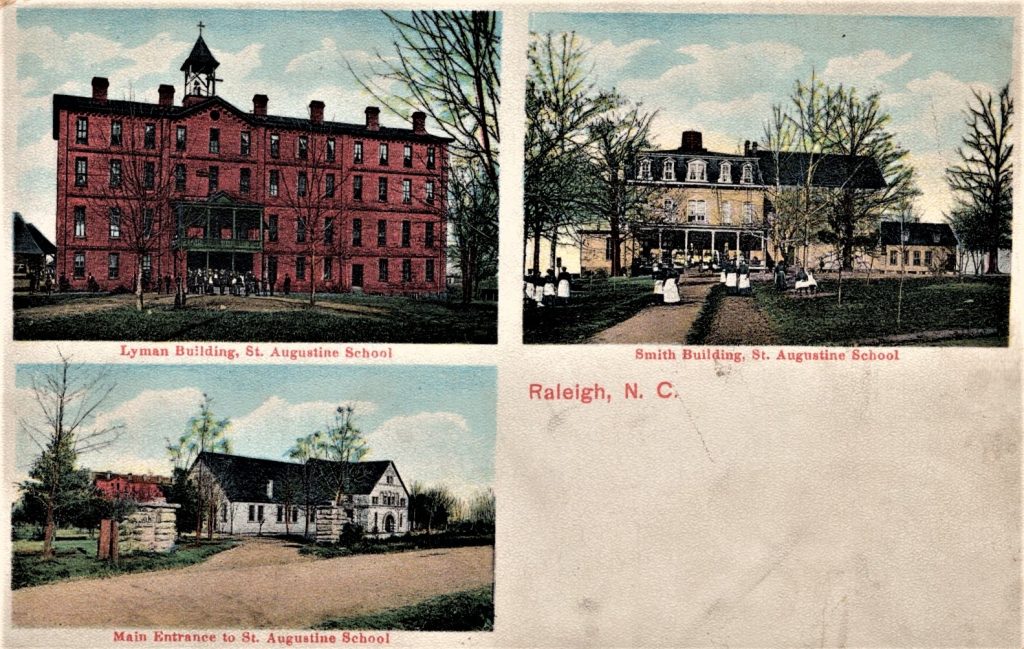 The Saint Augustine Normal School began operating in Durham in 1868 in a building owned by the U. S. Freedman’s Bureau. Before the year was over, the school moved to a new facility built on land previously owned. By 1907, they received regular support from the National Episcopal Church. By 1928, Saint Augustine had become a full four year college.  The college has continued its association with the Protestant Episcopal Church and is known today as Saint Augustine’s University. 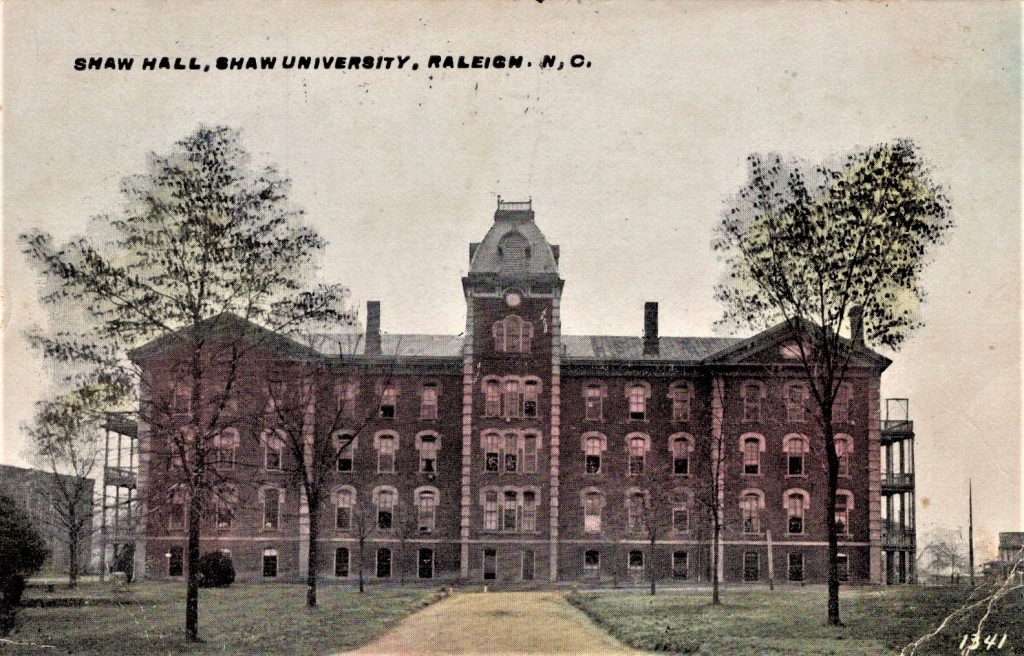 Shaw University was the first African American institute of higher learning in the South. The school was founded in 1865 by Henry Martin Tupper from Massachusetts. First known as the Raleigh Institute, later known as Shaw Collegiate Institute in honor of Elijah Shaw, a major benefactor. They also receive support from the Baptist church. Shaw University graduated its first college class in 1878; its first medical class in 1882; its first law class in 1890 and its first pharmacy class in 1893.  Today, the campus occupies 15 acres in downtown Raleigh.

Tony Crumbley has been a collector of stamps and postal history since childhood. He has authored numerous articles over his career as a philatelist. He is the current Co-Editor of the North Carolina Postal History Journal, a job he has had for over 25 years. He is a General in the Civil War Philatelic Society where he served as president. He lives with his wife, Renea, in Charlotte, North Carolina, and is the retired Vice President of Research for the Charlotte Chamber of Commerce.
PrevPreviousHomes of Our Presidents -Part Six of Six – George Washington
NextBill Ward and his World of Words and NotesNext
6 Comments
Oldest
Newest Most Voted
Inline Feedbacks
View all comments
Bob Kozak

Postcards relating to African-American institutions such as colleges, hospitals, schools and churches are rare. I suspect most postcard publishers ignored these institutions. I post on the Facebook page, Old Images of Richmond. The postcard of Virginia Union University is from my collection. 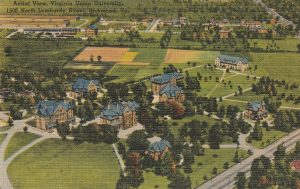 I enjoyed very much reading this article and it is good that almost all of these universities may be found on a postcard. Thanks for sharing these.

What a beautiful website! I love the postcards and the history. I recently purchased a postcard sent in the early 1900s to someone at Kittrell College. I wanted the postcard because I have revived Kittrell College, and I plan to continue the mission of this once-grand institution. Kittrell College’s mission is lost no longer, and its legacy is living on. I am prayerful that it will be restored to full HBCU status. Regardless of this status, however, the new Kittrell College will have HBCU style! May grace and peace abound in our lives.

Thank you for this information. Sharing facts are so important. Hopefully, young people will read, and start researching on their own.