Ron Chernow, the American historian and biographer has done some pretty nifty research and written some very successful books. He has written about Ulysses Grant. His biography of Alexander Hamilton inspired the Broadway smash, Hamilton, and his biography of George Washington won a Pulitzer Prize.

I tell you this so I can take a short cut. If you want to read spell-binding history find Chernow’s books and believe every word. You could win a whole week’s worth of Jeopardy contests by remembering what you learn from his books. One brief tidbit gleaned from Chernow was that nearly 900 books have been written about George Washington. This fact alone suggests that nothing new can be presented here.

Now that the history of the man and his presidency are on your bookshelves or may be soon, today an examination of his home and the postcards of Mount Vernon will be our exclusive topic.

It may surprise some to learn that Mount Vernon, has not always been Mount Vernon. The original name of the property was Little Hunting Creek Plantation. In 1726 when it was named so, George Washington’s father bought the land and built a one and a half story house. In 1740 the house was passed to George’s half-brother Lawrence who renamed it Mount Vernon after an English admiral he admired – Sir Edward Vernon. 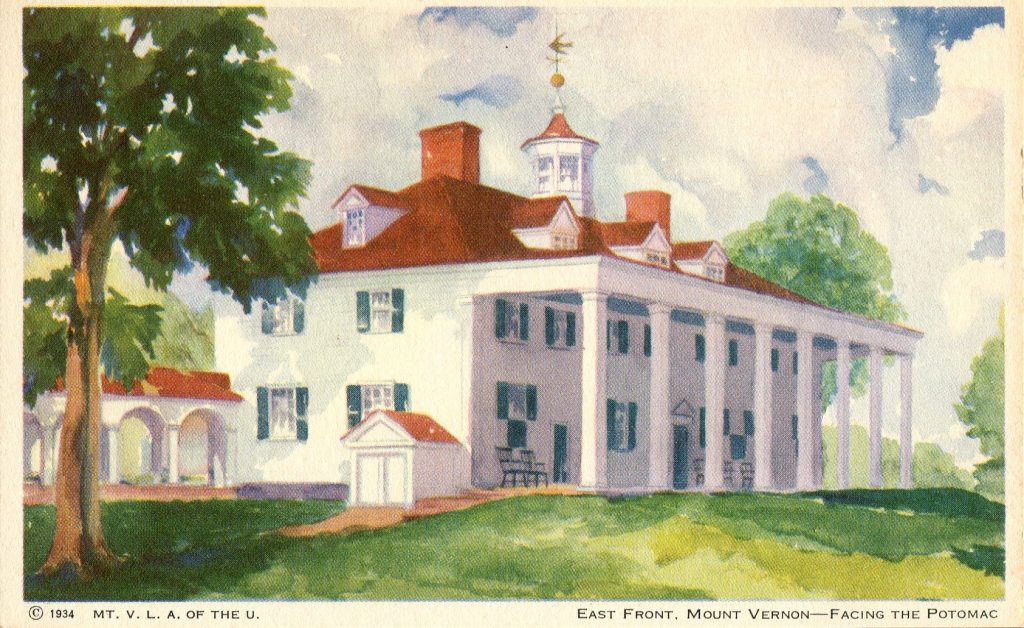 This card from 1934 is undoubtedly the most common Mount Vernon postcard of all time. It shows the east front of the main house: the Potomac River side. The colonnade is prominent, as are four of the seven dormers, and the cupola.

Since early in 1853 the property that was once the residence (after 1759) and inherited home (in 1761) of George Washington has been owned, operated, and maintained by the Mount Vernon Ladies Association. They purport to be the keepers and preservers of the home and tomb of America’s first First Family. 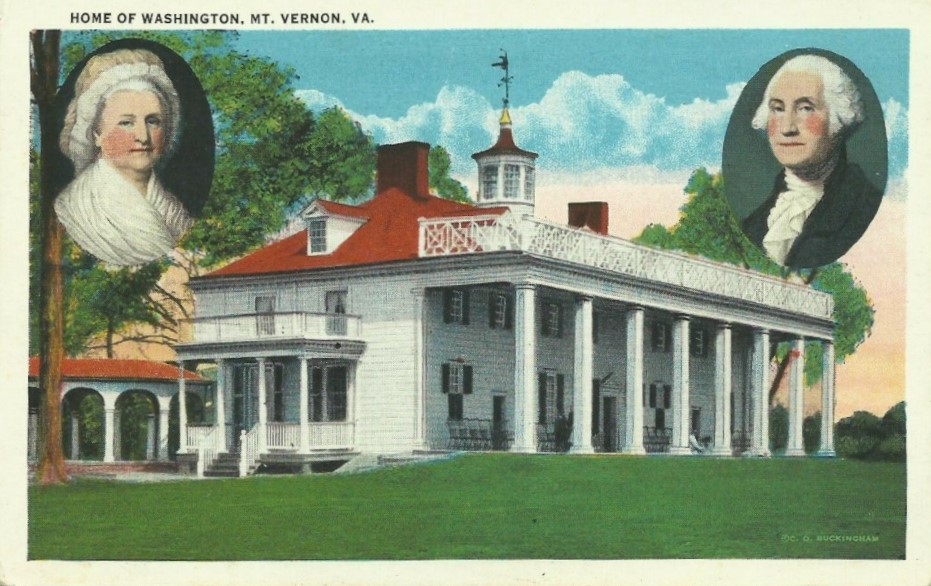 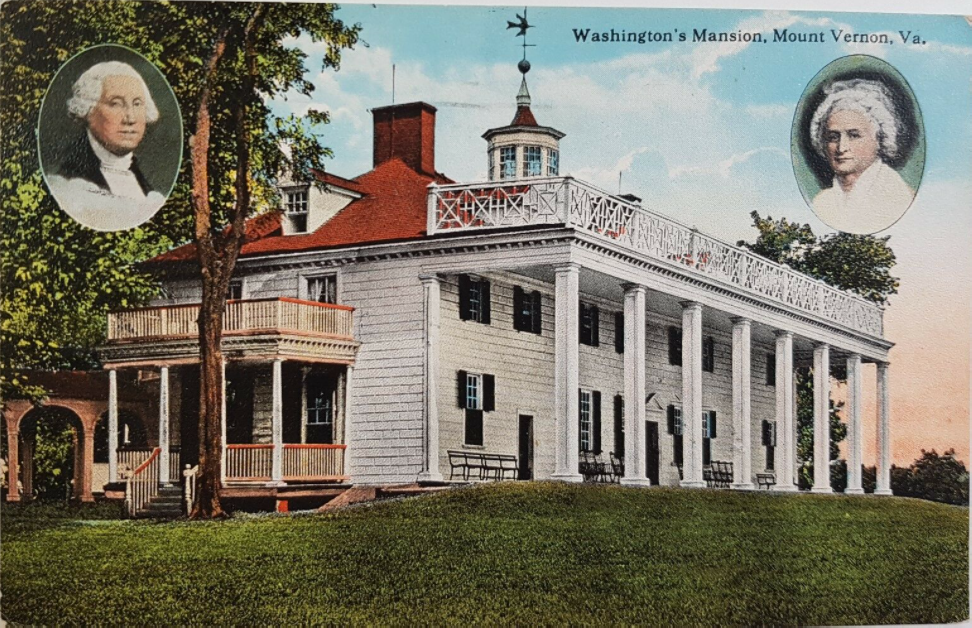 Until his death in 1799 Washington himself was the driving force at Mount Vernon. He had been taught that his high social status required an elegant home. With that in-mind his self-determination was enough to invest a near fortune in upgrades and renovations of his home into an 11,000 square foot estate with more than twenty rooms and at least twelve ancillary structures.

The walls at Mount Vernon appear to be masonry construction but are in fact wood. The very expensive process used in Washington’s renovation was called rustication. It was a technique done by bevel cutting a board, that was then sanded and wet-painted to render a stone-like texture.

Additionally, Washington worked equally hard on his estate gardens. He increased his land-holdings to nearly 8,000 acres that included four utilitarian gardens. The lower garden was the kitchen garden where fruits and vegetables for the family grew throughout the year. The upper garden was recreational and intended for guests to walk and enjoy the sweet aroma of fruit trees and flowers. There was a greenhouse and a botanical garden behind one of the work sheds where imported plants grew and were tested for potential money-making crops.

One function of the Association is their diligent promotion of the property through postcards. The image above and several similar ones have been completed by worthy artists in their time, F. J. Mayfield, Frederic Dalrymple, Elizabeth O’Neill Verner, and others. 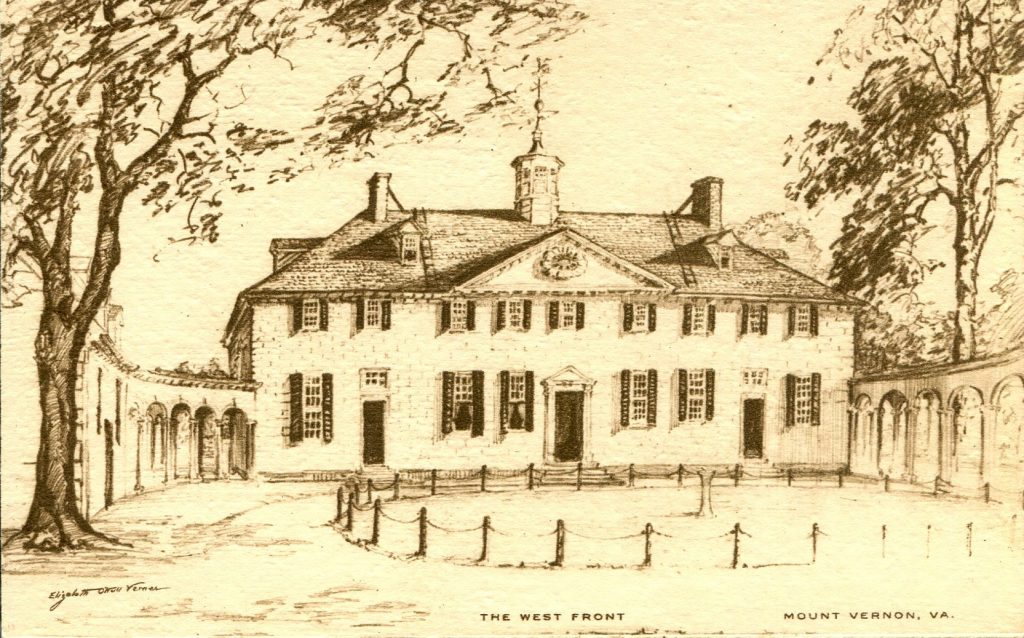 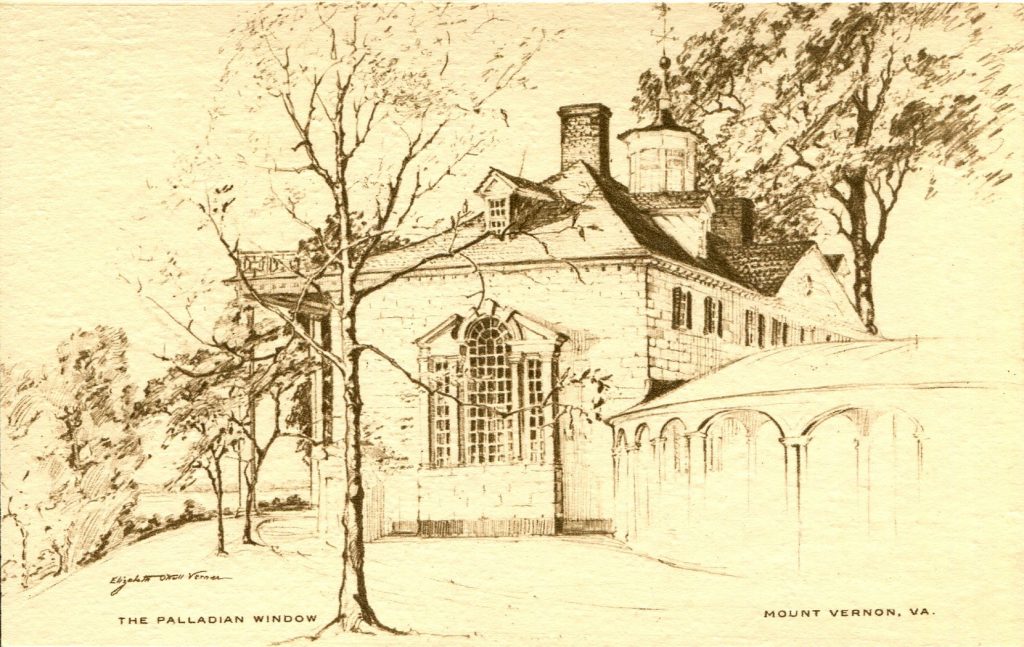 The Palladian Window in the North Wall 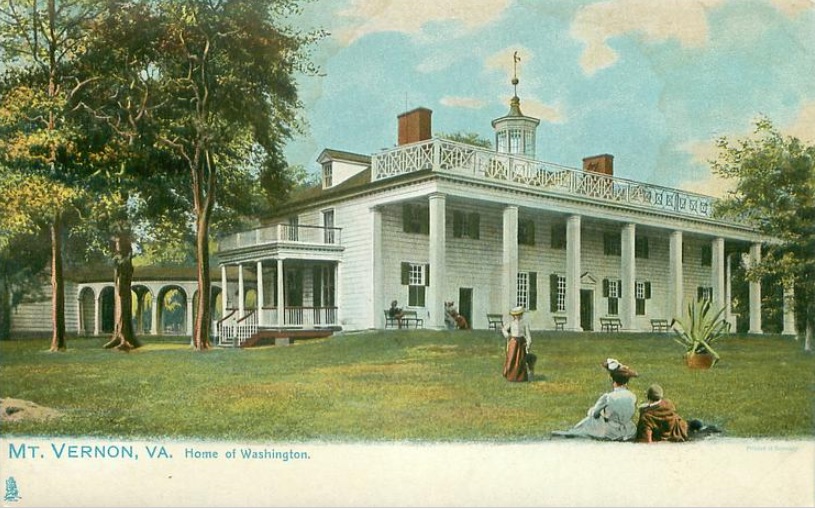 From Tuck’s Landmarks of Virginia series 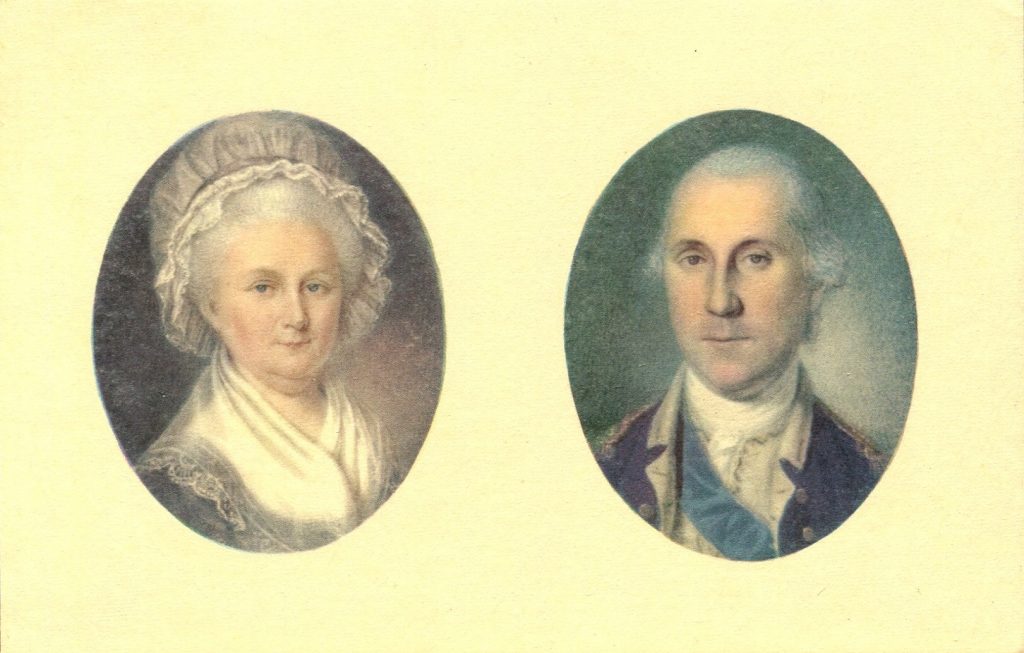 Thought to be rare, but only because none other like it has been found, this is one of the Ladies’ Association’s “authorized” post cards. It features miniature portraits of the Washingtons by Charles William Peale and his brother James. The portraits on this card are displayed at the Mount Vernon museum. 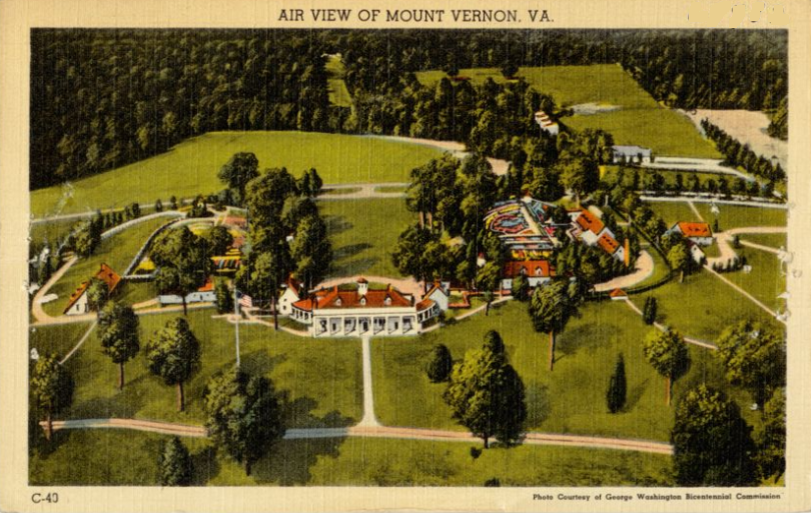 An aerial view of Mount Vernon, published by Tichnor Brothers of Boston, may help in developing a spatial concept of the property. The East Front of the main house is easily recognized. This image was probably developed from a photo taken from over the Potomac River. 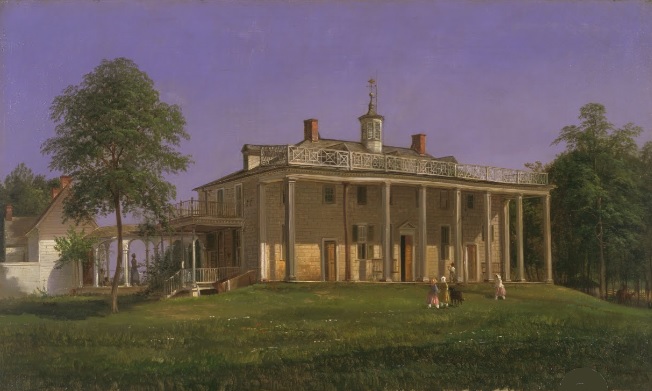 One unaffirmed circumstance that surrounded Mount Vernon was that it faced potential destruction during the American Civil War. It is thought that a bilateral agreement among unknown conciliators declared it neutral ground – the only so designated property south of the Mason-Dixon Line.

The Staff of Postcard History offers this article for your enjoyment. It is a combined effort of many: our publisher, editor, webmaster and collectors/contributors far and wide. Please use the COMMENTS feature below to let us know how we're doing.
PrevPreviousThe Ripon Hornblower
NextHistorically Black Colleges and Universities in North CarolinaNext
3 Comments
Oldest
Newest Most Voted
Inline Feedbacks
View all comments
Bob Kozak

In 1794, Washington wrote that he had “no objection to any sober or orderly’s person’s gratifying their curiosity” by touring the estate. Obviously presidential security was less of a concern then.

I’ve been to Mt Vernon. Crowded as heck. Just stick with the postcards!