Ripon is an attractive small city in Yorkshire, England, wrapping itself around its ancient Cathedral. 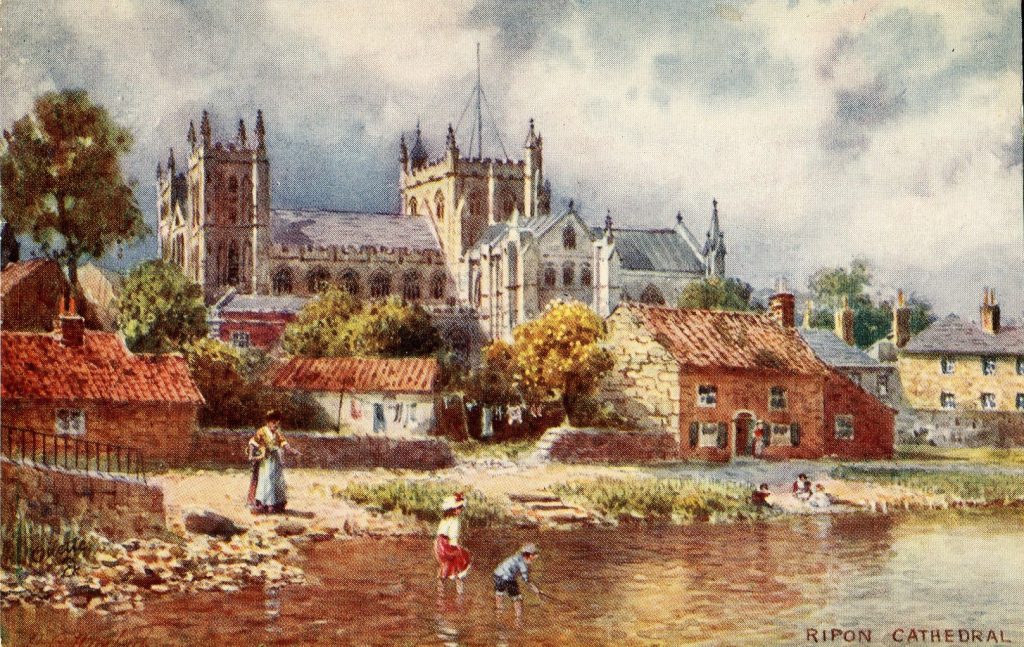 In 886 AD King Alfred presented the City of Ripon a charter in the form of a horn. Since then, and certainly for over 500 years without a break, each evening at nine o’clock a horn is blown four times in the Market Square.

The purpose was to set a curfew watch for the safety of the city.

The names of Hornblowers are known from 1813. Ye Olde Horn Blower John Simmons is seen on this card from an era after the divided back arrived in 1902. The photo was taken in 1886 when Ripon celebrated 1000 years of its charter. Hornblower Simmons died in 1887.

The costume is designed to be medieval and was made especially for the 1000-year four-day celebration.

Each night, John Simmons, as all subsequent Hornblowers, wore a tan coloured frock coat with a black tri-corn hat. The postcard was published by a local producer, Wright and Co.

Notice the caption states that in those days the horn was blown at the Mayor’s house first and then in the Market Square.

By the First World War the visitors from Harrogate who came to watch the ceremony needed to know the exact time to arrange for their return train-trip home. With that the order of blowing was reversed and the Market Square was guaranteed to be at 9 PM. 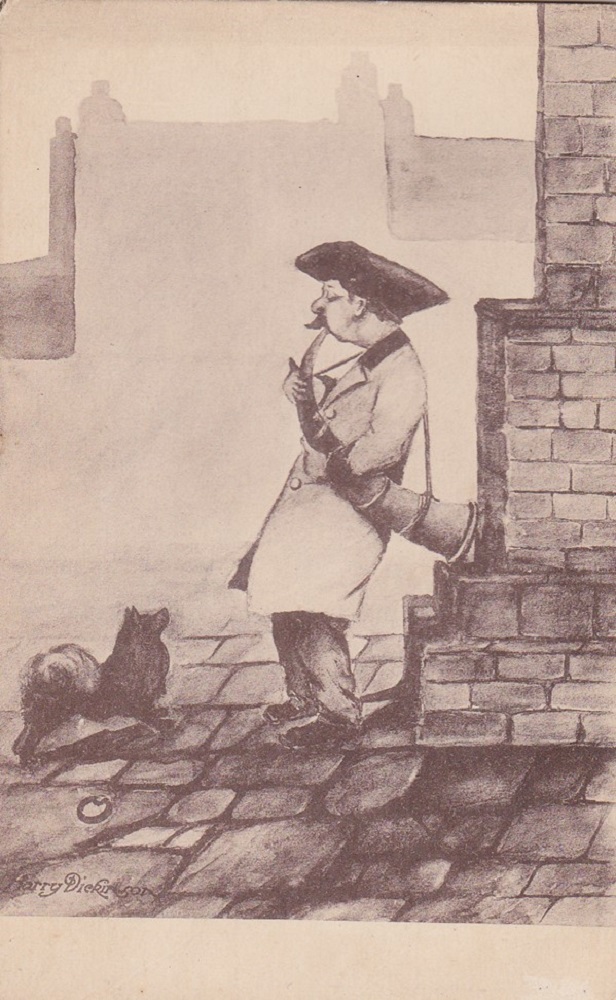 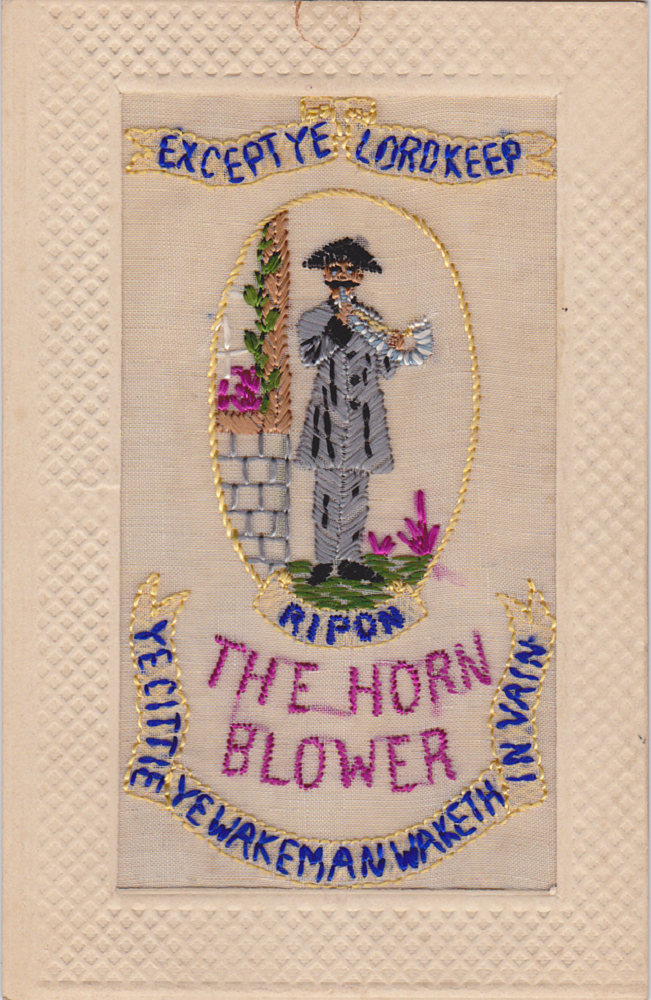 Ned Heward, seen in the cartoon drawn by Harry Dickinson, was well known to enjoy his beer and so consequently might struggle to get four satisfactorily long blasts of the horn. A story is told that one night there was an extreme fog, so thick in fact that you could hardly see your hand in front of your face. At nine o’clock, at the first corner of the obelisk Ned blew the horn as best he could and was amazed that the echo came back to him straightaway. At the second corner the same thing happened. Again, at the third, so thick was the fog, that he heard the echo coming back even more loudly than before. At the fourth corner he bumped into his deputy who had been going round the obelisk in the opposite direction!

Ned blew the horn during the First World War and with his flamboyant moustache is easily recognised.

The silk card shows the moustache in all its splendour. Ripon has long had military connections with a large army camp on its outskirts. This may explain why so many postcards were produced in the Golden Age. This card by La Pensee, Paris, and similar cards were produced by the Inter Art Company, also in Paris, so they must have been in circulation before 1914 and the outbreak of war.

There are more postcards of Ned Heward (44 so far discovered) than any other Hornblower.

Harold Blackburn, who blew the horn up to and during the Second World War, has 34 different ones of him. He was the first Hornblower to start signing postcards for the crowds who still come nightly to see the living pageant. Being a Hornblower reflected something of a celebrity status. Sometime during his period of office, he began to wear white gloves as an addition to the costume.

Though the horn was normally still blown at nine o’clock, during winter months in the war years, the horn was blown at dusk in strict keeping to the blackout laws. On one occasion in 1939 when Harold was taken ill his 13-year-old daughter put on the large frock coat, the tri-corn hat, and went down to blow in place of her father.

The postcard of Harold Blackburn with the market in full swing behind him is rare. Clearly it is not 9 PM. So more commonly the background of this photo is taken out leaving Harold in a mist on cards printed using this photo. This card is by Photochrom and Co. of London and Tonbridge Wells. 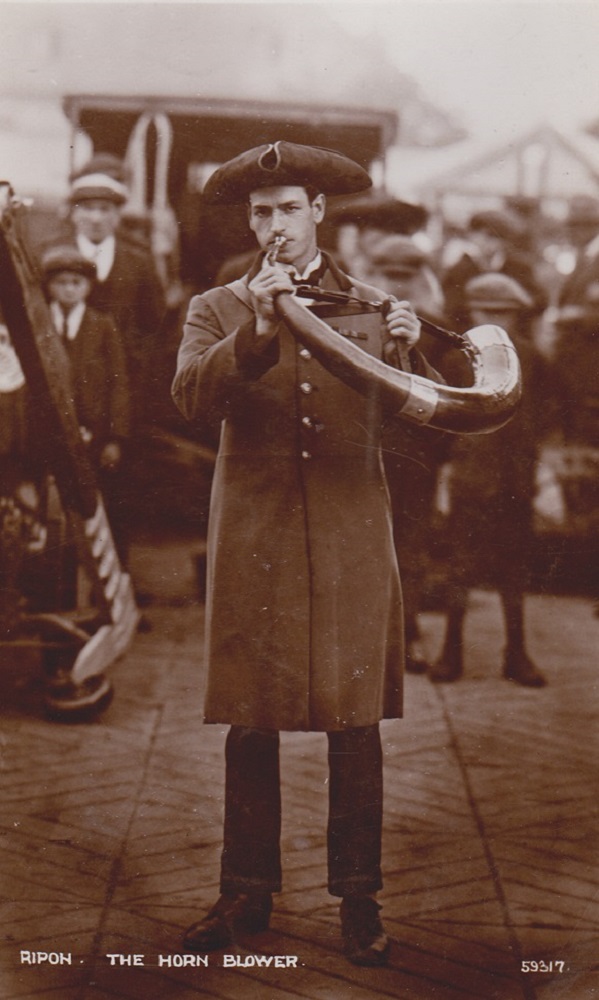 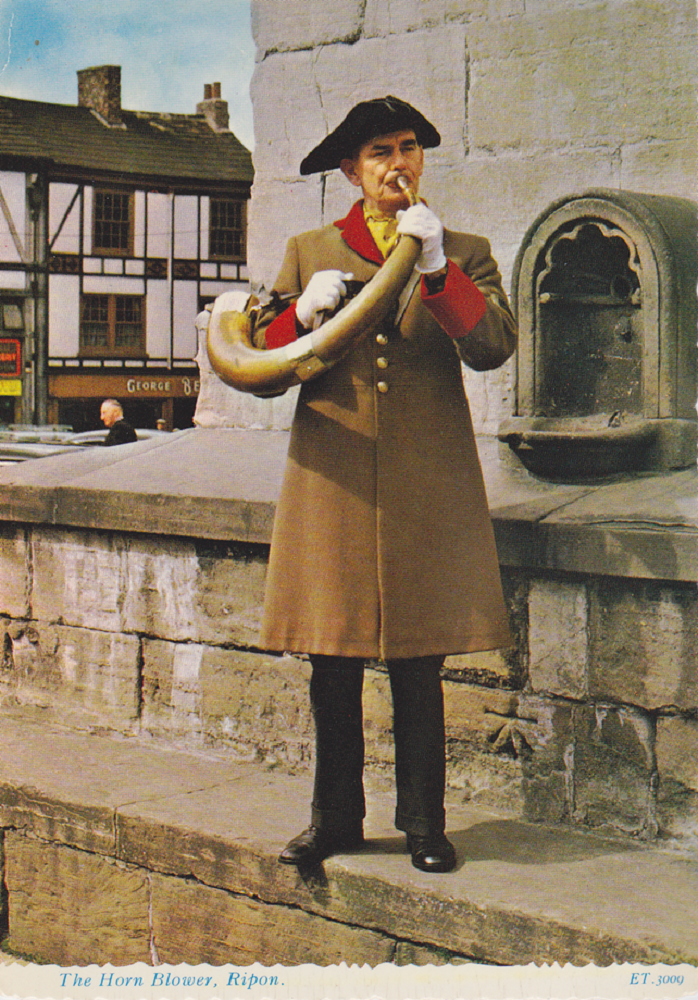 The first card produced in colour was the card of Cyril Hawley. His father had been Hornblower before him (one of three sets of father and son pairings in the last 200 years).

Cyril Hawley blows the horn left-handed as captured by this card printed by Valentine of Dundee and London. Valentine is one of the very few companies still in existence from the beginning of the postcard era that still produces cards today.

Cyril had a major controversy with the council over the safety of Hornblowing. He argued it was dangerous, with cars parking in the newly designated slots painted on the Market Square right up to the obelisk. Though the design of the slots was changed, it led to his resignation. Only half the square is designated for parking these days, so Hornblowing can continue without interruption.

Before colour photography of course there were hand tinted cards usually coloured in by young women. The photographer would take the shot in black and white, and an assistant would note the colours. Back in the studio stencils would be made and each young woman would take a colour to match her stencil.

One tip worth knowing was that a little bacon fat could be put on the back of the stencil to stop any wet paint from running. You would need to know this if you didn’t want the value of spoilt cards docked from your wages.

In the very latest round (2017) of new appointments, a woman, Allison Clark has been appointed as a Ripon Hornblower.

The nightly pageant is still as popular as ever. It continues, but I wonder, will it continue unbroken for another 500 years?

A great tradition in a time that lacks traditions, or that has traditions fading rapidly.

Yes. I live about 12 miles away from Ripon. I haven’t discovered ( to my shame) whether the horn has been blown during lock down for covid because the virus is air borne and to deter people gathering to watch it. Thanks for your interest, Juan.
Tony Shepherd

Ripon lent its name to the Wisconsin city in which the Republican Party was founded.

Hello , can you please tell me the name of this hornblower . 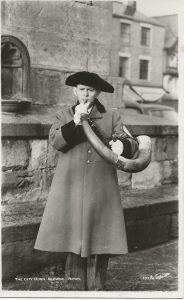