“I was born at mid-night in a snow-covered log-cabin in the woods of Vermont.

“My father told me once that the sky was so clear that night that when he went outside the heavens were lighted with fireworks, but the stars were so bright that it seemed like the fireworks never died away. Dad said that my being born on a starry night is likely the reason I was so interested in the stars. I think he was right.

“When I was seven we left Rhode Island. The family – my father, Edward; my mother, Elvina; and my brother Edward C. Hanson, Jr. – moved to Massachusetts so my father could take a new job at Tufts University. Sixteen years later, I graduated from the same University, a product of reduced tuition for faculty members’ children.

“The last two summers of high school and all four summers of my student career, I worked at the observatory at Blue Hill Reservation.” 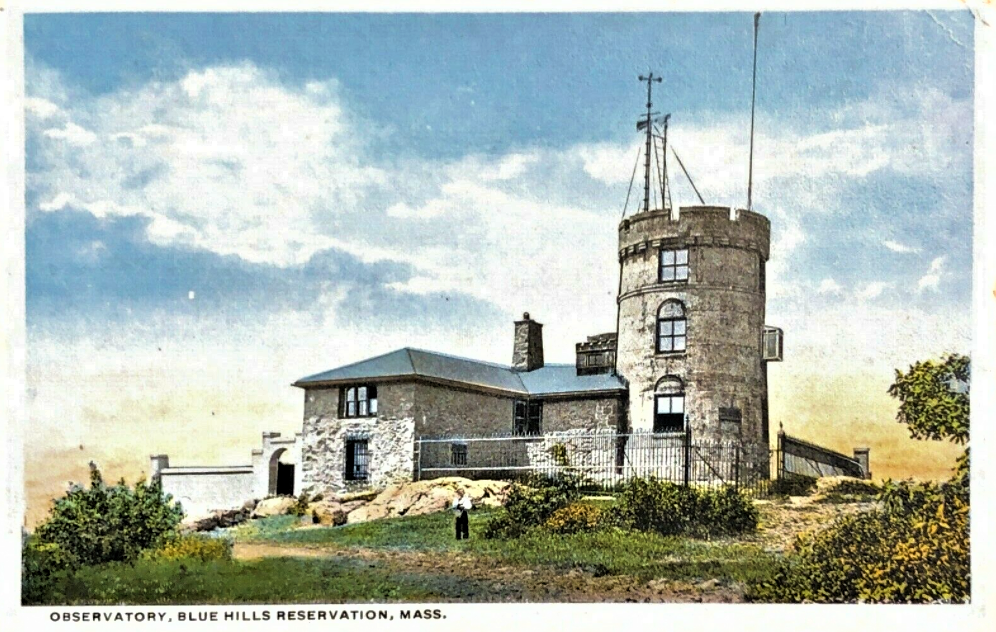 “It would be impossible for me to list all the reasons I liked my summer job. I think the main one is that I liked being up high. In fact the observatory at Blue Hill was the highest place in the reservation and you could see for miles. My second reason for liking my job was the weather. If you paid attention and learned what to look for, you could actually see the weather coming.

“The observatory was opened in 1885. Today it is the oldest weather station in America.” 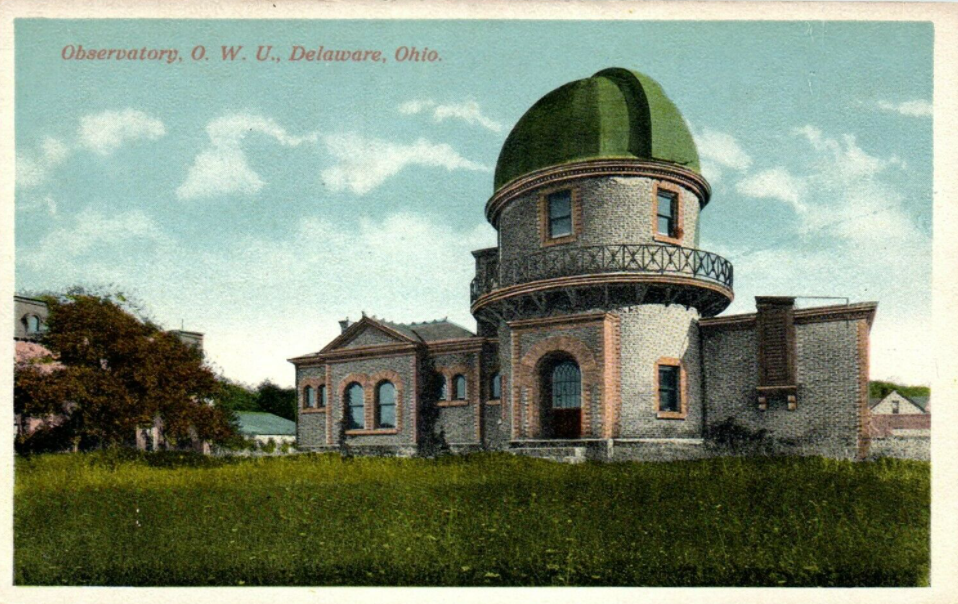 “When my father was a junior-year student in 1903 he took a class at his university with a man named Hiram Mills Perkins. He always said he had no interest in astrology [editor’s note: I am sure he meant, astronomy], but Professor Perkins was famous and he wanted to learn something from a famous man.

“The year that I turned eleven, my father took Eddie and me to visit some of his college friends in Ohio. It was a dreadful long ride from Massachusetts to Ohio, but when we got to my dad’s college there were so many wonderful things to see and do that Eddie and I forgot about how much of our summer vacation we missed at home.

“That was the place. On the campus of a college in Delaware, Ohio, that I learned that someone on earth with a great-big telescope can see the stars. I’ll never forget that day.

“The first time I saw a star through a telescope was in the observatory at Ohio Wesleyan University. I was eleven years old and I was forever captivated by what my father always called “things over my head.” 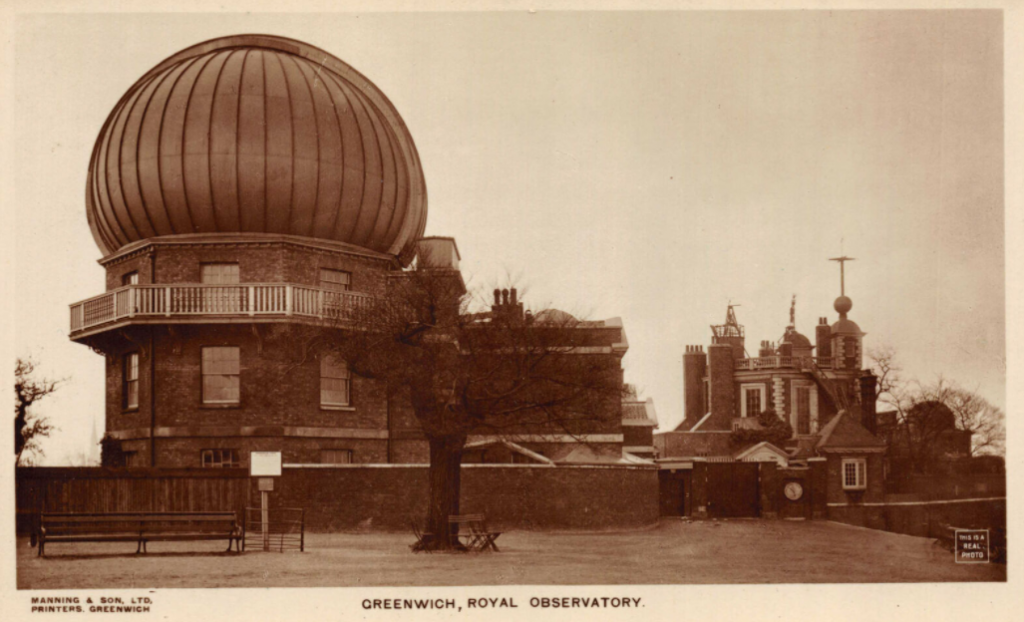 “Greenwich, England. They call it ‘gren itch.’ There are several cities named Greenwich. There at least five or six in the USA, one or two in Canada, there are also places named Greenwich in Australia.

“While I was still at university, my father asked me one day if I cared to go on a trip with him. I asked where and he said that Mom and Eddie couldn’t go so would I go with him to Greenwich, England. He had business to attend to in London and I could visit the observatory if I wanted. By that time everyone knew how much I liked observatories.

“It was the best time ever. Especially when two days before we expected to return home, my dad announced that further business had come-up and we would have to go to Liverpool for three days. I went crazy. There’s an observatory in Liverpool, too!” 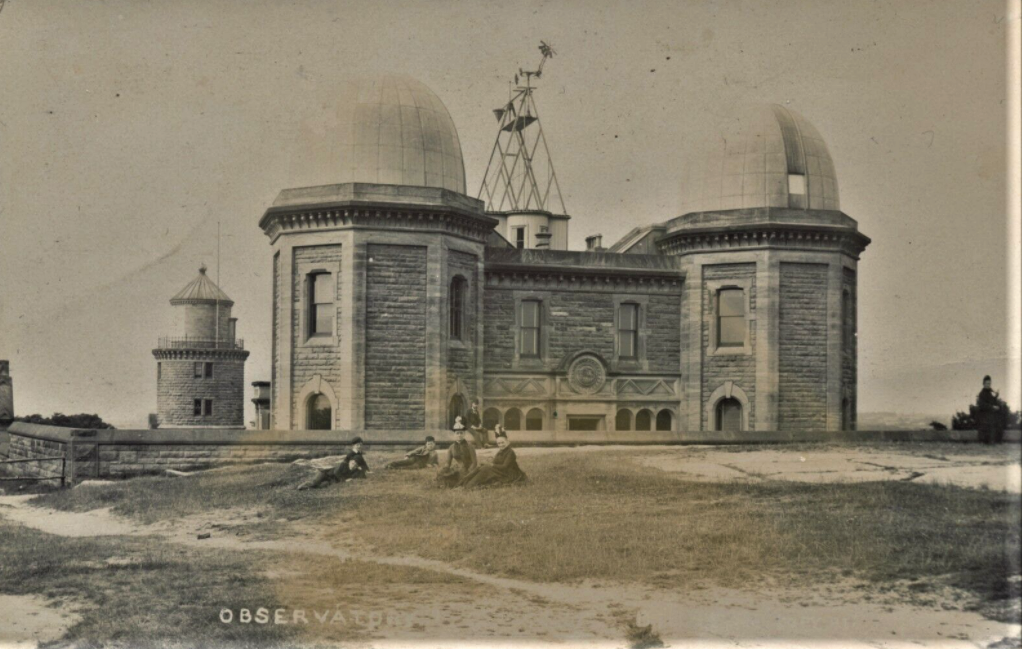 “Back in the days when my father and I visited, Liverpool was a pretty sad place. It was 1948. The war was over but much of England was trying to overcome the years of constant fear, poor economy, and probably a dozen other hardships.

“It was awful to a degree, but I remember the hotel we stayed in. It was near the observatory and if you stood on the front veranda you could look down over the city and you could see the River Mersey. There was always a ship moving up or down the river. I remember, even in summer – I think it was late in August – the breeze coming off the Irish Sea and up the river valley was cold.

“It was awful, but the telescope was wonderful. I regret that I didn’t get to use the telescope because one of the inside lenses had “gone foggy.” I did spend some time with the caretaker and one of the Society members, I was satisfied with just seeing it. Even then it was more than sixty years old.” 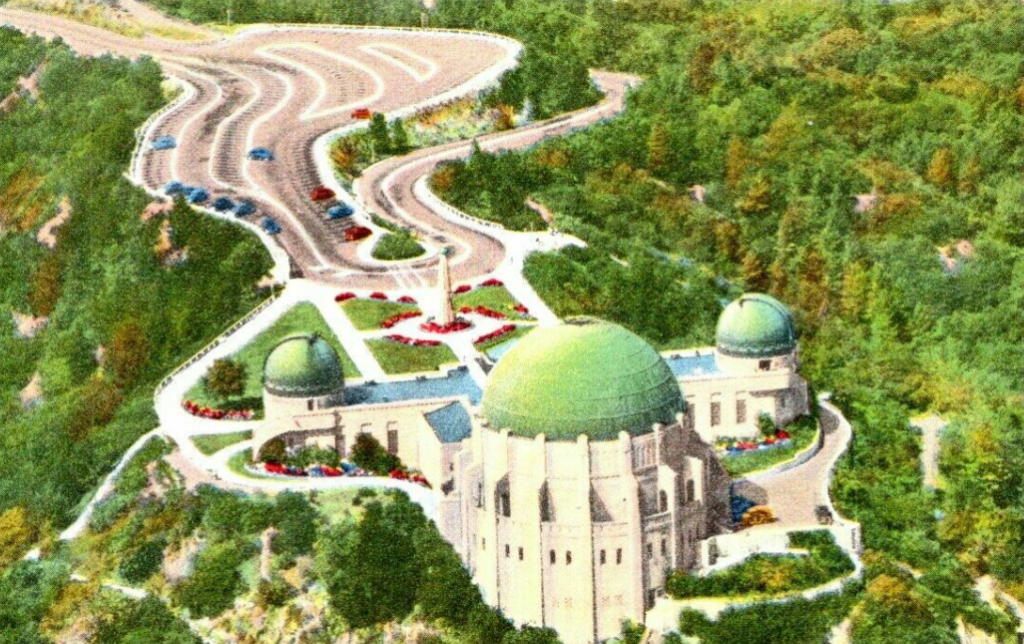 “I guess most every telescope enthusiast would tell you that Griffith is their favorite observatory. It has been on top of Mount Hollywood since 1935 and it got there because a man by the name of Griffith Griffith donated the land and money to build it. One neat thing about Griffith is that it is beautiful both outside and inside. There are murals on the walls by artists whose names I can’t remember, but they are very interesting and educational, too!

“I was there around 1954. It was quite an adventure. It was summer and everything was dry and brown. The dirt road up the mountain was dry and clouds of dust rose-up from the other cars coming and going. In those days you wished for a breeze so it would blow the dust away from the observatory.

“Griffith is a place where that old adage, a bad day at an observatory is better than a good day everywhere else. Yeah, I made that up, but it’s true.”

Charlie went on about a couple good books on the Griffith that everyone should read. He also asked if I would be interested in a bonus, then handed me three more postcards from his collection of nearly three-hundred cards. They follow: 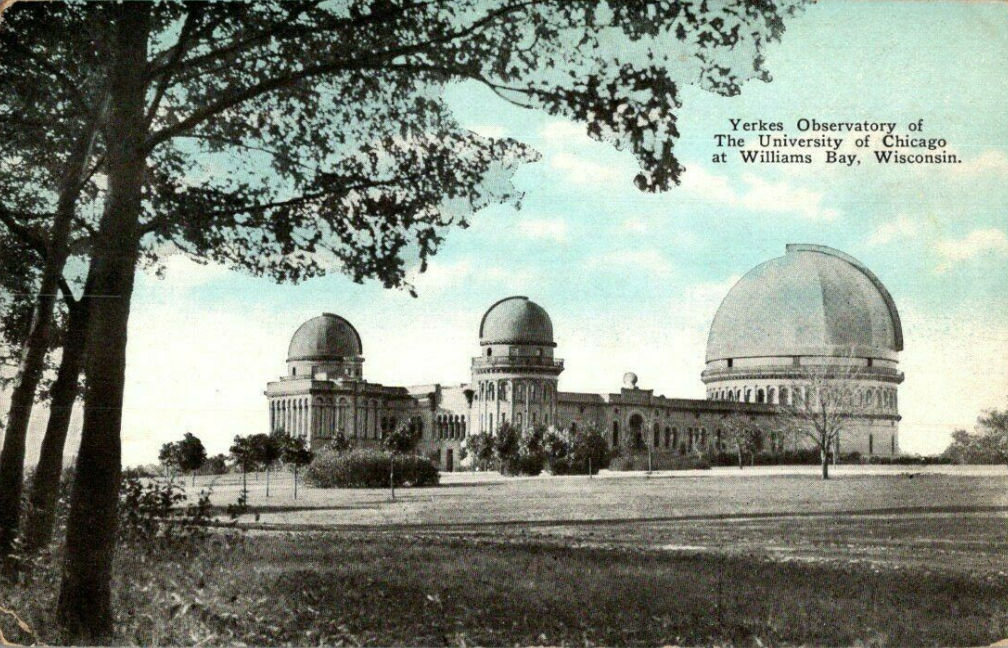 Founded by George Ellery Hale in 1892 and until May 2020 was part of the University of Chicago. It was financed by the Philadelphia-born businessman Charles T. Yerkes. 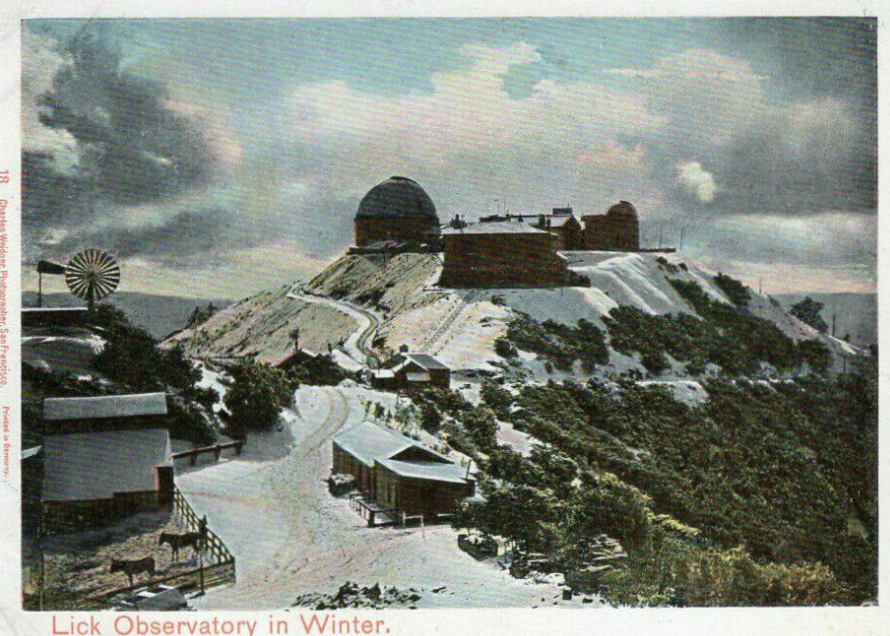 The Lick was the first permanent mountain-top observatory. Construction began in 1876 and took eleven years to complete. Most of the funding came from James Lick, a Pennsylvania real estate investor. 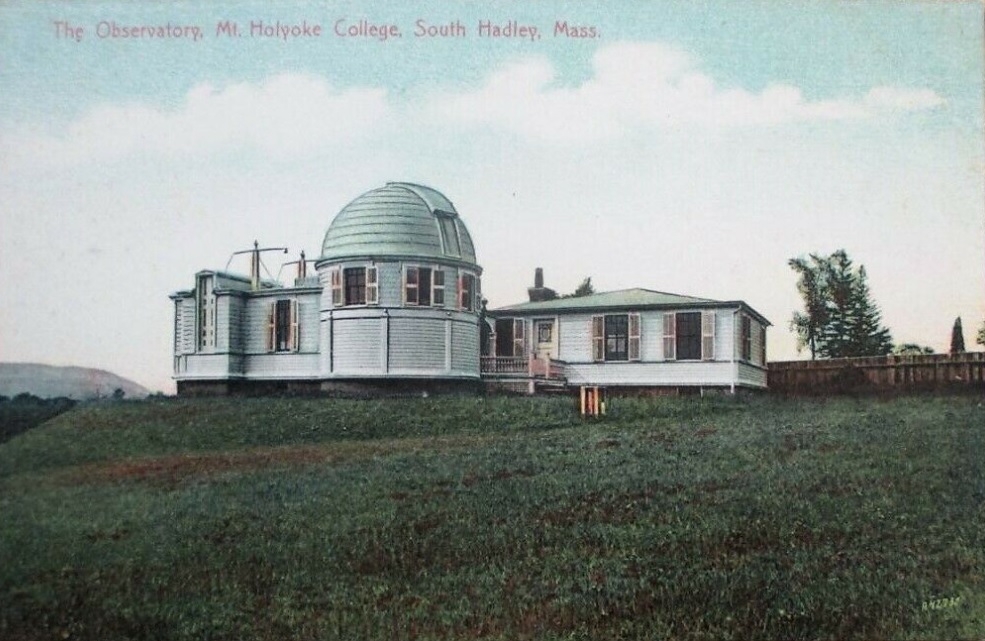 The observatory on the highest point on the Mount Holyoke College campus is named for John Payson Williston, a Easthampton, Massachusetts, inventor of inks. Construction began in 1881.

Ellie McCrackin is a pen-name used by one of America's foremost archivists. Preferring to remain in the background, Ellie ghost writes for some of the leading world historians. She loves postcards and loves to write about the stories they tell.
PrevPreviousCurious Canada
NextThe Ripon HornblowerNext
3 Comments
Oldest
Newest Most Voted
Inline Feedbacks
View all comments
Peter Meggison

The Blue Hills Observatory remains very much of an attraction to people in the Boston area. It is part of a vast hiking/wilderness area on the southern fringe of Boston. On any given weekend during the four seasons, hundreds of people will visit the observatory…..hiking their way up to be rewarded by outstanding views in all directions. And, yes, post cards (among other things) are for sale in the observatory gift shop.

There are postcards for any life, or any aspect or interest in someone’s life.

Who would have thought of a pen name for an archivist.

My aunt attended Ohio Wesleyan, but I don’t know if she ever spent any time in the university’s observatory.