The strange and unusual are seldomly related except through their quirkiness. A burning spring, the largest private home in Canada, and a blacksmith shop are very different things, but each is certainly curious. Read on for tales of mystery, wonder and suspense. 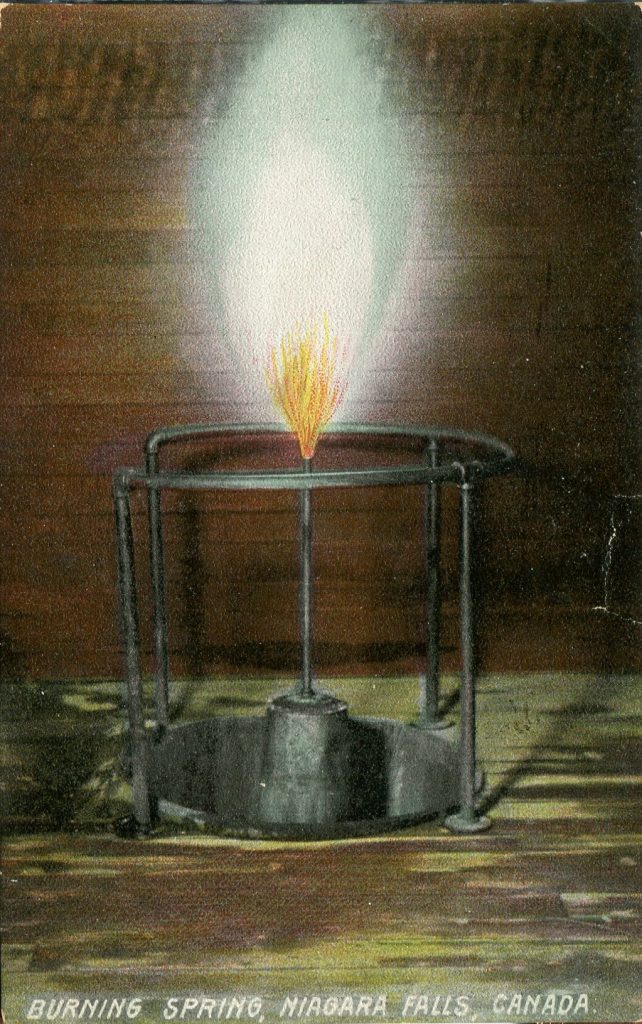 Soon after the War of 1812, more accurately in July 1814, when American troops were making their way out of Canada, a contingent was ordered to destroy the mills at Bridgewater Mills. The village was later re-built and business was conducted there for another fifty years.

Excavation workers on the original mills accidently uncovered a spring emitting a flammable gas with a pungent sulfur odor. The amount of natural gas bubbling to the surface through the water was small and could only be ignited when collected in volume.

Two enterprising young men recognized the value of the discovery and thought people would happily pay to see such a phenomenon. Their first step was to build a shelter to enclose the spring, then erect a collection container with a valve capable of easy operation. They used a barrel and a cork in the end of a pipe that when the cork was removed the gas would escape under some pressure from volume. The first Niagara burning spring was born. It would become the first attraction at Niagara Falls.

The burning spring was added to many adventure and travel books during the 1830s, ‘40s, and ‘50s.  It wasn’t long before the burning spring rivaled the waterfall as the primary destination in the area.

The keeper of the spring extracted a fee (about ten cents) from visitors for the opportunity to view the burning spring. After paying their entry, tourists were led into the shelter that covered the spring and the attendant removed the cork from the pipe and the gas lighted. The gas would ignite and burn brightly for a brief moment to the delight of all. Once the gas supply inside the collection barrel was burned off and depleted sufficiently, the fire went out.

The owner’s son inherited and then a grandson continued to receive visitors until early 1879. A new owner took over the following summer and recognized the need to fix and repair the Burning Springs building. Gatekeepers were put in place at a salary of $30 per month and the admission price was raised to fifty-cents. The new admission fee included all-day access to the gardens and picnic grounds.

Evidence given at an arbitration hearing in April 1886 revealed that in the summer of 1884, more than twenty-five thousand tickets were sold. For unknown reasons the gas flow ceased in the early months of 1885.

In 1886, a new commission was formed to oversee the Queen Victoria Niagara Falls Park, and a protracted legal proceeding commenced. The commission wanted to confiscate the property that was once the burning spring part of the new recreation area.

At the arbitration hearing it was determined that fair compensation for the owner would be paid when the commission took over the lands. It was then reported that the owner had been charging tourists to see the “Burning Spring” even though it had been dried up for the previous 18 months. An obvious case of fraud.

In 1888, the arbitration officer determined the fair value of the property to be $2,600 however the park commission paid $4,200 for the Burning Spring property and he was granted a $2,000 annuity per year for the remainder of his life.

To resurrect the Burning Spring, a private company erected a new building on the site of the original and they piped-in natural gas. Then they opened a “New Burning Spring.” There is an excellent chance that the image on the card above is from that time.

Naturally the new attraction had little charm and there were few visitors. Sometime prior to 1920 the new building burned to the ground. Other attempts at restoration were made but again fire took its toll on June 5, 1969. This time the legend died in the ashes. 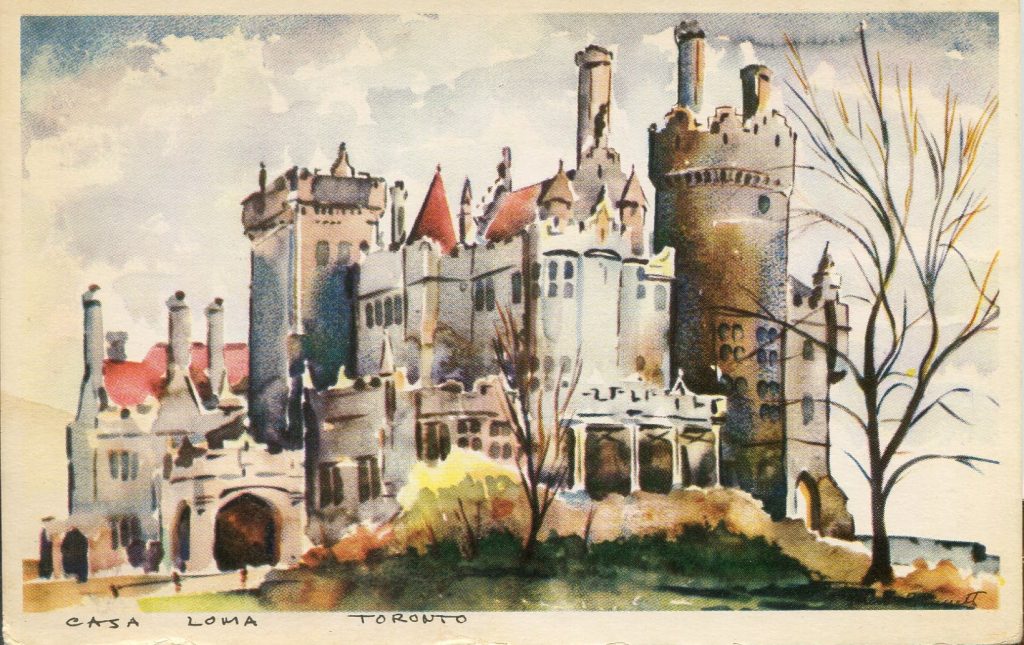 Casa Loma is the largest private home ever built in Canada. It sits facing the sun (south) on Davenport Road in downtown Toronto, Ontario. Of note is its address, it is number 1 Austin Terrace, a named Toronto street build specifically to serve as the address location for Casa Loma. It was the home of Canada’s two most enthusiastic patrons of youth organizations – Henry Mill Pellatt and wife Mary (née Holland). Sir Henry supported the Boy Scouts of Canada; his wife was the first commissioner of the Girl Guides of Canada.

Sir Henry employed European artisans and contractors to build the home he commissioned from the Canadian architect Edward James Lennox. Lennox was well respected long before he designed Casa Loma, he was responsible for thirty public buildings in the city, including churches, office buildings, the city hall, a mausoleum, the local athletic club, a theater, several hotels, and the bank.

It is unsure how much hands-on work Pallatt did, but it is certain that he “supervised” much of the construction. He was over 50 years old when the decision to build Casa Loma was made, he had already made his “millions.” Pallatt’s most notable achievement was the part he played in bringing hydro-generated electric power to the city of Toronto.

Construction began in 1911 on the stables. The stables served as a garage, a potting shed, stalls, and carriage rooms. On the second floor were bed-chambers for his staff. All paid help. This complex was built on the corner of the property and over three-hundred feet from the house.

One interesting group of contractors was the team of Welsh miners who Sir Henry employed. It should be remembered it is cold in Toronto in the winter. Sir Henry must have hated cold weather and that may be the reason he wanted a tunnel built from his home to the stables. Why Welsh miners? Miners are experts at building tunnels.

In his early years Sir Henry served in the Canadian military in a rifleman’s unit, the Queen’s Own Rifles of Canada. He enlisted in 1876 and earned promotions through the ranks eventually becoming the commanding officer. He served more than thirty years.

Sir Henry lived in his chateau (a house on a hill that was never finished due to war surplus issues) until his death in 1939 at age 80. 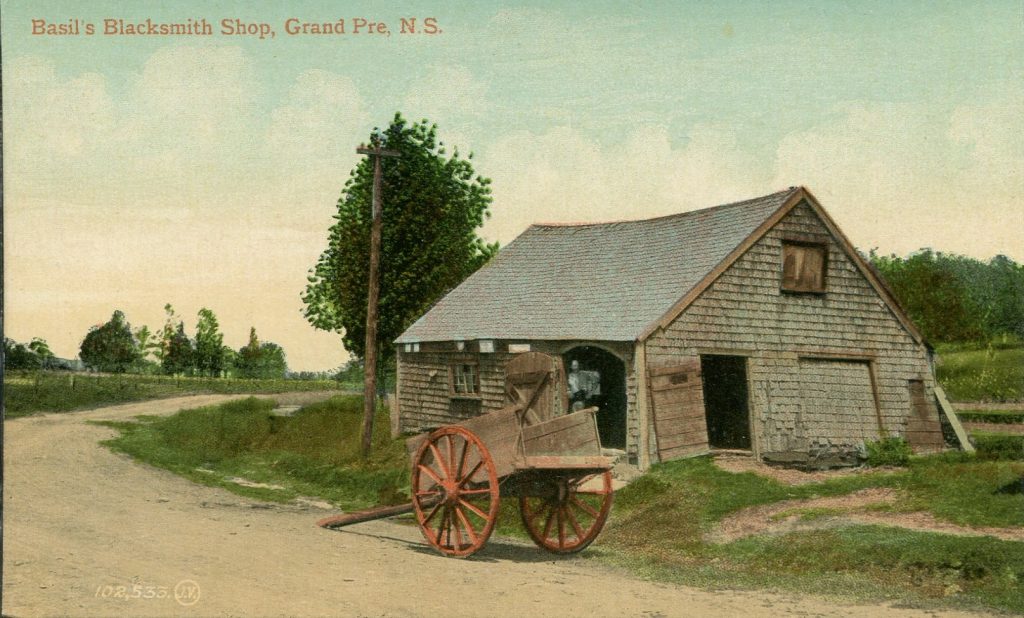 Long before anyone reading this essay can remember the tiny seaside village of Grand Pre was duly incorporated into the community of Wolfville, Nova Scotia. Today Wolfville is a town of just over four-thousand residents, situated about 60 miles northwest of the capital city of Halifax. It is the home of Acadia University, a non-denominational university with four faculties in the arts, pure and applied science, professional studies, and theology.

It is a popular tourist destination with stunning vistas of the Bay of Fundy and the Gaspereau Valley.  It is also popular among those who chase after new and enterprising wineries.

The postcard has been published at least twice by the Valentine Company, once with the caption abutting the left margin and again with the caption to the right. There are other iterations of the same photograph by other publishers. There is one other place the card appears, in the Acadia University archives of historic photographs. The archivist’s description suggest that the card was created circa 1903 by the Montreal or Toronto office of the Valentine & Son Publishing Co., Ltd. of London. The card was printed in Great Britain. The card was received by the university from the Rev. F. H. Beals.

No other information is currently available about Basil or his blacksmith shop. Your editor has submitted an inquiry to the university library. If additional information is received, the readers of Postcard History will be the first to be informed. 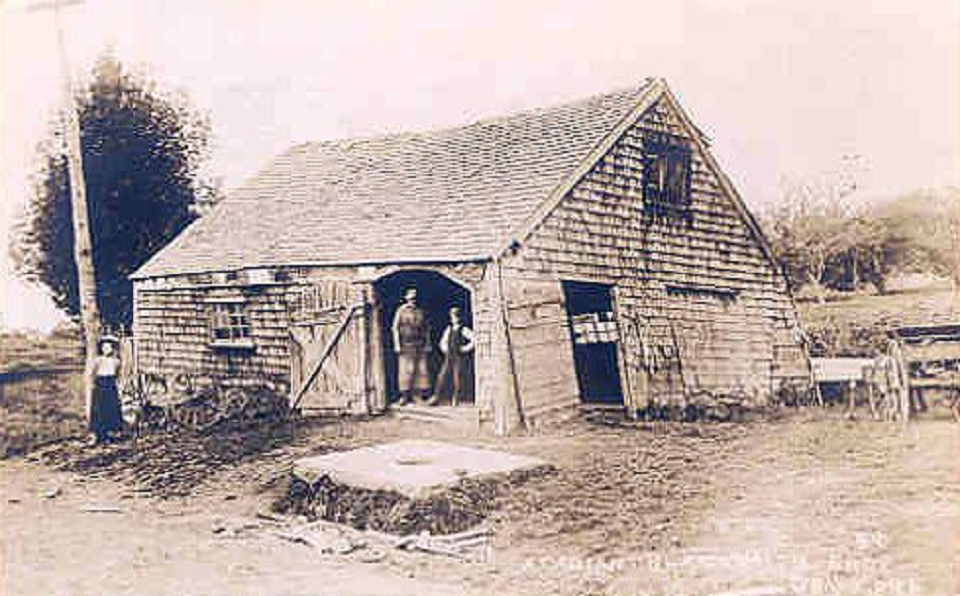 One piece of happy news was found by Postcard History’s webmaster. It is this image of the blacksmith’s shop from an earlier time. Is that a date in the bottom right corner? Does it read, 1881? One can’t help but wonder if that is Basil and his son standing at the door and perhaps that is Basil’s teenage daughter standing by the electric pole.

The Staff of Postcard History offers this article for your enjoyment. It is a combined effort of many: our publisher, editor, webmaster and collectors/contributors far and wide. Please use the COMMENTS feature below to let us know how we're doing.
PrevPreviousHomes of Our Presidents – Part Five of Six – James Abram Garfield
NextMy Five Favorite PostcardsNext
2 Comments
Oldest
Newest Most Voted
Inline Feedbacks
View all comments
a Torontonian

Interesting story about Casa Loma – but the ending you offer is incorrect. Casa Loma was not finished because of several circumstances that lead to Pellatt’s bankruptcy. From CasaLoma.ca ‘To finance expansion, Pellatt and Pellatt went further and further into debt. The one sure source of income from the monopoly of electrical power vanished when political decisions allowed for public ownership of electricity. In a futile attempt to restore his wealth, Sir Henry Pellatt turned to land speculation. Which in the later years of WWI did not go well. His ‘castle’ was seized for back taxes by the City of… Read more »

I’m familiar with the bandleader Glen Gray and his Casa Loma Orchestra. The group had played an eight-month engagement at the mansion, which was serving as a hotel in 1929.