Sammy’s Bowery Follies was not the first “dive bar” nor did they invent the idea of “slumming” but for a stretch of time through the 1940s to the 1960s, Sammy’s was New York’s best example of both.

For the uninitiated, a “dive bar” is a drinking establishment without pretenses. It’s a place to get drunk without refinements such as décor, cuisine, amenities and social graces. There may be cheer and affability, but they’re driven by nothing authentic except the democracy of drunkenness.

“Slumming” is a form of tourism, a kind of pseudo-socialism in which members of society’s upper classes entertain themselves by mingling with the lower classes – often by visiting dive bars devoted to the downtrodden. They may exalt their new-found comrades for their grit and character – before returning to their safe and refined redoubts.

Sammy Fuchs opened a saloon in 1934 at 267 Bowery Street between Houston (as New Yorkers know, that’s pronounced “House-ton” and not “Hew-ston” like the city in Texas) and Stanton Streets on Manhattan’s Lower East Side. A saloon at that time and place was intended to attract society’s displaced – alcoholics and the homeless. The Bowery’s denizens at that time were known as “hobos,” “bums,” and “derelicts.” 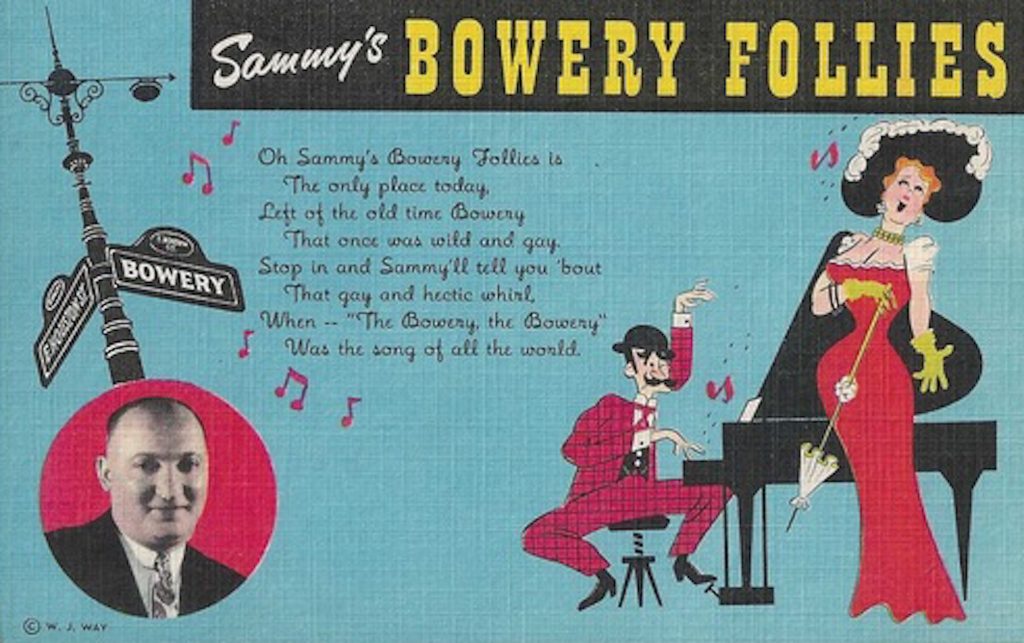 During the 19th century the Bowery was a respectable entertainment district but that began to change with the coming of the 3rd Avenue Elevated Railway, lasting from 1878 to 1955, which covered the street in semi-darkness and occasionally spewed hot ash to the sidewalks below. In this c.1910 street view published by Theodor Eismann, the Bowery may still have been a rowdy place with mixed entertainment, like the Elite Lady Orchestra at Atlantic Garden. Unfortunately, the street kept moving downhill. 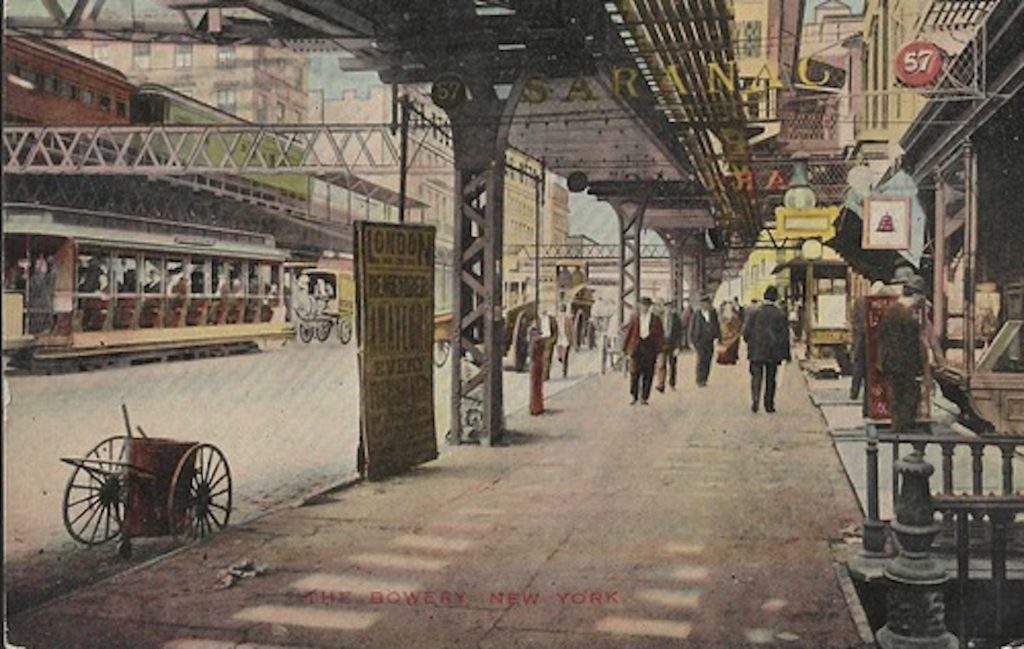 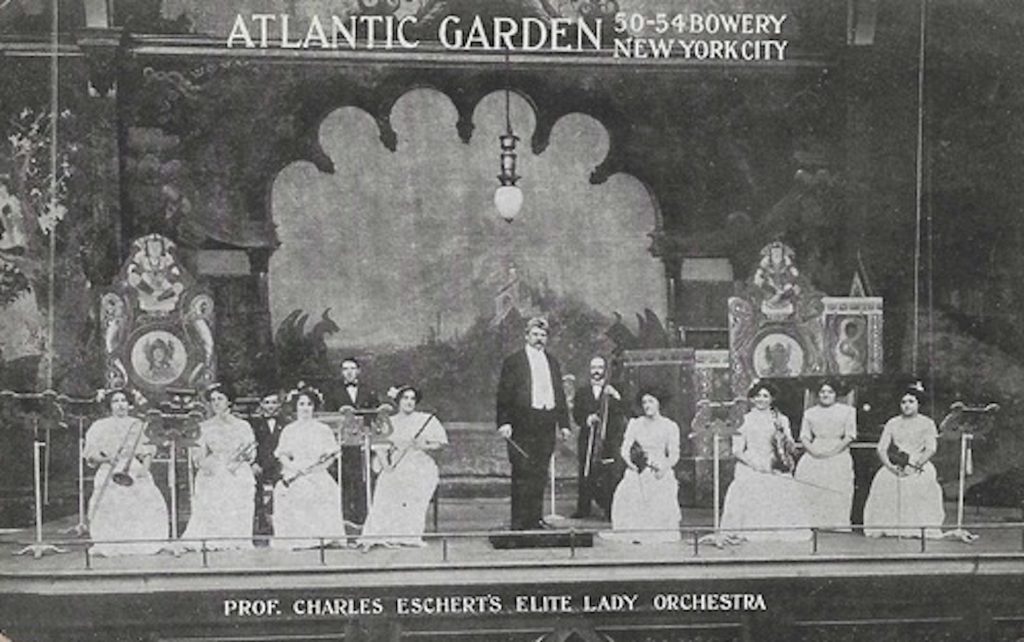 By the 1930s to the ‘60s the scene had lost its glamor. It was dominated by cheap restaurants and saloons, tattoo parlors, barber schools for cheap haircuts, day-labor employment agencies, missions, soup kitchens, cheap hotels, called “flophouses,” and streams of panhandlers. The Bowery was synonymous with vagrants sleeping in doorways. 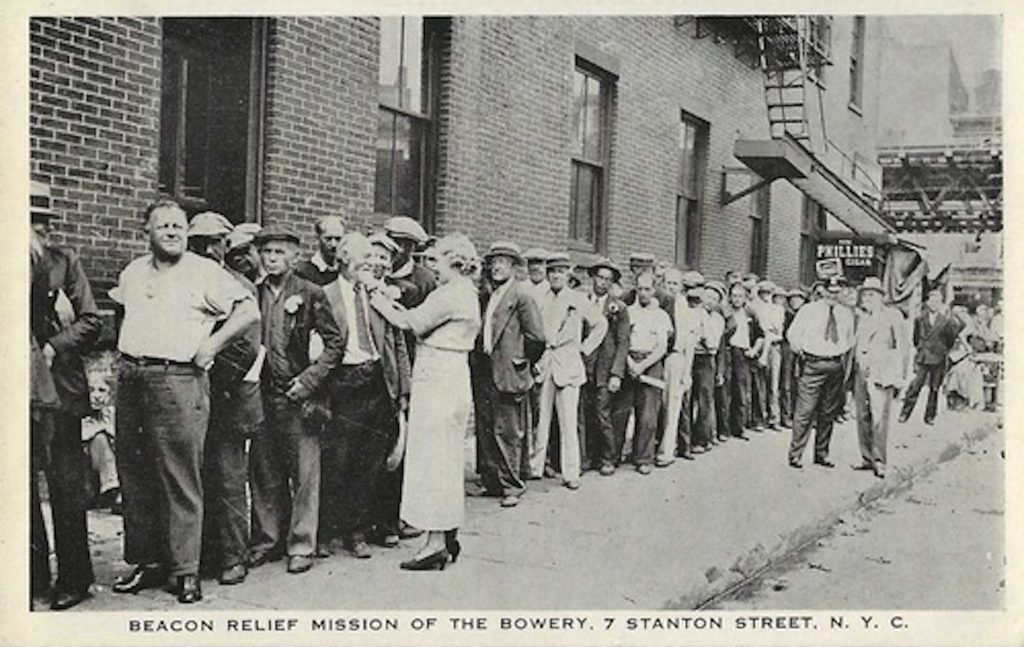 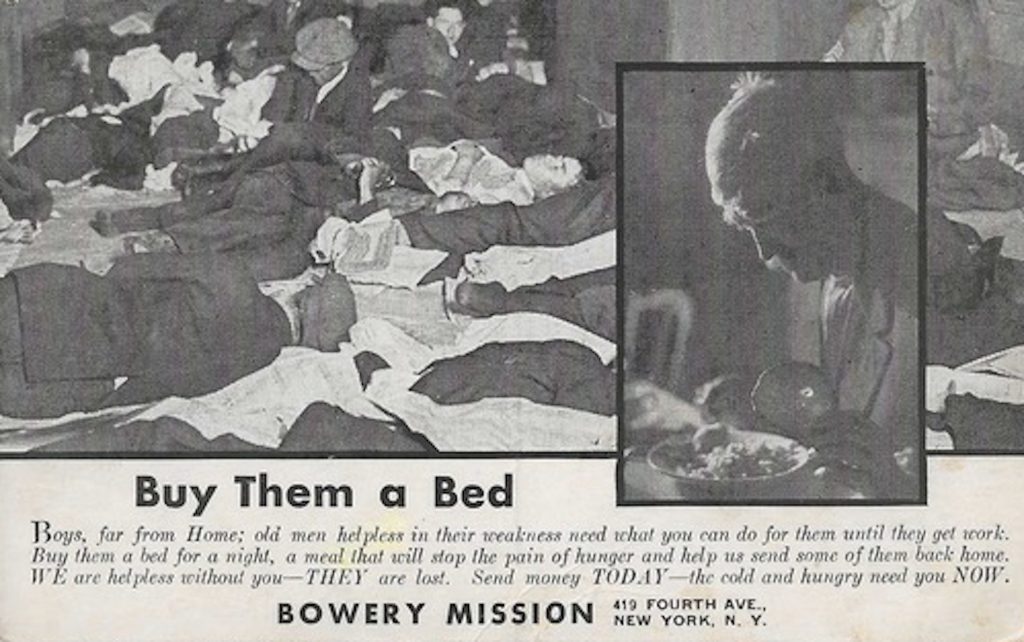 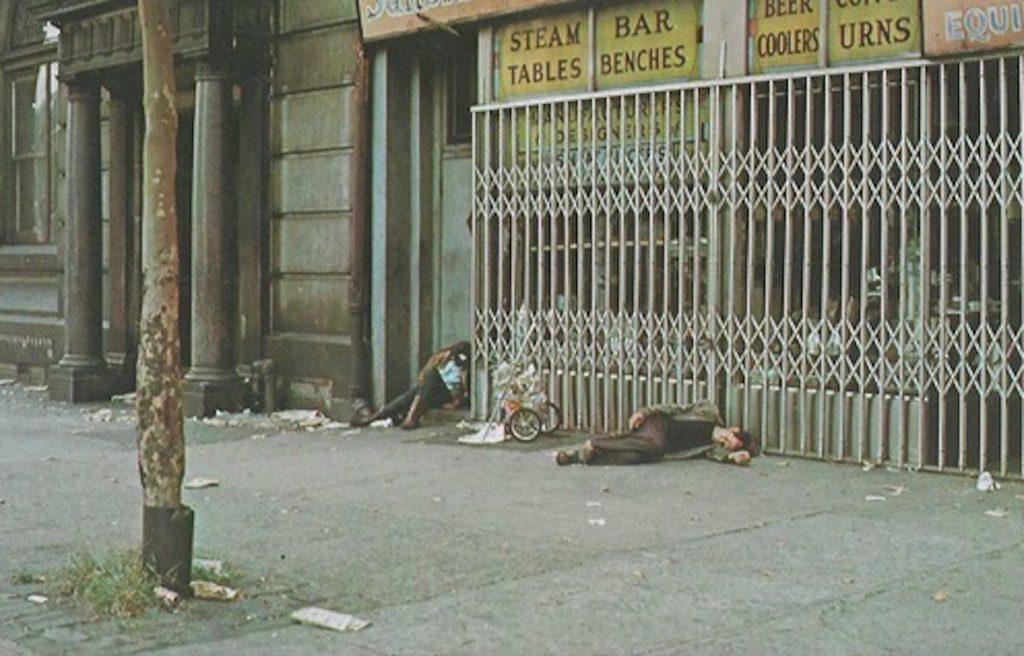 Sammy Fuchs was anything but a reformer. He embraced this déclassé world and made it his point of differentiation. Unsurprisingly, he used postcards to promote his unique brew of booze and blather.

During the daytime, Sammy’s was a straightforward juice joint where customers got pickled. However, as evening rolled around, the checkered tablecloths came out, getting ready for the uptown swells and Grey Line tour buses to arrive. The only difference was that Fuchs let his daytime customers stay over and become part of the party in the evening. 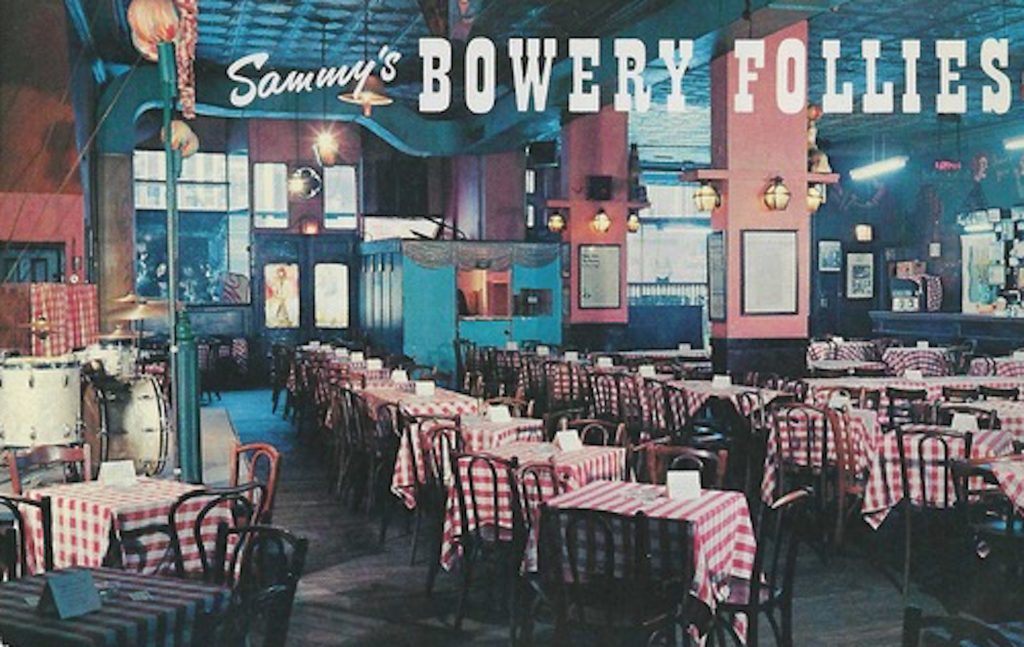 The music format was Gay 90s, nostalgically recalling the era of the Floradora Girls and the Ziegfeld Follies, ladies in big hats ornamented with ostrich feathers, men in top hats, bowlers or straw boaters. Other cabarets around the city featured Gay 90s performers, like Fisher’s in Brooklyn and Bill’s Gay 90s in Midtown Manhattan but Sammy’s was different. 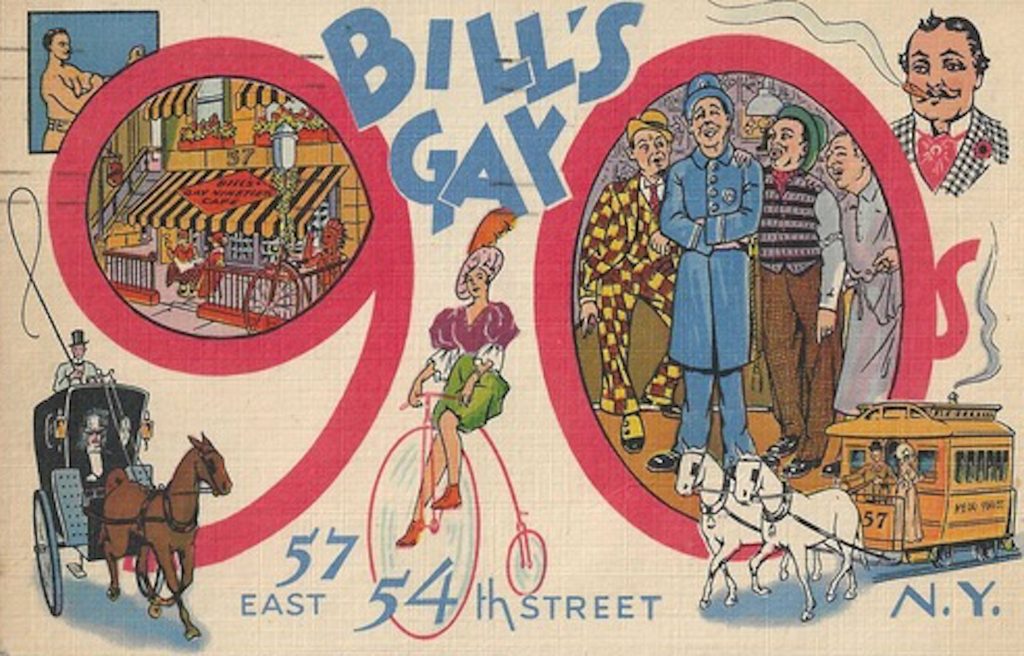 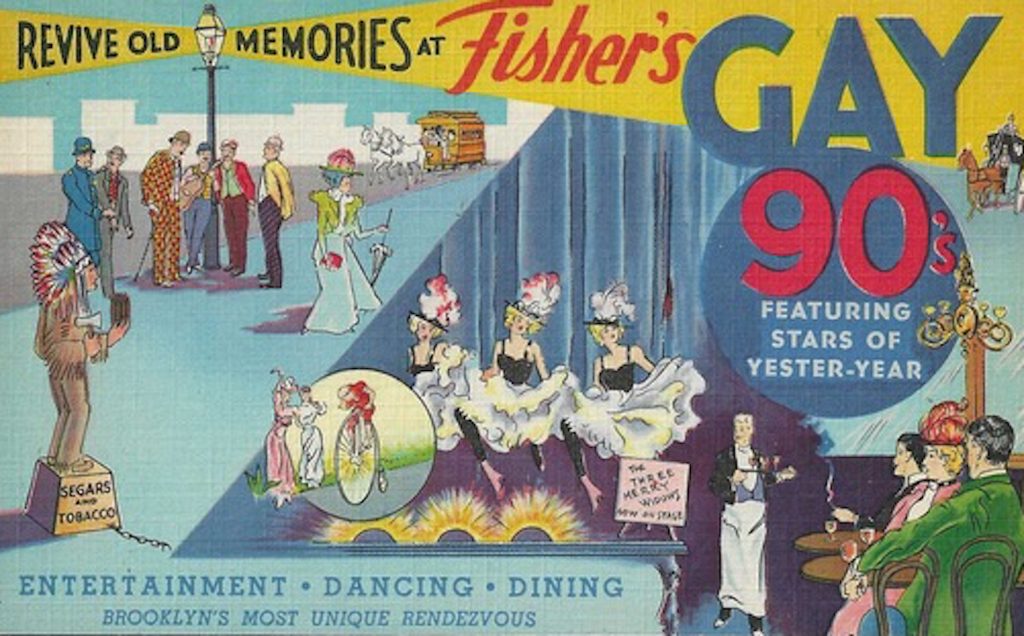 Some of the featured performers at Sammy’s included Gladys Carr, formerly with Earl Carroll Vanities and the George White Scandals back when she was a nymphet, Shirley Del, Mable Sydney, sister of movie director George Sydney, and Gladys Shaw. Ninety+ year-old Dora Pelletier, made famous when Alfred Eisenstadt photographed her for a 1944 Life Magazine spread on Sammy’s, was still kicking up her heels. They were a bit long of tooth, their proportions could be described as “majestic” and their outfits were a bit threadbare and stretched at the seams. Nevertheless, these performers made up for it all by their enthusiasm and eagerness to mingle with the guests. 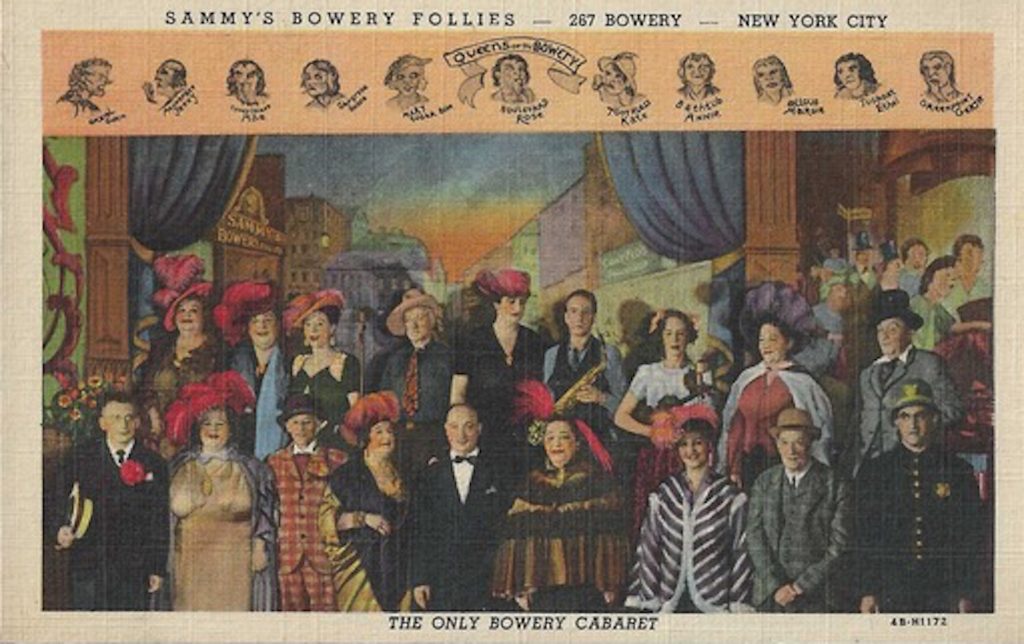 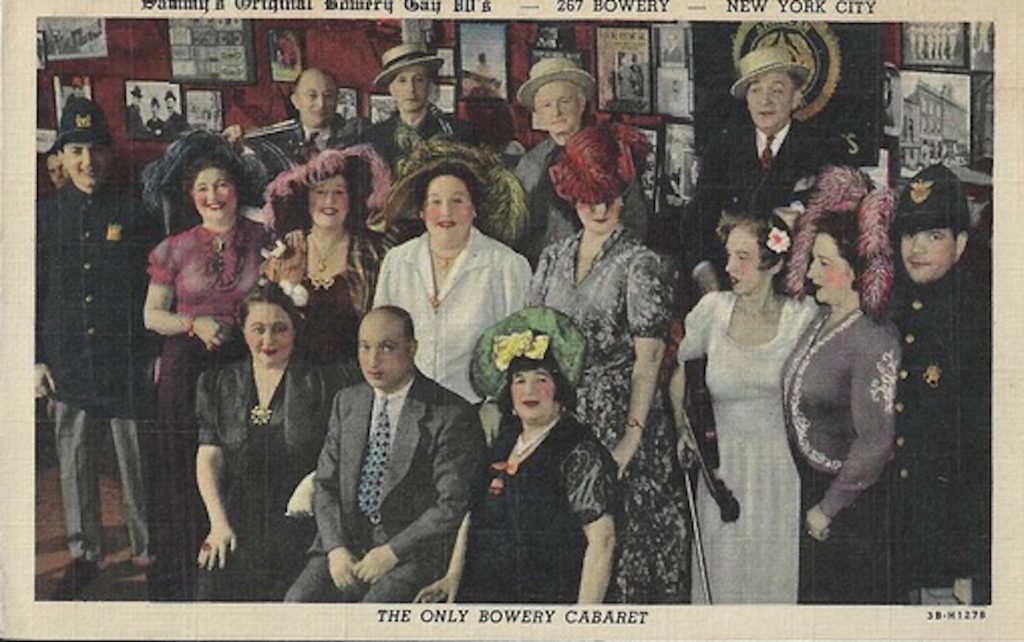 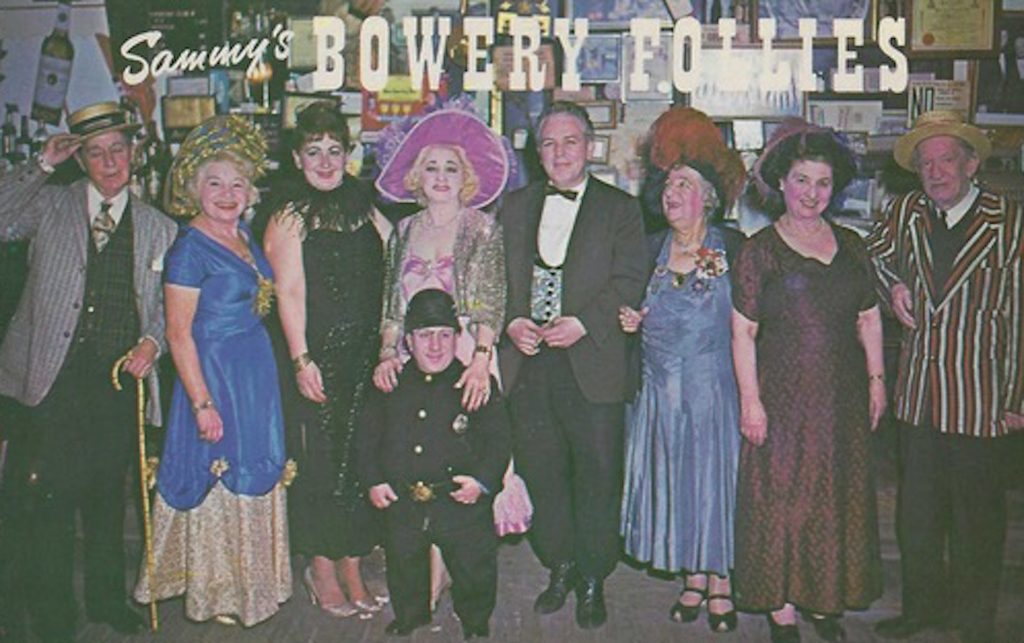 One custom at Sammy’s to encourage the mingling was called “The Stroll’ in which the performers lined up holding hands and traversed the place while singing. They could divert to accept tips and share a few dance moves with a customer. It all contributed to that breakdown of the gap between performer and audience, which just like the erasing of social class distinctions, could make the place utterly chaotic and fun.

The celebrity in the next seat could be John F. Kennedy, Rex Harrison, Louis Armstrong, Jimmy Durante, Jane Mansfield or the Rolling Stones but there were no velvet ropes or special sections. Even Sherman Billingsley, proprietor of the Stork Club, New York’s poshest and most exclusive boîte, would bring some pals down occasionally to inspect this place calling itself “the poor man’s Stork Club.” Woody Allen’s Dad, Martin Konigsberg worked here as a waiter.

The cabaret was open to the street and the goings on indoors could be seen and heard outdoors. The scene in front of Sammy’s sometimes was as raucous and riotous as the activity on the stage and dance space indoors. Weegee, the New York photographer known for his depictions of New York’s underbelly, was a regular. He rarely lacked for subject matter to document.

What most distinguished Sammy’s and makes it such an artifact of its time was its full-throated embrace of alcohol and drunkenness. This spirit is perfectly represented in this amazing Giant 7” x 10.5” postcard published by Curteich Chicago for Sammy’s which shows “The Queen of the Bowery” Tugboat Ethel passed out in her seat, alongside other regulars at the nightclub called “The Escapists.” Eisenstadt’s Life Magazine article said it well, From, 8 in the morning to 4 the next morning Sammy’s is an alcoholic haven for the derelicts whose presence has made the Bowery a universal symbol of poverty and futility. It is also a popular stopping point for prosperous people from uptown who like to see how the other half staggers. 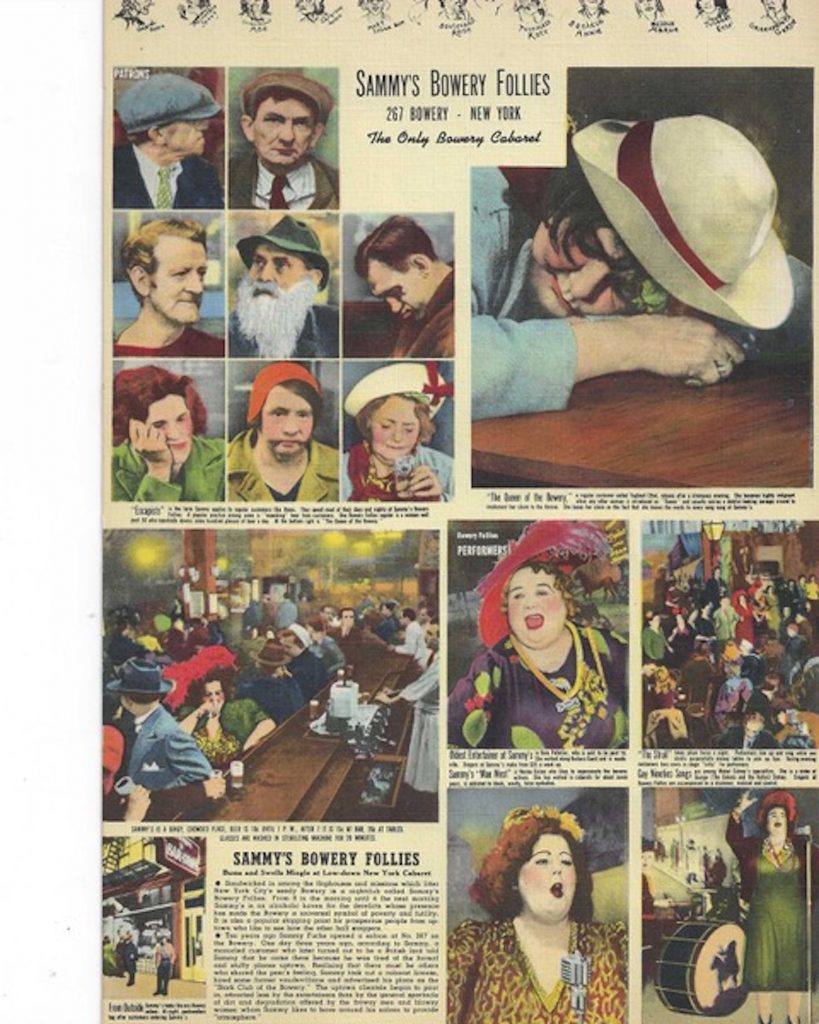 The party ended in 1970, a year after Sammy Fuchs’ death. Seven-hundred people showed up to say their final farewells on closing night.

It’s hard to believe that another place like this could ever again exist. Alcoholism today is considered an illness or a form of moral turpitude, not as a funny personal quirk or lifestyle choice. The lines between celebrity, respectability, and vagrancy are also much clearer and thicker today. But, have we lost something? Are we better off today for living in a society that’s more caring and circumspect?

Hy Mariampolski holds a Ph.D. from Purdue and spent his career in international marketing and market research. Nowadays, living in East Hampton, New York, he collects, trades, sells and writes about postcards. Hy has also been teaching a Zoom course on New York history through postcards called “Wish You Were Here” for CL&L, an adult education affiliate of Marymount Manhattan College.
PrevPreviousEarning Your Living in the British Empire
NextHomes of Our Presidents – Part Five of Six – James Abram GarfieldNext
12 Comments
Oldest
Newest Most Voted
Inline Feedbacks
View all comments
John

Very interesting in many way. I have often heard that a term “dive bar” came from this sort of establishment was in the lowest level (cheapest rent?) of a building and from street level it was a few steps down thus “diving” into the bar. Thanks

A walk down memory lane, not that I would have ever been there but for the stories that came down through the ages. Thanks Hy.

I probably would have been too depressed by the poverty and drunkenness to enjoy “slumming it” at Sammy’s.

Wonderful. We come here to learn, and this is an eye opener to this lad from south central Kansas, oh my goodness. In going through boxes of mixed cards you do see some of these club cards sometimes and I have thought them interesting, but do not believe I ever put one in my pile to keep. Now I know some of the “rest of the story,” don’t you know. There is no one better at explaining the streets of New York City than Dr Hy Mariampolski. I attended a recent lecture he gave on architecture in NYC and he… Read more »

Another great article by Dr. Hy! As a lifelong New Yorker (forgive a few years in LA), it’s wonderful to learn and see more about the city’s history. And, as executive director of the Center for Learning and Living, here’s a shout-out to Hal for mentioning Hy’s great classes at our non-profit school for people 55+. Hy is giving 2 online sessions on vintage NY postcards in April, as part of our spring semester. We offer free attendance to one session to visitors, who can register on our website clandl.org. You’re welcome to join us.

Great work cousin Hy. Sounds like a place I would have enjoyed a lot. As someone who hung out a lot in Times Square in the 70s/80s, I would answer your ending question with a resounding yes. But perhaps going forward, there can be some balance struck between caring and being bad ass bawdy and wild. Don’t throw the baby out with the bath water as it were. But do throw out the bath water. (not caring)

omg I see my grandma on one of these postcards 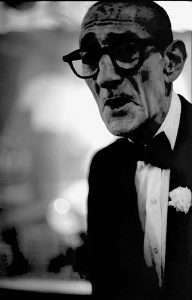 As a young photographer, and New York City aficionado, I had heard about Sammy’s and seen Weegee’s photos. I went there in 8/12/1967 to take my own photos. I came accross them a year or 2 ago. They were in their own little binder, complete with sleeved negatives and contact sheets. So, I scanned some of them, as best as I could. Just today, I played with 2 of the better shots and produced these two photos. I thought you and your audience would appreciate them. I also attached a poster I spotted a few years back while in the… Read more » 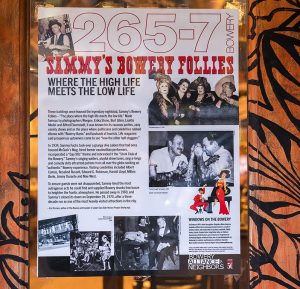 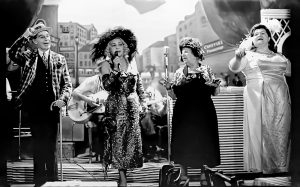 Doing some family research in germany I found this autograph from 1948/49. My german grandfather worked in the US – maybe fo the army – for a year and visited ‘Sammy’s’ with a joint group of american and german colleagues. Nobody knows what his job in the US was but I am quite sure it sticked close with his military service a a communication engineer for propaganda unit ‘Kurt Eggers’ 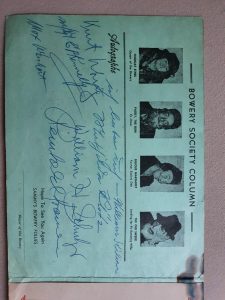