A Social History of the Bicycle

as Depicted on Real Photo Postcards

In 1839, the first practical photographic process was invented by Louis-Jacque-Mande Daguerre, a French artist and photographer. Some believed he had unleashed a nefarious invention on the world that raised questions about the morality of a device that seemingly captured a person’s spirit, but as the medium matured, most came to revel in its magic. 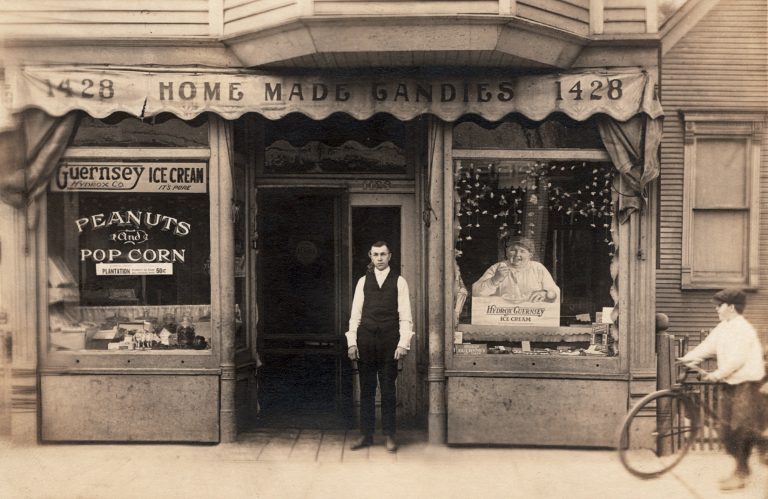 Peanut and popcorn store, circa 1920. 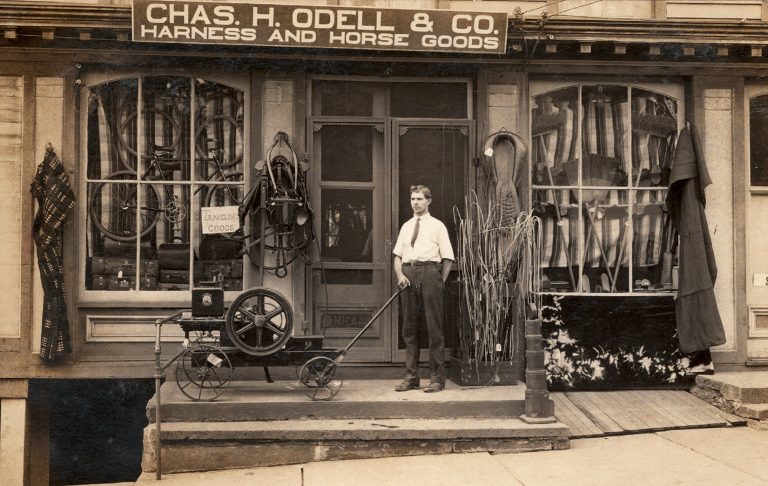 Bicycle is visible in the left window.

By 1900, the high-wheel bicycle was already a relic of a bygone era, and the safety bicycle had become a conspicuous commodity that was used as both a form of healthy recreation and personal transportation. It allowed people to travel greater distances quickly and economically and it also offered a sense of freedom, especially for women. 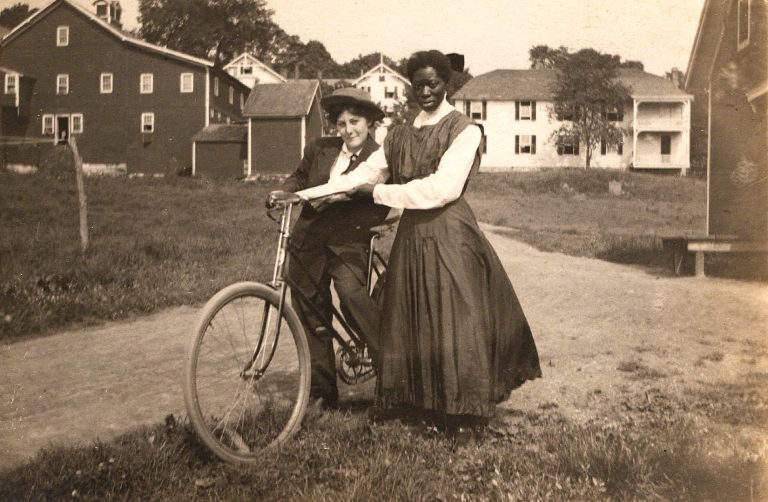 Memo on back indicates location as

These liberating pleasures were only one aspect of the role of the bicycle in women’s lives, which had been augmented by the independence gained in the taking of vital jobs in factories and in the service industries during the First World War… Susan B. Anthony, the prominent suffragette, had written as early as 1896 that the bicycle has done more to emancipate women than anything else in the world (From: Bicycles: Vintage People on Photo Postcards by Tom Phillips. University of Oxford, 2011). 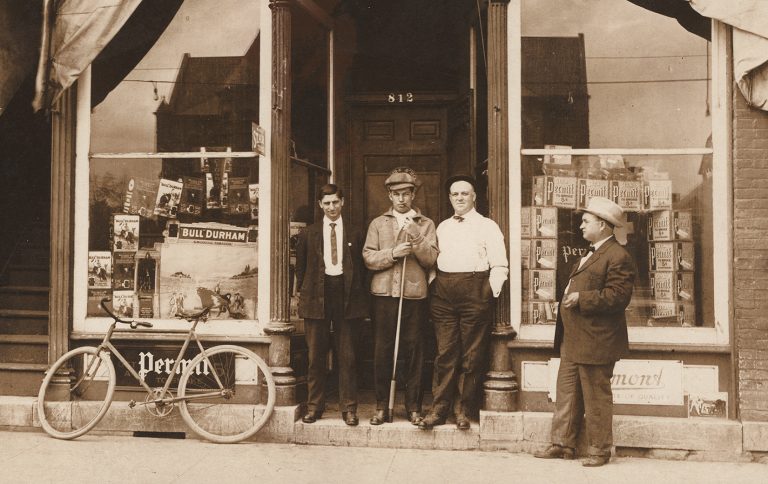 The bicycle had also become an important tool for commercial businesses, such as grocers, butchers, and general stores that allowed them to quickly get their products to customers. It was further used by mail and message couriers to make deliveries, by police to patrol the streets, by doctors to make house calls, and for a host of other social activities. Bicycle shops arose to keep all these vehicles in proper working order. This was a world-wide phenomenon. 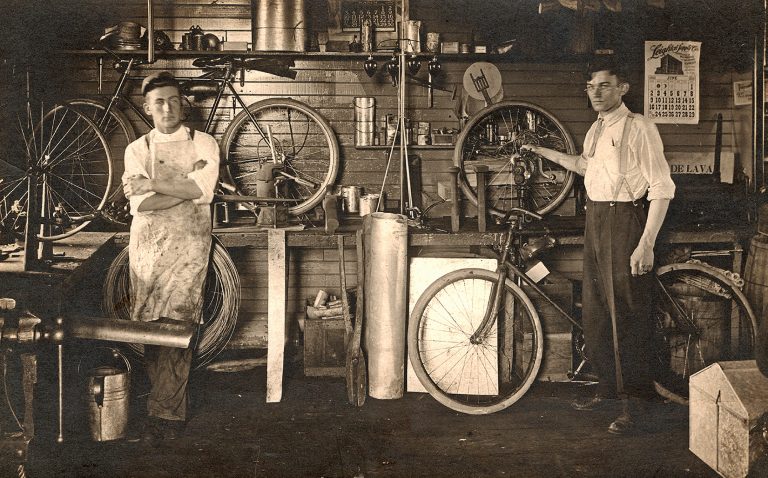 Bicycle mechanics inside a bicycle shop.

Around 1903 Kodak introduced their Folding Pocket camera. It used standard, postcard-sized film that produced real photo post cards (RPPCs) when printed on post card stock with a preprinted post card back. The general public quickly became enamored with them and mailed countless photographic post cards to family and friends. Street scenes were common, as were disasters, sporting events and of folks all decked out for social events like parades or holidays. Postcards often recorded an individual’s occupation by displaying them at their workplace or with their tools. The individuals portrayed were engaged in what they were doing and were proud, lively, and spirited subjects. 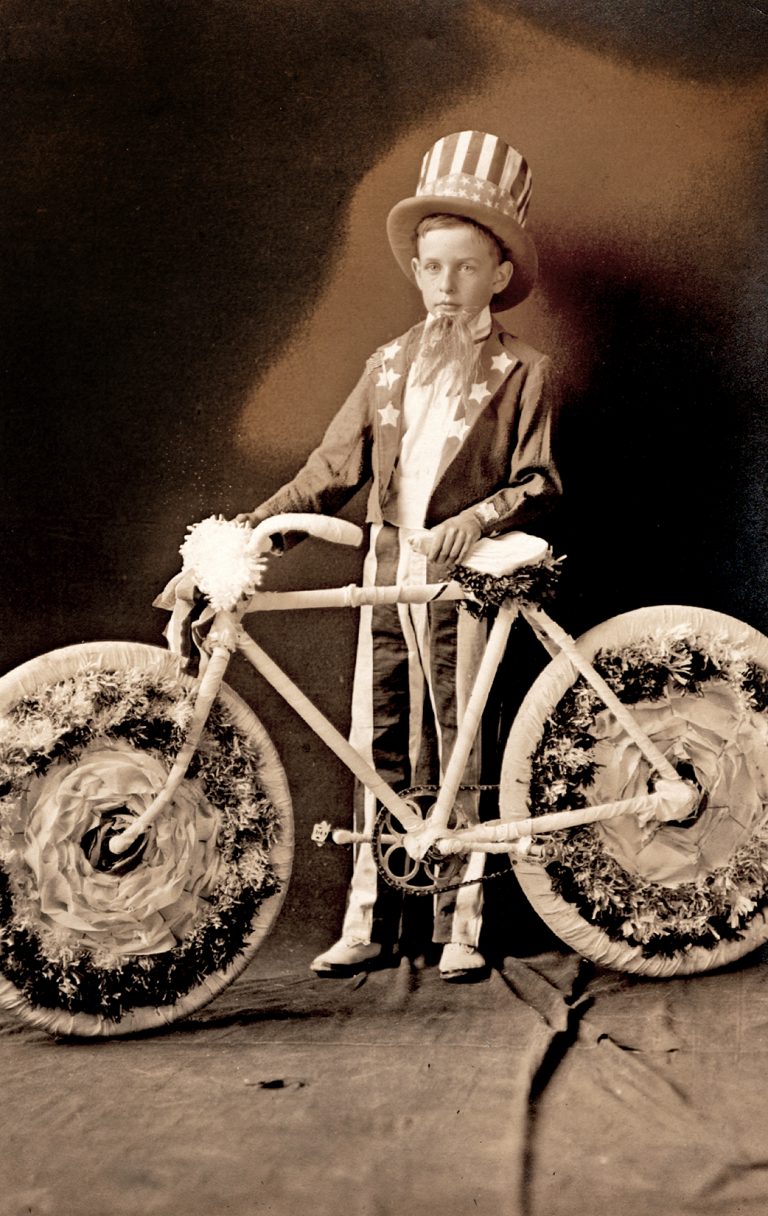 Riding in the 4th of July parade.

About this time, Kodak also introduced a service which facilitated making postcards from any type of photograph, so the postcard craze quickly became very fashionable.

Several factors accounted for the popularity of photographic postcards in the years just before the first World War. In 1898, the United States Post Office had announced that Rural Free Delivery of the mail would be provided for groups of farmers who petitioned their congressmen. Until that time, free home delivery had been made only in towns of ten thousand or more residents—roughly twenty-five percent of the country’s population. 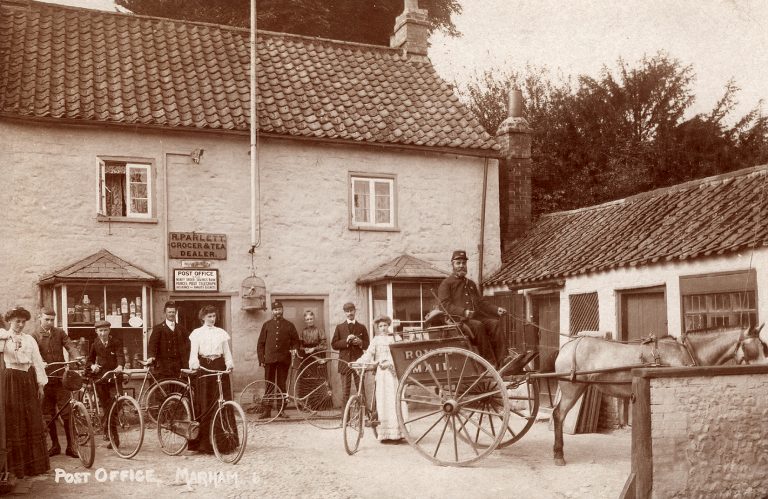 British post office in the village of Marham, England.

Rural daily newspapers experienced a tremendous increase in circulation, and on a more personal level, and invitation to a Saturday night dance could be mailed safely a day in advance (From: Prairie Fires and Paper Moons: The American Photographic Postcard 1900-1920, by Hal Morgan and Andreas Brown, published by David R. Godine, Boston, 1981).

Before World War I, America was entering the modern era and the country was becoming less agrarian and more urbanized. Cities were being populated by immigrants from around the world and many of them found their way to a photography studio for a post card image of themselves that could be sent back to family in their home country. 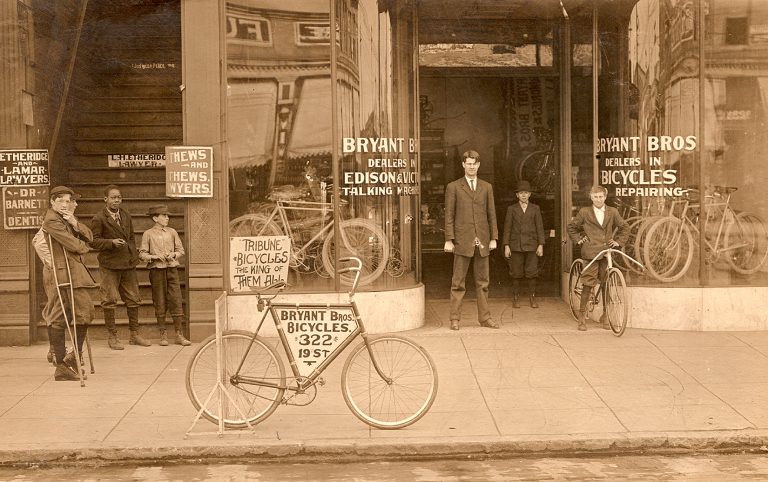 This new era also saw Victorian dress styles give way to new fashion trends and many women were inspired by the new modern woman represented in illustration of the “Gibson Girl.” Post cards from this era documented the trends as women began wearing more leisurely fashionable clothing.

Professional photographers continued to take untold numbers of studio shots and because post cards were less expensive to make, the practice ultimately led to the demise of the popular cabinet card and the tintypes of the late 19th century. Traveling photographers took vernacular images as they traveled from town to town, documenting life in the places they visited, and local photographers produced a seemingly limitless amount of RPPCs of their small towns and villages. Amateur photographers were also taking images that were produced as real photo post cards.

The formality around sitting for a portrait abated somewhat after the turn of the century. This was achieved, in part, by the faster film speeds that were used to make RPPCs. The stiff, formal portraits of their Victorian counterparts, where the sitters often had to use a studio neck brace to keep from moving during a longer exposure, were replaced with post cards of sitters that were more natural and relaxed.

The real photo post cards here, although a very modest representation of the countless millions that were produced, are a record of the period. There is a connectedness to the images because, for the most part, the subjects chose how they would be represented.

For bicycle history enthusiasts like myself, the post cards all have, besides the social history content, the added element of one or more bicycles in the image, fittingly illustrating how the bicycle represented modernity. In a sense, the RPPCs were an incipient form of instant messaging; a way to quickly convey a note or image to someone at a distance. 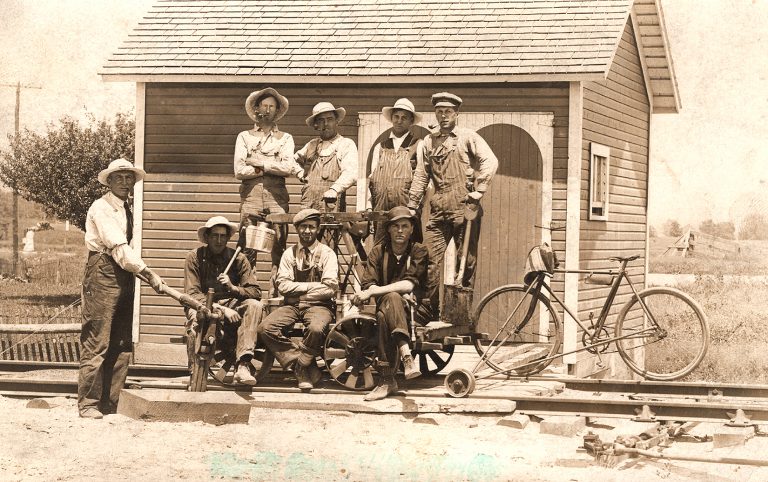 Railroad workers with a four-wheeled, pump action, rail velocipede and a bicycle that is fitted with a Coey Bicycle Attachment so it could ride on the tracks. The Coey attachment was Invented and patented by C. A. Coey of Chicago. The company claimed that it could fit any bicycle, weighed only eight pounds and it could be folded down when not in use. It sold for $12, which in today’s dollars was about $300.
The group is identified as the St. Joseph Valley Railroad Company crew from Angola, Indiana, dated June 25, 1908.

The popularity of post cards soared during this period and many of the RPPCs are unique, one-of-a-kind images that were collected and saved, in just about every household, in albums designed specifically for cards. That’s why so many have survived until this day. They sometimes contained a note on the back that said, “this card is for your collection.”

Many of the postcards from this period retain a charm that exposes an intimate look into the day-to-day lives of the people portrayed. They are a revealing window into that world.

You can see many more bicycle related social history RPPCs on my blog at this address: https://connbaker.blogspot.com/2020/08/social-history-and-bicycle-as-portrayed.html

Gerry Biron is an artist and independent researcher. He has authored several books and magazine articles on historic American Indian beadwork and is currently working on a book about bicycle history. He and his wife live in Saxtons River, Vermont.
PrevPreviousFrescos in Florence
NextWelcome to Tuck’s Famous Old GardensNext
4 Comments
Oldest
Newest Most Voted
Inline Feedbacks
View all comments
Burgie Dave

Thanks for a great article. The PC of Marham is stunning

Yes, I agree. For some reason, they didn’t include the description I supplied with the image. Here it is: This RPPC is a view of a British post office in the village of Marham, a civil parish in the English county of Norfolk, although the card was mailed from Vancouver, British Columbia, to someone in Winnipeg, Manitoba. Message on the back reads: December 8, 1912. So sorry to hear of Rev. Chambers death. We are writing to Evelyn. Mrs. Holland has gone South for the winter. CPR [Canadian Pacific Railroad] train held up at Barnet last evening. [Barnet is a district outside of… Read more »

I always look for interesting cars in the postcards of street or parking lot scenes, so I understand your search for bicycles on postcards. Good article, Gerry!