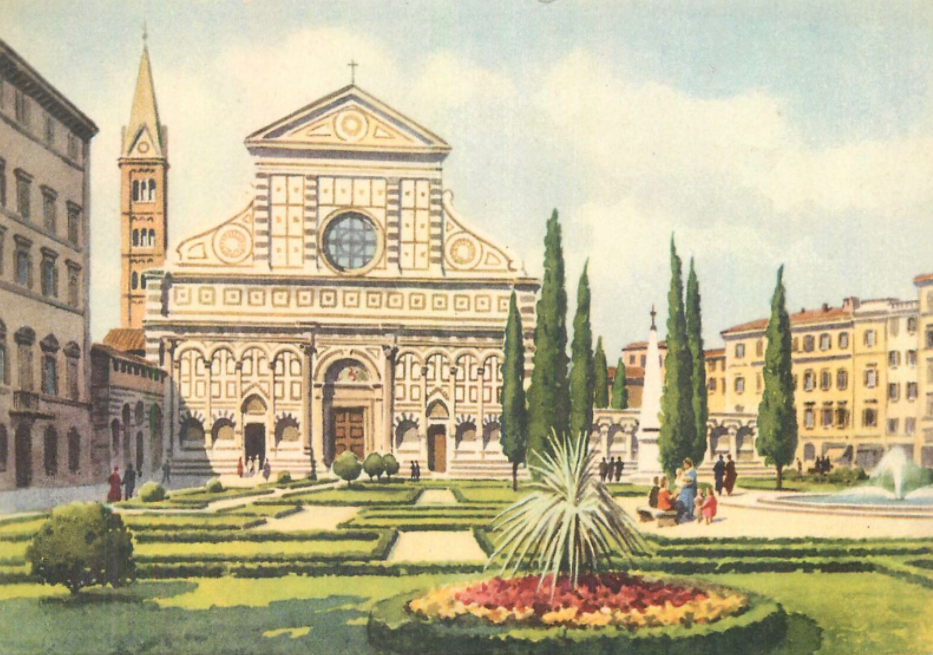 The Catholic order of Dominicans are the tenet preachers of the faith. The land on which their church was established in Florence was assigned to the order in 1221 – 800 years ago this year. Construction began around 1276 and like many churches in the era the building continued for several generations. Consecration took place in 1420.

The plan used in the construction is that of a basic basilica. The interior is T-shaped with a nave of more than 300 feet. Mostly, visitors are attracted to the stained-glass windows that are by far the most startling features of the interior. Many still contain original glass from the 15th century.

As is the case in most churches of the Renaissance it is the ancillary chapels that hold the art treasurers and Santa Maria Novella is no exception. Most notable are the frescos.

Domenico Ghirlandaio gained notoriety because he led a very successful atelier that included his two brothers, his brother-in-law, and his son. In addition to family several noteworthy apprentices worked and studied with Ghirlandaio, one of which was Michelangelo. Ghirlandaio’s own talent is seen in his frescos. He had an uncanny ability to render pictures of life and the living. His talent was the principal behind a major part of the art created in Florence after the 1470s.

Two examples from frescos found at Santa Maria Novella are pictured on the postcards featured below. Each is a detail from a larger work found in the Tornabuoni Chapel, the main chapel of the church. The frescos are an expansive and well preserved cycle of Catholic history. One part tells the life-story of the Virgin Mary.

This first example depicts the birth of Mary. 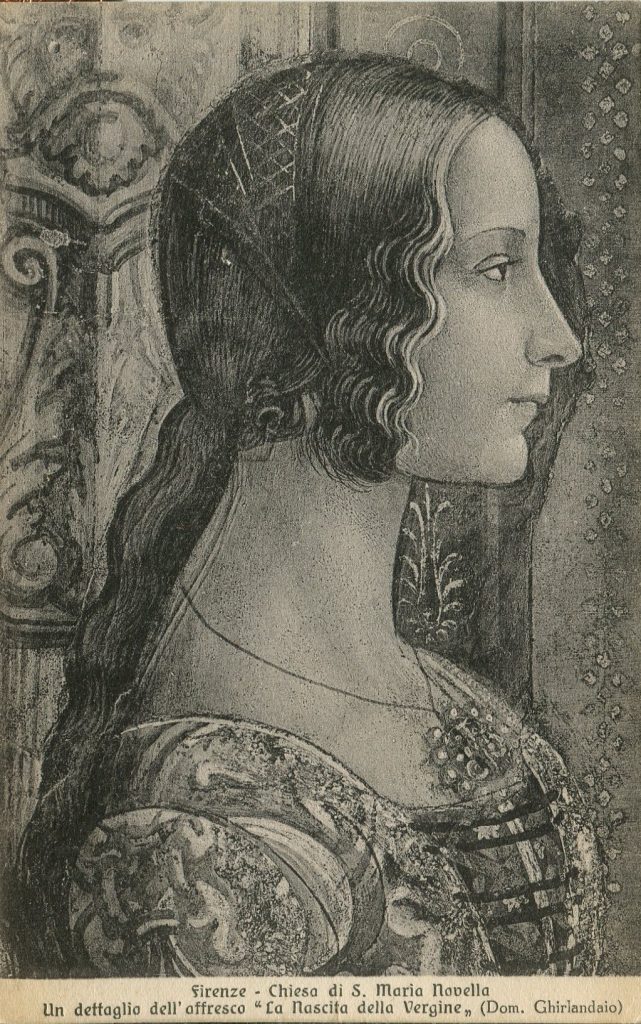 The caption is translated: Florence: The Church of S. Maria Novella, A detail of the fresco, The Birth of the Virgin, by Dom. Ghirlandaio 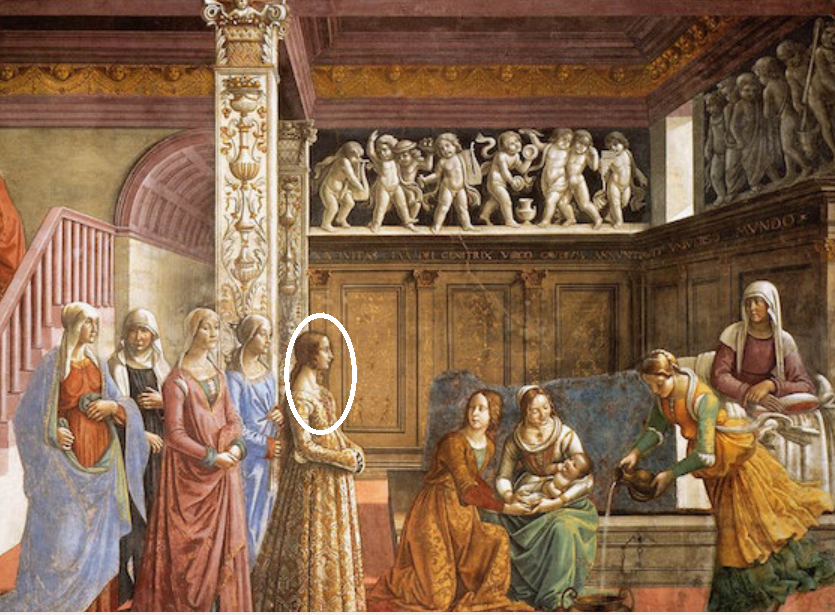 The Birth of the Virgin. The scene portrays the Nativity of Mary. At the right edge, Saint Ann looks on as three hand-maidens prepare to bathe the newborn.

At the left, a party of five Florentine ladies arrive to congratulate the mother.

The first of the ladies is thought to be the daughter of the nobleman Giovanni Tornabuoni.

The caption on this second example translated: Florence: The Church of S. Maria Novella, A detail of the fresco, The Visitation, by D. Ghirlandaio. 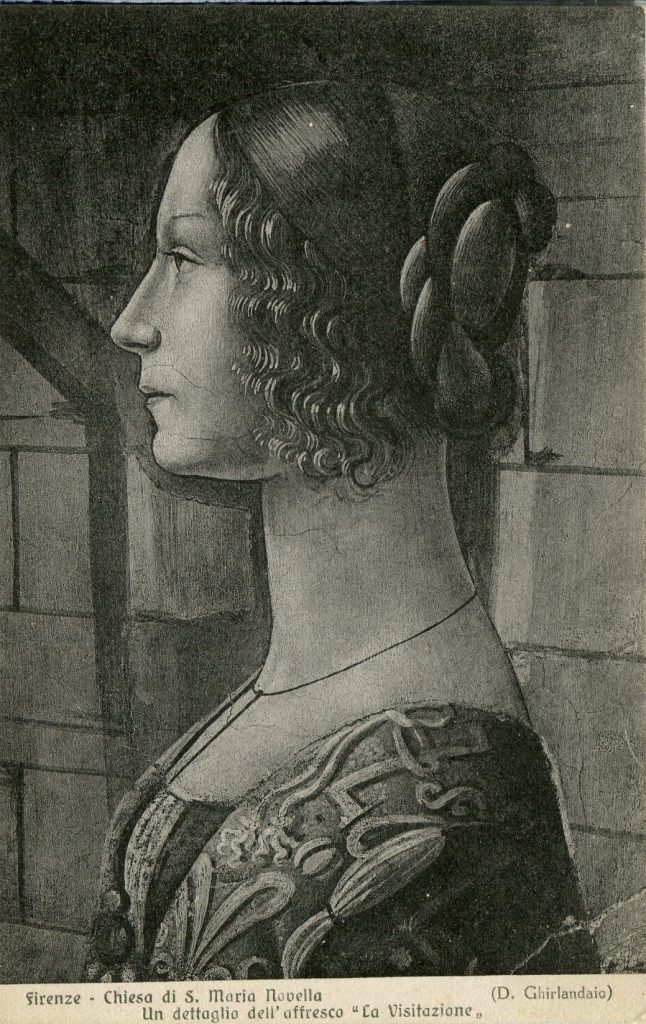 The caption on this second example translated: Florence: The Church of S. Maria Novella, A detail of the fresco, The Visitation, by D. Ghirlandaio. 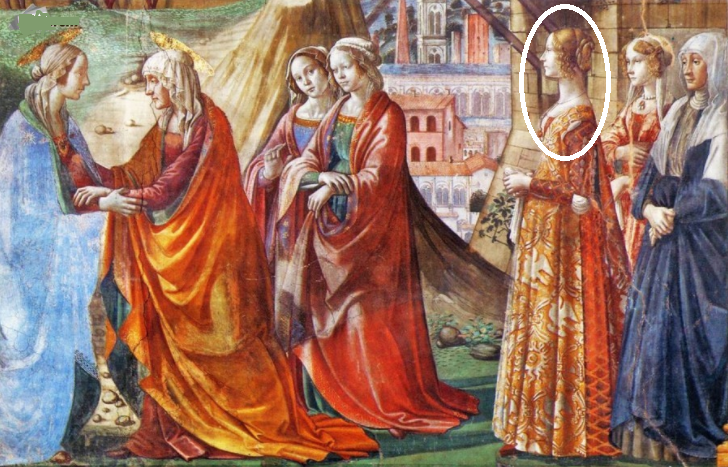 The Visitation by Ghirlandaio comes from 1491. Two versions of this work exist, the original, a tempera on panel painting is now in the Louvre in Paris. A fresco in the church of Saint Maria Novella renders the same content but on a much larger scale.

The scene depicts the meeting of Mary and Saint Elizabeth. Elizabeth honors Mary by kneeling.

The attending lady, whose face appears on the postcard is highlighted in a photograph of the fresco. 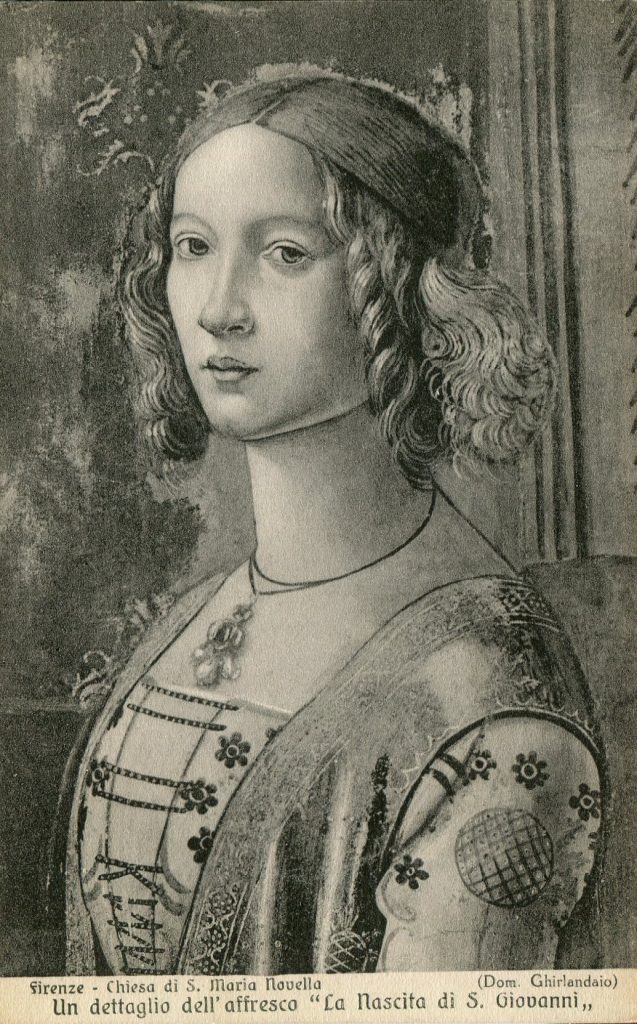 Florence: The Church of S. Maria Novella, A detail of the fresco,
The Birth of Saint John, by Dom. Ghirlandaio 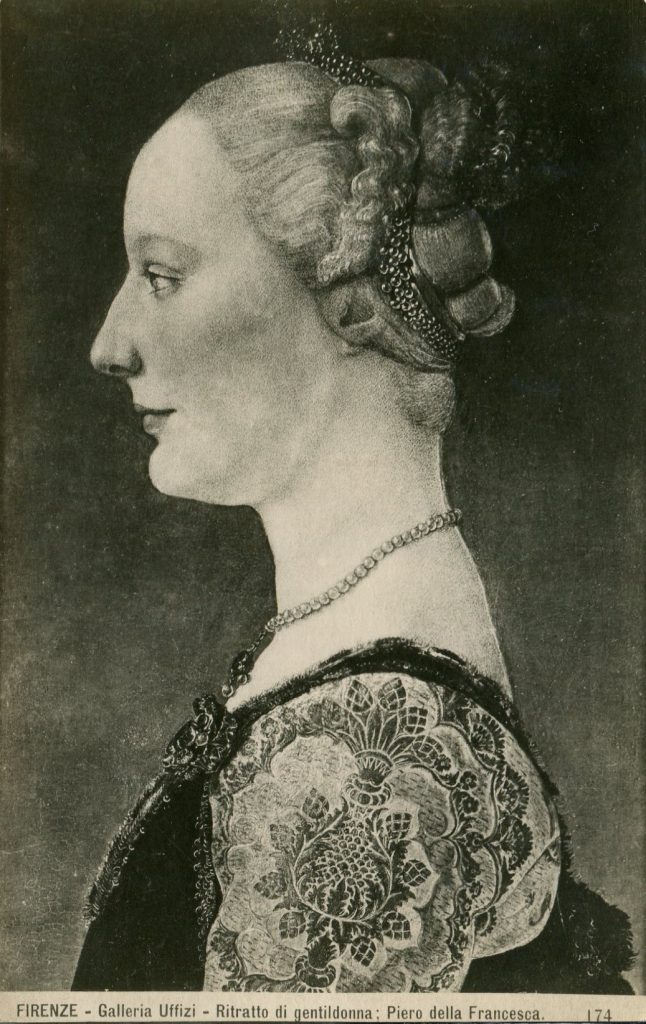 Other postcards show (left) a detail from The Birth of Saint John, also found in the church, and a portrait of a Noblewoman by Piero Della Francesca that is part of the Uffizi collection. 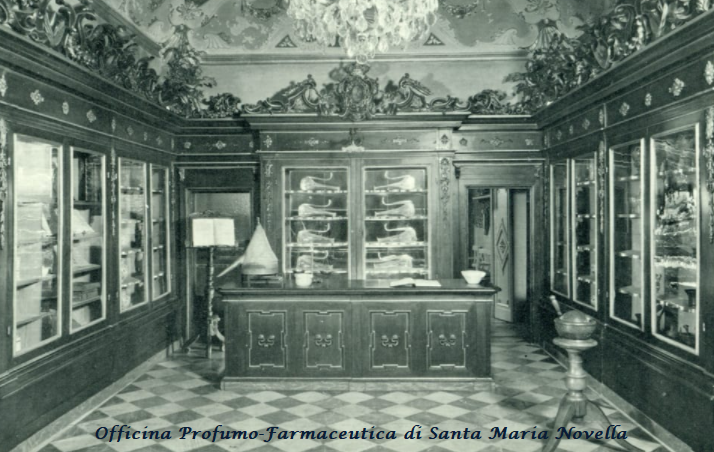 The postcard of the perfume and pharmaceuticals maker has been in a shoebox for far more than a dozen years. I remembered having it when I linked the postcards above to the Church of Santa Maria Novella. My curiosity would not be satisfied until I found some sort of connection. I didn’t need to look far; a CNN travel reporter did it for me.

Fragments of that November 2015 report are quoted here:

(CNN) — In an unassuming building on a quiet street in Florence stands what is probably the world’s oldest pharmacy and cosmetic shop.

It’s easy to walk right past the Perfume-Pharmaceutical Workshop of Santa Maria Novella. The rather plain entrance gives no inkling of the aromatic treasures within this 600-year-old establishment, which still uses ancient recipes to make its modern-day perfumes and skin care products.

Stepping inside, I’m engulfed by a potent fragrance of flowers and spices. The ambiance reminds me of a Florentine palace, with elaborate chandeliers, rich drapes, 18th century furniture and mellow lighting.

Despite its grandly upscale appearance, the store’s staff insist anyone is welcome to peruse its fragrant wares.

“This is a free space, not a fancy, high-street shop where customers must be impeccably dressed; you can walk in wearing shorts,” Gianluca Foa, the pharmacy’s commercial director says as he gives me a tour of the premises. As he shows me around, Foa regales me with the history of the place.

Dominican friars arrived in Florence at the beginning of the 13th century and converted the church of Santa Maria Novella into a monastery. They made an apothecary in the adjoining cloister and started cultivating medicinal herbs and dispensing balms, ointments, and other herbal remedies to the convent’s infirmary.

When the Black Death arrived in Europe in the mid-14th century, wiping out 70% of Florence’s population, the monks began making a rosewater distillate to use as an antiseptic to disinfect homes. The Acqua di Rose is still one of our best-selling products; of course, it’s now used as an astringent toner and perfume rather than a disinfectant.

I’m drawn to the row of bottles containing colorful liqueurs, especially the scarlet red one called Alkermes. A whiff of the bottle gives off the spicy aroma of cloves and cinnamon, with the underlying fruity notes of orange blossom. The scarlet color comes from coccinella, which are dried, crushed and used as a natural colorant, in keeping with the ancient recipe.

The monks made these liqueurs and elixirs from herbs and spices, and they were consumed as medicines in the infirmary. Alkermes was given to new mothers to recover from labor pains; nowadays it’s used as a food colorant in a typical Italian dessert.

The golden-colored Elisir di China, with quinine as an active ingredient, was used in the treatment of malarial fever. Today this slightly bitter liqueur is often served warm with lemon rind, as a post-dinner digestif.

The pharmacy came into prominence in the early 16th century thanks to Catherine de Medici, daughter of the most powerful family of Renaissance Florence. To commemorate her marriage at age 14 to Henry II, the future king of France, the monks of Santa Maria Novella created a special perfume named Acqua Della Regina (Water of the Queen).

The perfume is still available. It’s been renamed Acqua di Santa Maria Novella, but its unique scent of bergamot and aromatic spices remains unchanged. Under Catherine’s patronage, the pharmacy’s repute spread, and in 1612 it opened its doors to the public.

Most of the flowers and herbs used in the production today are sourced from the pharmacy’s own garden. There’s a fascinating display of centuries-old books handwritten by the Dominican monks, detailing their traditional recipes.

The next time you visit Florence, if you wish to visit the apothecary make your way to Via della Scala, 16 — 50123 Florence. Opening hours are daily from 9 AM to 8 PM. Have your hotel clerk or tour guide call ahead if you want a guided tour.

Ray Hahn is a retired educator, but he has never stopped teaching. His decades of researching, writing and editing a newsletter for the South Jersey Postcard Club has been a world-class education in trivia. In addition to postcard collecting, Ray’s other interests include history, genealogy, and touring the world with his wife Marie. Ray often advises his readers to "Join me as we explore the world one postcard at a time." Ray and Marie live in New Jersey.
PrevPreviousJ. C. Bardell and Walter Finn
NextA Social History of the Bicycle as Depicted on Real Photo Post CardsNext
5 Comments
Oldest
Newest Most Voted
Inline Feedbacks
View all comments
Sally Swift

My favorite place in Florence. And the pharmacy too. Thanks for reminding me to splash in some Acqua Di Gigli before I go out!

One of our favorite churches in Florence, have been there many times as well as the pharmacy & profumeria (seen in the movie Hannibal). Both are a short walk from the train station. Great story bringing back fond memories from my first visit in 1969.

The fact one of the Tornabuonis is thought to be depicted in the chapel named for her family suggests the concept of “naming rights” and attendant honors for sports arenas, among other facilities, is older than most people suspect!

Would love to be able to visit and see all these wonders in person, but at my age
l’ll do it with Ray Hahn’s help: one postcard at a time. Thanks, Ray.

Another reason I enjoy life, the articles on this platform! This was especially interesting.