James Charles Bardell was born on March 13, 1884 in Lawrence, Kansas. He was a tall, skinny kid who learned the printing business from A to Z at his after school job. Bardell left Lawrence at age 18 and took a job as a pressman with LaRue-Caton Publishing Company in Kansas City, Missouri.

It is almost certain that the job description of a pressman has changed in the one-hundred years that have passed since James moved to Missouri, but in modern terms it seems like a simple job with high responsibilities.

A pressman oversees the production of printed material, such as newspapers or magazines, on an offset printing press. The pressman also oversees other workers and ensures the product passes inspection. Bardell was good at his job and his advancements came quickly.

On March 7, 1905, James married Mary Furey in Denver, Colorado. That was his first move west, but Mary’s and his address changed frequently in the next dozen years. When it came time for young men to register for the Selective Service Act of 1917 James Bardell complied and listed his occupation as a self-employed postcard publisher. His address at that time was San Francisco, California, and his business was located at 215 Leidesdoff Street.

The Hi-Gloss Printed Photo Postcards here are samples of Bardell’s work. It is unsure if Bardell knew and understood the conflicting attitudes of his time pitting black and white photography against color photography.

In the 1930s the debate raged. It was conceded that pioneer photographers shot in black and white because they had no other option. Color was the wave of the future, but those who continued to use monochromatic film saw themselves as practicing photography in its purest form. Anyone could take a good color photograph, but the critics would say, when you remove the color the emphasis shifts to the compositional elements of the image. Qualities such as line, shape, texture, contrast, and tonality come into play.

Muir Woods National Monument opened in January 1908. Named for the Scottish-American naturalist, author, environmental philosopher, the 550-acre park is a perfect locale for learning and understanding natural beauty at its best. Several famous photographers, including Ansel Adams, have worked in the area at different times, but none of Bardell’s images credit a photographer, except that the photo is the property of the Redwood Empire Association, 85 Post Street, San Francisco, California. Such a pity, as these are exceptional. 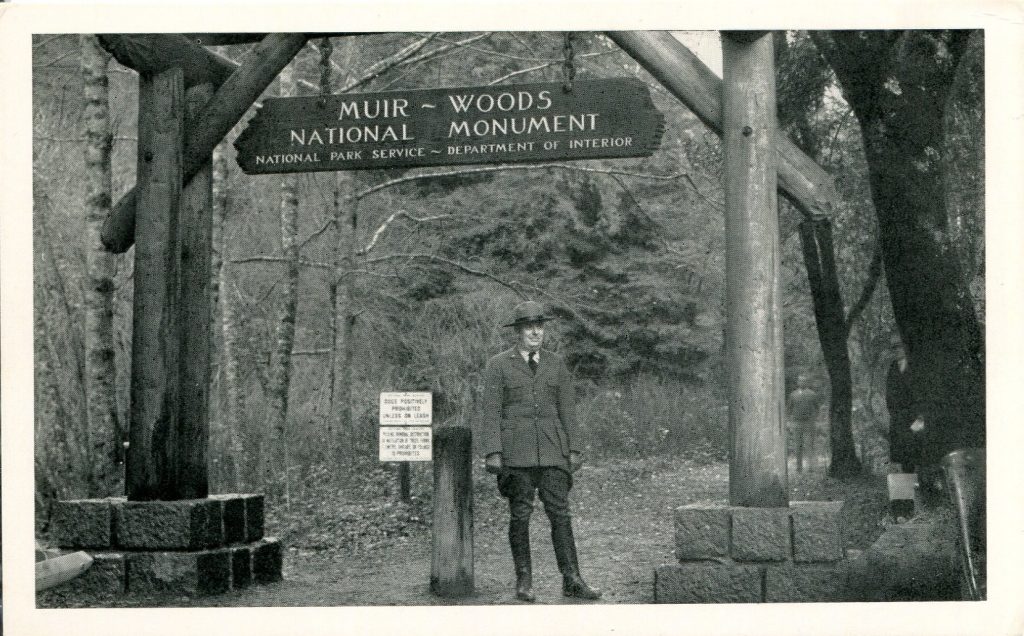 The entrance to Muir Woods. This famous natural monument, named for the great naturalist John Muir, contains a fine stand of sequoia sempervirens, the mighty redwood of California. Standing at the entrance to this grove in the Redwood Empire is Custodian Walter Finn.

Walter Finn served as the custodian at Muir Woods for nearly two decades. He lived on park property with his wife Margery. 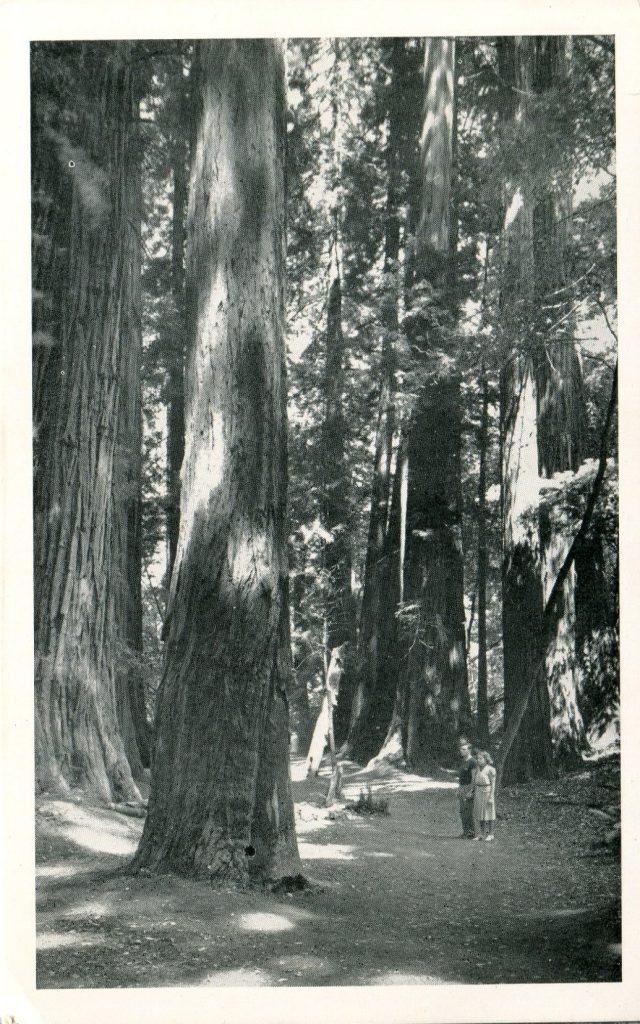 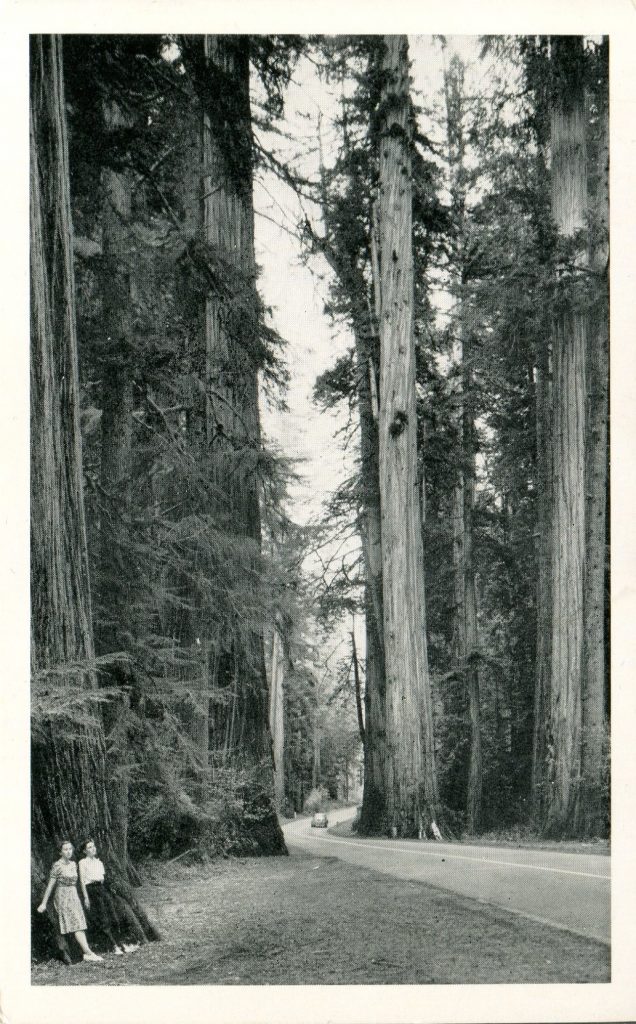 (Left) Muir Woods National Monument is just a few minutes automobile drive from San Francisco across the great $50,000,000 Golden Gate Bridge. This grove contains some of the most beautiful and representative giant redwood tree; … rare and delicate ferns and redwood burl growths indigenous to the Redwood Empire counties. Visited annually by people from every state in the Union as well as from many foreign countries. 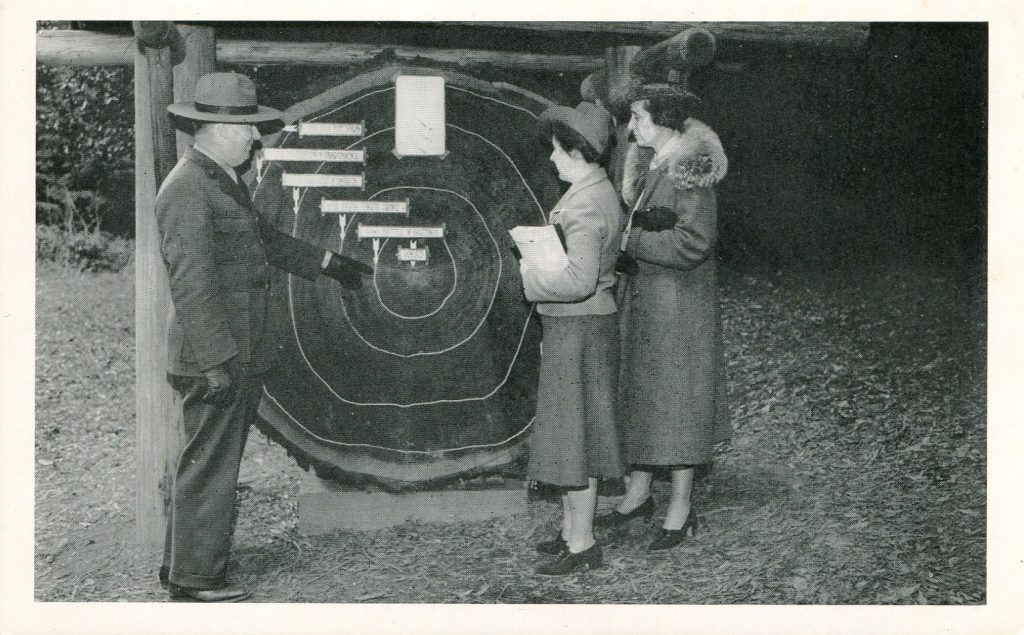 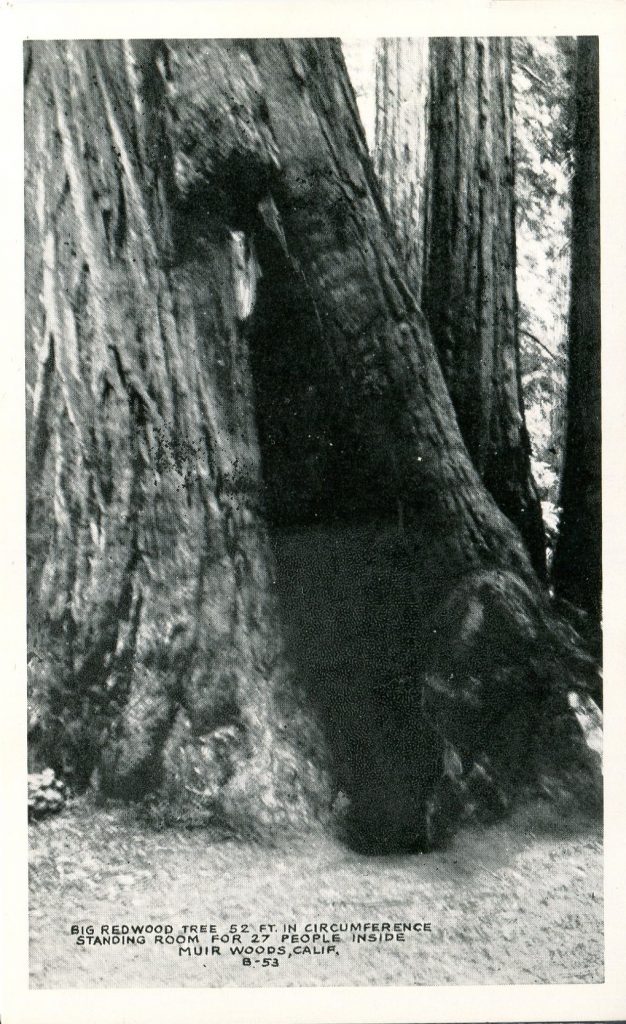 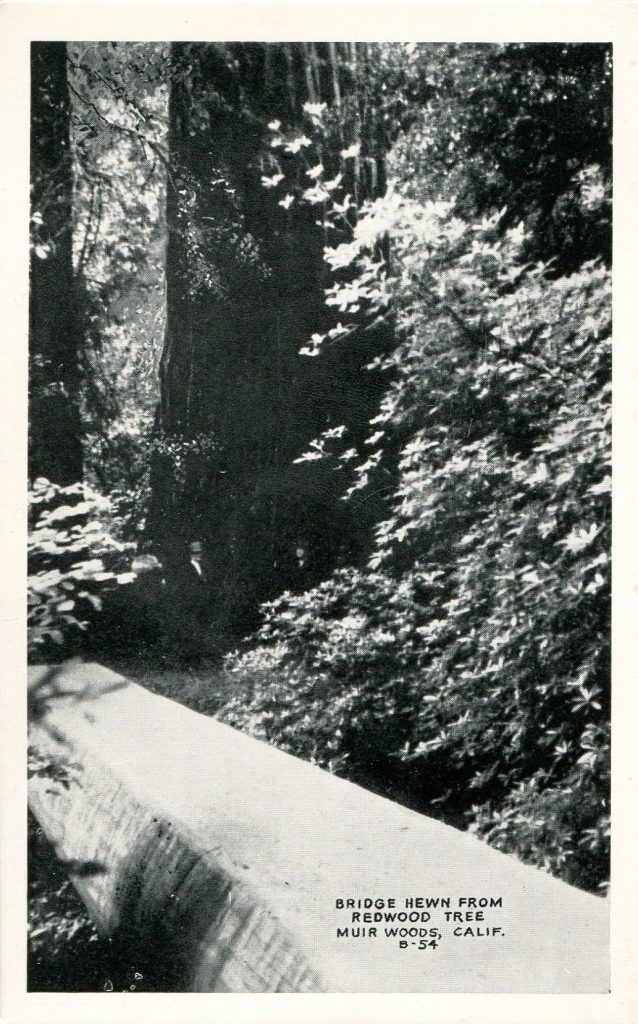 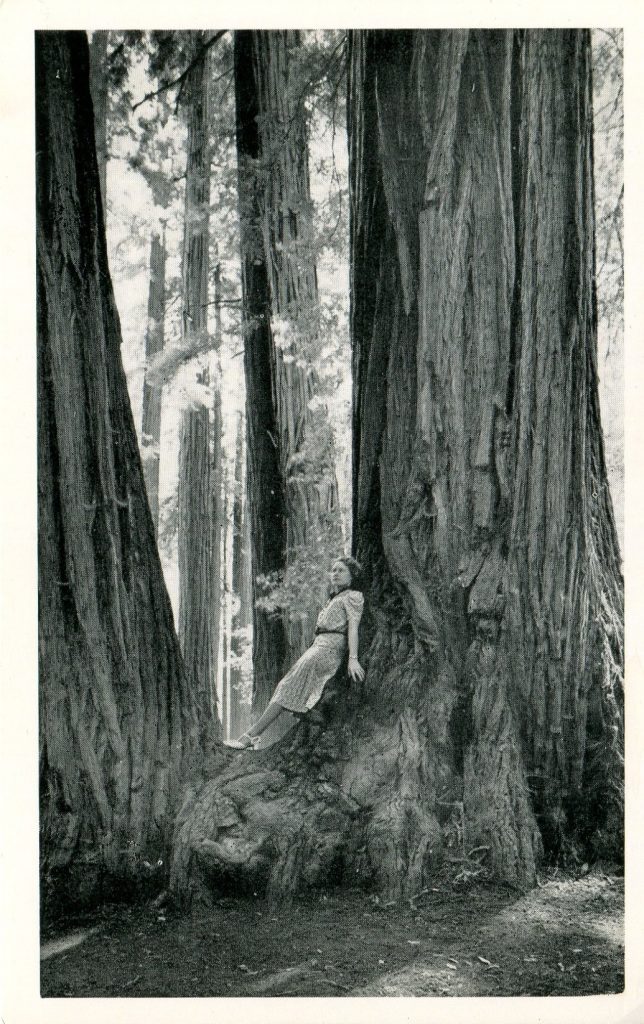 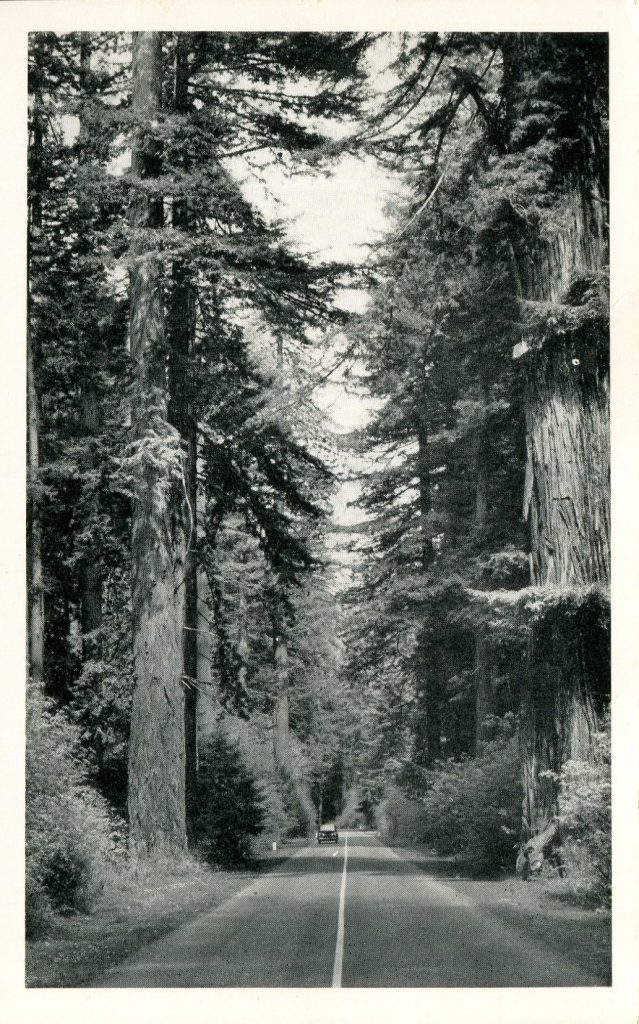 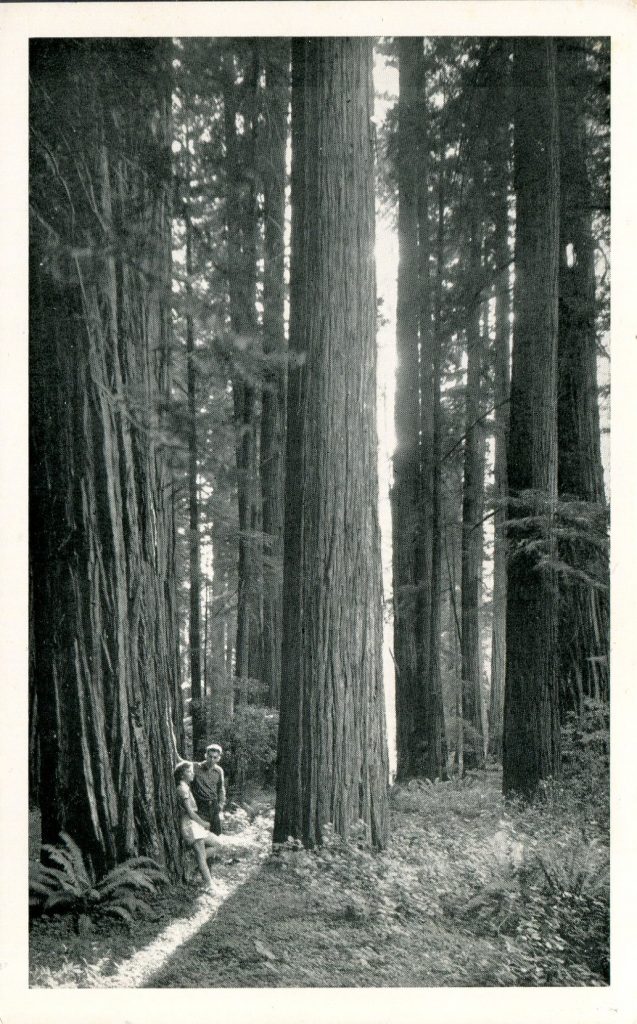 (Left) Charming first acquaintances with the giant trees of the Redwood Empire are made in the Muir Woods on the shoulder of Mount Tamalpasis across the Golden Gate from San Francisco, in Marin County. Here is a visitor at the base of a rugged sequoia.

(Center) Avenue of giant redwood trees…. Many of these trees are thousands of years old and hundreds of feet tall – the tallest living tree in the world being a redwood 364 feet tall.

(Right) Giant Redwoods of the Redwood Empire are hundreds of feet tall and thousands of years old. Here nature presents the ultimate in untouched beauty.

The Redwoods in the Muir Woods National Monument continue to grow.

The Staff of Postcard History offers this article for your enjoyment. It is a combined effort of many: our publisher, editor, webmaster and collectors/contributors far and wide. Please use the COMMENTS feature below to let us know how we're doing.
PrevPreviousShopping American Style
NextFrescos in FlorenceNext
2 Comments
Oldest
Newest Most Voted
Inline Feedbacks
View all comments
Bob Kozak

The redwoods are on my list of things to see if I ever make it to California.

I love reading these short, interesting tidbits of history. They are truly enriching.