Postcard History Brings you
an Easter Sunday Quartet of Postcards

Happy Easter From Chickland
By Raphael Tuck and Sons 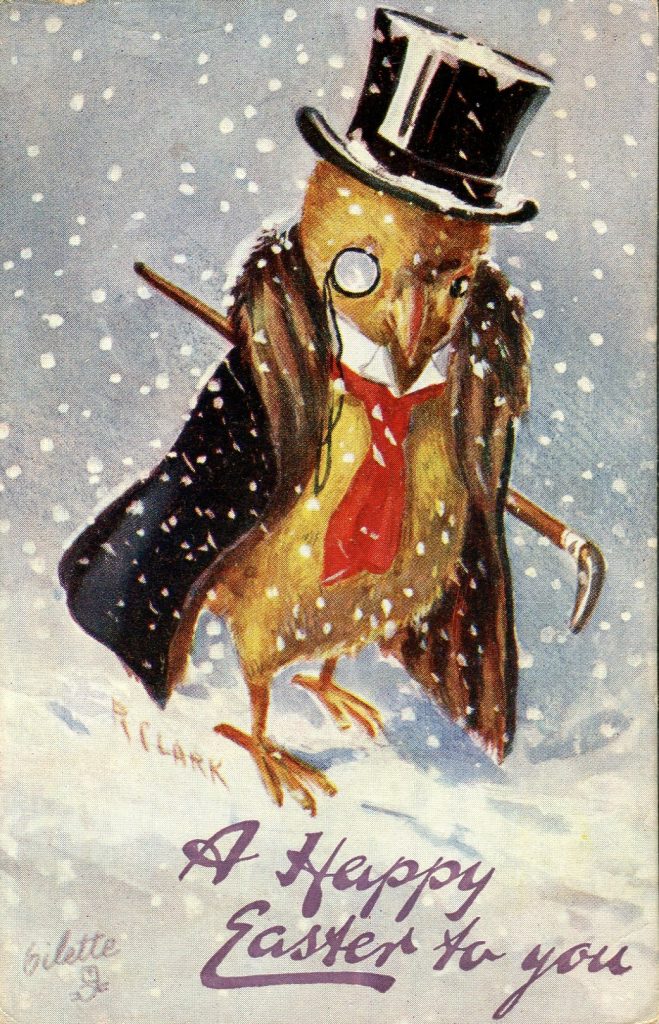 The New York office of Raphael Tuck & Sons published a rare 12-card set entitled Easter in Chickland. The signed-artist was “R. Clark” (there is conjecture that “R. Clark” is Rose Clark, a highly-skilled artist and photographer from Indiana, but it is a weak and unlikely suggestion). The set was made for sale only in North America around 1920, however some of the images appeared in sets for sale in England and France as early as 1913 without the Easter greeting.

The theme of the set is Easter Chicks in their Sunday Best finery and the always unpredictable weather at Easter. This example envisions snow at Easter; others in the set show rain, more snow, cold, wind, and thankfully one card presents a glorious sunny day in Spring.

“A Happy Easter to you”

Easter Morning at the Russell Hotel
By Frank 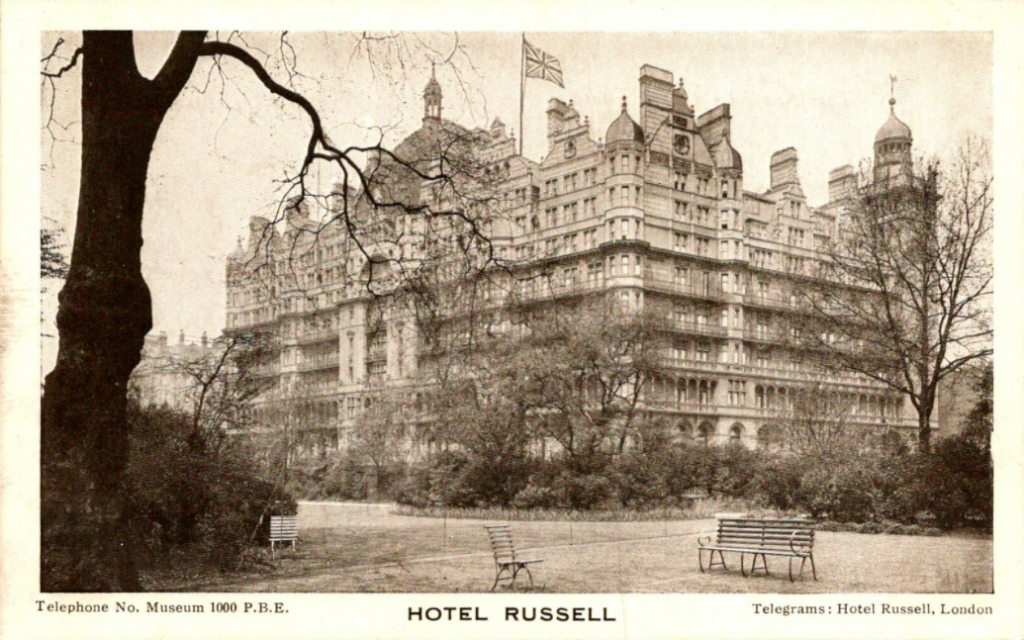 [Editor’s note: The Russell Hotel sits at 1 Russell Square, in the Bloomsbury neighborhood of London. The card below is dated by the sender on Easter Sunday morning in 1904. Apparently, Frank was a lone American awaiting the noonday train from Waterloo Station to Southampton where he planned to board a ship bound for New York City. Frank’s penmanship most likely never won an award for neatness, ergo the message is transcribed to assist our readers.] 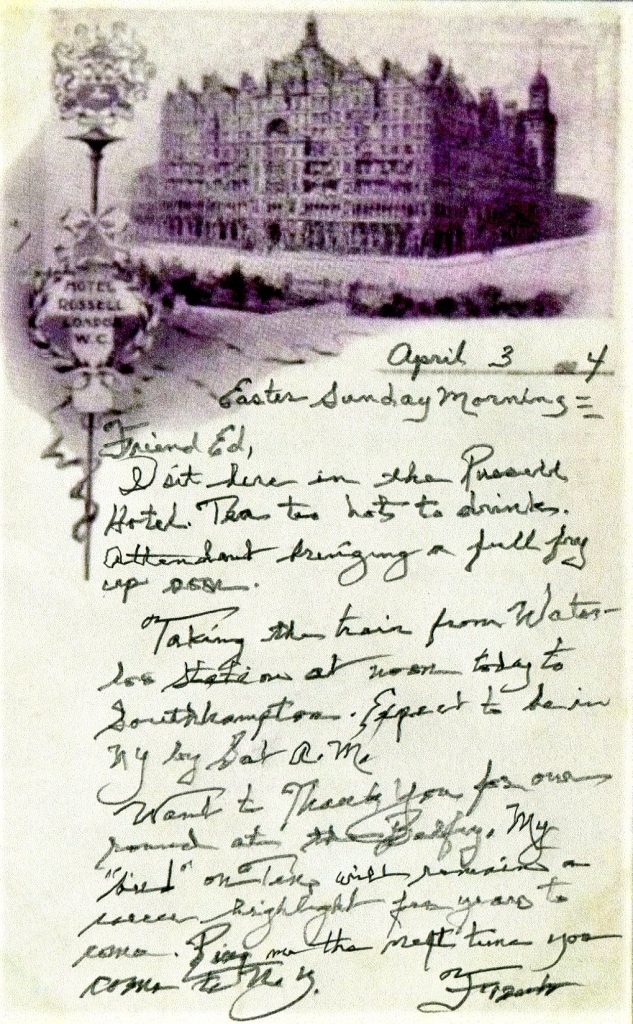 I sit here in the Russell
Hotel. Tea too hot to drink.
Attendant bringing a full fry-
up soon.

Taking the train from Water-
loo Station at noon today to
Southhampton [sic]. Expect to be in
NY by Sat AM.

Want to Thank You for our
round at the Belfry. My
“bird” on Ten will remain a
career highlight for years to
come. Ring (?) me the next time you
come to N.Y.

The Easter Bunny was a popular subject on greeting postcards so common in the early twentieth century. A fun, uniquely American version of these postcards were those that identified the Easter Bunny as Brer Rabbit.

During my quest to collect vintage holiday postcards, I discovered a few on the internet. I found them interesting and collected about ten different Brer Rabbit Easter postcards.

The history of holidays in America is a mix of different cultures coming together. These postcards are a forgotten example of the mixture and confusion of cultures that happens.

The tradition of an Easter Rabbit came to America in the 1700s with German immigrants. The Pennsylvania Dutch continued the old-world tradition of the “Oschter Haws” or Easter Hare, when their children made nests or left their hats and bonnets “out” on Easter eve for the Easter Hare to fill with eggs and treats.

The Easter Bunny tradition became popular with mainstream America during the Victorian era when baskets replaced nests and hats.

Brer Rabbit was part of the African folkloric tradition. The hare as a trickster may have come from the African tradition of the Asante-Twi speaking people. The trickster is a character that uses intelligence and plays tricks to survive instead of bodily strength.

I have two different sets of postcards and two single cards portraying Brer Rabbit as the Easter Bunny. On all of them there are cute verses that tell the receiver about Brer Rabbit’s Easter activities. 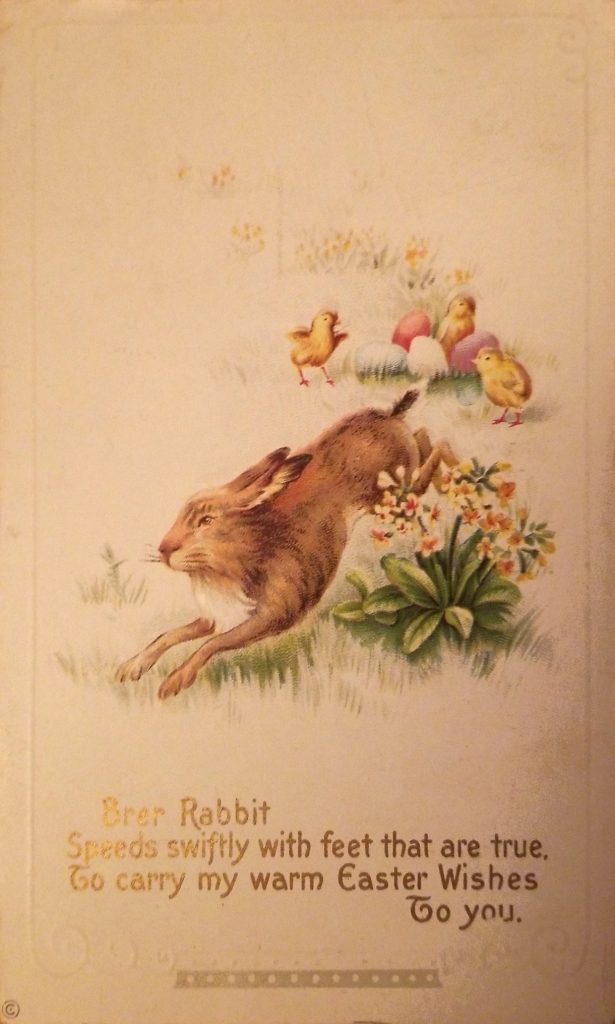 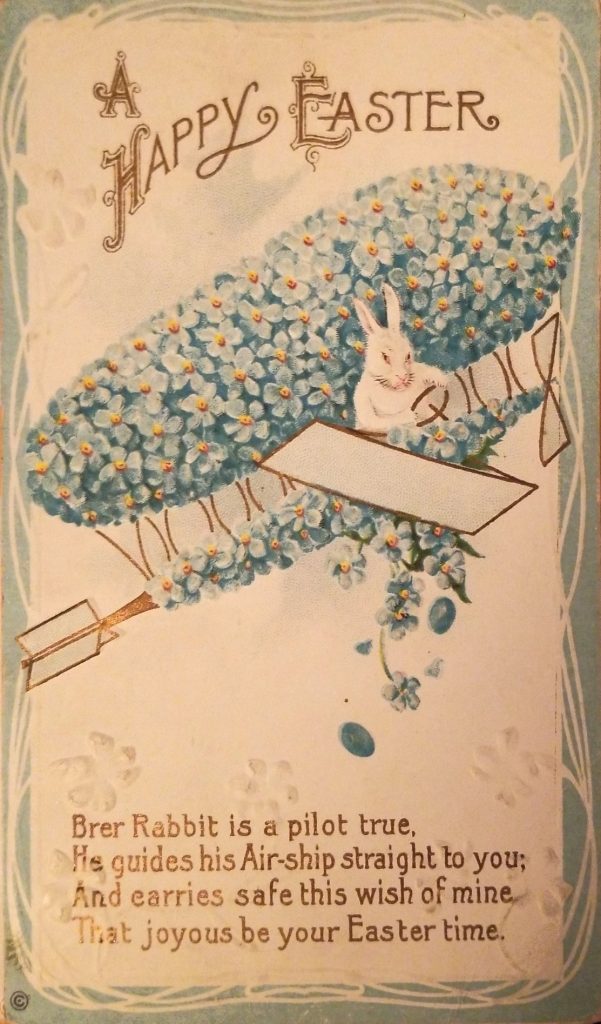 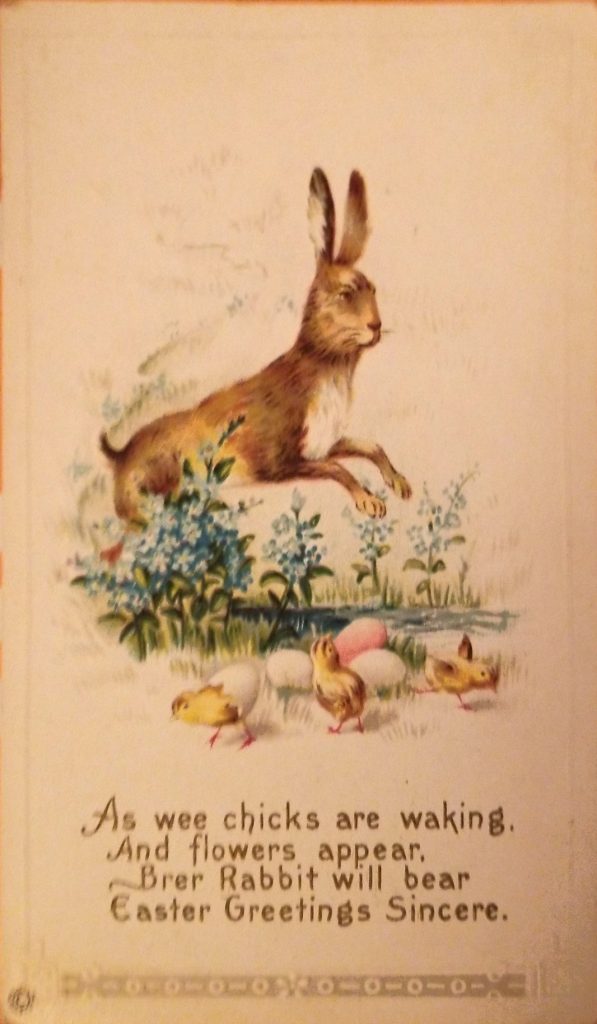 On two of the postcard Brer Rabbit is brown and plays in the grass with baby chicks, yet another card shows Brer Rabbit as a white rabbit flying an airship with wings covered with red, pink, or blue flowers. There is no information of the maker of the cards, but it does say on the front made in U.S.A. 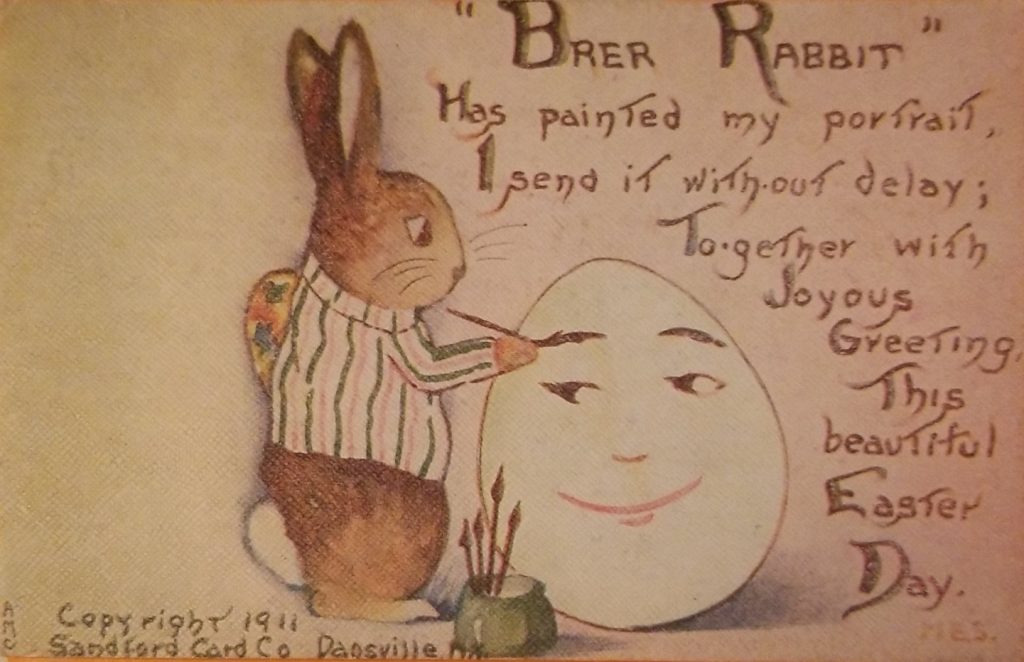 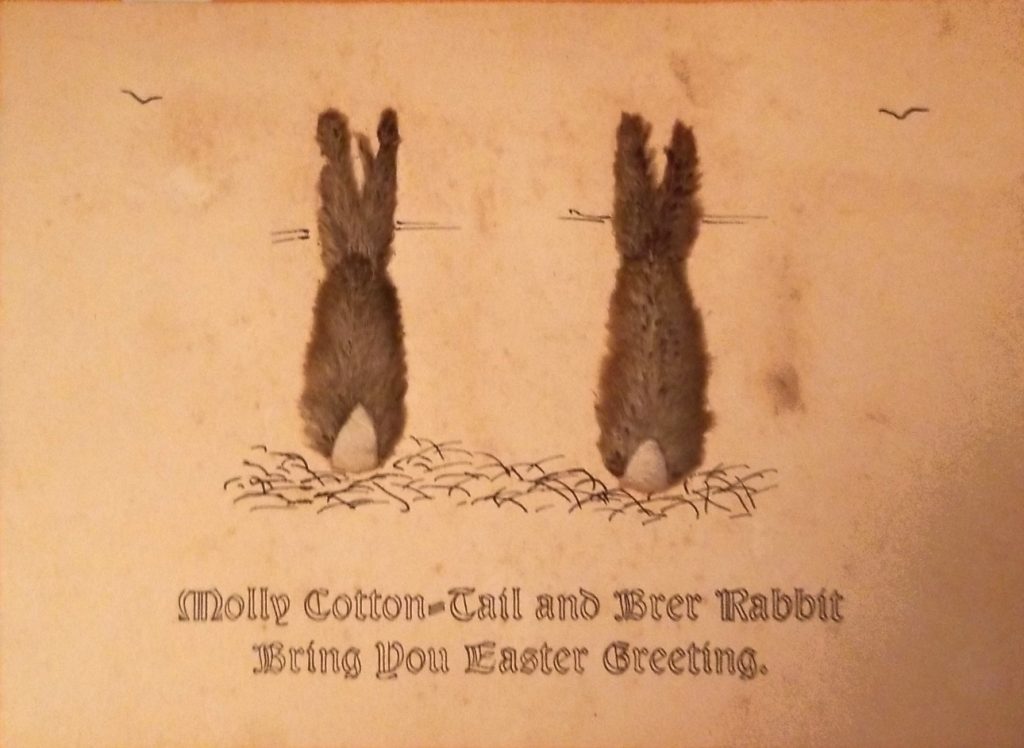 One has a rabbit standing on his hide legs wearing a cute striped jacket painting an Easter egg. This card was made by the Sandford Card Company of Dansville New York, copyright 1911. The other has two bunnies made of pussy willows. It is marked with pussy willow bunnies, copyright 1903 by Helen Phelan. Brer Rabbit is joined on the card by a female bunny named Molly Cottontail.

One stanza recalls the briar patch as in the story “The Wonderful Tar Baby” with Brer Rabbit.

“Molly in the bramble-briar
Let me get at little nigher
Prickley-pear it sting like fire
Do please come pick out the briar.”

Molly also shows up on Easter postcards of the period by herself as a female Easter bunny.

At some point Brer Rabbit and the Easter Bunny came together in popular culture. From what I can find on the postcards and in old newspaper articles this version of the Easter Rabbit was popular between 1900 and 1940. A forgotten but still interesting fusion of folkloric characters from different cultures come together in the American melting pot.

A sunrise church service on Easter Sunday has been traditional in most protestant congregations for nearly 300 years. The first recorded sunrise worship was undertaken in 1732 by the unmarried men in the Moravian community in the hills of Saxony. Their devotion was a off-shoot of the earlier all night vigil. Near the end of the vigil the men would move to “God’s Acre” (the village cemetery) to sing hymns of praise to Jesus, who according to church lore arose from his grave on Easter Sunday morning. In the early years, the singing was done with brass choirs accompanying.

In later years the entire congregation was invited to participate in the sunrise event. By the mid-1770s, through Moravian missionaries, the ritual literally spread around the world to every place the Christian faith was practiced.

In the United States – and especially in the South – sunrise services continue to be celebrated in cemeteries but are equally as popular in parks or other outdoor spaces where hundreds, thousands and tens-of-thousands of worshipers can gather to pray, sing, and rejoice in their faith.

The best known of the sunrise events in America are those in Maine on Cadillac Mountain, Bethlehem, Pennsylvania, near Atlanta, Georgia, at Stone Mountain, and with a group named the Salem Congregation in North Carolina. Other mixed-Christian groups gather in Wisconsin, Kansas, South Dakota, Oregon, Arizona, and Texas.

Two of the best attended sunrise services in America occur in the Garden of the Gods in Colorado Springs, Colorado and the Hollywood Bowl in Los Angeles, California.

In the years after World War II the 30,000 seats at the Hollywood Bowl would be filled with standing room only crowds, and too some 25 – to 40,000 people would gather to watch the sunrise over the red rocks in Colorado. 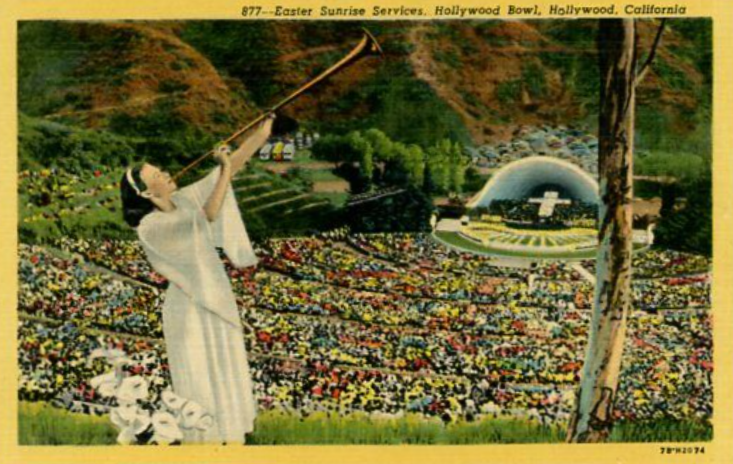 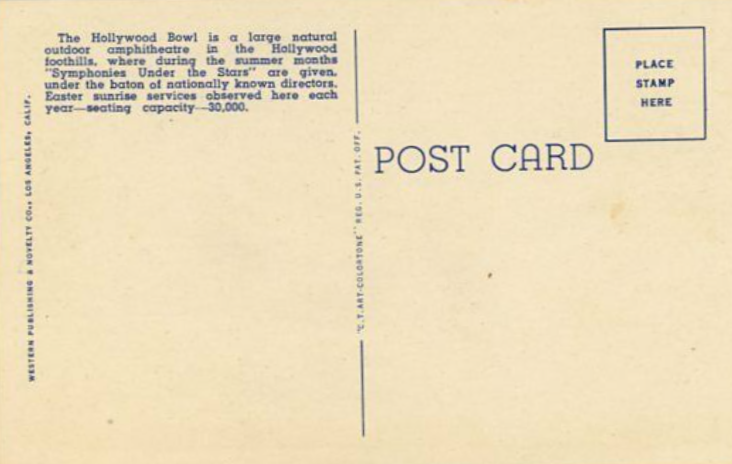 The Hollywood Bowl is a large natural outdoor amphitheatre in the Hollywood foothills, where during the summer months
“Symphonies Under the Stars” are given under the baton of nationaly known directors. Easter sunrise services observed here
each year – seating capacity – 30,000. 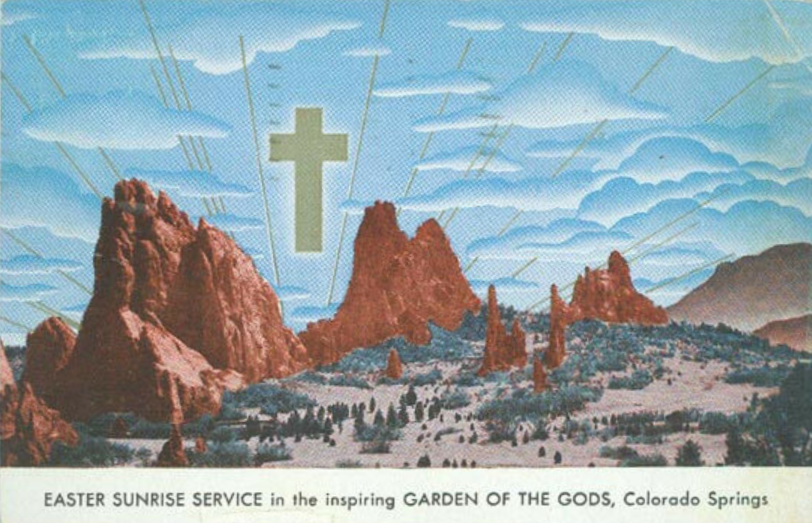 The Colorado service was well advertised using postcards. In the late-1940s the service was broadcast by the Columbia Broadcasting System. CBS went the extra-mile for their listeners, the service broadcast was staggered (and repeated) by time zones. 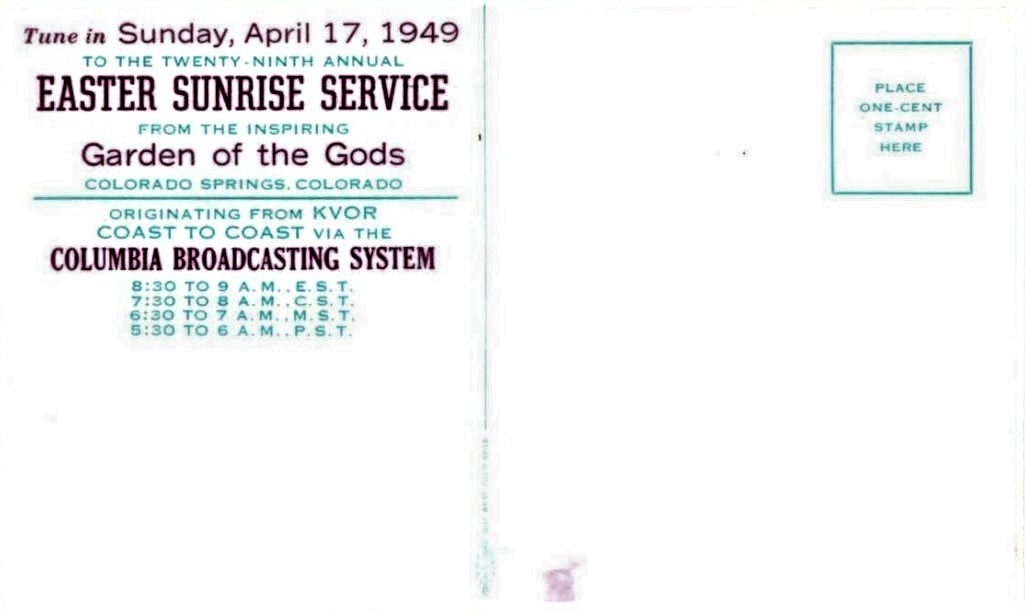 [Note: A card like the one above has been found, addressed to Milwaukee, Wisconsin on April 18, 1949. The message reads: Dear Grams, I listened to this. Love Susan.]

In addition to this Easter greeting from Postcard History
the staff here adds a warm and heart-felt
Happy Passover!

The Staff of Postcard History offers this article for your enjoyment. It is a combined effort of many: our publisher, editor, webmaster and collectors/contributors far and wide. Please use the COMMENTS feature below to let us know how we're doing.
PrevPreviousSouth Dakota’s National Treasure
NextApril 2021 Postcard History Quiz #4Next
1 Comment
Oldest
Newest Most Voted
Inline Feedbacks
View all comments
Bob Kozak

Obviously “springing forward” to Daylight Saving Time was not done as early in 1949 as it is now!