The Murder of Laura Foster

These very unusual postcards, published for the Parkway Museum with a 1960 copyright, recently discovered in a box of unsorted cards for sale at 50¢ each, tell a very unusual tale. Have you ever heard of a fellow named Tom Dula?

Before we talk about Dula, lets examine the images. On the left is Edith Carter’s own interpretation of Laura Foster. The other is also a painting by Carter showing a person named Ann Melton. 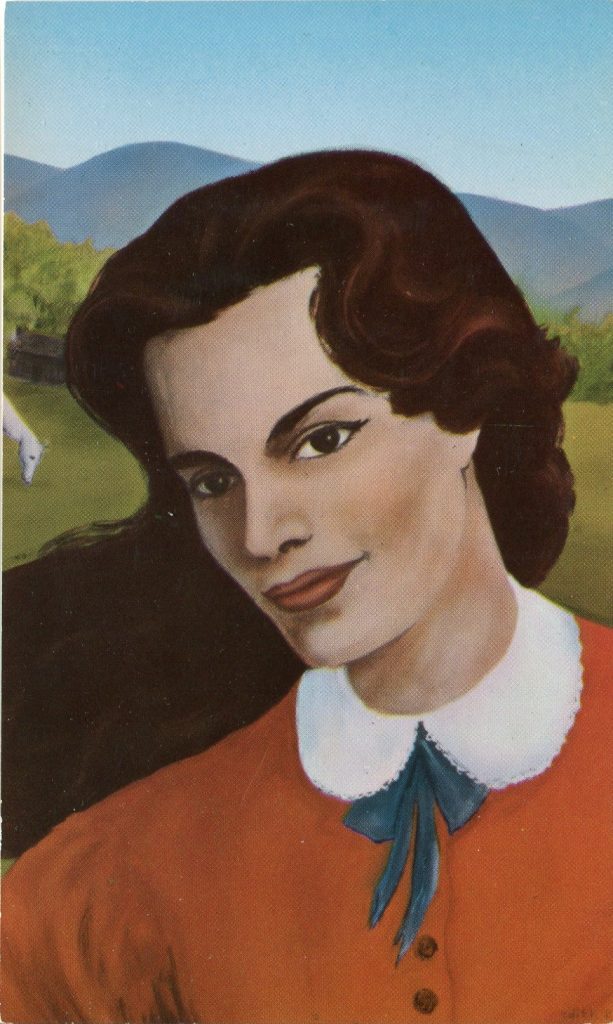 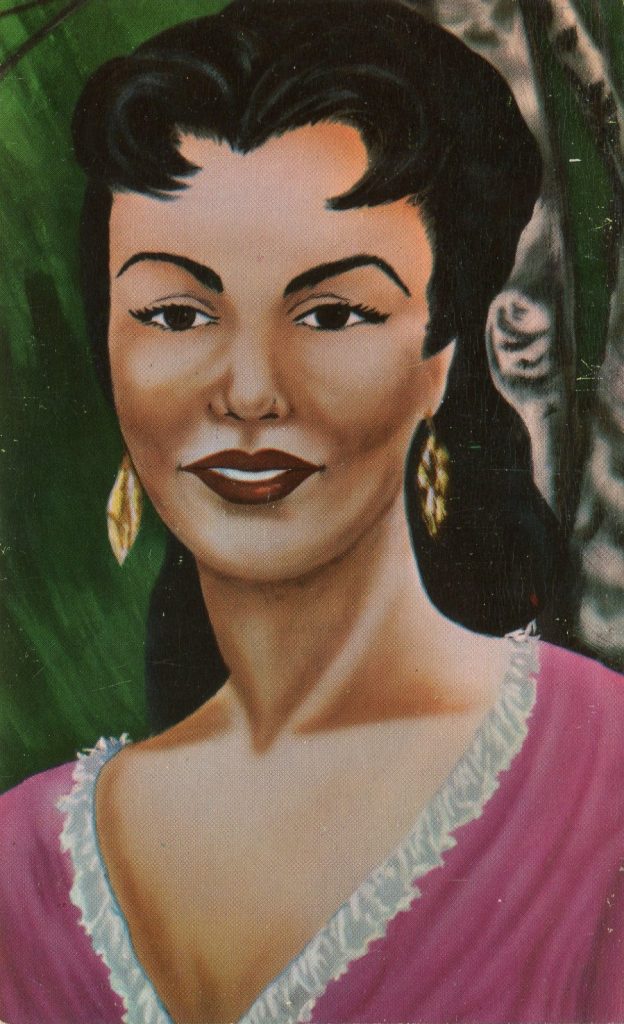 Portraits of Laura Foster and Ann Melton by Edith Carter

[Finding information on Edith Carter is proving to be difficult. The name is common in the United Kingdom and the American south. In a recent search, fourteen women with the name Edith Carter have died in the last 22 years. The gambit ranges from a seamstress in a London suburb to a schoolteacher in Texas. Information about the artist is however immaterial to this story.]

Without calling the fashion-police it may appear to the casual viewer that the garb in which these women are portrayed is much too modern for the mid-19th century, but as readers let’s chalk-up Carter’s choice to artist license.

Ann Foster (right) married John Melton in 1859. Her husband was a farmer and a Confederate soldier who took part in the Battle of Gettysburg. Laura Foster was her cousin.

Thomas Dula was a neighbor and close friend of Melton and served with Melton in the 42nd North Carolina Infantry that participated with the Confederate Army at Gettysburg. Thomas and John were captured by Union Forces, but when the war ended in April 1865, they were released, and both returned to their farms in Wilks County in the northwestern corner of North Carolina.

Tom was a 20-something young man when he returned home from his Civil War service. He soon struck a relationship with Laura Foster. Tom had known the Foster cousins since he was twelve years old. Family legend takes a hard turn when in May 1866 it was discovered that Laura was pregnant, and the young couple planned to elope. On the morning of the 25th, Laura left her home and was never seen alive again.

The gossip and rumors started immediately. The cousins blamed each other, the accused was said to have exacted revenge for contracting “the pock” (syphilis) and where no truth was common knowledge, people made false claims for and against everyone involved. Including the local doctor.

Dula was the one who ultimately paid the price for deeds-most-foul. He was tried (twice), found guilty (twice), and hanged for the crime. In an account of his life, that he wrote (or told to a scribe) while in prison, he claimed that he, “. . . did not harm a single hair on that fair lady’s head,” a remark that he repeated as he stood on the gallows on May 1, 1868.

It was Dula’s younger sister who retrieved his body and buried him at the Tom Dula Grave Site along State Highway 1134 (Tom Dula Road), a mile from the intersection of State Highway 268, near Ferguson, Wilkes County, North Carolina.

Dula’s family name was pronounced by most in the area with a long A, thus he was known as Tom “Dew’ Lay.” Nearly a hundred years later and six decades into the 20th century a folk song entitled The Legend of Tom Dooley, was written based on the otherworldly happenings that surrounded the murder of Laura Foster.

The murder of Laura Foster is a cold case, but many mythical tales are still told. One of which is that Anne Melton confessed in a death-bed statement that she killed her cousin in a state of jealousy over her relationship with Tom, but never felt guilt because she had suffered a life of personal torment over her sin of killing Laura and begging Tom into helping her hide Laura’s body.

The Kingston Trio recorded a hit version of the murder ballad in 1958. Listen here.

Sing along if you wish:

The Ballad of Tom Dooley

This time tomorrow
Reckon where I’ll be
Hadn’t-a been for Grayson
I’d-a been in Tennessee (well now, boy)

The Staff of Postcard History offers this article for your enjoyment. It is a combined effort of many: our publisher, editor, webmaster and collectors/contributors far and wide. Please use the COMMENTS feature below to let us know how we're doing.
PrevPreviousThe Road To . . . Movies with Bob, Bing, and Dorothy
NextSecond Avenue: New York’s Yiddish RialtoNext
11 Comments
Oldest
Newest Most Voted
Inline Feedbacks
View all comments
Pat Dyer

Have heard and sung this song many times but never knew the story behind it.

Tom’s attorney was Charlotte attorney and past governor of North Carolina , Gov Vance. He is Considered not a very good attorney today.

I have never heard this story. Quite interesting!

WOW!!! And now we know the rest of the story… Absolutely fascinating… Thank you…

Apparently the Kingston Trio believed Tom was the murderer, considering the group could have easily rewritten the lyrics to say something such as “they say it was on the mountain/ that I did take her life”.

Being from NC and an actual cousin of Tom, this has been the topic of many discussions among the family. If the trial had taken place in present day, Tom would have been set free. Lack of evidence, speculation, etc would not have held up in a court of law. But it does make for good folklore and legend. Lift Up Your Head, Tom!

Ahh I live in the county where this took place, I met Edith briefly when she was still alive, I’m friends with her great niece. I’m pretty sure Edith owned a small historic site called “Whippoorwill”!

Check out Whipperwill Academy & Village in Ferguson, NC about Artist Edith Ferguson Carter.
She passed away in 2014 but, her Family still has the Tom Dooley Museum and Paintings about Tom Dooley and the Whipperwill Academy. The Museum Phone# (336) 973-3237.
Thank You for Keeping Edith’s Art Alive!! She is a Great Person!!!

I lived in Ferguson, North Carolina in the past and Edith Carter was my Friend. She encouraged me to start writing and singing songs and I write Historical Songs and I wrote a Song about Tom & Laura. You can hear my song about Tom Dooley and Laura Foster at http://www.reverbnation/debbieprice.

Correction on the spelling for “Whippoorwill.”
Correction for Tom & Laura Song By Debbie Price
https://www.youtube.com/watch?v=u0UqPEibwYE