Where oh, Where,
Has This Postcard Been? 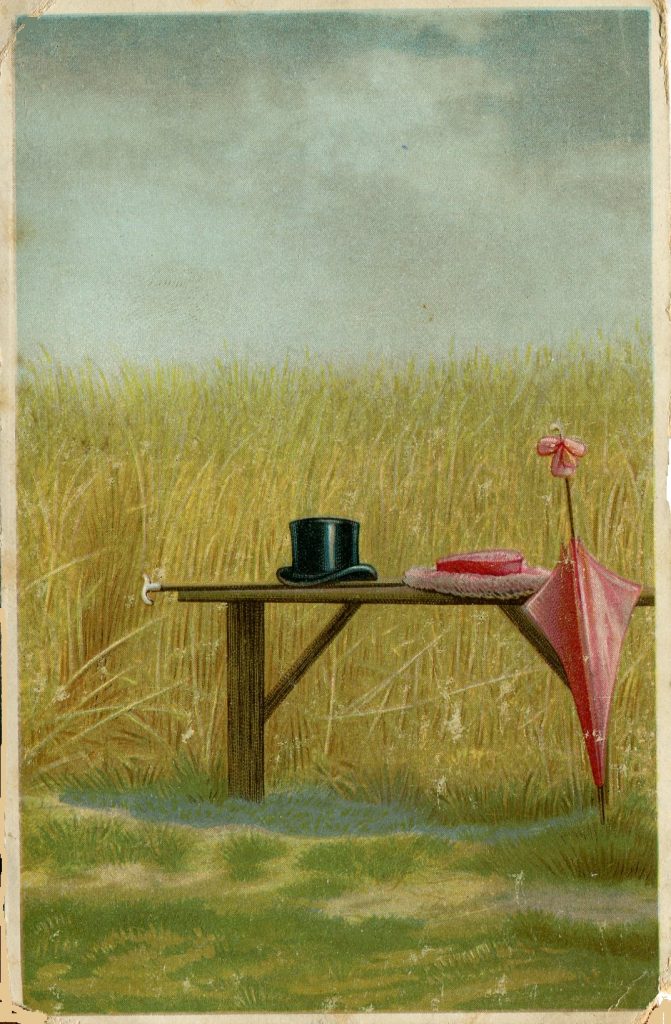 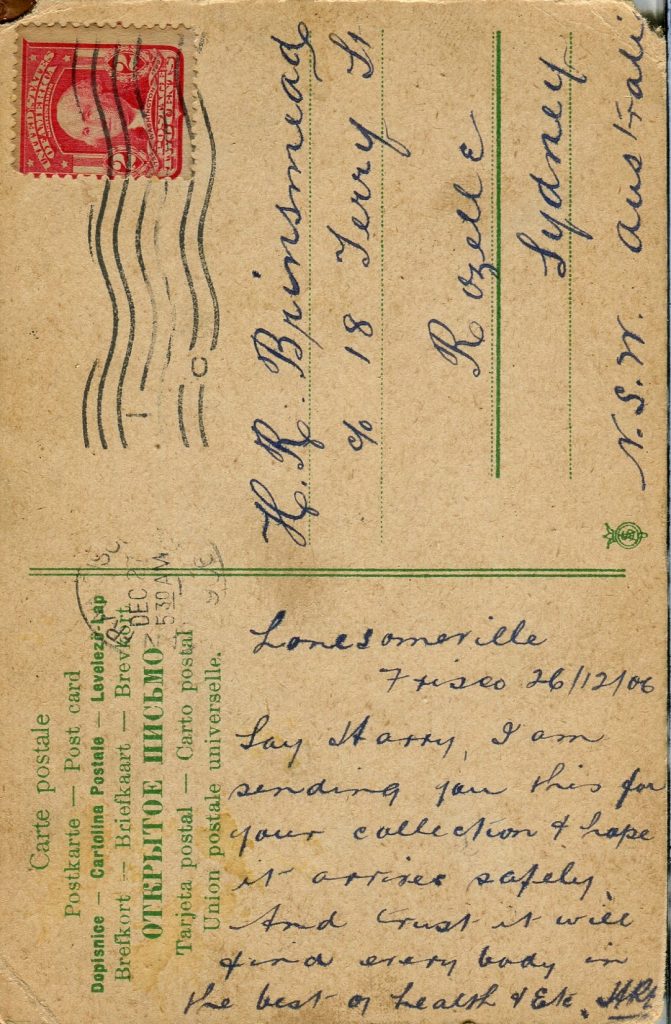 This card was found in a box of fifty-cent cards. It is more than 115 years old. It is dirty, two of the four corners are gone and a third is creased. The surface is scuffed in many places and the edges are rough and scarred.

The image is mysterious and unexplained for there is no caption. The story of the belongings left on the bench deserves telling, for they suggest a host of possibilities. The simple bench offers rest to all who pass by the edge of the wheatfield. It has a rural feel, but a gentleman’s top-hat and cane and lady’s hat and parasol await the return of their owners who are more likely to be city folk. Where are they? What have they been doing?

Without compulsion to create or relate the rest of the story, this writer does not know if the couple is standing by the edge of a lake outside the picture discussing the weather, picnicking on a flat-topped boulder nearby, or even enjoying a warm embrace someplace in the wheatfield. Reader, use your imagination.

The message by “HRB” was written on the day after Christmas 1906 in Lonesomeville. Apparently that location is an unspecified part of San Francisco. Although the Post Card rate was one cent in 1906, a two-cent stamp has been affixed to this card for it is about to travel more than seven thousand miles to Sydney, Australia. The stamp was cancelled at 5:30 AM on December 27, 1906.

The card has a divided back but carries the Universal Postal Union’s Carte Postale identifier. One line of which is written with a Cyrillic alphabet. There is no indication of a publisher, except for what may be a company logo that appears to be an A/S (or reverse) in a ring with a crown at the top.

The addressee is H. R. Brinsmead at 18 Terry St, Rozelle, Sydney, N.S.W., Australia. It would amuse me to know when the card arrived. If mailed in California at the end of 1906, how far was it into 1907 when it reached Harry Brinsmead?

So, is that where the story ends? Certainly, not, because during what was a very tumultuous century this card made its way back to the United States. Think of what happened after 1906 – a World War, the 1918 influenza pandemic, the greatest economic depression of all times, another World War, television was invented, the Korean Conflict, man went to the moon, the Vietnam War, and more. Through all that this card literally traveled around the world.

Where has it been? Perhaps at the bottom of a box of memories or stashed away for years in a collection of postcards owned by someone completely unknown to this writer or the dealer I bought It from.

The card however, even if it is dirty, broken, folded, and scarred has a future. It will be in my collection of cards that made me say, “Wow! Look at this.”

I can only add to the mystery. It must be a European card because of the divided back and the different language versions of “Post Card.”. England started using divided back cards in 1902 with other European countries then following. The U.S. didn’t allow them until 1907. Also, HRB wrote the date in the European style of day, month, year. So it appears that HRB brought the card to San Francisco to then send to Harry in Australia.

Since “HRB” says he is sending the card for Harry’s collection, I am wondering if Harry specialized in hats and/or umbrellas on postcards, or perhaps text-free images.

Can you show or send me an image of the back of the card To Australia for 2 cents ” and “To America by any means possible” as it may help me to understand what someone has done to a Tuck’s Oilette which is part of a set depicting the sheep industry in Australia.

I am a native San Franciscan and have never heard any area of SF referred to as “Lonesomeville”.
Might this refer to the emotional state of the sender? Interesting card. Thanks for sharing it.