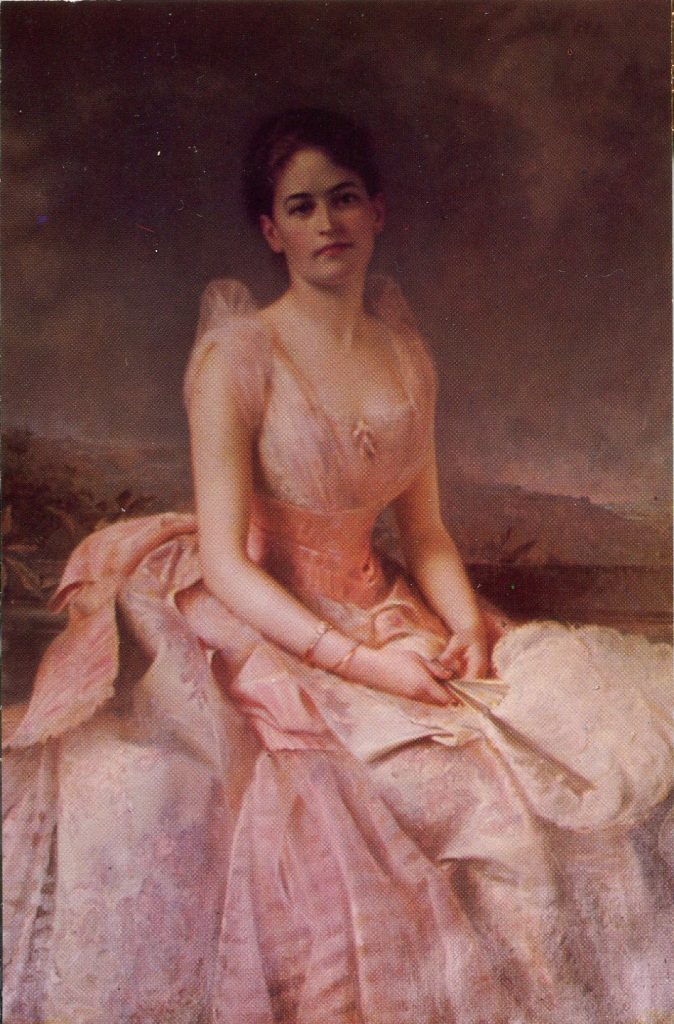 Juliette Gordon Low was born in Savannah, Georgia on October 31, 1860. Everyone called her “Daisy.” The Civil War raged at the front door of her home during her early years but she came from a family with strong and determined people willing to “stand on the line.”

This pre-1960s era chrome postcard, printed by the Walter Miller Company of Williamsburg, Virginia, shows her portrait by Edward Hughes. It was painted in London in about 1887. Mrs. Low is seen wearing the pink gown that she wore when she was presented to Queen Victoria.

In December 1886, Juliette married William MacKey Low. “Willy” was the son of a wealthy cotton-merchant who maintained homes in Savannah and London. It was a tragic marriage and it ended just before Willy’s death in 1905.

Organizational lore teaches us that Mrs. Low met Lord Baden-Powell, the founder of the Boy Scouts, in London early in 1912. Parts of their discussions in the weeks that followed inspired her to do for girls in America what Lord Baden-Powell had done for the boys of the United Kingdom. [Aside: there is a common error in most writings concerning Lord Baden-Powell that even appears in the Girl Scout website. He is frequently referred to as, Sir Robert. Robert Stephenson Smyth Baden-Powell was a 1st Baron. Being a Baron made him a Lord of the Realm – not a Knight.]

Soon after, Mrs. Low announced in a telephone conversation with her cousin that she had something for the girls of Savannah, and all of America, and all the world, and we’re going to start it tonight!

The first meeting took place in Savannah and it shattered several conventions of the time. Eighteen girls from different cultures and ethnic backgrounds gathered to form the first troop. Class, culture, ethnicity, even disabilities were ignored, every girl now had a place to grow up into adults with mature attitudes and well developed leadership skills. 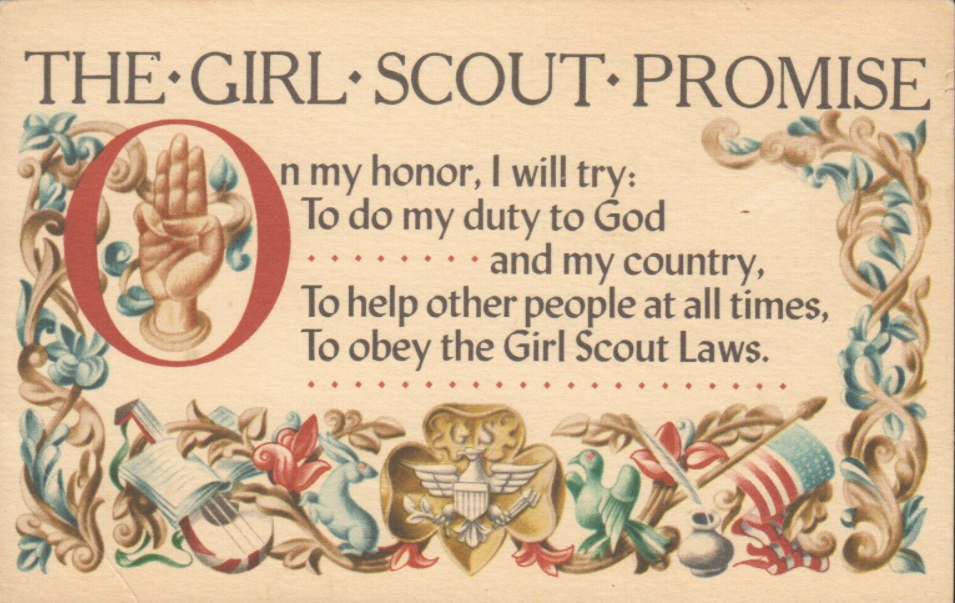 As a young girl, Juliette was quite daring, yet sensitive and curious. She knew how to be kind and humorous, and why it was important to care for others. She was interested in everything: athletics, the arts, animals, and nature. All those things and much more would someday become the bases of the Girl Scouts.

Mrs. Low was a plain woman, but she was cursed with hearing loss that hampered her all her life. Her disability, however, never hampered her skill as a fundraiser and public relations genius. She made thousands of friends and had even more supporters who generously provided funds for Girl Scouts because of their faith in the passion and determination Juliette Gordon Low had for her cause. 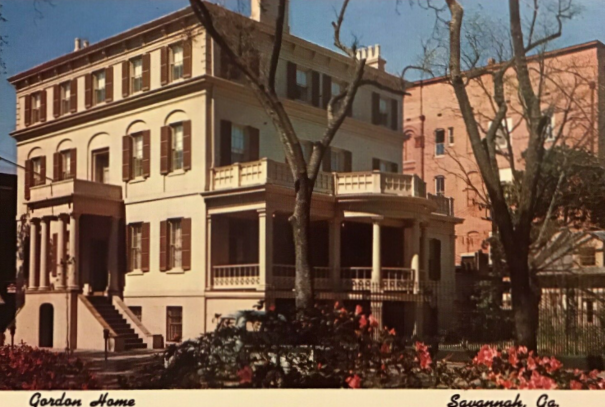 Juliette Gordon Low died January 17, 1927, at her home in Savannah, Georgia. A legacy honors her in places around the world. There are schools, camps, and scholarships in her honor in every major country. She has appeared on U.S. postage stamps, she was the subject of an opera, and she was awarded, posthumously, the Presidential Medal of Freedom by President Barack Obama in 2012. 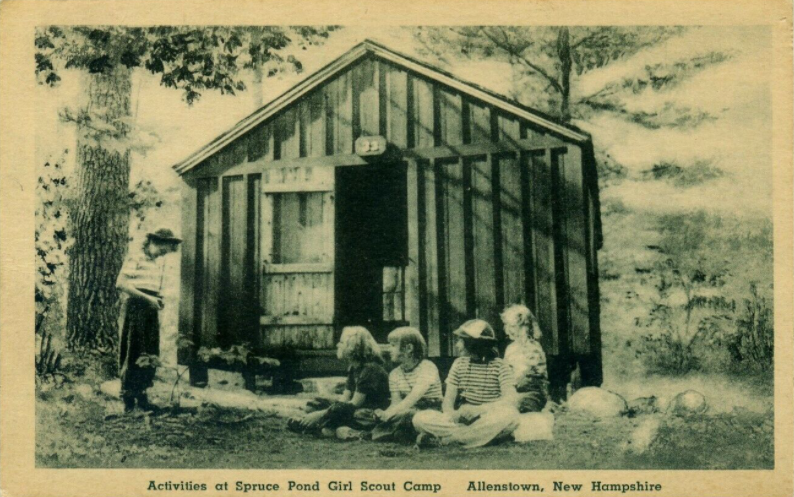 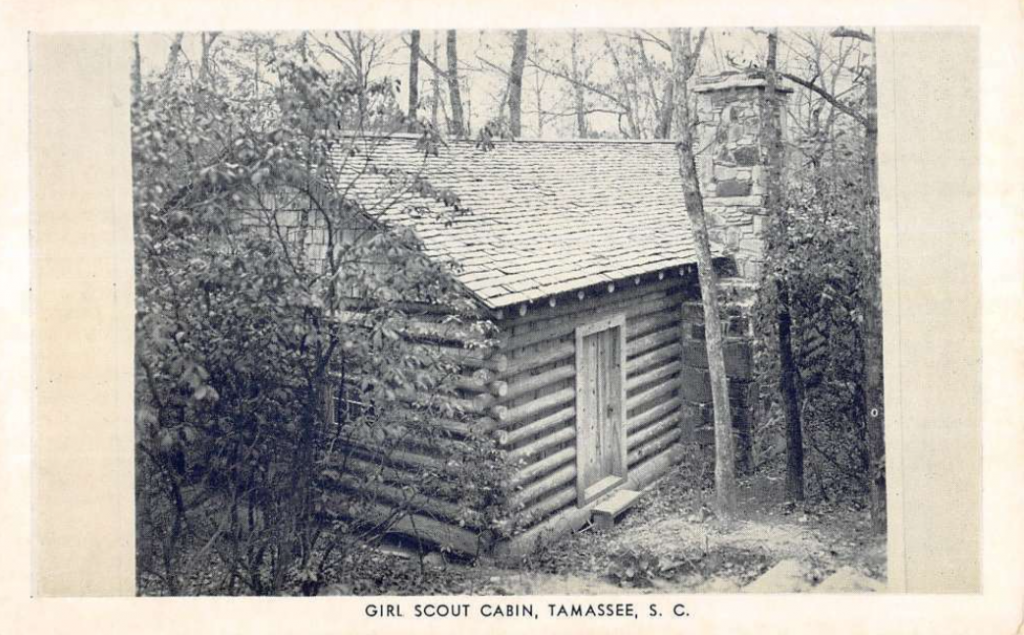 Today, Juliette Gordon Low is remembered and honored by generations of people whose lives have been touched by the Girl Scout movement.

I have been told for a long time – Wait, … how long have we been married? – that the Girl Scouts is more than cookies. My dear wife of 55 years was a girl scout in the 1950s and ‘60s and she says that girl scouts mean as much to her as the Boy Scouts mean to me.

In recent years, our country, the world, and perhaps the universe has changed. The extent to which society differs is visible through the lens of history, but there are some who would change that too. What may change in the future is invisible, even with a crystal ball. Like so much else, organizations based on gender seem to be falling by the wayside. I pass no judgement on those who choose to change the future, but oh my, I am having a difficult time with those who want to change the past.  Postcards of the Girl Scouts and Boy Scouts are highly collectible. If you collect scouting postcards many of these may be familiar to you, but not from an historic point of view. These are the cards you grew-up with.

The Staff of Postcard History offers this article for your enjoyment. It is a combined effort of many: our publisher, editor, webmaster and collectors/contributors far and wide. Please use the COMMENTS feature below to let us know how we're doing.
PrevPreviousWhere oh, Where, Has This Postcard Been?
NextShopping American StyleNext
3 Comments
Oldest
Newest Most Voted
Inline Feedbacks
View all comments
Bob Kozak

Mrs. Low’s nickname was the inspiration for the term “Daisies” being applied to the youngest girls in the Scouting movement. Her birthplace was honored in the Savannah Smiles cookie line which was discontinued a couple of years ago.

Nice summary of the Juliette Low and her Girl Scouts. There is a very nice series of postcards published by GSUSA that spans from 1922 to 1973 (133 in total). They are designs that depicts camp scenes. Some are quite rare!

My story hinges on a Scouting experience in a perhaps unusual way. Too long to tell here, I will be printing it out soon I hope