a look at some more odd cards.

Since you have read Postcard History this year, you remember in January we began a series of articles devoted to odd postcards. Odd cards are unrelated to most of what we collect which makes them as unusual as fifth Sundays. This second episode is a worthy continuation.

Postcard collectors who have been at it for a few years will admit to having cards which qualify as space-wasters. As we did in January, here are three such cards – two from my collection and one from a friend’s – I’ll let you guess who. They represent places on earth that are hemispheres apart, as well as unrelated by date or topic. Cards whose histories are short but well worth telling.

Come along as we dig some unusual trivia from history’s dustbin.
* * *
Twin Cities . . . 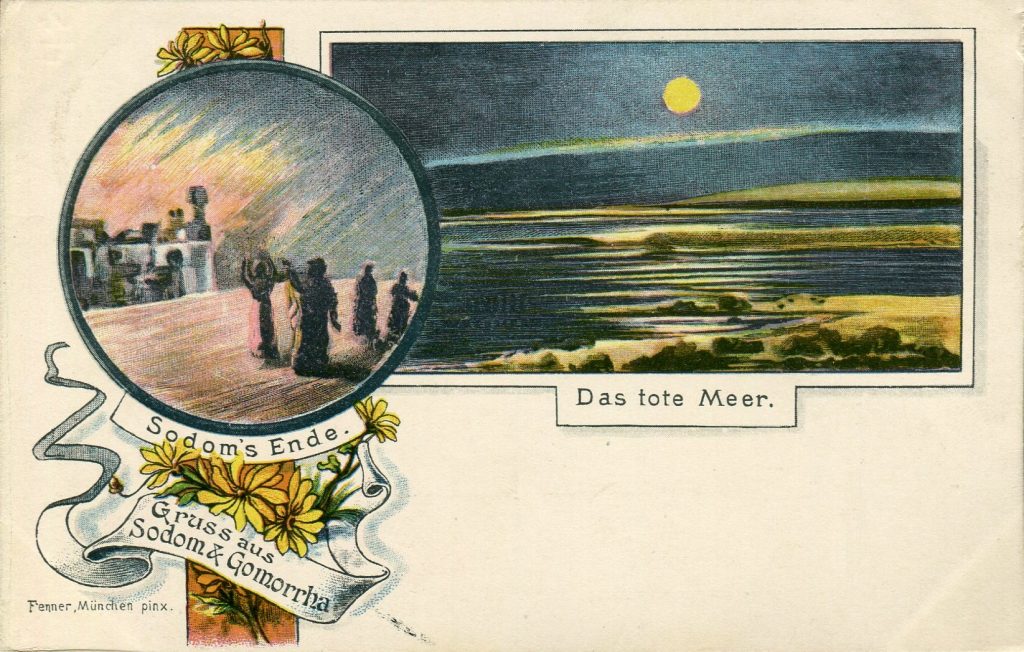 The idea of twinning cities goes back to biblical times. Let’s be certain from the onset that we are talking about twin-cities, not sister-cities. The criterion for twin-cities is that each is founded in relative proximity to the other. Over a lengthy period of time, they grow into each other and the neutral zone between is dissolved by residential or economic development.

The most famous European twin-city is Budapest. Buda and Pest, founded on opposite sides of the Danube River, were twinned in 1873 by the Chain Bridge.  In America, some of the famous twin-cities (that in most cases share an airport) are Minneapolis and St. Paul in Minnesota, Dallas and Fort Worth in Texas, and Raleigh and Durham in North Carolina. And, how could we ever forget Lexington and Concord.

Now I’m not making a claim or stating a fact, but certainly the first pair of twin-cities that come to mind are two biblical towns which figure prominently in the story of Lot and his wife (she is never named). They are Sodom and Gomorrah. [Do you have any idea how deep I had to dig to find a postcard of these places?]

This delightful “Gruss Aus” greeting is an undivided back printed in Germany. The larger of the two images is a moonlighted view of “Das tote Meer” (The Dead Sea). The tranquility is obvious and serene. The second image is an artist’s conception of the destruction of Sodom. 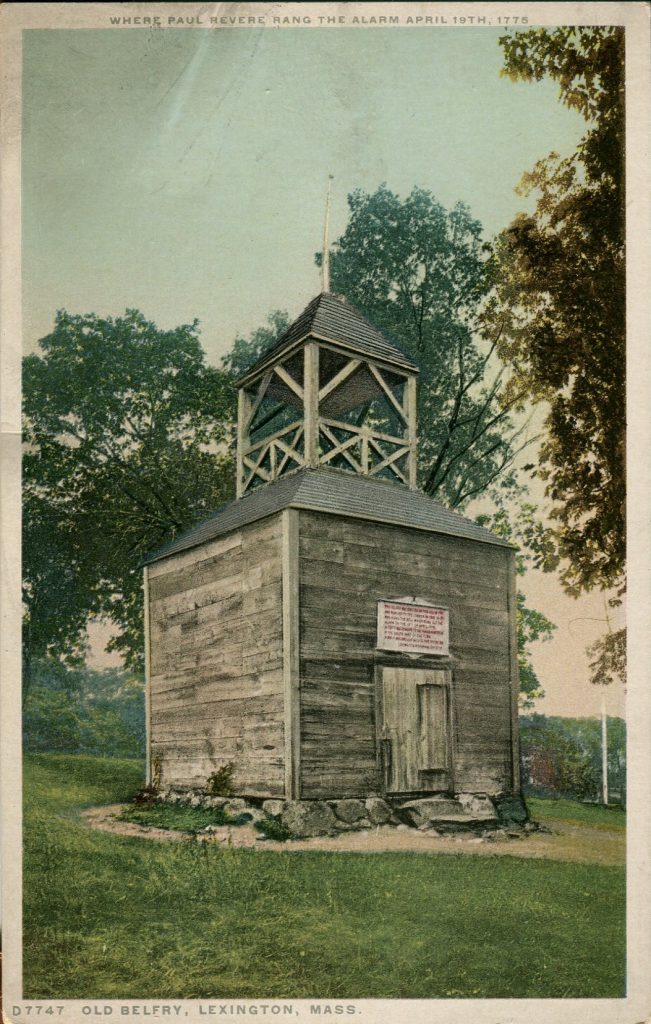 Built on its present site in 1762, the Belfry served many purposes for the citizens of Lexington. From here the bell summoned people to worship, warned them of danger, tolled on their deaths, and on the 18th of April in ’75 (1775, that is) hardly was there a man who did not hear the bell sounding the alarm that caused Paul Revere to take a mid-night ride to Concord.

The first structure, erected on Belfry Hill, served the community until 1768 when a decision was made to move it to a place at the village center known at the Battle Green.

The tower was completely destroyed and the bell damaged in 1909. There is controversy as to how the damage occurred. One account states that heavy storms cause the damage; other accounts mention fire.

An exact reproduction (seen on this postcard) was built in 1910 on the Belfry’s original site at the corner of Clarke Street and Massachusetts Avenue. 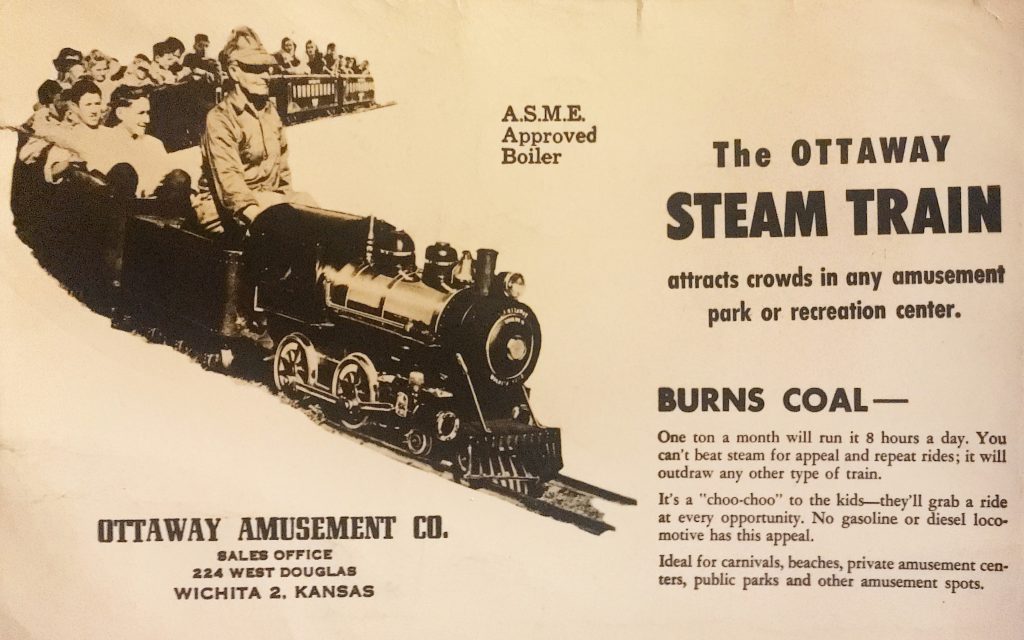 East Coast, mid-land, West Coast, all around the country, where you lay your head at night is home. Home is where the heart is, and let’s face it, it may be where you were born, went to school, had your first kiss, got your education, married your high school sweetheart, and raised a family. And while you were doing all the above, earning a living.

Wichita, Kansas, is likely to be one of the best places in the country to earn a living. Across the wide-open plains of south-central Kansas there are lots of wheat and cornfields for farmers, but there are lots of big companies. You get a choice of pharmaceuticals, aviation, automotive, petroleum production, heavy equipment, finance, government, and health care.

But . . . if you didn’t or never had the opportunity to work at the Ottaway Amusement Company, I bet you missed out on a good time while you earned your daily bread.

The Ottaway Steam Train that burns Coal postcard has been loaned to Postcard History Online Magazine for our Fifth Sunday feature by Hal Ottaway. Hal is the grandson of Lester A. Ottaway. Hal recently wrote for Postcard History, “Yes indeed, that is my Grandfather, Lester A. Ottaway, my dad’s father. My grandfather and his two sons, my dad, Harold and his brother, Herbert, built these steam trains for amusement parks after World War II when metals and supplies were starting to be available again.

“They also built Joyland Park, just east of downtown Wichita. It was soon sold because its land value increased, but they built another and much larger Joyland Hillside Park that opened for business in June 1949. Their steam trains were at both parks.

“They had their hands full competing with the larger amusement parks and later sold their train business to Harold Chance.

“Chance, who worked for them and knew all about the trains, went on to build Chance Rides Industries, (https://www.chancerides.com). Today, they are the world’s largest amusement ride manufacturer, they make the big Ferris wheels and ship them all over the world, and they are right here in Wichita. It all started with the Ottaway Steam Train.”

Hope you enjoyed this foray into postcard trivia, I’ll be back in August on the next Fifth Sunday.

Ray Hahn is a retired educator, but he has never stopped teaching. His decades of researching, writing and editing a newsletter for the South Jersey Postcard Club has been a world-class education in trivia. In addition to postcard collecting, Ray’s other interests include history, genealogy, and touring the world with his wife Marie. Ray often advises his readers to "Join me as we explore the world one postcard at a time." Ray and Marie live in New Jersey.
PrevPreviousCatching up with Postcard History PART TWO
NextThe Big FiveNext
4 Comments
Oldest
Newest Most Voted
Inline Feedbacks
View all comments
Bob Kozak

Of the cards featured, I’d most want to own the one depicting the Ottaway Steam Train.

Fun seeing but not owning, at least for me. I’m limiting myself to pre-1915 holiday cards, “linen” roadside stuff, and “real photo” railroad related, as well as portraits of pre-1930s kids.

I have one “mourning card” complete with black borders. It is about the death of steam trains.
Also a few other odd balls I just had to have.

What a delight these stories have been to my life.