In the 1950s the symphony, orchestra, and philharmonic enthusiasts in America adopted the term “The Big Five” to symbolize the ranking of the most prestigious music ensembles in the country. No similar list existed in Europe. The Europeans are far less ego-centric than Americans, consequently the “rest of the world” was ranked in a list of the “Top Twenty.” The Top Twenty list was republished by Gramophone Magazine in 2012 and it included seven American orchestras.

Oddly, the character of the halls in which these orchestras performed, including ease of access, seating and seating capacity, décor, and acoustical excellence never entered the criteria.

Concert halls were once the pride of every big city. East to West, North to South, generally speaking, community activities centered in three primary sites, at city halls, churches, and auditoriums where music could be heard.

The world’s first purpose-built (circa 1748) concert facility was the Holywell Music Room, in Oxford, England. You may have heard of the composer who used the venue most frequently, George Frideric Handel. 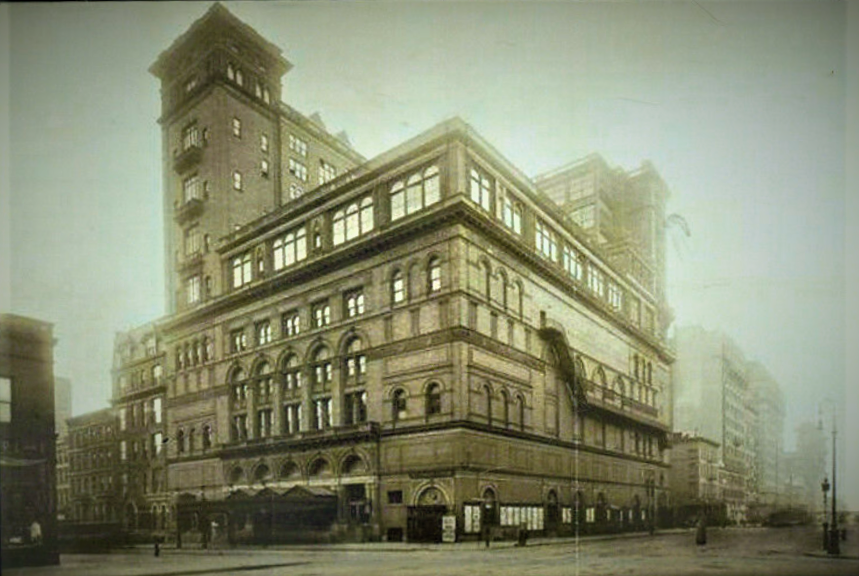 In America, when William Tuthill laid the cornerstone of the first concert hall in North America, Andrew Carnegie proclaimed that “it is probable that this hall will intertwine itself with the history of our country.” This was true from the start when it opened on May 5, 1891, with a spectacular concert that featured famed Russian composer Pyotr Ilych Tchaikovsky. Tuthill created a venue that is still in business and has some of the hottest tickets in the entertainment market.

Founded in 1842, the orchestra is one of the oldest musical institutions in the United States and the oldest of the “Big Five” orchestras. Its first concert took place on December 7, 1842 in the Apollo Rooms on lower Broadway before an audience of 600. The concert opened with Beethoven’s Symphony No. 5.

Only four years later the Philharmonic’s concert venue moved to the Castle Garden at the lower tip of Manhattan. In residence there for forty-five years, the orchestra played a regular schedule of concerts featuring most of the world’s famous musicians. The list of musical achievements included an 1865 concert in memory of Abraham Lincoln.

Their next move was on May 5, 1891, when Music Director Walter Damrosch and Russian composer Piotr Ilyich Tchaikovsky conducted the inaugural concert in the city’s newest music hall.  Carnegie Hall would remain the orchestra’s home until 1962. 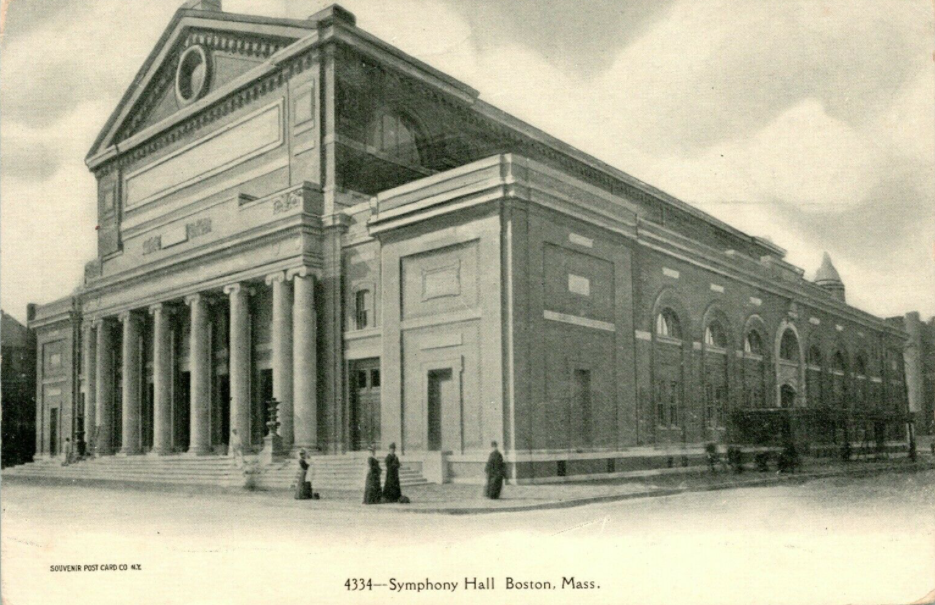 The architectural firm of McKim, Mead, and White was selected to construct Boston’s Symphony Hall on Massachusetts Avenue in Boston by the end of 1900. They finished over two months early and the first Boston Symphony concert was performed on October 15. The BSO continues to make the hall its home. It has room for an audience of 2,625 people.

As with many of McKim, Mead, and White’s projects Symphony Hall has a sterling reputation for quality and continues to hold its reputation for having the best acoustical properties, among the top three concert halls in the world and is considered the finest in the United States. The word quality is principal especially with regard to the leather seats, the ones in use today (98%) are the same ones that were installed during construction 122 years ago.

The hall also serves as home to the Boston Pops Orchestra and the concert venue for the Handel + Haydn Society.

Nearly two decades before other symphonic organizations on the East Coast, Boston gave its blessing when Henry Lee Higginson announced his plan and enacted his scheme of creating an orchestra for the musicians of Boston. For the first three decades of operation Boston had a closer association with European music roots than any other American ensemble. The conductors and musical premieres were overwhelmingly European.

Some level of criticism reached the organizational leaders but most complaints fell on deaf ears, for the audience, early on, let it be known that they were pleased. Then came 1924 when Serge Koussevitzky became music director.

Koussevitzky had an electric personality. He championed contemporary music, he was a successful composer, and a competent double-bass player. There are several stories of SK joining the bass section in performances led by guest conductors.

Koussevitzky inaugurated radio concerts and summer performances at Tanglewood in Lenox in the Berkshire mountains of western Massachusetts. Everything improved under his leadership. Millions of listeners tuned their radios to Boston radio WGBH; full year employment happened, salaries improved, performance opportunities increased, and in spite of the $2 ticket prices, ticket sales skyrocketed.

Additionally, there were the commissions for contemporary music. Koussevitzky’s encouragement of prominent composers of his time led to many new pieces, including the Symphony No. 4 of Sergei Prokofiev, George Gershwin’s Second Rhapsody and Stravinsky’s Symphony of Psalms. The BSO also premiered Bela Bartock’s Concerto for Orchestra.

Koussevitzky left the BSO podium in 1949. Quickly followed by such conducting luminaries as Charles Munch, Eric Leinsdorf, William Steinberg, and Seiji Ozawa. After interviews with Colin Davis, Leonard Bernstein, Michael Tilson-Thomas and others, the board of trustees chose Ozawa in 1973; he held the post until 2002, the longest tenure of any Boston Symphony conductor.

As we reach this point, the story of “The Five” and the halls they work in will be continued. On Thursday you will be able to read about the Chicago Symphony and Orchestra Hall, the Philadelphians and the Academy of Music, and the Clevelanders and Severance Hall.

Dr. Dancer is joining Postcard History as a pictorial tour guide. Nate has been collecting postcards for four decades and has amassed a vast collection and stores of knowledge on his favorite topic - public architecture. He recently became a pensioner. He and his wife live in north Scotland with their precious cat named Sage.
PrevPreviousA Fifth Sunday Special – a look at some more odd cards.
NextPostcard History Quiz AnswersNext
3 Comments
Oldest
Newest Most Voted
Inline Feedbacks
View all comments
Bob Kozak

I’m reminded of the joke in which a tourist asks a taxi driver, “How do you get to Carnegie Hall?” The cabbie’s response: “Practice, man, practice!”

Thanks! I needed a smile in the worst sort of way.

The 33 RPM record was introduced by Columbia Records in 1948. Its long playing format was ideal for classical music. The Big 5 symphony orchestras recorded extensively during the 1950’s and 1960’s. for Columbia, RCA Victor and other labels increasing their fame and popularity.