The old and frequently misquoted line, “A man’s house is his castle,” is much older than many of us imagine. It comes from an English court case decided in 1604. The jurist Sir Edward Coke (pronounced Cook) wrote his decision in a case that came to be known as the Semayne Case, that there were limits on how a Sheriff could enter a person’s house, regardless of rank, status, or title.

The new law became applicable in the Reign of King James IV and Judge Coke made it clear that the “prime directive” for Sheriffs to follow was that a house owner had the absolute right to defend himself against thieves and murderers, and also had the right to assemble his neighbors to defend his property against violence. All in perpetuity.

Since English Common Law was the foundation of American jurisprudence, similar laws were enacted in the United States. However, with full consideration to the country and its citizens the literal interpretation ran amok.

The postcards below illustrate how far three men went to make their homes castles. Not surprisingly there are at least six different postcards of each home.

Joe Jefferson at his “Crow’s Nest” at Buzzards Bay, Massachusetts 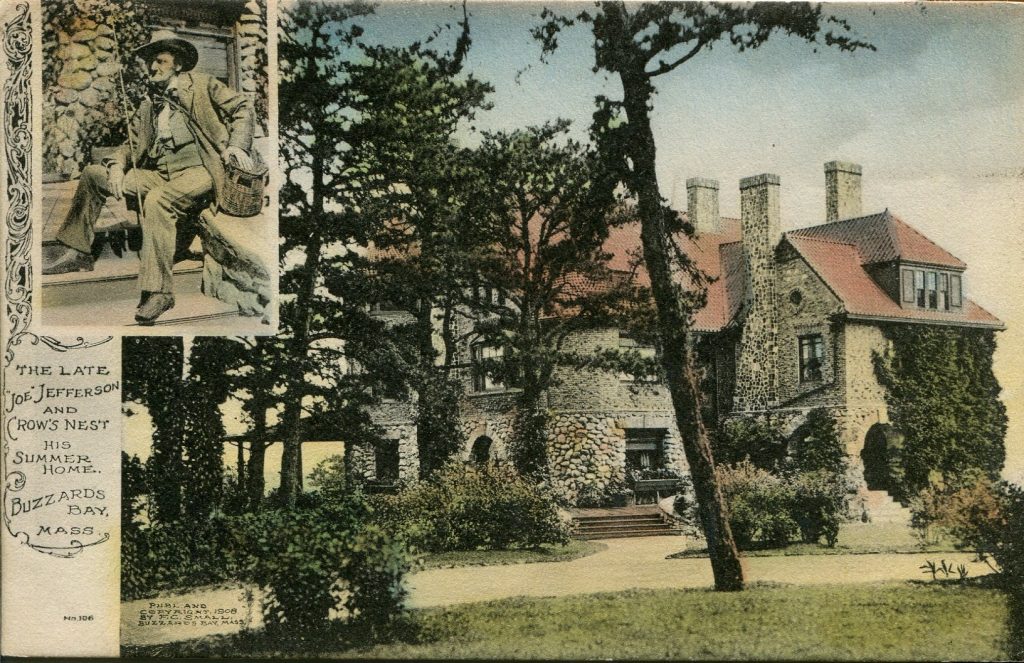 Joseph Jefferson III or Joe Jefferson, born 1829 was an actor and the third member of his family to be so-named. The family was among the famous. Joe III made his stage debut as a child by telling his father’s old jokes. For the rest of his 76 years he acted in stage and silent-film roles. Jefferson gained international fame for his adaptation and portrayal of Rip Van Winkle on stage and film.

Jefferson was known to loathe city life and thus when the opportunity came in 1890, he built a Queen Anne style, all stone seasonal cottage at Buzzard’s Bay, Massachusetts.

Built to many of Jefferson’s own ideas, the special features of the property included broad piazzas and light and airy apartments. The purchase was estimated to be $30,000. The house soon became a center for entertaining his family and friends – among whom were President and Mrs. Cleveland.

The house contained many relics, paintings and decorative tiles that were collected from places abroad where he had performed.

In newspapers across the country, the afternoon editions on April 1, 1893, carried the same headline: CROW’S NEST DESTROYED; JOE JEFFERSON’S BEAUTIFUL HOME GONE UP IN FLAME. GASOLINE LEAKED OUT IN THE CELLAR AND THE FURNACE FIRE EXPLODED IT.

The fire totally destroyed the beautiful summer residence, and sadly, the family cook, Helen McGrath, perished in the ruins.

The Wonder House at Bartow, Florida

Conrad Schuck was many things. Some say he was a poet; others claim he was a philosopher. The fact that he was a dreamer is probably true, but for very peculiar reasons.

Schuck was a Pittsburgh building contractor and stone quarry dealer in the years after the first world war. Family folklore tells the story that a doctor told Conrad, that his health was so fragile that he would soon die if he didn’t move to a much warmer environment. He decided to take his wife and nine children to Bartow, Florida. He then chose to use his building skills and his wealth to build a dream house.

Dream house indeed. After the acquisition of the land in 1926, Schuck proceeded to construction without blueprints. The blueprints that now exist were drafted in 1937.

From street level, the Wonder House seems to be a two story residential structure, but it is indeed four levels; there are two stories underground. It is concrete reinforced with steel and inlaid with glass and mosaics. The house featured many time saving devices like delayed light switches, a laundry chute and air conditioning.

Conrad Schuck never lived in the Wonder House, but it was a popular tourist destination from the 1930s to the ‘60s. Schuck was a collector of curiosities and oddities. Visitors to the Wonder House frequently found snakes in jars being displayed alongside, taxidermy exhibits of unique Florida critters and birds.

The strangest wonder about the Wonder House is that Conrad’s move to a warmer climate must have worked. He lived well into the 1960s. 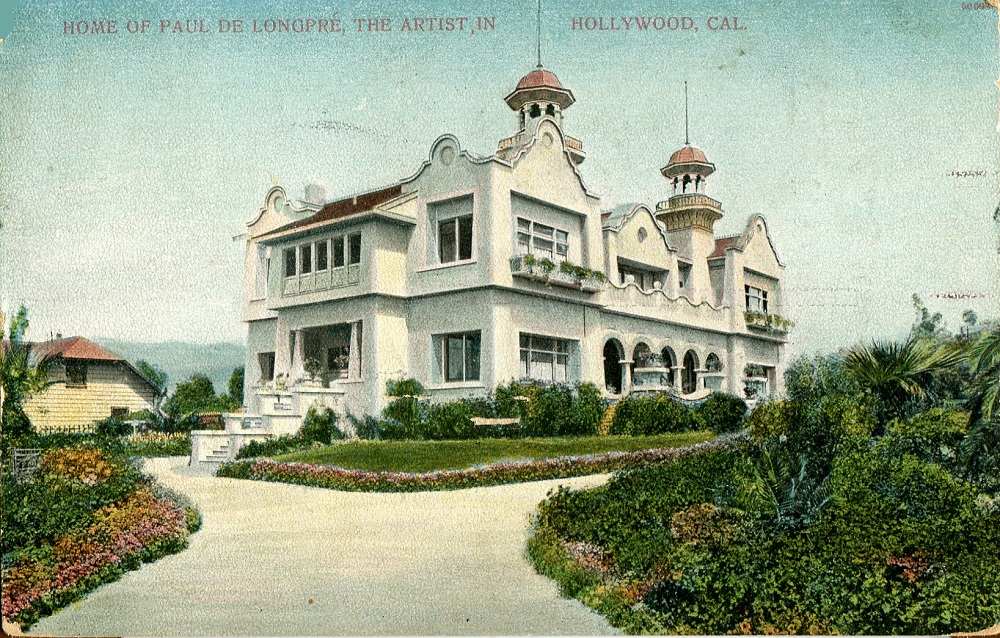 Postcard History is aware of at least 36 postcards of this house and its interior.

Paul de Longpré was a painter who worked most of his life in California. A series of postcards show de Longpré in his studio surrounded by his paintings and antiques. 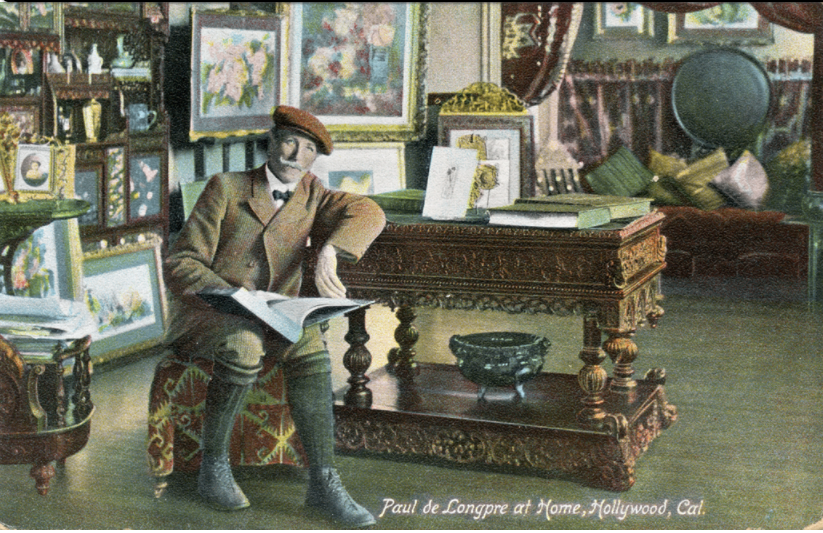 From around 1906, dozens of postcards appeared, usually as greetings that show de Longpré’s artistry. Working primarily in watercolors, he painted flowers, almost exclusively. He literally wed his knowledge of botany and his artistic skills in art. The proof being that in the 1900s de Longpré found inspiration in the 4,000 rose bushes he planted on his Hollywood estate. The finest of his paintings include Double Peach Blossoms and White Fringed Poppies – both widely known through print reproductions, including postcards.

He was a self-taught artist, born in France who started his career in Paris painting fans. His first exhibit occurred at age 21. Wealth came quickly for de Longpré, but when a Paris bank failed in 1890, he left France for New York. Within the same decade he moved his family to Los Angeles where he was given a three-acre homesite on Cahuenga Boulevard in exchange for three of his paintings.

Just two years later the Canadian architect Louis Bourgeois designed a new residence for de Longpré that included a gallery and a studio.

Paul de Longpré died in that home in 1911, after which his family returned to France. The rose gardens and the house were demolished in 1924 and 1927, respectively. Today, the only memory of de Longpré is a street and a small park that are named for him.

The Staff of Postcard History offers this article for your enjoyment. It is a combined effort of many: our publisher, editor, webmaster and collectors/contributors far and wide. Please use the COMMENTS feature below to let us know how we're doing.
PrevPreviousTea and the Taj Mahal
NextWindmillsNext
1 Comment
Oldest
Newest Most Voted
Inline Feedbacks
View all comments
Bob Kozak

Sounds as if I’d enjoy touring the Wonder House.