Tea and the Taj Mahal

The words Taj Mahal when used together mean The Exalted One of the Palace. Nevertheless, the word “taj” is nearly impossible to translate to English. It can be a given-name for both male and female children, it is in the names of several buildings on at least four continents, and it is a hat worn by dervishes. It is a part of many names: cities, sports teams, airports, and countless cultural festivals. It is a television network and it figures in titling novels, short stories, and poems. It is in names for hotels, casinos and tropical resorts, as well as a dozen import-export firms worldwide. Mostly, however, it is part of the name for a famous mausoleum in north-central India.

The most common recognition of the words Taj Mahal is of the all-white marble mausoleum, along the banks of the Yamuna River in the Indian city of Agra. Designed in 1632 to accommodate the tomb of Mumtaz Mahal, the favorite wife of the Mughal Emperor, Shah Jahan, the tomb is the centerpiece of a 42-acre compound. Tourists arrive by the millions. Also within the complex are a mosque and a guest house. The entire area is set inside formal gardens surrounded on three sides by a crenellated wall. 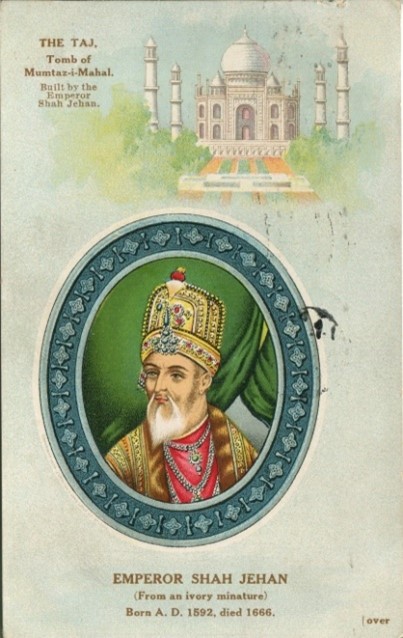 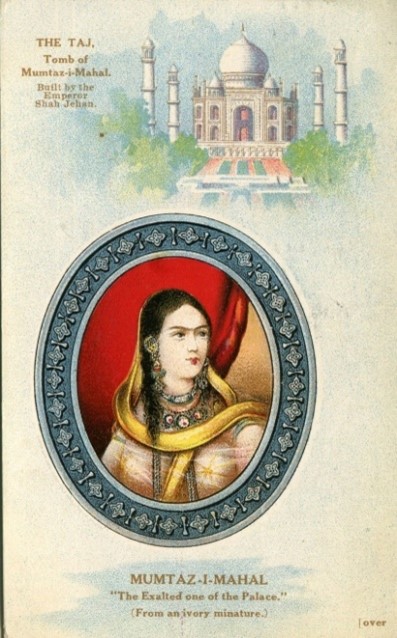 For postcard collectors, it is unsure to what degree the Taj Mahal influences our collecting habits unless you collect “tea” postcards. There are approximately 113 entities, in 21 nations, which amass income based on the manufacture, distribution or growing of tea. Companies such as Lipton, Tetley and Twinings (all British) and Bigelow (American) account for nearly 96% of all tea sales worldwide. United States’ sales rank fourth in the world at $3.7 trillion annually, behind China at $17 trillion, India at $11 trillion, and Japan at $4.1 trillion.

Tea postcards are not abundant, but with some effort sets published by Lipton and other advertisers can be found. By 1908 successful tea markets existed in over 40 countries. I have two cards postmarked shortly after the tea bag was invented in 1903. The two cards shown above, postmarked 1909 and 1910, were mailed to customers in Kansas and Tennessee by sellers of Indian Tea products, i.e. full leaves, tinctures, and blends.

One interesting topic discussed within the tea culture is, “What is meant by real tea?”

Tea is derived from a particular plant (Camellia sinensis) and includes only four varieties: green, black, white, and oolong. All other beverages derived from mixing other plant-parts are known as infusions.

In America a common mistake is made when tea-drinkers say, “My favorite tea is Orange Pekoe.” There is no such thing as orange pekoe tea! “Orange Pekoe,” “fannings” and “dust” are words used to describe the quality and condition of tea leaves. As a clever advertising trick, teabag manufactures have made tea drinkers think they are getting some special blend of tea; when in reality Orange Pekoe means only that the very best condition tea leaves are used.

Do you know that tea is never harvested using any kind of machinery or metal tools? It’s true! The only tools permitted on tea plantations are fingernails and fingertips. Metal is very cruel to tea. It bruises the leaves. The jargon of the tea world can be somewhat confusing because “bruising” may sound as if it is a bad thing, but in reality bruising is good. Bruising is the part of the process that causes the cell walls of a leaf to breakdown. The breaking of the cell wall creates the flavor and aroma to emanate from the tea. It simply should not happen prematurely.

Once the tea leaves have been bruised, the manufacturer sets them aside for oxidation or fermentation. The leaves stay in a climate-controlled environment until they reach the desired level of oxidation, which varies depending on the character of the tea. Black tea is completely oxidized, while green tea undergoes very little oxidation; other varieties, such as oolong, get a moderate amount. When the tea master determines that oxidation is complete, the tea is heated to the specific temperature at which the enzymes that cause it deactivate.

It is then time for packaging, shipping and sales. Why not put the kettle on and enjoy a cup of tea?

Call me, I’ll be right over. 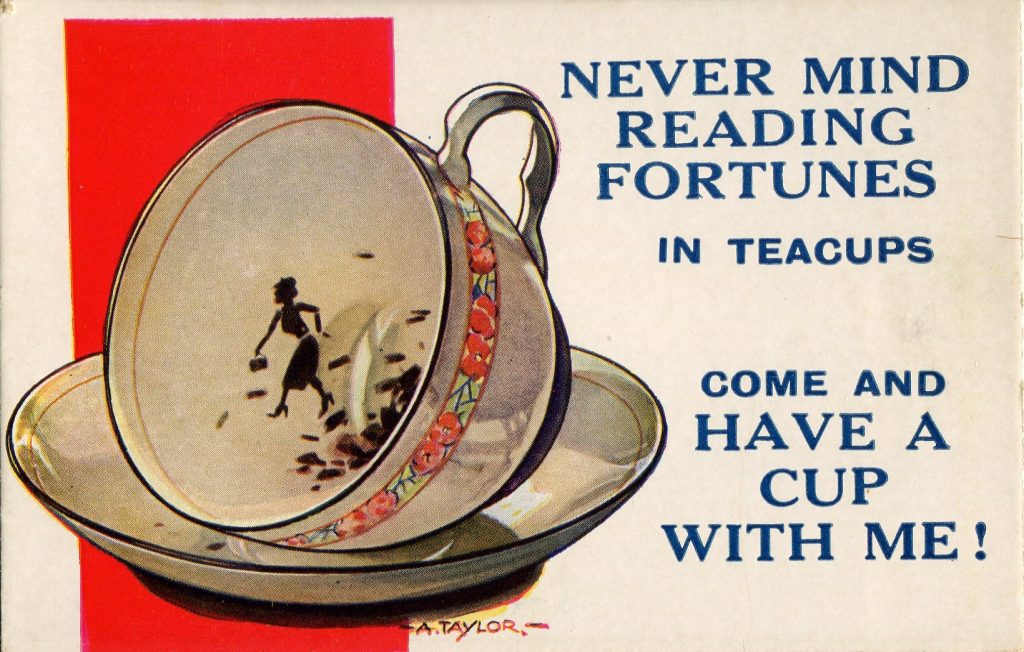 Ellie McCrackin is a pen-name used by one of America's foremost archivists. Preferring to remain in the background, Ellie ghost writes for some of the leading world historians. She loves postcards and loves to write about the stories they tell.
PrevPreviousAlpine Postkarten
NextLuxury American HomesNext
4 Comments
Oldest
Newest Most Voted
Inline Feedbacks
View all comments
Graham

I am based in Karachi, Pakistan. Had inherited these postcards from my late father. Had no idea about its historical background and the associated “story”. Thoroughly enjoyed reading the article. Trying to figure out how can I print it and keep it with the cards for future reference. Keep it up please.

My dad tells me that his mother occasionally had her tea leaves read.

A tea drinker’s guide to the universe. Thank you Miss Ellie.