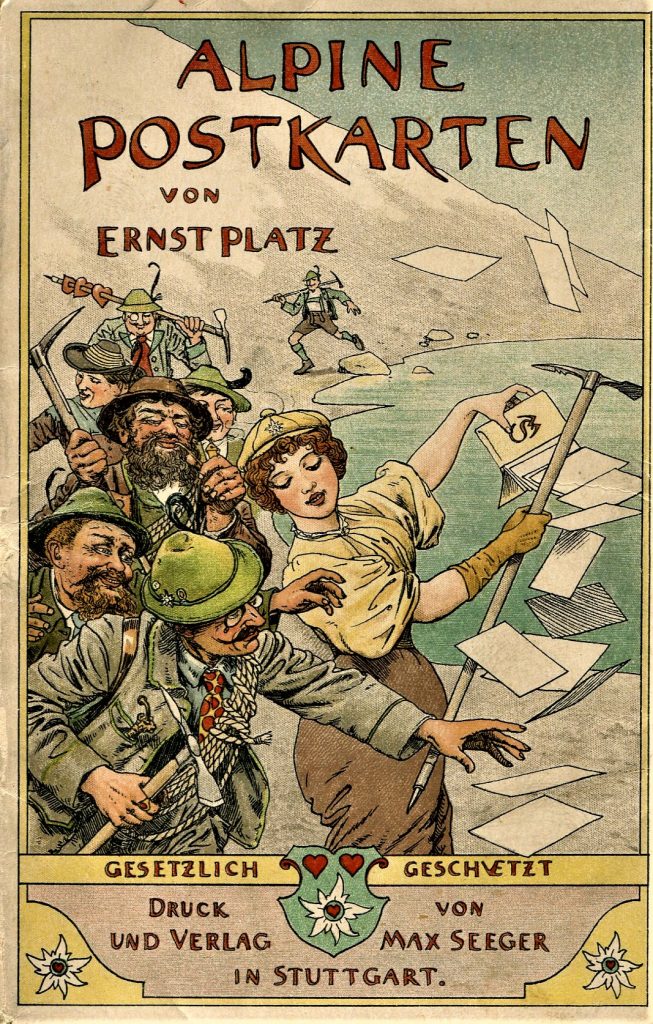 Ernst Platz was a German painter.

Born in 1867, at Karlsruhe, Germany, Platz was the son of an art teacher and chose mountaineering in the Alps as his reason d’art. His work is cherished around the world, but primarily in central Europe it is used as themed décor by experienced designers.

While a student at the Karlsruhe University of Technology between 1887 and 1890, Platz worked toward a degree in architecture but changed directions slightly when he moved to Munich and challenged himself as an artist and a mountain guide. His success as an artist was directed by the faculty at the Munich Academy of Arts where he honed his art as a plein air specialist. Prior to 1896 Platz successfully built his reputation through exhibits and book illustrating.

In 1898 Platz went to Africa to develop new skills in volcanology and glaciation. The paintings done in Africa (many of which were finished in Munich) are highly sought after by collectors in art markets around the world. For his efforts in attempting to learn about tropical mountains, he paid the price by contracting a malaria infection which precluded his doing anything strenuous for several years.

One of Platz’s most ambitious undertakings would have been a Himalayan expedition planned for 1914, but the world war intervened. The almost 50-year-old Platz volunteered but was forced to serve the war effort from behind the front.

When the war ended Platz found himself ailing and frail. He managed to continue painting on low-level mountain excursions and consequently never left Europe again. 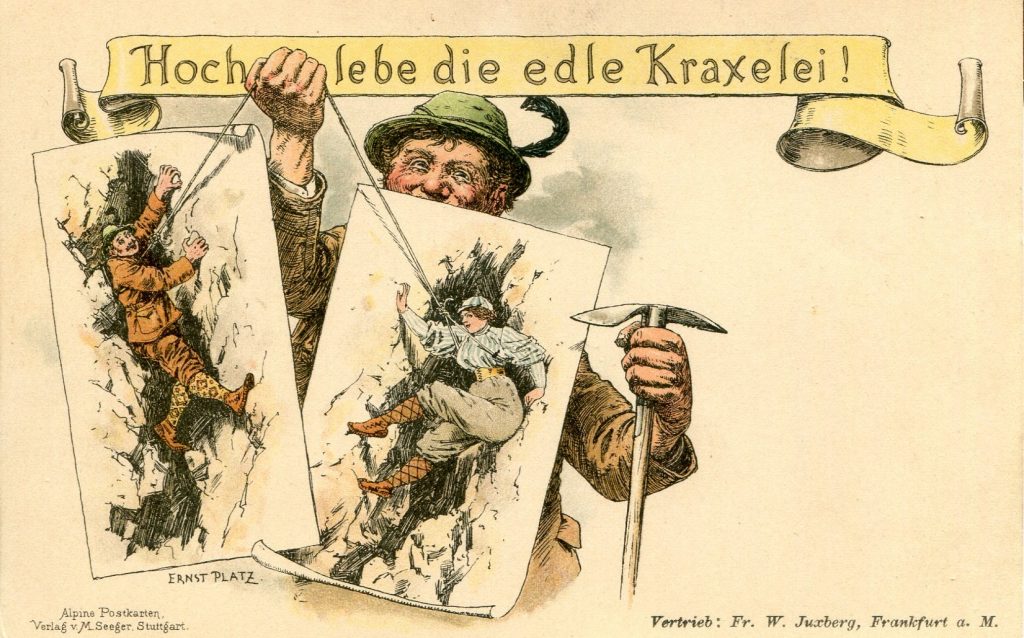 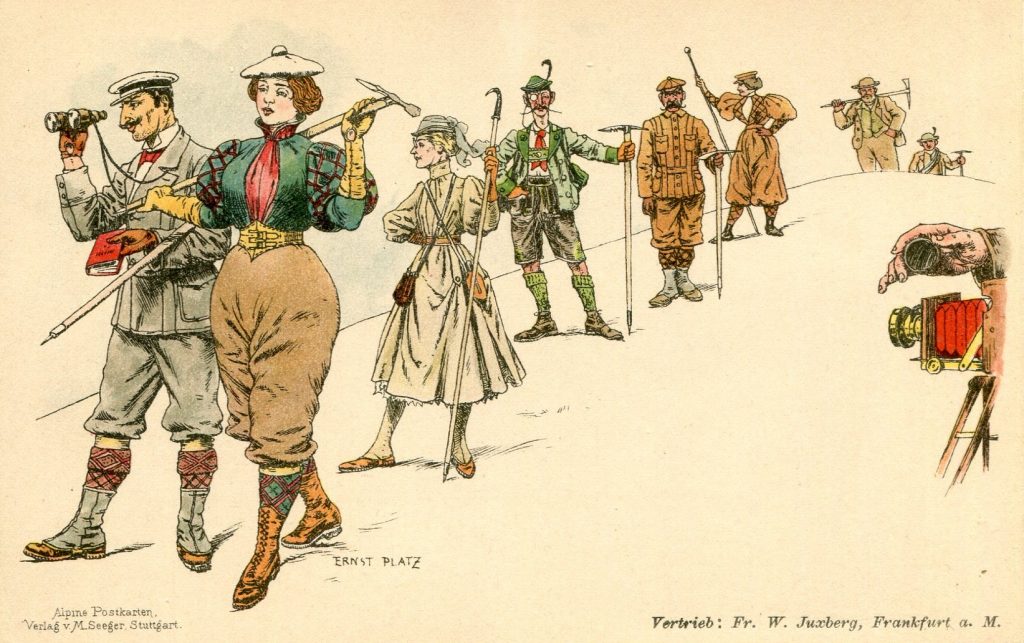 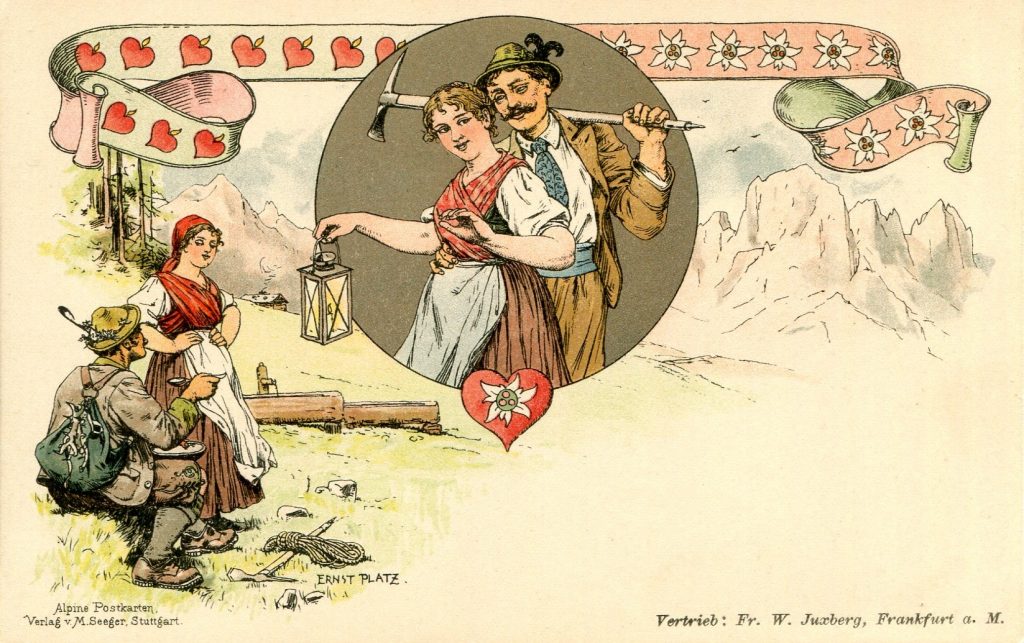 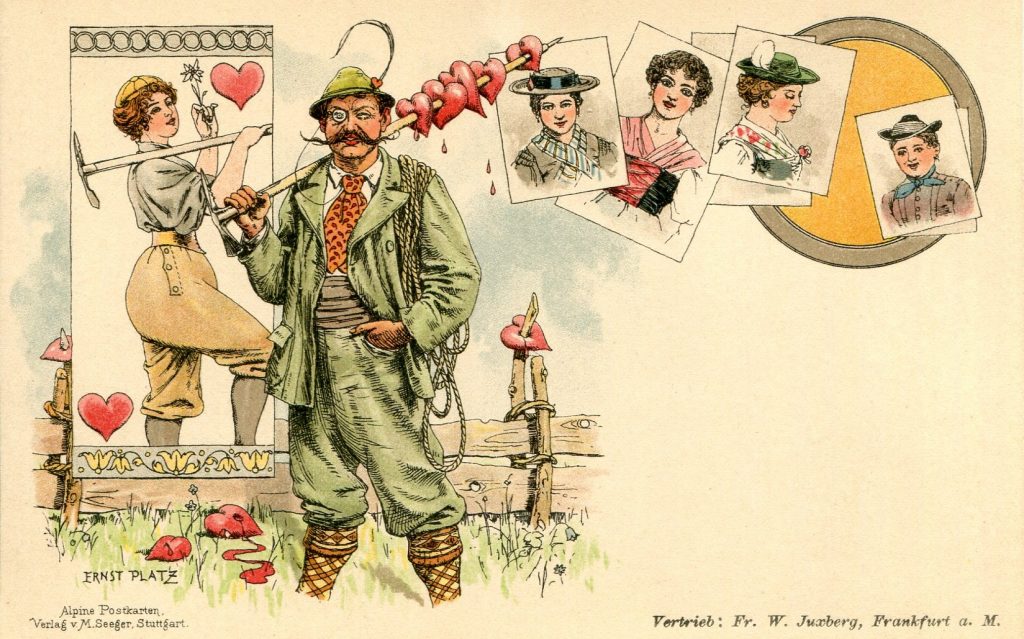 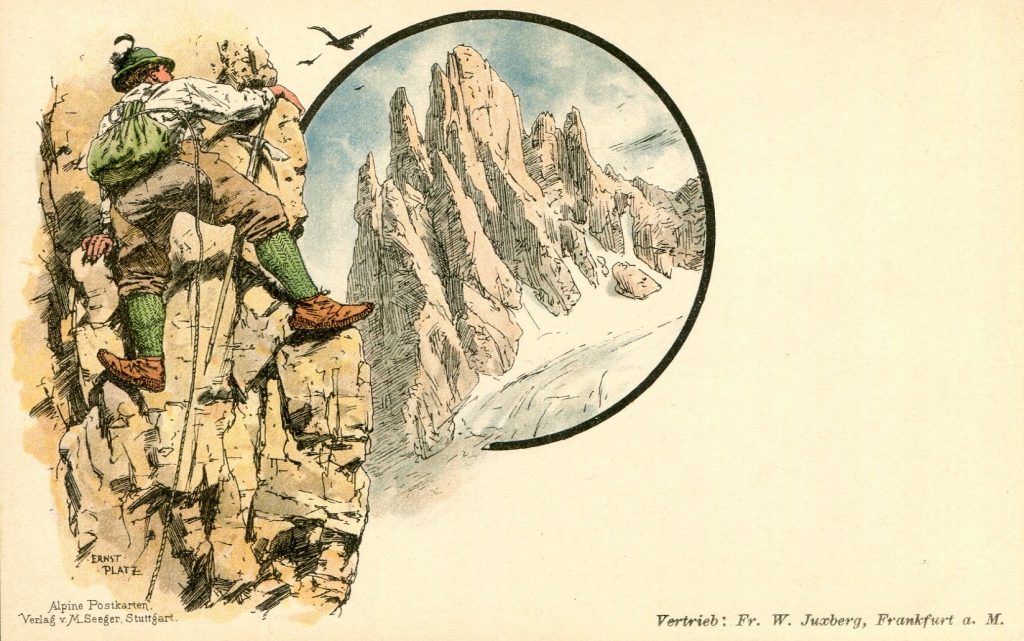 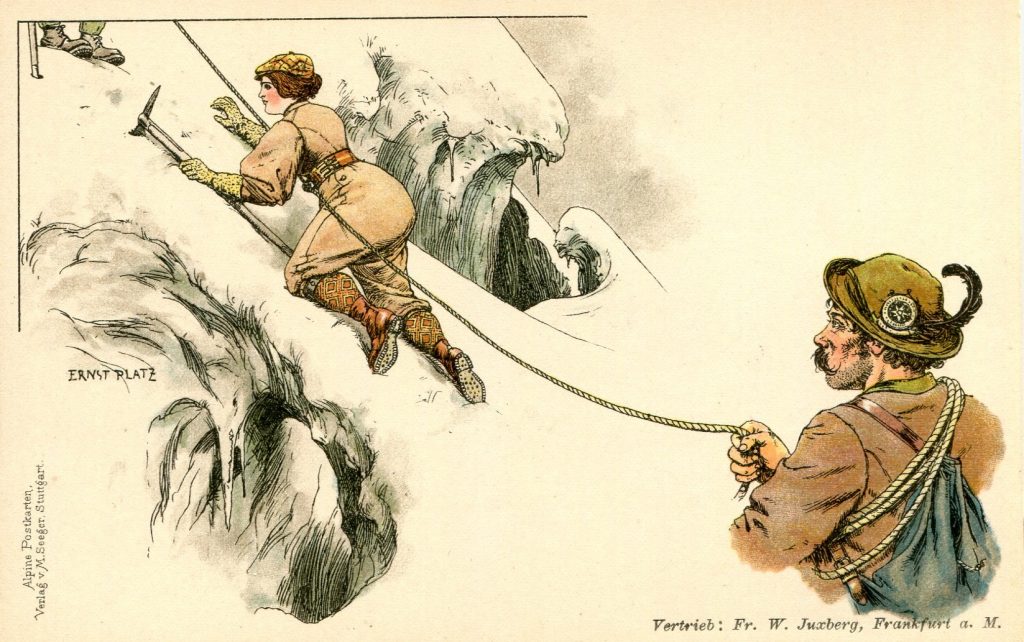 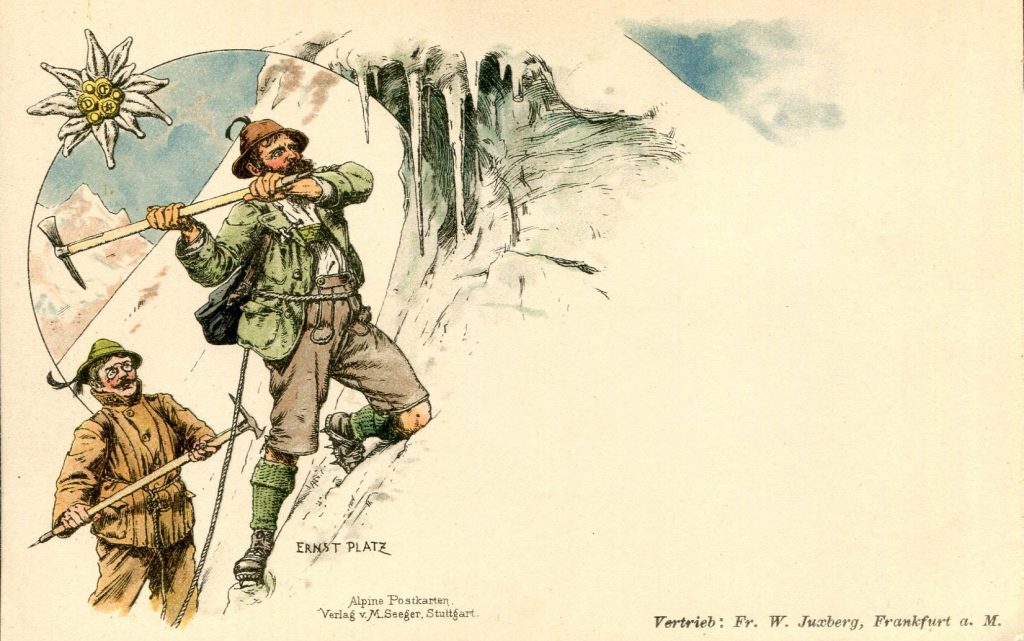 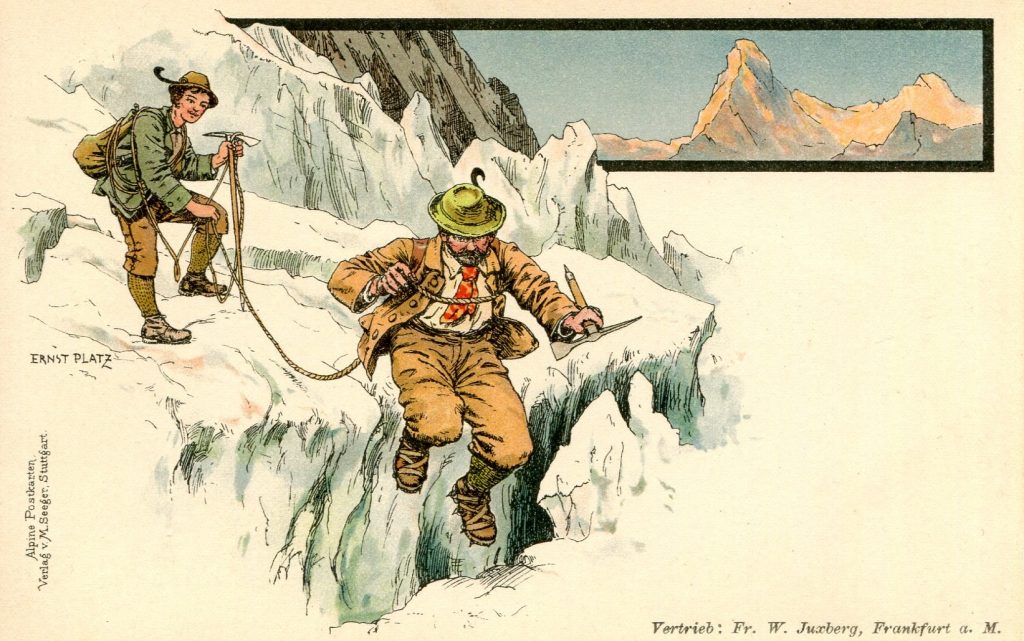 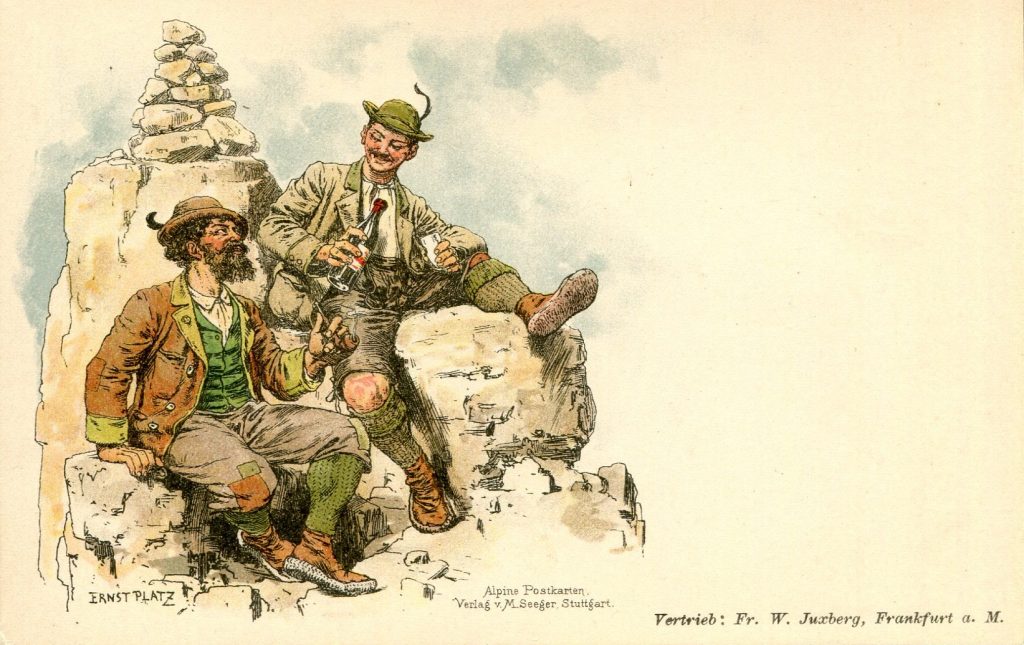 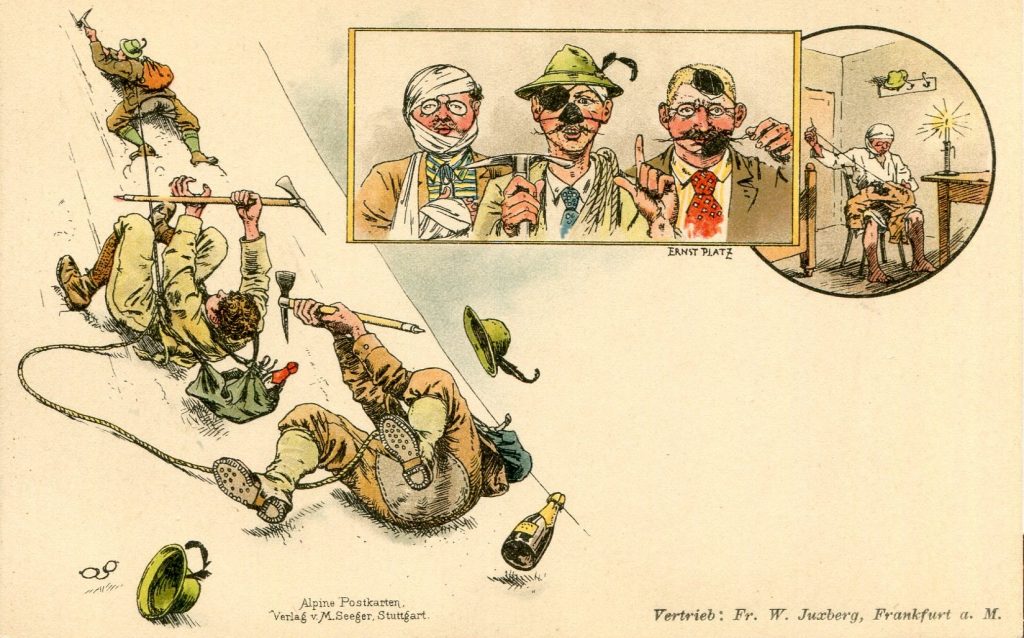 As an all Alpine collector, besides postcards I collect hats, climbing tools, and even rope samples. The cards with my contribution to Postcard History are the only postcards I have with Ernst Platz’s name on them. There are other cards that I “suspect” are his work, but my attempts to prove my suspicions have failed.

These ten cards and their wrapper are real treasures. They are the oldest set of cards in my collection. I suppose the set tells a story, but it will take someone with a more finely honed imagination to tell it.

Produced and printed in Stuttgart by Max Seeger, then distributed by F. W. Juxberg of Frankfurt, the set sold in a paper wrapper with art that included the Max Seeger family crest. Each is a delightfully detailed, artist-signed watercolor.

One card that may be the last in the series has a handwritten message which reads: Dear Eugene, Wishing for a happy new year and hoping for better time for 98. From [indecipherable] across the sea. Marburg, Dec. 17/97.

Owen Carrollson collects Alpine memorabilia; it makes him happy. He takes great glee in adding fact or fiction to his understanding of his great, great grandfather’s homeland. A man who came to America in the 1860s from his cabin in the Swiss Alps. He lived the rest of his life here in Minnesota as a dairy farmer and cheesemaster. Owen is happy to live in the house where his ancestor died in 1899.
PrevPreviousAmerican Fire Trucks
NextTea and the Taj MahalNext
4 Comments
Oldest
Newest Most Voted
Inline Feedbacks
View all comments
Graham

What a terrific set of cards! Enjoyed reading about Ernst Platz.

I noticed the camera at the right side of the top postcard in the right-hand column, and wondered if any of these scenes were based on photographs.

Swiss Publisher Guggenheim had cards with unsigned drawings that look very much like the ones in your article. Greetings from your ancestor’s homeland.