Early in the twentieth century Katharine Judson, an American librarian, historian, and amateur anthropologist gathered Native American legends. Her preservation of legend has helped our understanding of human behavior and development.

It was Judson who made it possible to know when the first fire in America happened. From the quote below you will learn that it was a long time ago.

The Cherokee tell us that in the beginning, there was no fire and the world was cold. Then the Thunders, who lived up in Galun’lati, sent their lightning and put fire into the bottom of a hollow sycamore tree which grew on an island. The animals knew it was there because they could see the smoke coming out at the top, but they could not get to it on account of the water, so they held a council to decide what to do. This was a long, long time ago.

The sense of community, since colonial times in America, has centered in three places: the church, the city hall and the local firehouse. It is uncertain if the Cherokee council of a long, long time ago decided to create a firefighting company, but the idea has spread around the world and today those whose serve as professionals or volunteers are some of our most important first responders.

Safe assumptions are that the first sanctioned fire company in America was formed at the Jamestown Colony in 1608 under the leadership of Captain James Smith. Some years later (1678) another organized group gathered in Boston with the express purpose of extinguishing destructive fires. In 1736, Benjamin Franklin headed a group called the Union Fire Company of Philadelphia. The history books are definitive; the United States did not have government-run fire departments before the Civil War. Then after, fire companies were often fraternal organizations of Civil War veterans as well as firefighters.

The “houses” around the country, prior to the 1860s, gathered their own tools and patterned their own path to extinguishing fire. Their equipment amounted to hand tools such as axes and buckets. Even though in 1743 an engine driven firetruck was built and in 1840 the first steam powered firetruck appeared, most fire engines were manipulated by men and horses.

Famous named companies that specialized in firefighting equipment are numerous – over 45 different corporations across the country manufacture highly customized engine and motor driven gear. (Currently one company is experimenting with an electric pumping vehicle.)

Early 21st century fire equipment is expensive. Prices range from $97 thousand to $825 thousand. For example, one Wisconsin based manufacturer has available a high-performance rear-mounted 75 foot aerial ladder truck capable of sustaining stability with a tip-load of 500 pounds. It is built on a steel chassis and is paneled with a choice of a stainless steel or aluminum body with over 400 options. 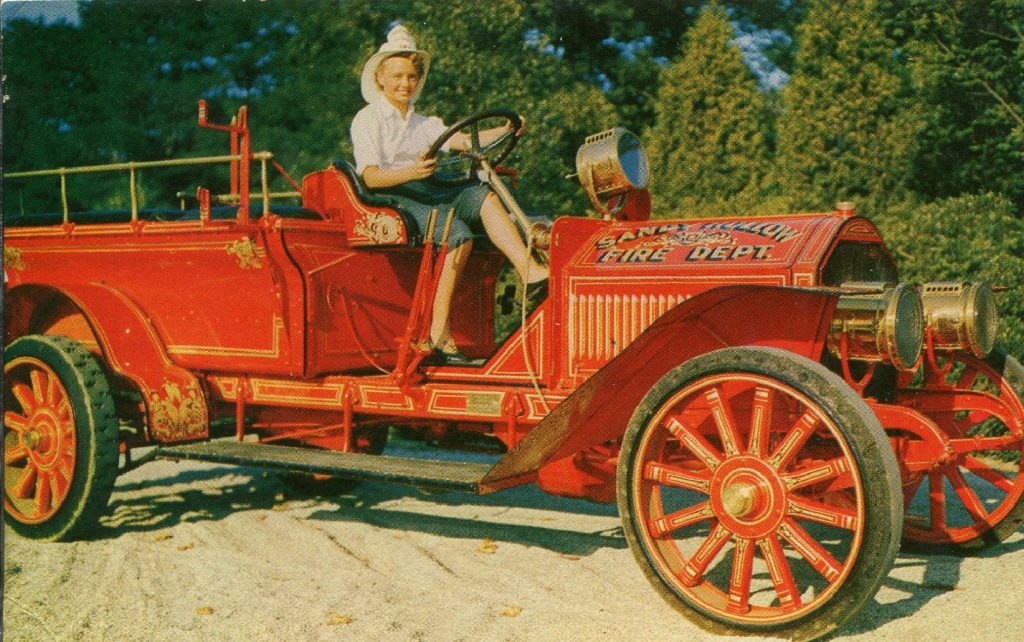 The history of Ford’s involvement with fire apparatus is sketchy. The company’s website is much more concerned with selling vehicles than educating those who are interested in its history.

It is fairly certain that the first Ford vehicles dedicated for use by fire departments date from the 1910s. In high-density populated areas, the fire-engine red “Chief’s Car” was a popular and well respected addition to a department’s equipment list. Community awareness would be engendered daily if the Chief had his own vehicle, ready for use at a moment’s notice. Chief’s cars were symbols of community pride. 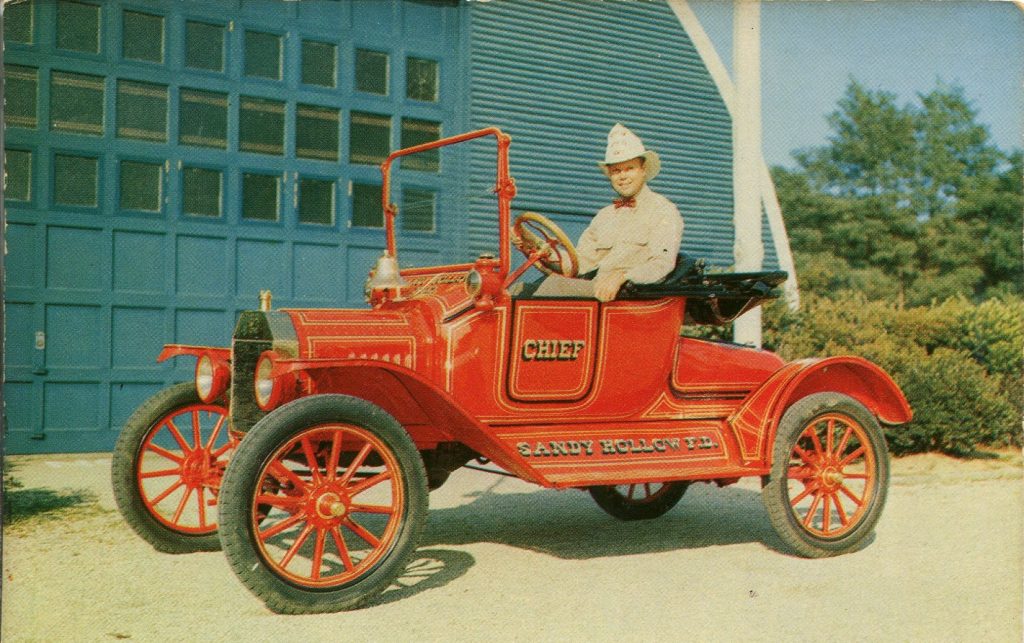 Equally perplexing is the history of the Indian Truck Corporation. Initial research points suggested that because the font-style used in the truck emblem was near that of the motorcycle emblem that Indian Trucks and Indian Motorcycles were products of the same company. This theory was soon discarded. The next step was to seek out corporate names no longer in use. The result: identical.

The very name, Indian Truck Corporation, does not appear on the list of known North American fire equipment companies now defunct. The list is a publicly edited encyclopedia of information on fire departments, fire equipment, and firefighting techniques. Consequently, accuracy is questionable, but it is the only data source available. Currently, the 212 entries include companies that operated between the 1880s and 2017.

Ergo, we may assume from the postcard that whoever built the fire truck in question, did so around 1937, and did an admirable job. As a fire truck enthusiast, I am sorry their business was so short lived. 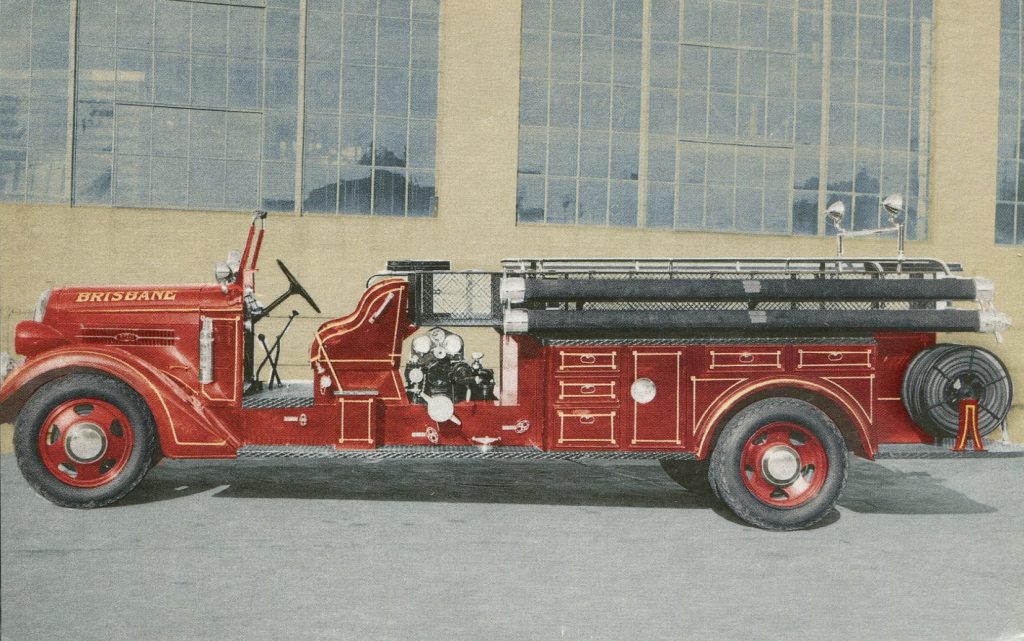 Seagrave started in Detroit, Michigan, in 1881. While with that name it was the oldest manufacturer of fire apparatus in the United States. After a decade, the firm relocated in Columbus, Ohio. In 1963, Seagrave sold its assets to FWD.

Often remembered simply as FWD (Four Wheel Drive), the company was founded in 1909 in Wisconsin. They were the first manufacturer of heavy duty military and commercial vehicles in the United States.  Additionally, in the mid-20th century, FWD in branch operations, expanded and continued development of fire apparatus under the already famous brand name – Seagrave. 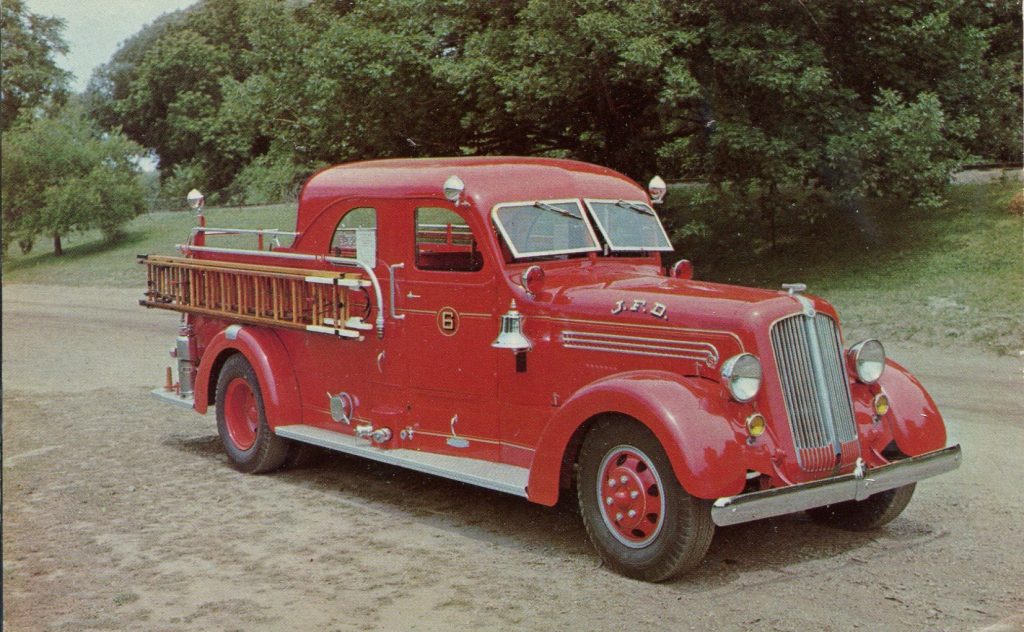 1939 Seagrave
This rig from the Society for the Preservation and Appreciation of Antique
Motor Fire Apparatus in America’s muster at Greenfield Village in Dearborn,
Michigan on July 2 and 3, 1977. It is a 1,000 gpm (gallons per minute) pumper.

The collector of Fire Company related postcards has much to choose from. These four cards are not old by most standards, but they are fun to research.

Oh, please don’t try to visit the Carnival of Cars Museum. It was a colossal Broadway fiasco. It closed within a year.

The Staff of Postcard History offers this article for your enjoyment. It is a combined effort of many: our publisher, editor, webmaster and collectors/contributors far and wide. Please use the COMMENTS feature below to let us know how we're doing.
PrevPreviousA Day at the Burnham Beeches
NextAlpine PostkartenNext
4 Comments
Oldest
Newest Most Voted
Inline Feedbacks
View all comments
Ken

Fire trucks and firefighting and fire badges are my favorite topics. Thanks for this article.

The Carnival of Cars story reminded me of the fiasco that was AutoWorld. Purported to make the Michigan city of Flint a tourist mecca, the “attraction” attracted such small crowds that it closed within a few months of its 1984 opening. After being revitalized, it was gone for good by 1994.