A Day at the Burnham Beeches

Do you remember events from your childhood that are vivid, but through the years the details have faded? You know it happened, but you don’t remember when or why or even how you got there. 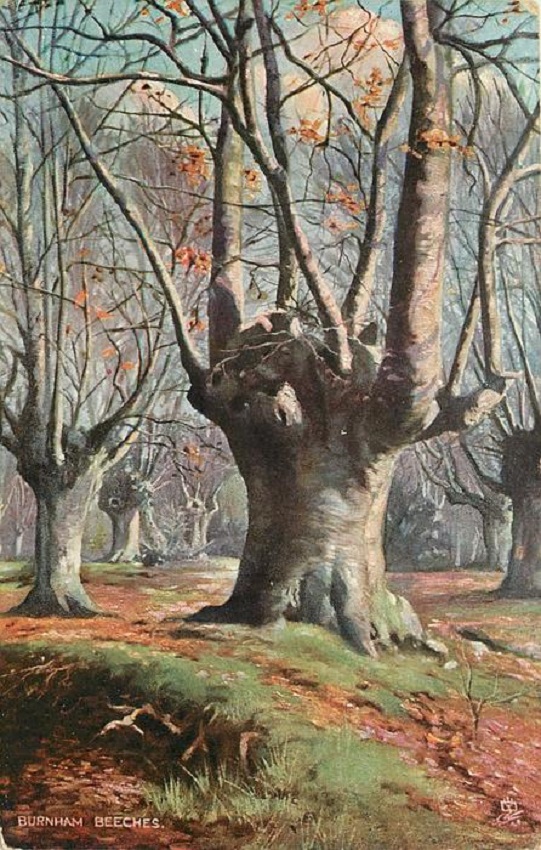 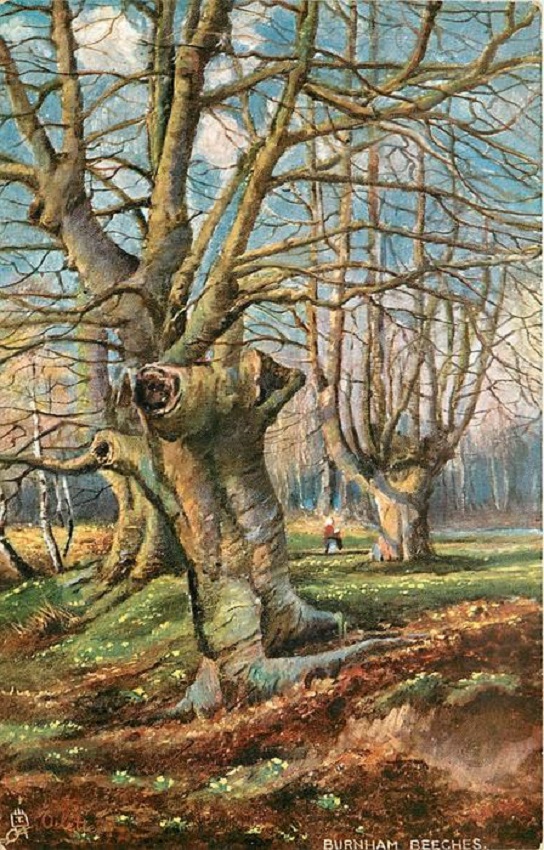 The trees (in Tuck Set No. 6219) in a place called Burnham, in Buckinghamshire, are a foggy memory except for two things: the strange and eerie beauty of the trees and picnic sandwiches. Whenever we had a day-out, my mother would make a lunch to be enjoyed along a road to places where time would pass far from father’s work.

Let me tell you about the sandwiches. Memory of our sandwiches is vivid because I had so many of them. They were cheese sandwiches, sliced cheddar to be exact. The cheese was placed between two slices of some kind of multi-grain bread slathered with un-salted butter, along with whatever green leaf was available, some very thin slices of apple, and Britain’s most-loved condiment: Branston Pickle.

Branston Pickle is a product few Americans know. The first taste of Branston Pickle will make you wonder what you’re eating. It is not the usual pickle relish found in ballpark hotdog stands. It is not a cucumber pickle, Branston Pickle is made from vegetables that are pickled with a sauce make from tomato vinegar, apples, and spices like paprika, pimento, and cinnamon.

Yes, I know it sounds awful and it is an acquired taste, but if you like sweet and tart in the same mouthful, you will always want another of my mother’s cheese sandwiches. 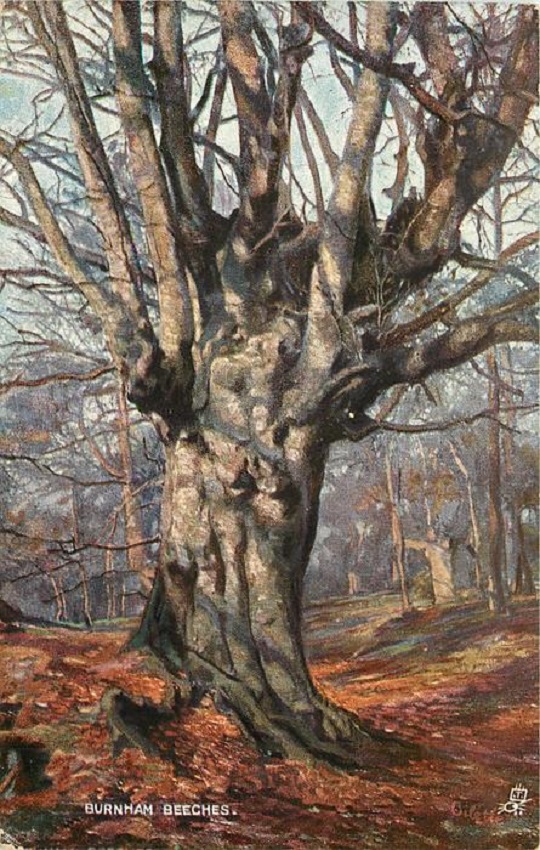 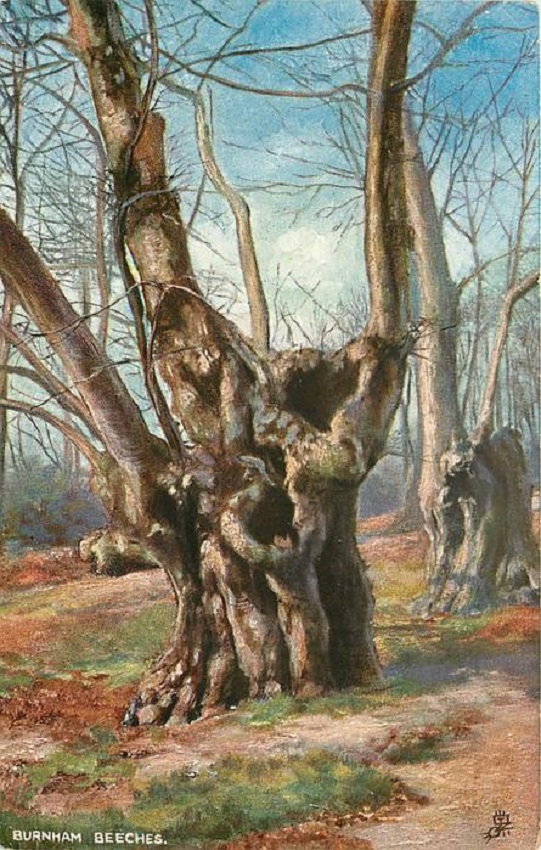 Let me tell you about the trees. I don’t remember them well (after all, I am telling you something from fifty years ago), but the postcards are helpful in making me remember how large they were.

I guess it could be said that they are dinosaur trees. Left-overs from the great forests of the fifteenth and sixteenth centuries that covered most of southern England, from Cornwall, in the west, to Sherwood Forest near Nottingham. The grove was laced with paths and trails covered with fallen leaves and often blocked by fallen limbs. It was never hard to get over the branches. You simply sat down and spun yourself ‘round by throwing your legs in the direction of least hamperage. I don’t recall any splinters in my bum (sorry, no offence intended).

A Google search reminded me that since there is a vast amount of foliage (greenery) and plenty of dead wood in the area that insect and wildlife are plentiful. I’m not sure about the insects, but I do remember seeing squirrels and fox. 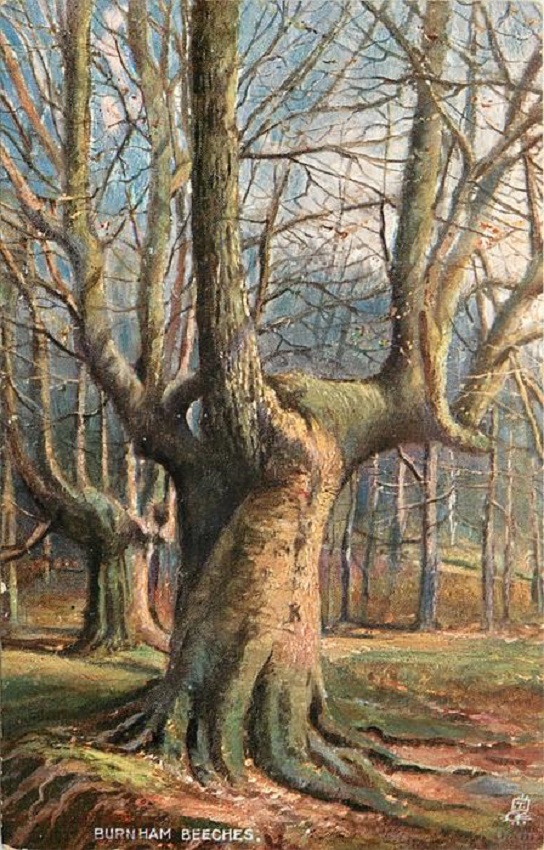 My usual theme in postcards is entertainment and entertainers, so I can’t help myself for going off-topic.

Certainly, there is more than trees and sandwiches that can be told about Buckinghamshire. Have you heard of Pinewood Studio? You have if you have seen a movie made in England.

Pinewood is a television and film facility only a few miles from the Burnham Beeches. The studio has been there since the 1930s and in the ‘40s served as a film production center for the war effort. Pinewood’s rich history is another story for another time, but if you indulge me, I feel duty bound to mention a few of the wonderful movies produced at Pinewood. They include Robin Hood, Prince of Thieves, The Story of Robin Hood and His Merrie Men, The Crying Game, First Knight, Doctor Who, Goldfinger, The Princess Bride, and at least two of the Harry Potter series of films.

Oh, one more thing, I don’t want it thought that the film company goes in willy-nilly and uses the forest areas without concern for the environment. The filming within the forest is strictly controlled and limited to a few days annually. And filming is never permitted in the highly sensitive environmental areas.

As above, it has been years since my visiting of the Burnham Beeches. I can’t recommend that you visit for today it may be much different, but wait, isn’t this the reason we collect postcards? To help us remember all the good times.

If you know the area, please add a comment at the bottom of this page.

Kaya Fellcheck is a retired optometrist who planned a return to her girlhood home in Vermont. Caught in the virus lockdown, she now lives in Alberta, Canada. The good folks here adopted me; I may stay.
PrevPreviousReminder Postcards
NextAmerican Fire TrucksNext
2 Comments
Oldest
Newest Most Voted
Inline Feedbacks
View all comments
Bob Kozak

Since I’m an American, I’m not familiar with Branston Pickle, but I’ll try it if I ever get to England.

You can buy Branston Pickle in the States. I buy it in the ethic food section of my local supermarket.