Six days each week the mail carriers of the United States Postal Service deliver thousands of postcards to us and our neighbors that convey invitations, notices, announcements, and reminders. In many ways this is nothing new. This can be said and here is proof that using postcards as reminders has been happening for over 100 years. 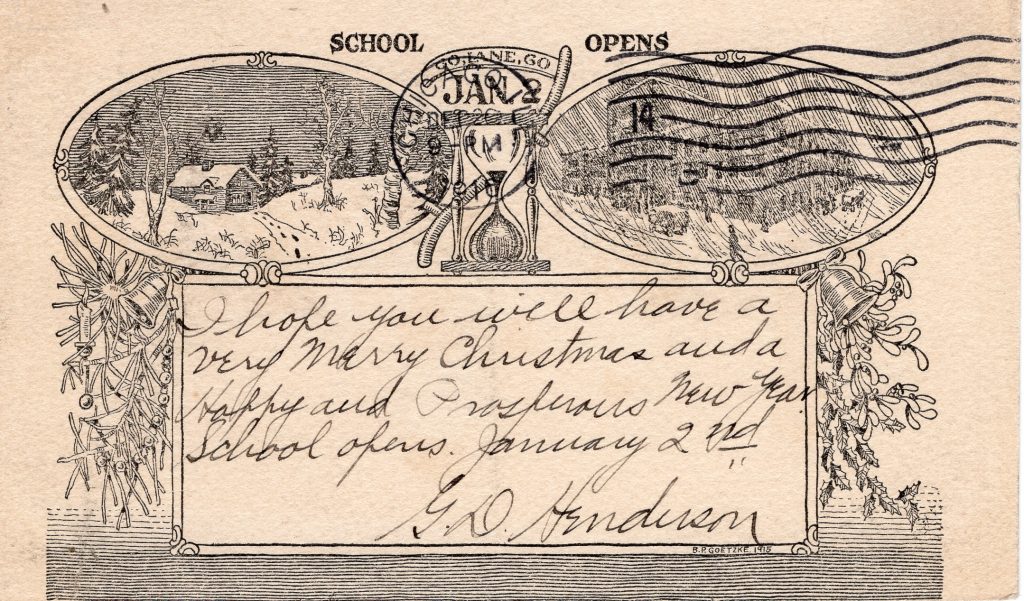 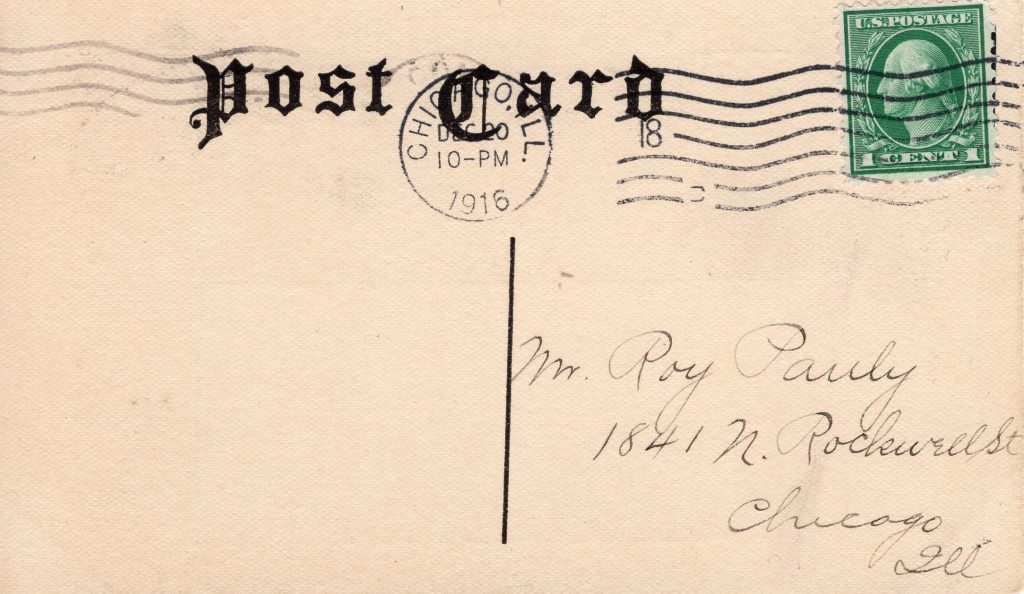 The message of this cards is …
“I hope you will have a very Merry Christmas and a Happy and
Prosperous New Year. School opens January 2nd.

An attempt to discover the identity of G. D. Henderson failed. The only Henderson with a first initial “G” in the Thirteenth Census of the United States (1910) was a chauffeur. It seems unlikely that the card was mailed by G. Henderson, the chauffeur.

The card is without a question, a reminder to the students in the Chicago School System that the faculty wished their students a happy holiday, but they should keep in mind that school resumes after the holiday and they should be prepared.

However, another attempt, this time to discover the recipient of the card, was more successful. In the Population Schedule of the 1910 census and a 1915 City Directory, one Roy Pauly was found at 1841 N. Rockwell Street, Chicago. In both sources Roy was listed as a student, at home with parents, Henry and Amanda. Henry worked as a motorman for the Chicago streetcar system. Roy’s parents were both born in Germany. Henry became a naturalize citizen in 1874. Roy was 13; his parents were 36. Roy and his parents were living with Henry’s parents, Henry, Sr. and Julia.

On May 17, 1918, Roy married Katherine Madsen and moved to Humboldt Street. The following month he registered for the 1917 draft and was described as a man of slender build, with blue eyes and brown hair.

Katherine died between 1921 and 1930 and Roy remarried sometime before 1940. With his new wife Irene they had a son and two daughters. He died at Los Angeles in 1983 at age 82; he is buried in the famous Forest Lawn Cemetery.

The irony of this story is that Roy R. Pauly was a mail carrier.

I suspect it would be inane to wonder if Roy Pauly ever delivered reminder postcards to anyone. The obvious answer would be, of course he did. The examples we bring you with his story are all modern, 4” x 6” on average. We will forego the captions and remind you of the myriad of events they were reminders for.

Postcard History is grateful to our friend Shav La Vigne for his assistance with this article.. The wonderful card that inspired this story is his. Thanks, Ray

Ray Hahn is a retired educator, but he has never stopped teaching. His decades of researching, writing and editing a newsletter for the South Jersey Postcard Club has been a world-class education in trivia. In addition to postcard collecting, Ray’s other interests include history, genealogy, and touring the world with his wife Marie. Ray often advises his readers to "Join me as we explore the world one postcard at a time." Ray and Marie live in New Jersey.
PrevPreviousMay 2021 Postcard History Quiz #5
NextA Day at the Burnham BeechesNext
5 Comments
Oldest
Newest Most Voted
Inline Feedbacks
View all comments
Shav La Vigne

Great job Ray! I love all of the details you are able to find out from a simple postcard.

I would assume G.D. Henderson had a rubber stamp of the message — can’t imagine someone writing that message out by hand hundreds of times!

Thanks for including the postcard with the Catalina Casino! I never knew of this place and that postcard piqued my interest. WOW. What a beautiful piece of architecture and fascinating structure!

Love the postcard you featured and the article!