Yorkville, a Night in the Old Country

Only hard-boiled New Yorkers call the area “Yorkville” these days, with its embarrassing evocations of ethnic immigrants and political extremism. Most refer to the neighborhood as the “Upper East Side” today – from the 1970s or so to the ’90s and from the East River to Third Avenue. It gets identified today with its ritzier section between Lexington Avenue and Central Park.

Before World War II and even later until the 3rd Avenue El was taken down and initiated a still unabated trend of luxury apartment construction, the area was known as “Yorkville” and primarily inhabited by working to middle-class German American immigrant families. Secondarily, the neighborhood also attracted Central Europeans, Czechs, Hungarians, Austrians, Slovaks, and others. Stable old-world social and cultural institutions like the Liederkranz of the City of New York and the Czech community organization Delnicko-Americky Sokol stood as solid firmaments among immigrants adapting to their new home. 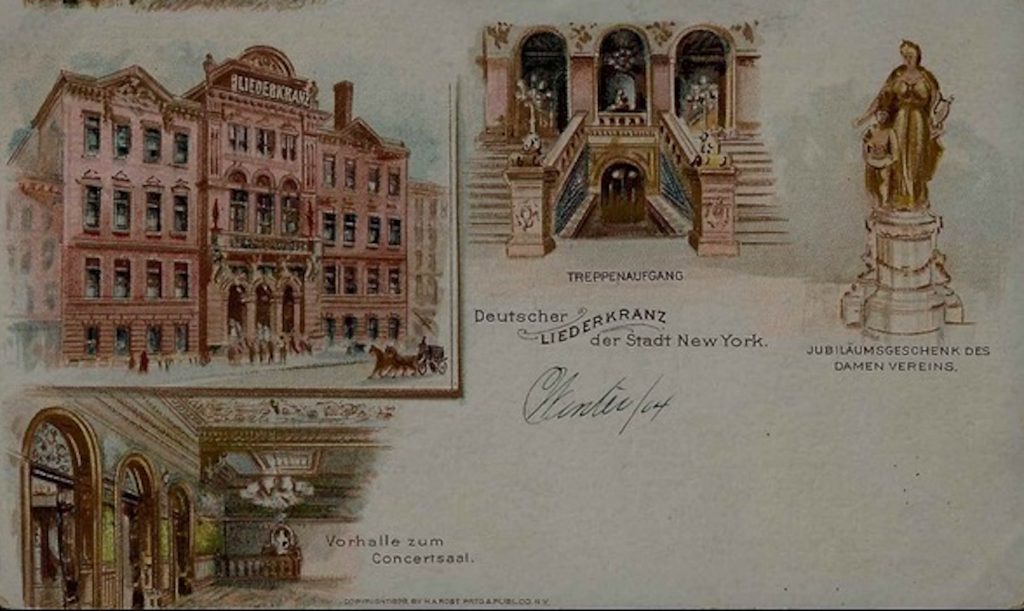 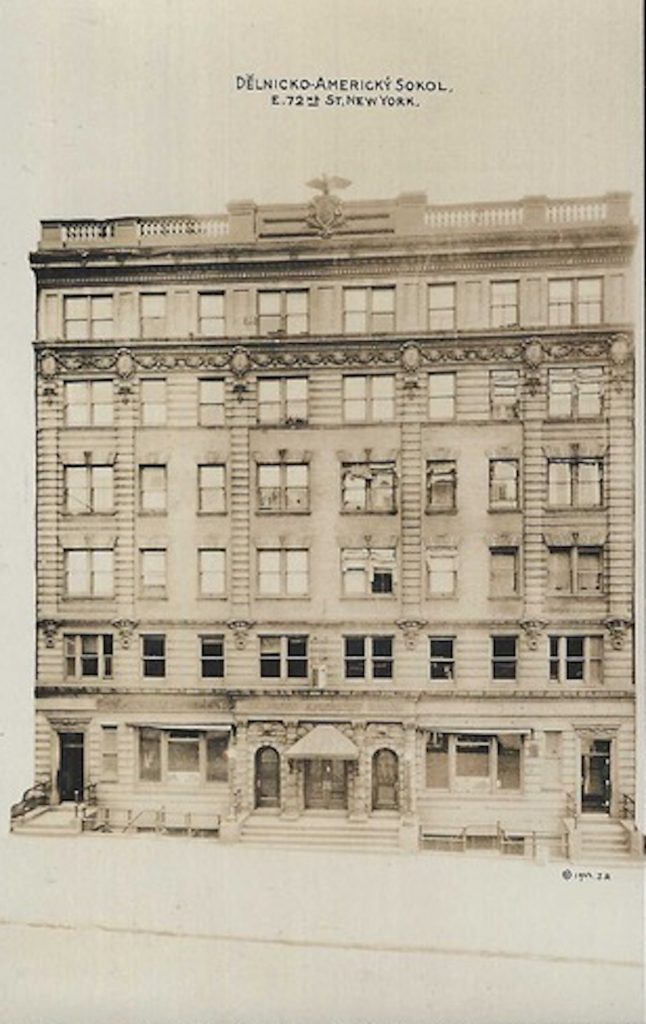 Another timeless feature of the neighborhood was Gracie Mansion, surrounded by Carl Schurz Park, the official residence of New York City’s mayors. Political leaders like Jacob Ruppert (also the owner of the New York Yankees) and Robert F. Wagner, Sr. and Jr. took pride in their German-American heritage and roots in Yorkville. 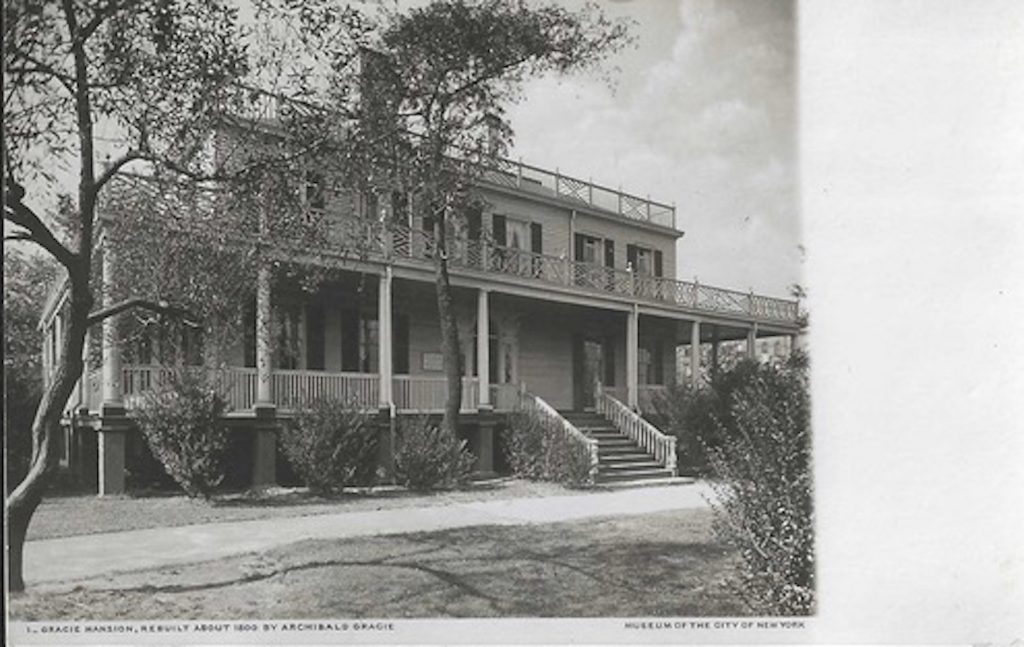 The streets were lined with purveyors catering to the culinary tastes of these populations – butchers like Karl Ehmer and Schaller & Weber, bakers and quirky shops like Paprikas Weiss at Second Avenue and 83rd, that offered more varieties of paprika than you knew existed, as well as dried fruits, salads, chocolates and everything else to ignite your reptilian brain. 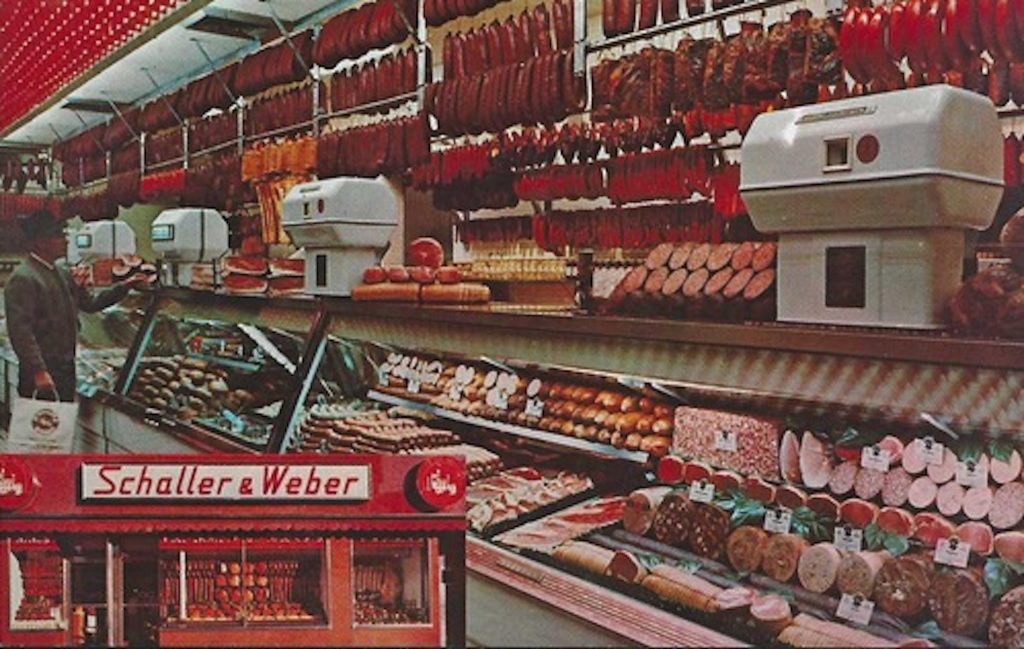 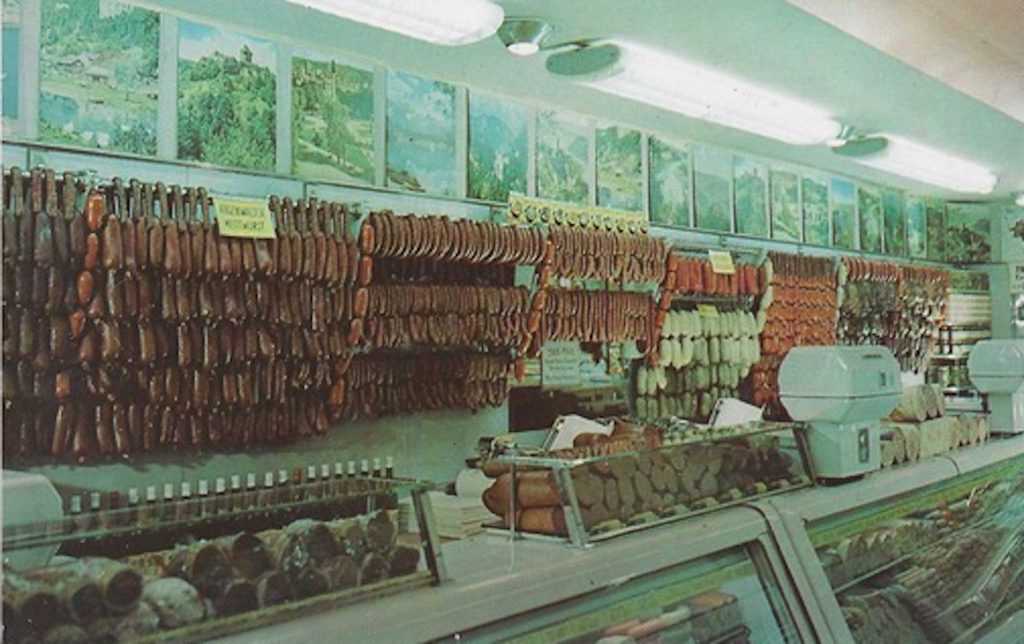 In Marcel Proust’s In Search of Lost Time (A la Recherche du Temps Perdu) it was a Madeleine cake that sparked connections to his memory and childhood. In Yorkville you could have a Proustian moment on every block.

For those visiting from homes overseas, from elsewhere in the US, for fellow New Yorkers or for neighborhood residents, every evening could relive a night in the old country at one of the numerous night clubs and cabarets that lined Yorkville’s streets. Language, music, songs, dancing, costumes, cuisine and artworks created an experiential universe that would convince visitors they were back in Berlin, Bratislava, or Budapest.

Restaurants, night clubs and cafes offered attractive postcards to everyone as a souvenir of the occasion or for writing back to friends and family.

An important common denominator was beer – vast quantities of brew offered in multiple gigantic steins – made in local breweries, that is, except when Prohibition temporarily spoiled all the fun. Famous old breweries like Ruppert, Doelger, Hell Gate, Jetter, and others crowded the neighborhood cheek-by-jowl giving the area a semi-permanent scent of lager. Clubs like The Lorelei, Maxl’s, and the 86th St. Brauhaus made clear that their carryings-on would be fueled by copious quantities of quaff. 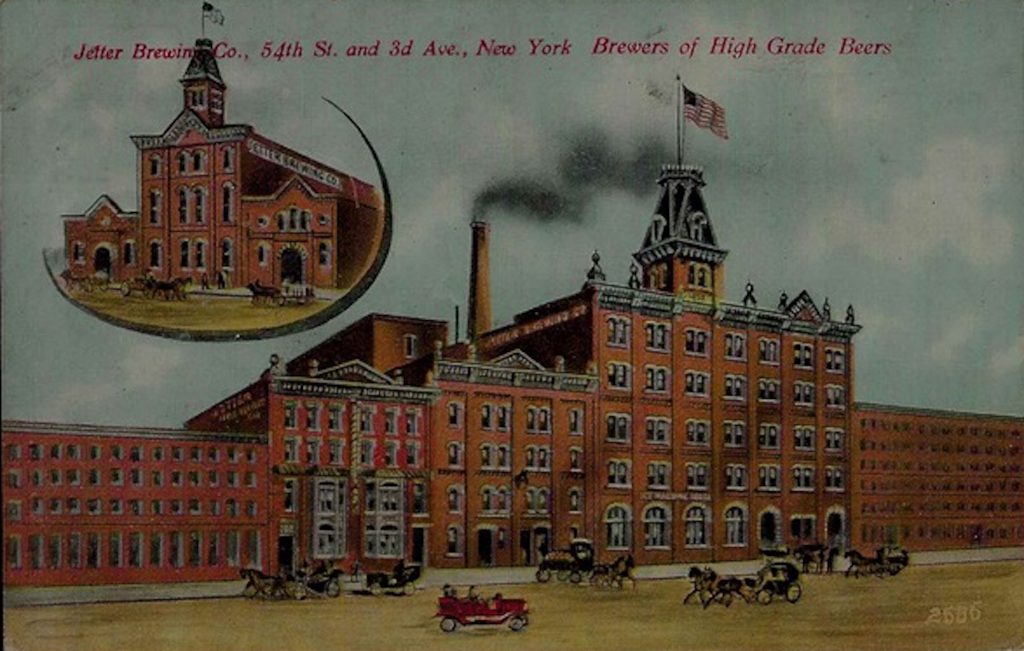 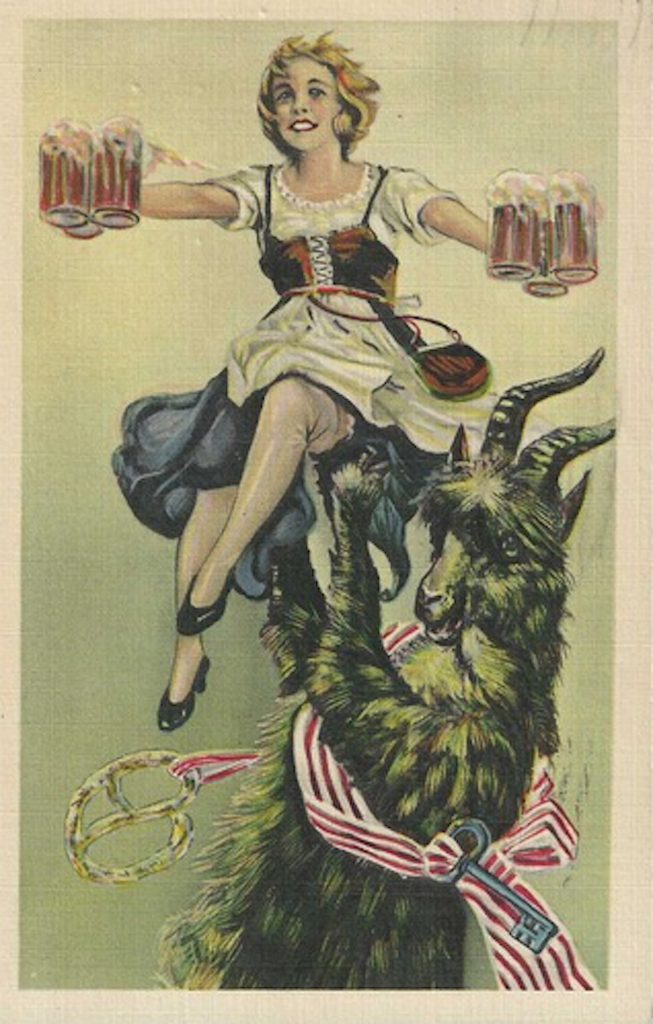 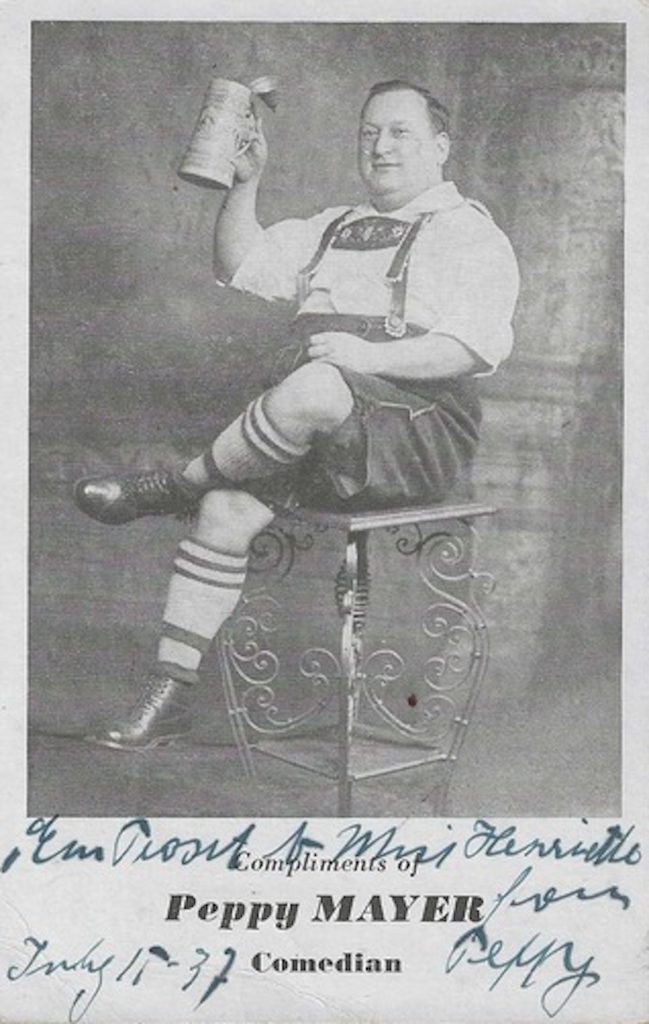 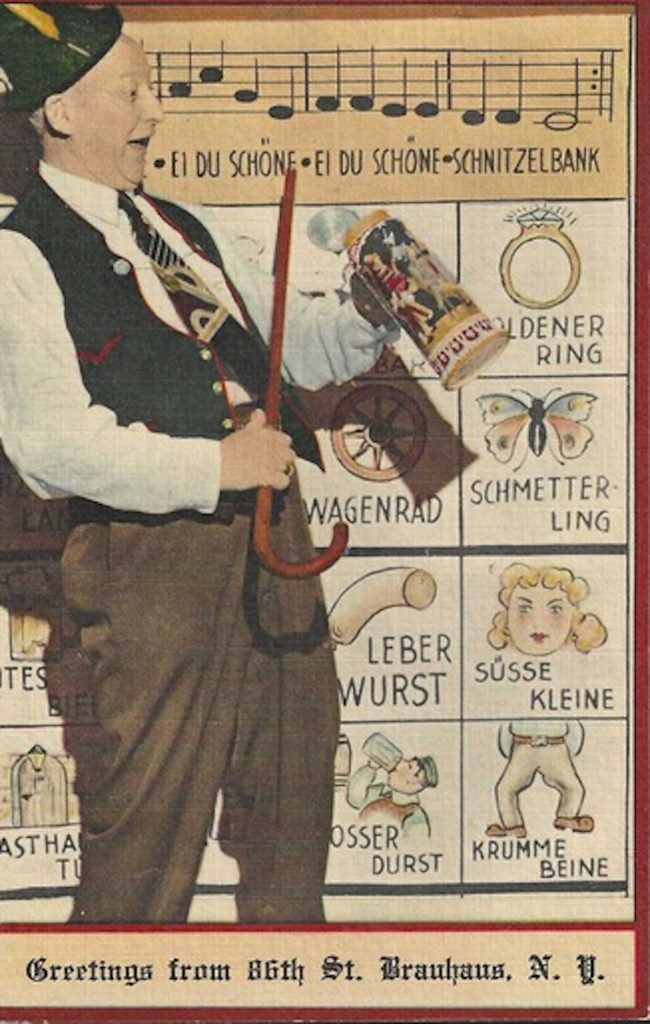 On streets nicknamed “Sauerkraut Alley” and “Goulash Row,” you were sure to get a heaping load of Gemütlichkeit (coziness) along with your Bratwurst (sausage,) Sauerbraten (marinated beef roast), and Wienerschnitzel (breaded veal cutlet).

Yorkville had been a semi-rural retreat from the bustling city downtown through much of the 19th century, enjoying breezy views from its forested hills and bluffs. However, a horrific tragedy invigorated the migration of ethnic Germans to the area. In 1904, The General Slocum, an excursion boat carrying mostly women and children from the Lower Manhattan’s Kleindeutschland (Little Germany) caught fire and sank. More than a thousand souls were lost in New York’s greatest disaster until the September 11th terrorist attack.

The downtown community was shattered by the tragedy. Many moved to Yorkville, its shores sitting opposite of the frothy confluence of several waterways known as Hell Gate, where the General Slocum tragedy took place. It was a modestly scaled neighborhood, with delightful parks and local institutions like libraries and community centers. The side streets included many old-world artisans and craftsmen serving the wealthy western section of the Upper East Side – dress makers, milliners, violin-makers, upholsterers, framers, watchmakers, cabinet-makers, and gold-leafing craftsmen.

From the moment that Prohibition ended in 1933, the clubs and cabarets that lined Yorkville’s main streets threw their doors open. Suddenly it was Oktoberfest every night of the week. From the looks of the postcards, the tailors were doing land office business in Lederhosen (Bavarian leather shorts). The names of these nightclubs were as enticing as the sounds emanating from within – Gloria Palast, Alt-Heidelberg. Entering Rudi and Maxl’s Brau-Haus at 239 East 86th, you could imagine encountering a medieval Gothic manse. Next door at 241 East 86th Ivan Frank and his Bavarians would be giving you as much Oom-pah-pah as you could handle. 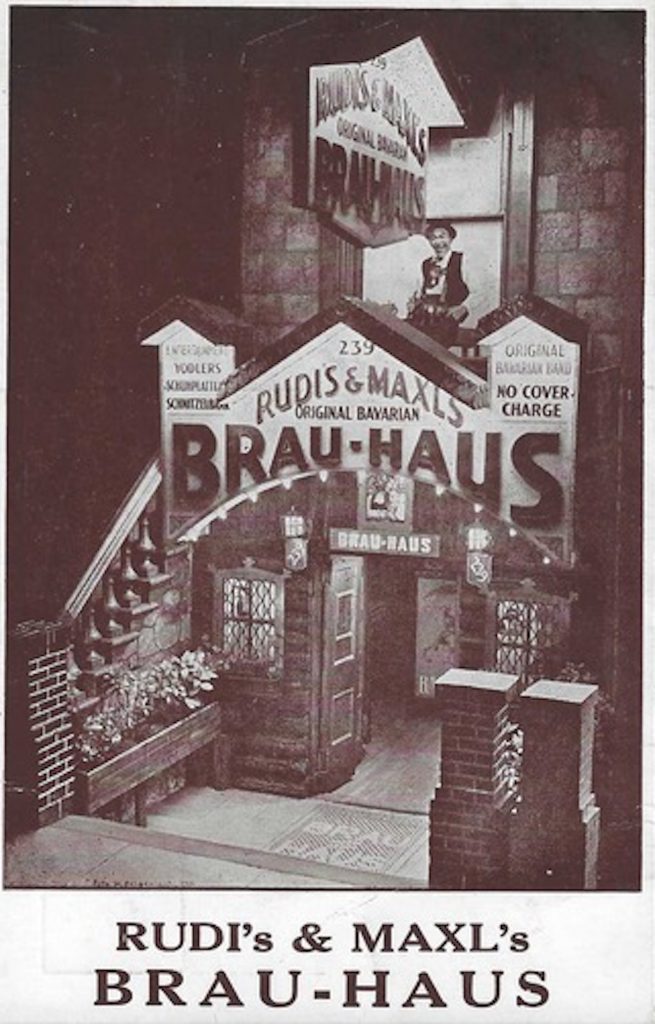 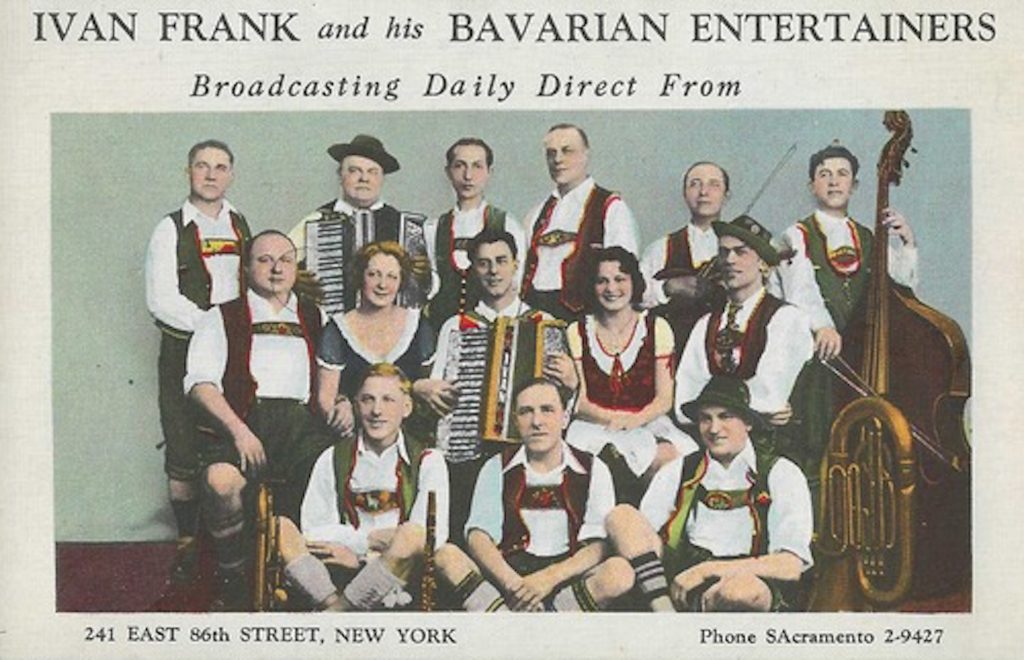 As the Bauhaus and Art Deco styles became influential on the Continent, you could be sure that Manhattan and Munich were equally fashionable at places like Corso at 205-209 East 86th and the Rheinland Cabaret and Restaurant at 228 East 86th. 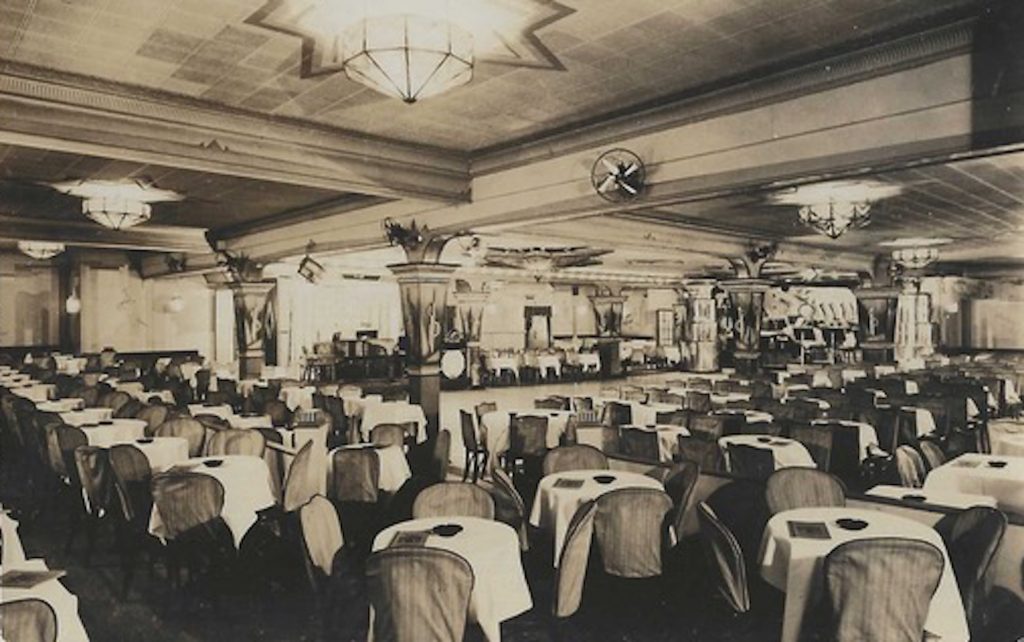 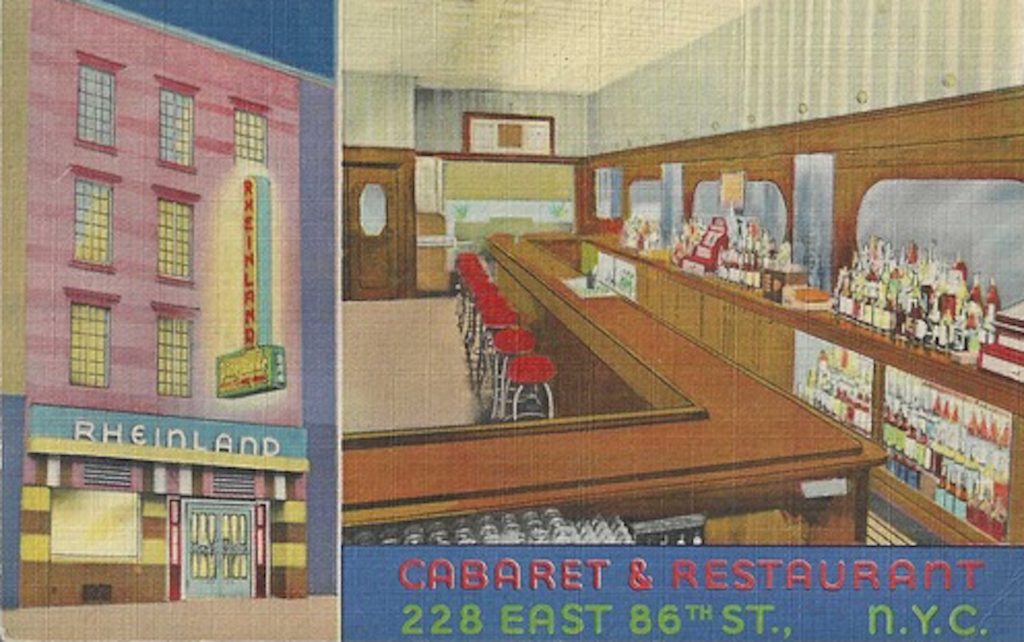 Then, for the morning after, maybe you would like to enjoy some Beethoven and Schubert with your coffee and Sachertorte (rich chocolate cake) at a Konditorei (pastry shop) like Café Geiger. 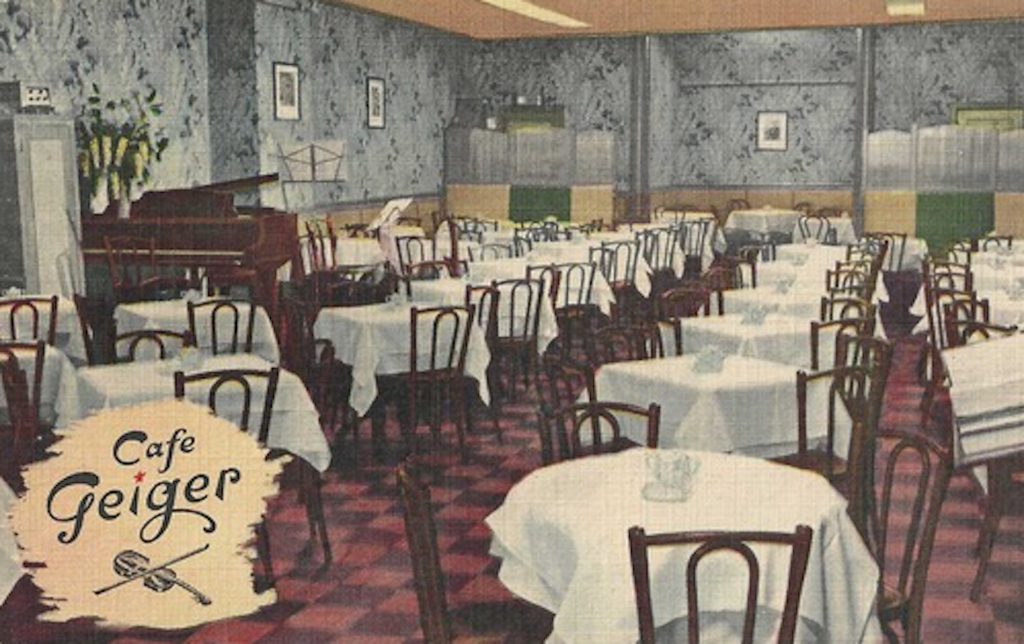 On your next visit, you could focus on other places in Mitteleuropa (Central Europe) like Switzerland at Little Switzerland, Hungary at Chardas, Café Tokay or Zimmerman’s Hungaria, or Austria at Max Loew’s Viennese Lantern. While having a great meal and listening to authentic music, you would also be collecting some of the best linen advertising postcards ever made. 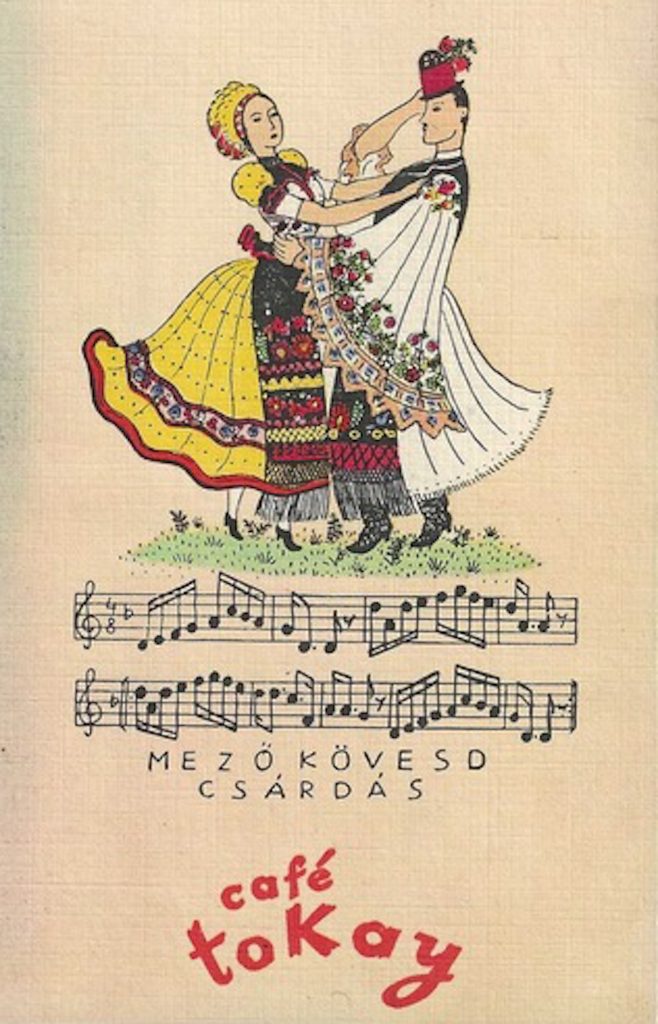 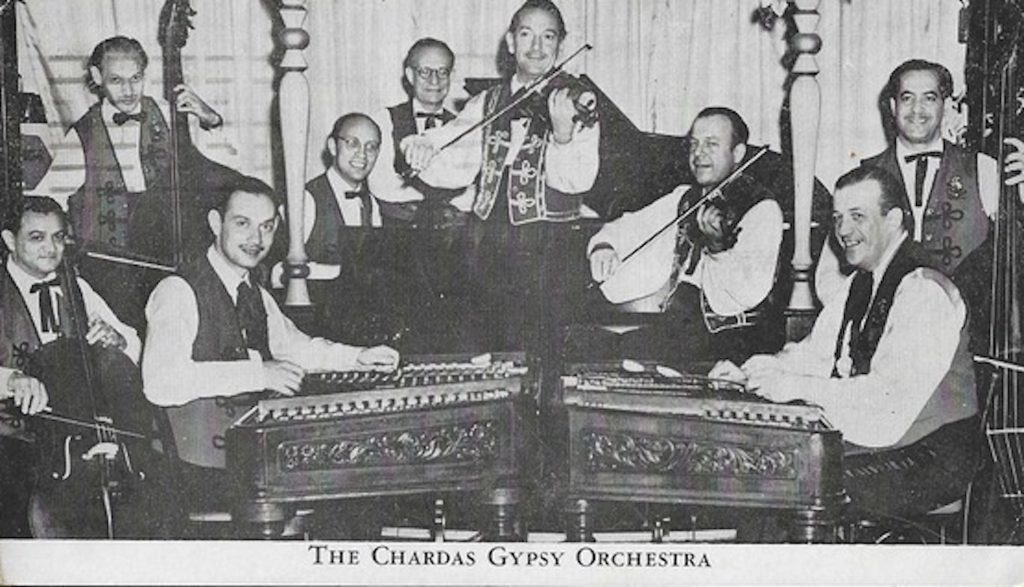 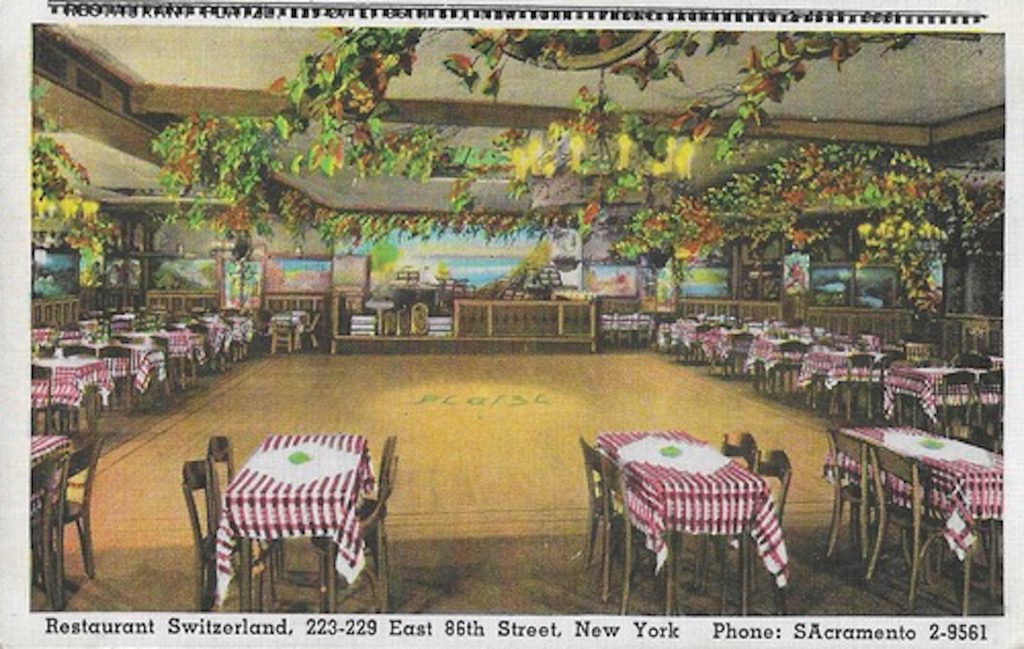 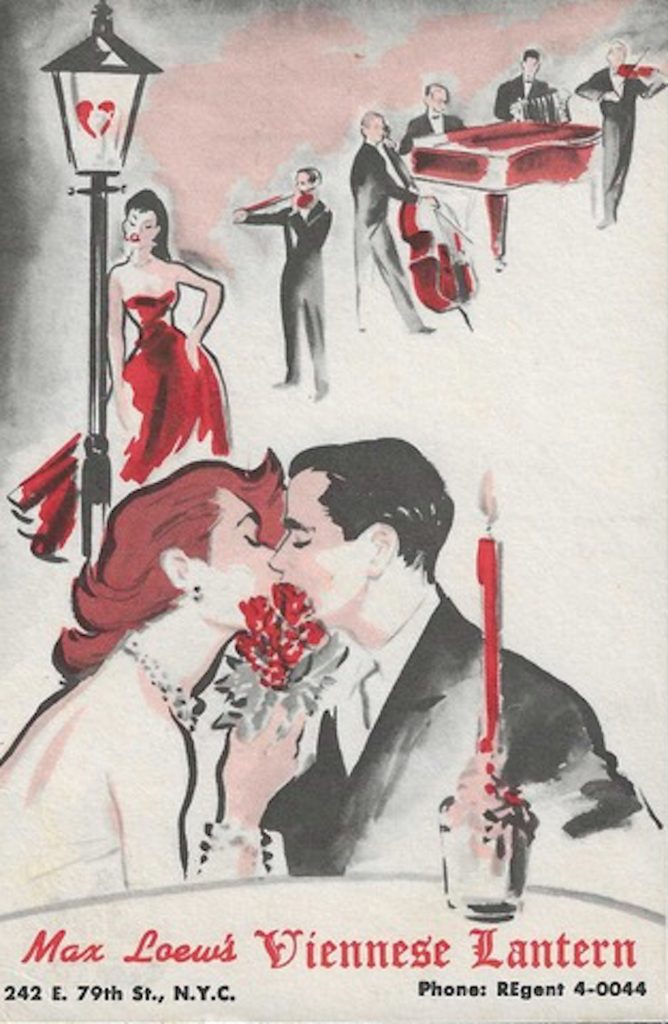 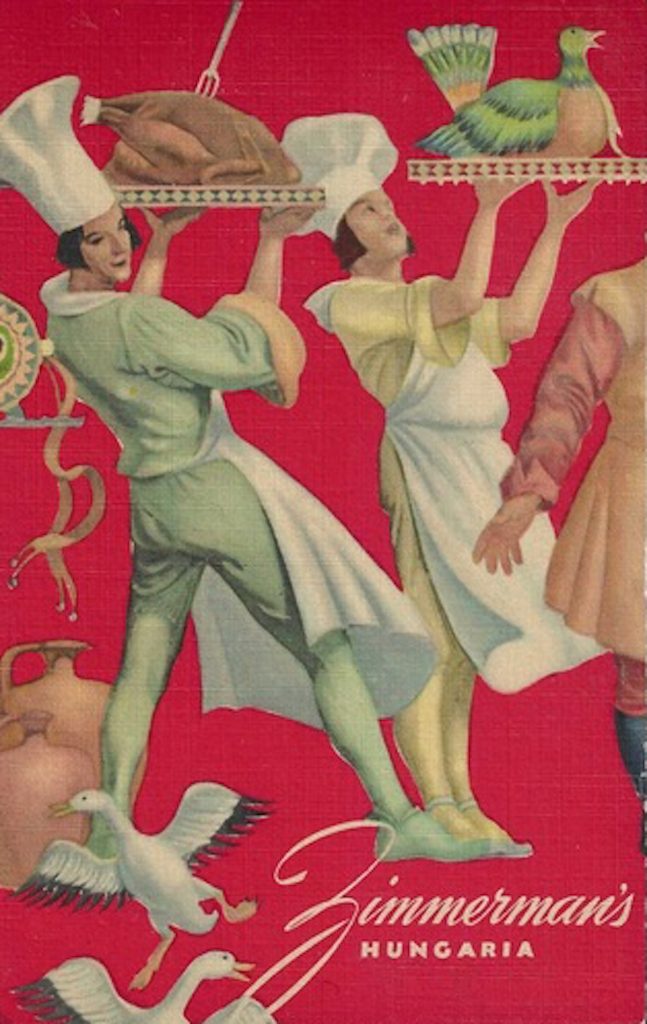 It all seemed so bright and brotherly but as the 1930s proceeded into the ’40s, a dark cloud appeared in Yorkville. The German-American Bund, a nativist German group with affinities toward Hitler and the National Socialist Party began to organize street rallies and marches on 86th Street and on 2nd Avenue. They also staged a mass demonstration at Madison Square Garden. The Bund organized training camps for German young men in the suburbs outside of the city, as shown in this postcard from Long Island. 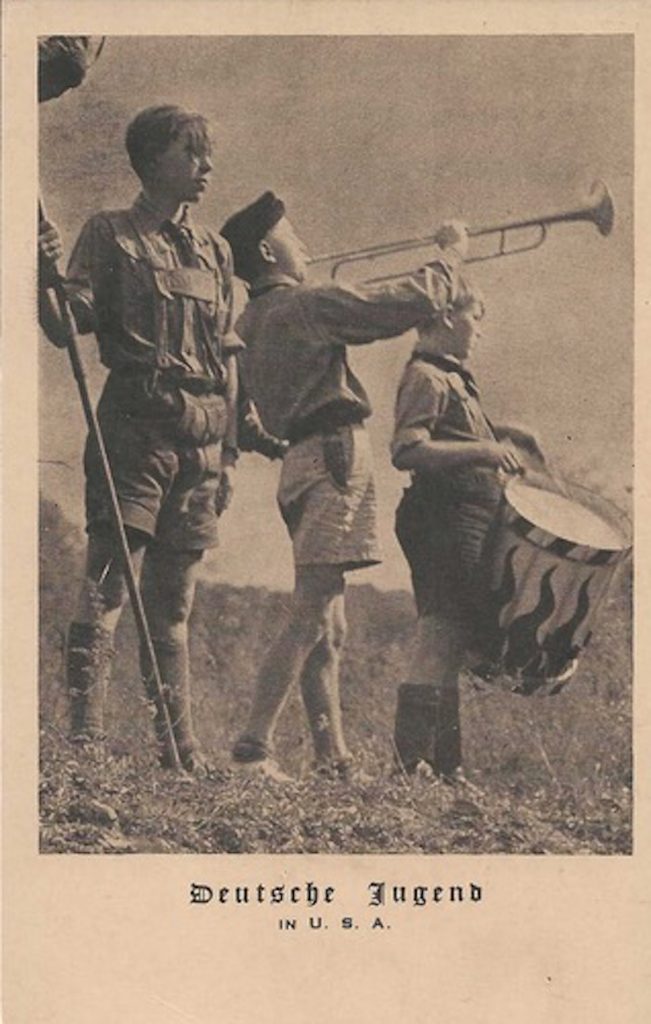 German anti-fascists were horrified by the damage being done to the neighborhood’s reputation. Moreover, the Bund’s manifestations were actively challenged by Jewish groups as well as by patriots from nations being overrun by National Socialism. Street fights became common. At a certain point, as marketers say, Yorkville’s brand became irreparably harmed. To be clinking a “prosit” (toast) on 86th Street seemed downright macabre.

In the aftermath of the world war and the elimination of the elevated railway along 3rd Avenue, the neighborhood went through a period of rapid change as luxury high-rise apartment buildings altered the scale and demographics of Yorkville. Middle-class Germans and Central Europeans were moving out to Queens and Long Island and being replaced by young families, choosing not to define themselves ethnically. Instead, they were chasing opportunities being made available by New York’s burgeoning advertising and communications industries as well as by the expanding medical and healthcare infrastructure growing on Manhattan’s Upper East Side.

The Lederhosen days were over.

Hy Mariampolski holds a Ph.D. from Purdue and spent his career in international marketing and market research. Nowadays, living in East Hampton, New York, he collects, trades, sells and writes about postcards. Hy has also been teaching a Zoom course on New York history through postcards called “Wish You Were Here” for CL&L, an adult education affiliate of Marymount Manhattan College.
PrevPreviousWindmills
NextThe Church in the WildwoodNext
10 Comments
Oldest
Newest Most Voted
Inline Feedbacks
View all comments
Sue Jacobs Schaffzin

Very interesting, thanks! I was a westsider growing up but of course I knew of Yorkville

Hy, as always a well researched article with loads of interesting details and illustrations.
One of the keys to ethnic neighborhood research is to study the local churches. With the German immigrants there must have been an interesting mix of Catholics, Protestants and Jews. Or did one group greatly outnumber the others. With the Germans I would also guess there were a mix of Democrats, Republicans, Socialists but not too many Prohibitionists. There has to be a lot of story on both sides of the post cards.

Schaller & Weber is on 2nd Ave, right off 86th Street. The Heidelberg Restaurant is still next door. Do you remember the Old Dutch Delikatessen?

I liked this article and got a very good feel of what that area must have been like. I had to get out my box of NY postcards but they need a lot of organizing and mainly found things like Stature of Liberty, Times Sq etc. Thanks .

I grew up in the Cleveland area and remember several German and Hungarian restaurants, but such establishments appear to be non-existent here in Indiana.

Wonderful article, some before my time. My parents immigrated in 1956 and we lived at 1523 Third Ave and then at 150 E 86 St (Regal Shoe store) steps from the Lexington Ave subway. In 1960 we moved back to Munich and returned in 1965 when I was 15. We lived at 306 E 83rd St. I remember Cafe Geiger, Schaller and Weber and Ehmer’s well. The butcher always gave the children a slice of “Wurst”. My sister and I went to St Ignatius Loyola School and Church on Park Ave betw 83&84th. For my communion dinner out I picked… Read more »

Loved the article and the pictures, most before my time, but remember my Mom talking about the PlatzI and Brauhaus. I lived in Yorkville in the 70s and 80s, and worked in some of the German restaurants in 1973 to 75, and then again in 1980. It was not over for many years after the war, there were several German places open, like the The Bremenhaus, Cafe Hindenburg, The Kleine Konditorei, The Heidelberg (still open today, on 2nd Avenue). Schaller and Weber is still there. My in laws owned The Garden Bar, on 86th between 1st and 2nd Ave. And… Read more »

Hello everyone – if anyone is on Facebook from these comments. Join the group – Yorkville east side of Manhattan. Lots of old pictures from the neighborhood and maybe share some you have yourselves 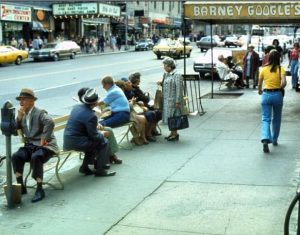