The Church in the Wildwood

There’s a church in Iowa. Of course there is! Maybe, I should be more specific.

There is a little church; it may be brown in Nashua, Iowa. There is a song about the little brown church, which has become part of the American experience.

A resident of Nashua, New Hampshire moved to Iowa after the Civil War and honored his hometown by naming his new home after his old.

Long before that on August 18, 1830, in Orleans County, (just west of Rochester), New York, Charles and Polly Pitts had a son they named William.

William was a gifted child. He proudly attended school and graduated with honors after studying with a member of the H + H (The Handel and Haydn Society). The H + H is the third oldest music organization in America; only a Boston vocal group and the U. S. Marine Band are older.)

William left home at age 19, went to Wisconsin to be a teacher, and in 1857 made a trip to Fredericksburg, Iowa to see his fiancée. Legend tells us that along the way the coach in which Pitts was traveling stopped in a small town named Bradford along the west bank of the Cedar River. Pitts wrote the song as a mnemonic to help him remember the peace and serenity he experienced at the coach stop. 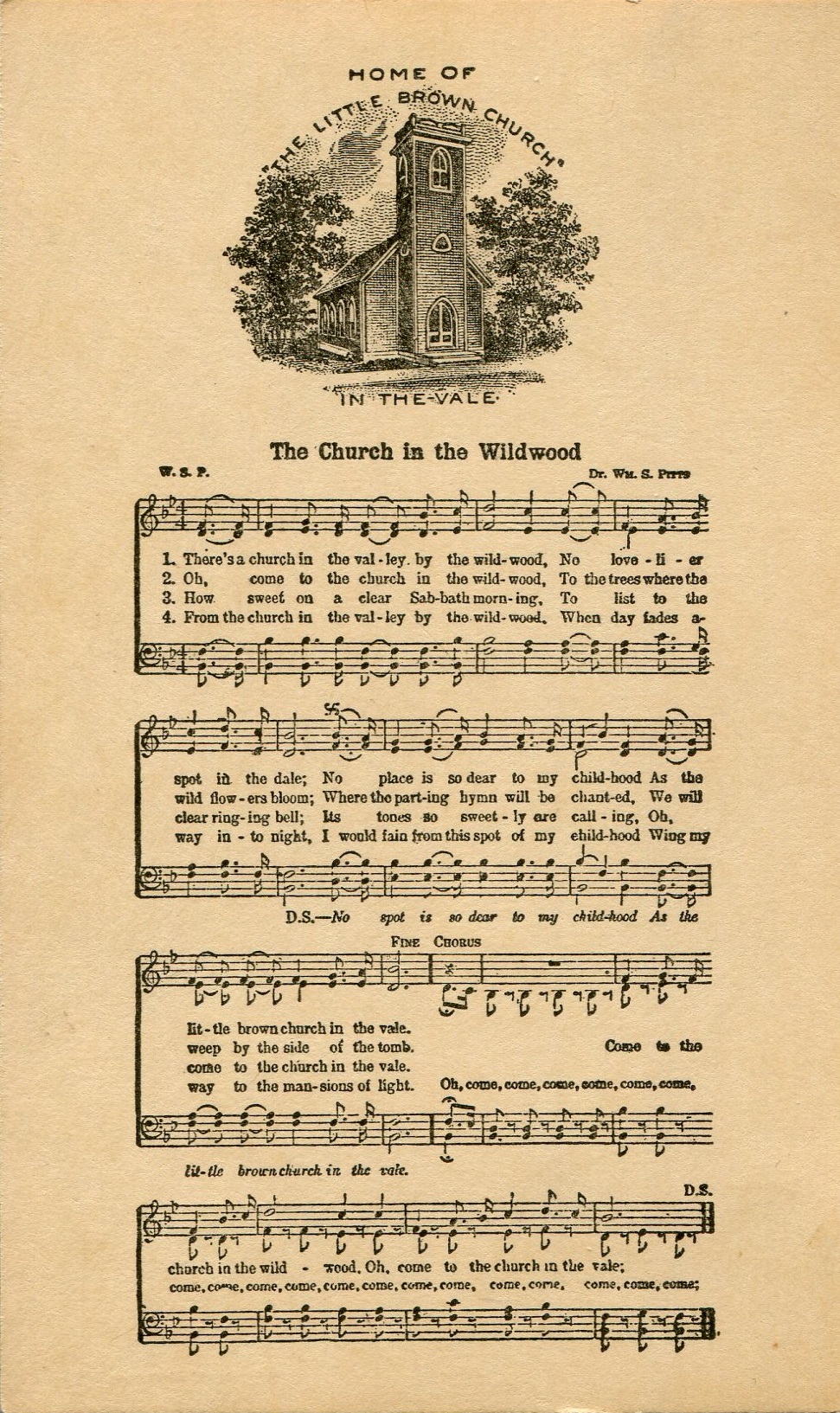 Pitts married Ann Eliza Warren, also a teacher, at Union, Wisconsin, and in 1862 decided to return to Iowa to be near his wife’s parents. By then, Bradford no longer appeared on an Iowa map, but the town of Nashua did, and today the Rand McNally Company has seen fit to include the Little Brown Church in the Vale as a tourist attraction along State Highway No. 346.

Three years later, Pitts had nearly forgotten the song, but that same year he chose to enroll in a Chicago medical college. He sold the song to a music publisher to pay his enrollment fees. After graduation in 1868 Pitts returned to Fredericksburg and practiced medicine there as a doctor and surgeon until 1906.

The church was completed and painted brown, not because of the song, but because it was the cheapest paint available, then dedicated on December 29, 1864. (The caption on the Private Mailing Card that shows the musical score and lyrics of the song, claims that Dr. Pitts sang his song at the dedication service in 1864.) Sadly this is only one of many conflicting facts in this story.)

Ann Eliza died in 1886. Pitts married Martha Grannis in 1887 and relocated to Clinton, Iowa, in 1906. Martha died in 1909 and Pitts left Iowa to be near his son in Brooklyn, New York. William’s last change of address occurred when he became a resident of the New York City Home for the Aged and Infirm, on 74th Street in Brooklyn. He died in the home on September 25, 1918. His remains were returned to Iowa and interred in the Rose Hill Cemetery in Fredericksburg.

The Church in the Wildwood remains a viable congregation.

The staff at Postcard History thought our readers may enjoy this video featuring Bill and Gloria Gaither’s rendition of this song.

Ellie McCrackin is a pen-name used by one of America's foremost archivists. Preferring to remain in the background, Ellie ghost writes for some of the leading world historians. She loves postcards and loves to write about the stories they tell.
PrevPreviousYorkville, a Night in the Old Country
NextPortraits of Old West Gunfighters by Lea McCartyNext
2 Comments
Oldest
Newest Most Voted
Inline Feedbacks
View all comments
Nelda Harris

The Church in the Wildwood is a dearly beloved song for me since I was around10 years old. One of our neighbors had a pump organ and let me do the pedals as she taught it to me. Thanks for posting it!

Great article. One of my favorite songs. I also liked the video as I watch Bill Gaither several days a week.