It is simply outrageous how assumptions can sink a project almost before it floats. Let me explain.

I have a special interest in the history of the old American west, but not because I’m a history buff. It is because many of the famous personalities were old west gunfighters and many have been the subject of movies. When the set of cards featured in this essay were discovered, I gathered them, thinking that someday I would write about the actors who played the roles of these men (except for Martha Cannary) and it would make a good story.

But first, it was important to learn about the artist who created the nearly life-size portraits featured on the cards. Sure, I found the artist’s name in several places but my searches, one-after-another failed. Finally, I emailed Postcard History’s editor, Ray Hahn and asked for help.

Here is how Ray helped. I had searched for an artist named Lea Franklin McCarty. I was curious about the name Lea, for the usual spelling is with an “h” – Leah. I was sure I had read a review of a book, published in the late 1950s which bespoke of the author as she. My assumption was that Lea McCarty was a very accomplished but mostly unknown, female artist who was using a “brush-name” or perhaps a maiden name.

When I told Ray that my contribution would be without bio-data on the artist, he put on his genealogist’s hat and found that Lea Franklin McCarty was not an unknown female, but a much accomplished male artist who was born to Del McCarty and his wife, Dorothy Lea Davenport on April 9, 1905.

Lea McCarty was a resident of Santa Rosa, California and when he died from a heart attack at age 54 in 1960, he had already completed more than 100 oil paintings of famous old west characters. McCarty’s primary sources were old photographs and tin-types. McCarty’s last portrait was of Lily Langtry.

Twelve of the personalities above were chosen as subjects of a postcard set published by Mike Roberts of Berkeley, California. Early in Robert’s career he earned a sterling reputation for his high quality Natural Color printing.

Under the guise of the lady first, this checklist is provided for your convenience. The entries preceded by an asterisk are accompanied by an illustration that follows: 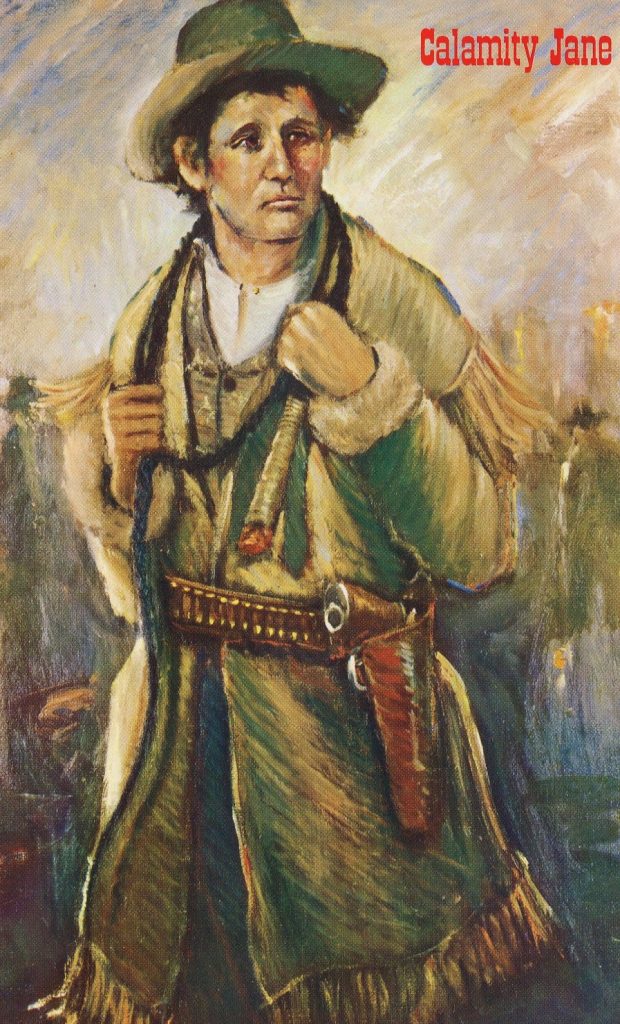 Calamity Jane. Born in Missouri, she was at one time an Army scout in the Black Hills country. 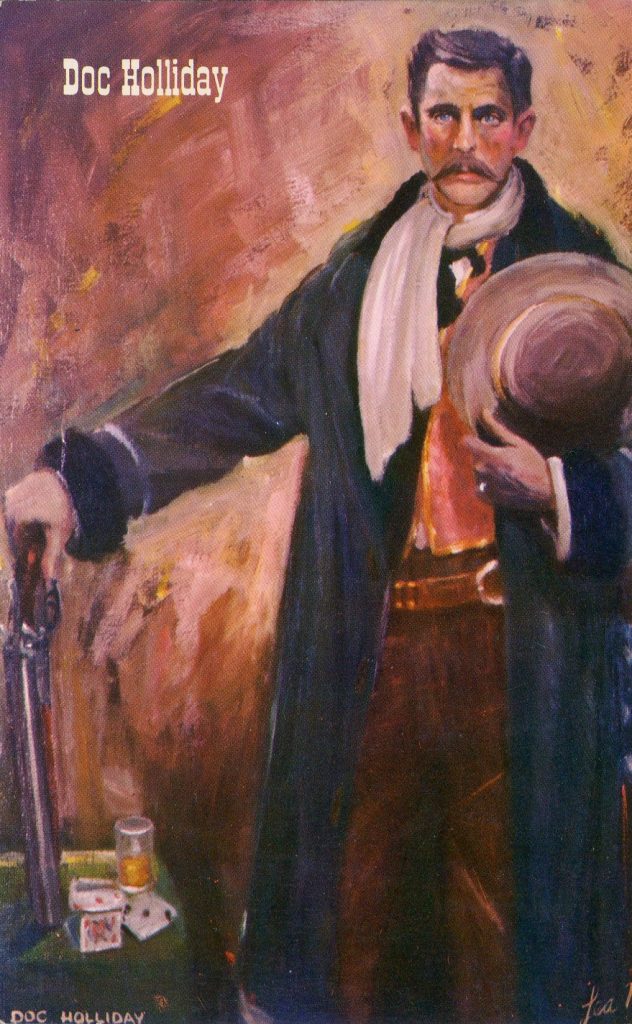 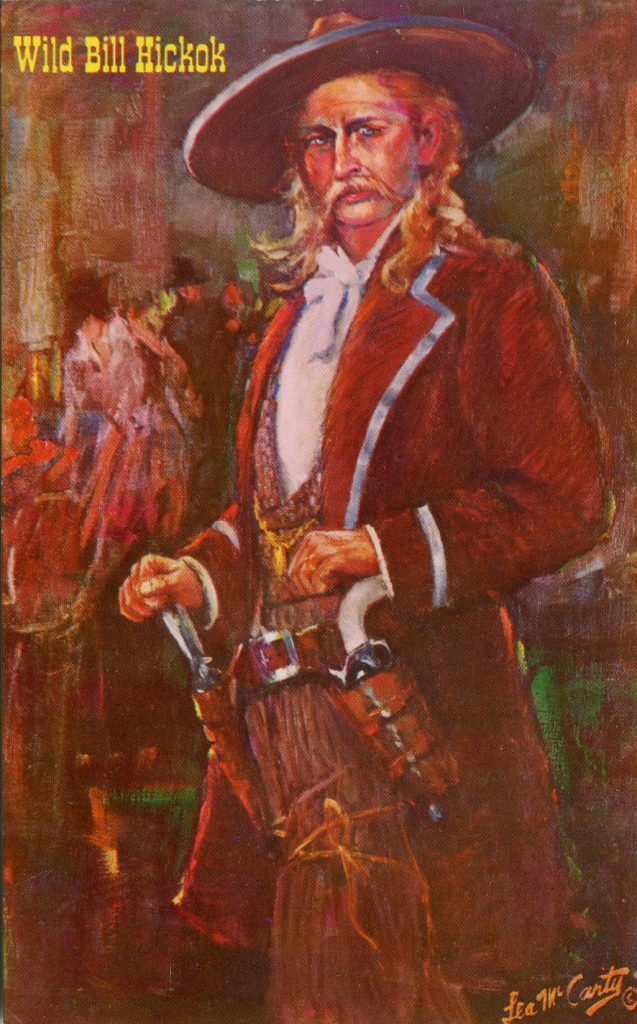 Wild Bill Hickok. This famous lawman became a colorful figure. He was shot in the back at Deadwood, South Dakota. 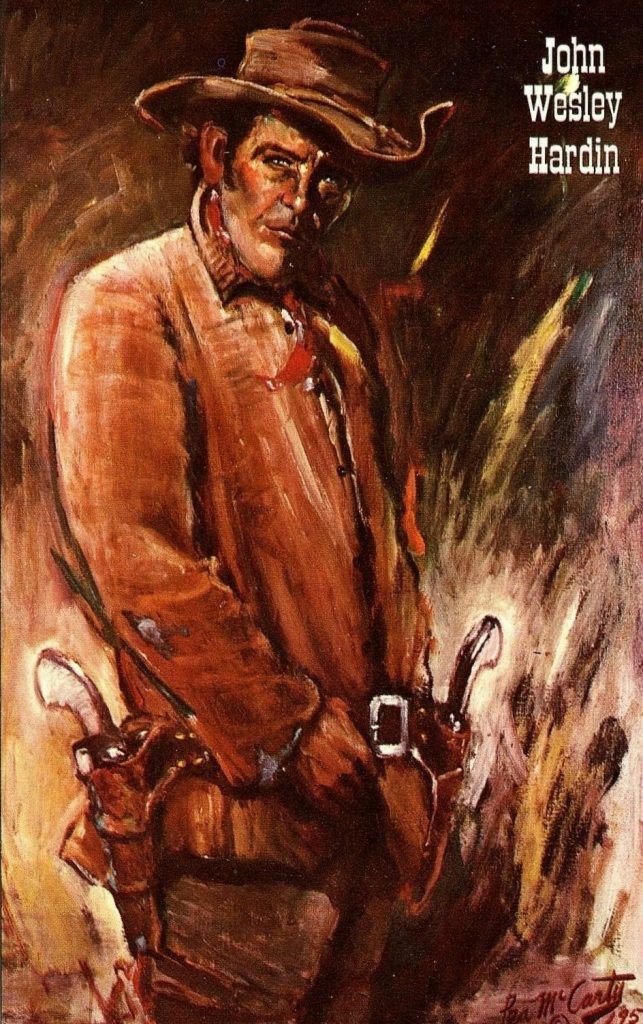 John Wesley Hardin. Born the son of a preacher but died an outlaw. By the age of 21 he killed 40 men. 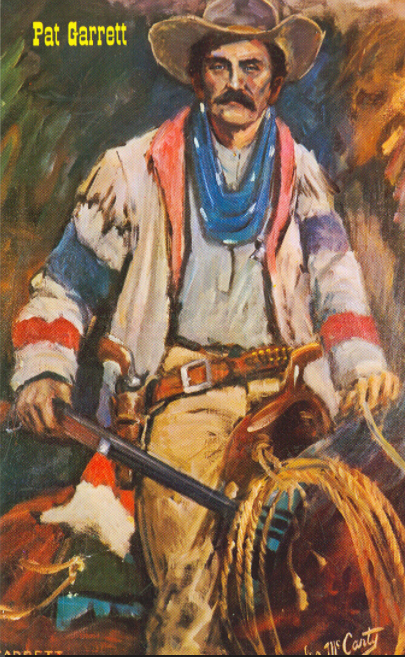 Pat Garrett. A lawman, bartender, and customs agent who became famous for killing Billy the Kid. 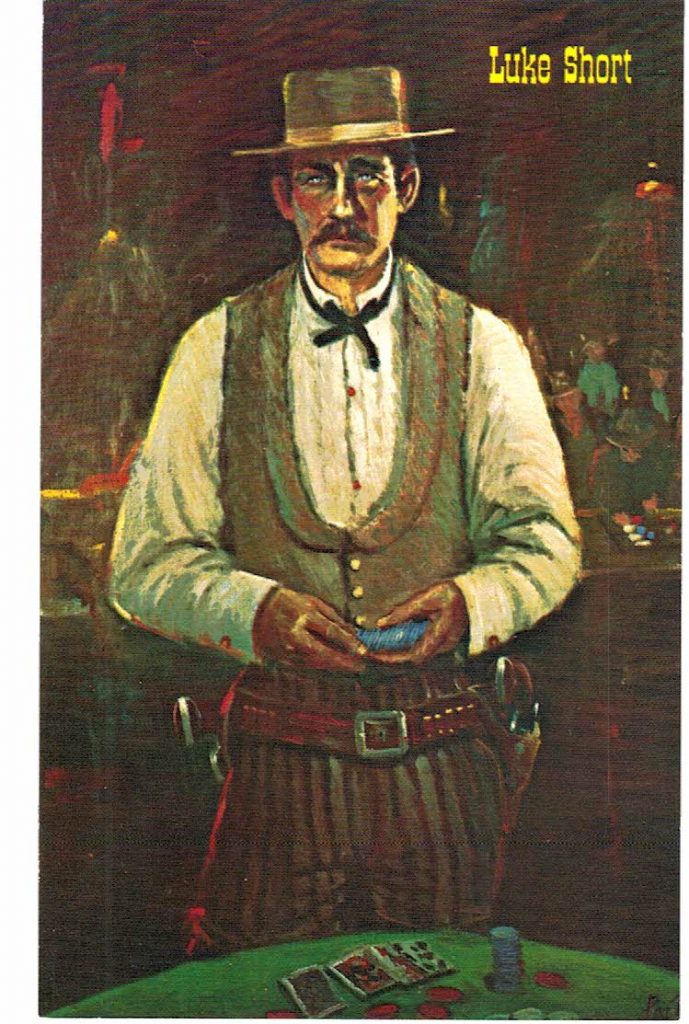 Realizing that the dates and data embedded in this article are over sixty years old, it may be interesting if our California, mid-west, or west coast readers could discover if Lea McCarty’s paintings are still on display where they were commissioned. Namely the Apple Valley Inn, Knotts Berry Farm, the city hall in Elko, Nevada, the city hall in Dodge City, Kansas, and the Tombstone (Arizona) Reclamation Commission headquarters.

Kaya Fellcheck is a retired optometrist who planned a return to her girlhood home in Vermont. Caught in the virus lockdown, she now lives in Alberta, Canada. The good folks here adopted me; I may stay.
PrevPreviousThe Church in the Wildwood
NextRobert E. Lee, a Gallery of an aging manNext
6 Comments
Oldest
Newest Most Voted
Inline Feedbacks
View all comments
Nelda Harris

This article rings my chimes. As a youngster I read a book called “The Blue Bandits” about kids using their imaginations in northern CA where one girl lived in a house reputed to have been a hideaway for
Murrietta. The author was Lucile Morrison. I was able to borrow a copy from the Sacramento public library. Anyhow I won’t bore you with more but just say this was very interesting to see the artwork and imagine some of those things myself.

I remember a commercial for a Time-Life Books series on the Old West in which the narrator informed viewers that John Wesley Hardin was “so mean he once shot a man just for snoring too loud.”

Dime novels and postcards like these helped to glamorize a history that is often violent and cruel to Native Americans. I would not collect these.

What a pleasant surprise to see your description of my father.Lea McCarty. I am the youngest of his 2 sons – Michael (73) and Willard (76t). I remember traveling through the West with my Dad and Mom (Dale) every year, my father searching for history and clues, Nevada, Wyoming, Colorado, Utah, New Mexico, Arizona and Texas. He was a gifted “gabber”, charming, educated, and a musicin as well. He was hard to resist and that was a magic ticket to selling his Gunfighter series of paintings. $15,000 to $20,000 was the asking price, and that is what the paintings sold… Read more »

Did your dad paint small versions of these paintings? As I have two – Ben Thompson and Harry Longley —