If Mr. Morris was Your Neighbor,
you never needed a match

The discovery of fire happened before memory began. The ancients had fire and knew how to use it. That took eons to learn, but one lesson about fire was that keeping fire was not as easy as using it. Maintaining an ample supply of fuel – usually wood – was challenging work. And at times – usually because of the weather – keeping a watchful eye on a fire was tedious and tiresome. These simple facts are basic to the story of a 150 year-old fire that once burned in a small cabin in western North Carolina. 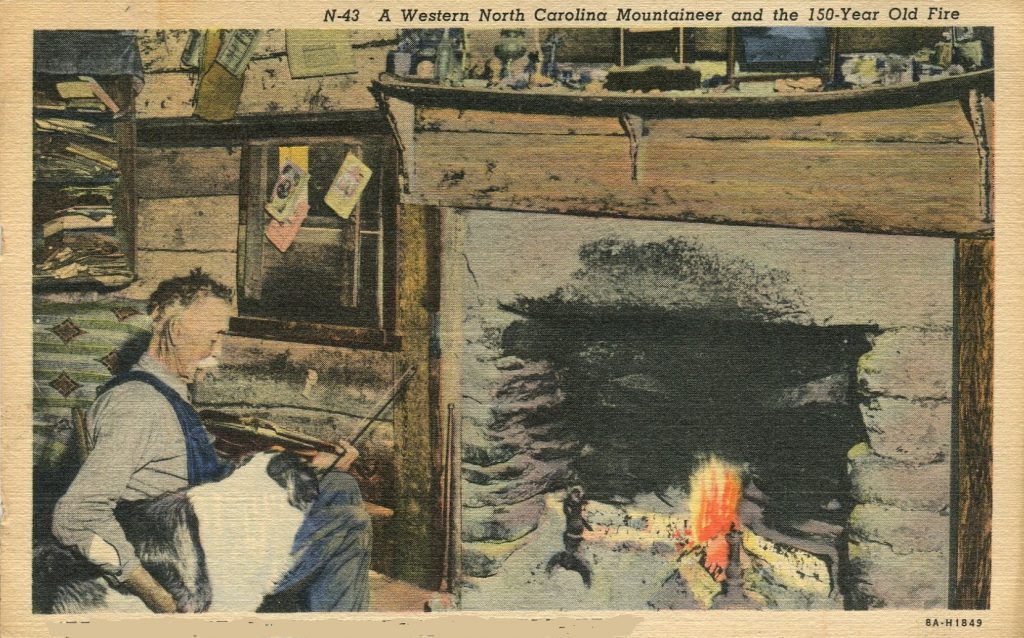 William Morris with his fiddle and his dog, Booker T.,

Robert Morris left his home in Pennsylvania in 1780 – about the same time that the United States was getting started. He went south but stopped short in a village named Saluda, just a few miles south of Ashville. He married, built a home for his family, and planted some crops. He started a fire in his new hearth, and it burned for the next century and a half. (Actually, somewhat longer.) It is unclear why, but once Robert had a blaze, he vowed never again, would he be without it.

Robert and the next three generations of his family lived their lives in that cabin and later in another larger home when his family expanded beyond the cabin’s capacity.

In the mid-1930s, after his 75th birthday, old Bill Morris (Robert’s great grandson) started telling some of his family secrets. Bill had always been a solitary man, he never married, but he had a great secret to tell and it was time to tell it. Never being the friendly sort, Bill decided that keeping his secret in the family would be best. He told his nephew and two nieces.

That was fine for a time, but when he told his story to a neighbor, the whisper-down-the-lane machine went berserk. Many of his tales amused his neighbors, other stories made them mad, but there was one of his tales that people simply would not believe. Bill vowed that the fire in the hearth of his family home had been burning for 150 years.

Bill told the story with a straight face and since the Morris family had been in the hills around Henderson County for generations, they openly laughed at the story, but they knew Bill would never tell a lie. Perhaps, they thought, he was just remembering it wrong.

By 1937 the town folk had a collective change-of-mind. Bill’s story had appeared in newspapers nationwide, thanks to the Associated Press, literally from Florida to Washington state. The family fire became so famous that Billy was asked to appear on a national radio show out of New York City.

A local from Saluda saw to Billy’s trip to New York for his radio interview. He talked a few minutes and played his fiddle. He made more friends in that hour than he had in his lifetime.

The interview was transcribed. Billy carried a copy with him for the rest of his life. It read,

“I live alone in a little log cabin back in the hills of Saluda, North Carolina. I’ve got a little piece of ground, a cow, four pigs and a horse. My fire has to be handled with real skill and care. I cover it with ashes and during the day there’s a softly glowing brand resting on a bed of red-hot ashes, and it doesn’t give off a bit of smoke.

“After the chores are done at night, I come and stir up the fire ’til it’s a blazing, and then I sit down before it … and I can see in the flames my mother and father, my grandparents and my great-grandparents who started it burning. Sometimes I sit with my old fiddle and play to it.”

Then Morris played Bonaparte’s Retreat to a national listening audience. Lola Ward, back in Saluda remembered hearing the radio that Sunday night. Lola later remembered that night to a reporter, “The whole family and neighbors all gathered around to hear the show,” she said.

“I lived farther out Holbert Cove Road than Morris and passed his house on my way to everywhere. He was a peculiar, old bachelor who wore overalls all the time and played a good old-time fiddle. The dog would bark while he played. My Daddy would stop by his house on the way to town. Old Bill would throw his foot up on the wagon and talk for a half-hour and when my Daddy came home it was the same thing over again.

“Old Billy was a good fiddler. I’d stop just to hear him play. It would tickle him to death, and he would start laughing.

“Uncle Billy, lots of people called him Uncle Billy, he loaned people fire whenever their fire burnt out. People drove miles just to see the century-old fire. In his later years, it tickled him to death to see them come up his road. He would talk to them for hours, not like it was when he was young. He was just an old mountaineer. He loved that old fire and always kept his fiddle tuned.

“The dog slept at the foot of his bed. The dog followed him everywhere.”

“We were Uncle Billy’s closest neighbors.

“He would bank that fire at night or if he went somewhere. We loved to hear him play his fiddle. In his last years, on Saturdays and Sundays the road would be full of people to see the fire. He kept a flat little box with a slit in the top of it. People would give him money and bring him things.

“Uncle Billy really enjoyed his last years, I wondered if it made him wish that he had told his story a lot earlier.”

In 1944 Billy Morris died and was buried at the Friendship Baptist Church Cemetery. 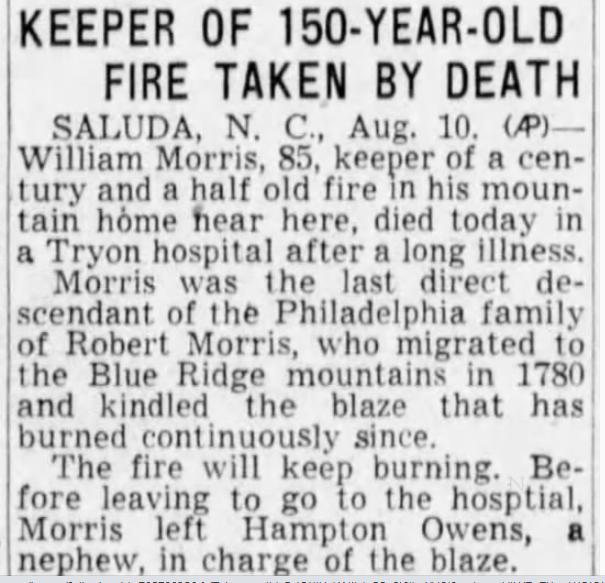 Billy’s niece, Ida Owens and her husband, Hampton, took over the fire. The locals say it was only a short time after Hampton’s death that the fire was allowed to go out.

It is known that the National Park Service considered buying the hearth and moving it out of Billy’s cabin to a nearby park as a tourist attraction. That plan failed for the fire had already been taken into the care of Hamp Owens. Mr. Owens died in 1948.

Owens renamed the fire after the village. For a long time after the 1940s many who knew about the Saluda Fire had hopes that someone had borrowed some of it or   someone who Billy loaned fire to still has it burning – somewhere!

If those wishes are true, it would be time for a new postcard.

The Staff of Postcard History offers this article for your enjoyment. It is a combined effort of many: our publisher, editor, webmaster and collectors/contributors far and wide. Please use the COMMENTS feature below to let us know how we're doing.
PrevPreviousPostcard History Quiz Answers
NextPeter Wolf Toth and His Trail of Whispering GiantsNext
3 Comments
Oldest
Newest Most Voted
Inline Feedbacks
View all comments
John

Thinking about the effort to keep a fire burning reminds me of the saying, “children would be fitter if you had to chop wood to power the television.” The Morris family seems to have found long life and fitness in tending the fire.

Very interesting! Thanks for this story.

Wish I could have seen the fire as I listened to Mr. Morris talk and play his fiddle.