and His Trail of Whispering Giants

While Toth was born in Hungary in 1947, his family left there during the anti-Soviet uprising of 1956 and eventually settled in Akron, Ohio. In 1971 at age 24, Toth carved a statue of a native American (locally dubbed “the scarfaced Indian”) into a sandstone cliff in La Jolla, California. In 1972 he began a personal project to honor Native Americans by placing a statue in every state of the U. S. and at least two Canadian provinces, Manitoba and Ontario. All these sculptures have been carved from local wood. 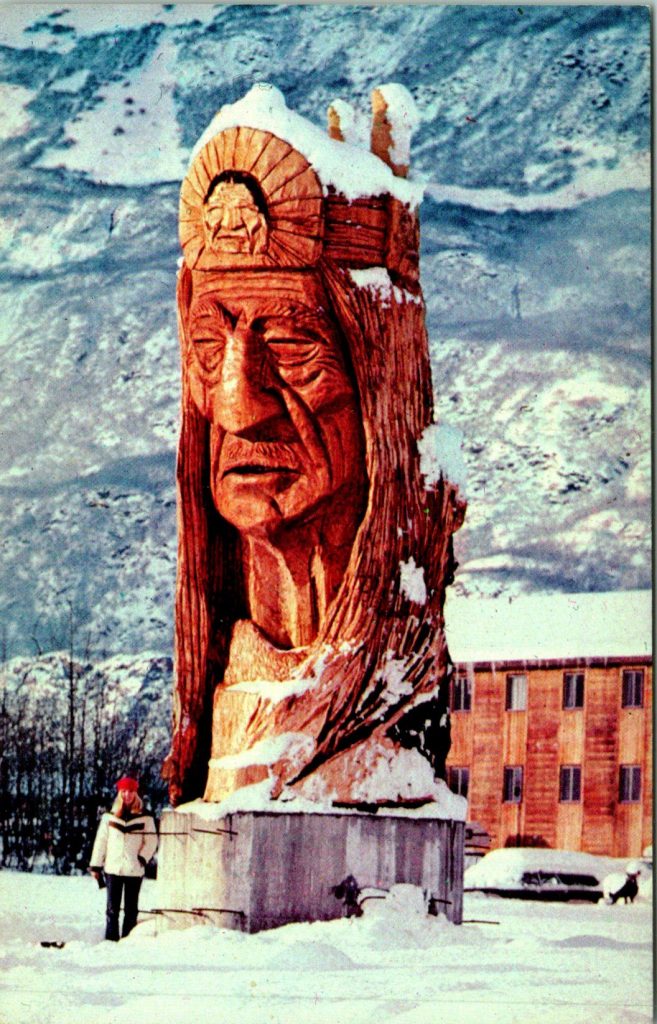 Toth donates the statues to communities willing to place them in appropriate places and does not charge for his work. Most of the statues stand no less than 20 feet high, with some towering 50 feet. Each is carved from a single log and is hand-chiseled (no power tools).

Toth has described his approach to the statues this way: “[It] is my concept of the Indians of this area. I study the Indians of the area, then visualize an Indian within the log. It is a composite of all the native people of the state.”

In designing the statues, he consults with local natives.

Toth now maintains a studio in Edgewater, Florida where he produces small pieces to support himself and raise funds for future statues. Because the statues are made from wood, many have been damaged by storms, rot, termites, and winds. He has replaced several of them. 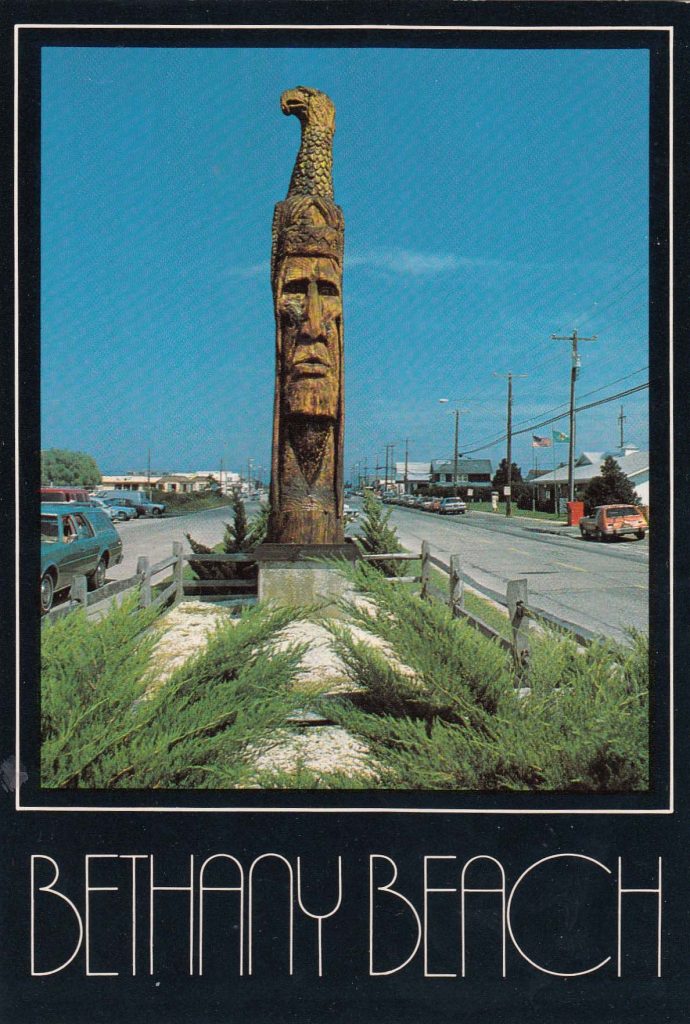 As an example, the Delaware statue was dedicated in Bethany Beach in 1976. Later damaged by termites and destroyed by high winds, only a commemorative sign remains at that site. A replacement, not done by Toth, rotted and was removed in 2000.

Toth created an entirely new statue, made from a Pacific Northwest red cedar, and dedicated it in July 2002 at a different location in Bethany Beach. It still stands.

Toth appears not to keep track of his statues, leaving that to the local communities in which the statues were placed. Consequently, several of them have disappeared, including his first statue in La Jolla. He does, however, travel to repair or even replace his sculptures.

David Schumaker, an inquisitive traveler, has assembled a database (with photos) http://dcschumaker.com/statues.htm of the fifty-seven statues he was able to find standing during personal travels. His list contains others that he has not seen, most likely because they have been lost or cannot be found in the community where originally placed.

Toth also sculpted a “Whispering Giant” statue of Stephen I in his home country of Hungary in 2008. It is located along the Danube River in Délegyháza, Hungary.

Many of Toth’s statues are found on postcards, and those that are, have been published by an assortment of local publishers.  The illustrations in this article are from postcards I have bought on auction sites and, if you look hard enough, at postcard shows.

A six-minute video of a 2017 interview of Toth at his Edgewater, Florida studio is on Youtube: https://www.youtube.com/watch?v=5e8CPptR08U.

Bill Burton began collecting Ossining, New York postcards when he lived in that Hudson Valley town. His collection expanded, of course, to include his college, the neighboring towns, and places where he and his wife traveled. In retirement, he's refocused on Delaware and the DelMarVa peninsula towns, but he’s just as likely to be found parked in front of the 25¢ boxes at shows.
PrevPreviousIf Mr. Morris was Your Neighbor, you never needed a match
Next“Matchmaker, Matchmaker, Make me a match.”Next
6 Comments
Oldest
Newest Most Voted
Inline Feedbacks
View all comments
Jim Sens

I’ve only seen two of Mr. Toth’s carvings. The first one was in Fort Lauderdale, FL and the second one a little closer to home in Bath or maybe Stow Ohio. Both were breath takingly beautiful.

I see the Peter Toth sculpture in Bethany Beach every year, but didn’t know the history behind it. Thanks for sharing! ❤️

I’m in Indiana, not particularly close to Vincennes, but I’ll look for Toth’s sculpture if I ever find myself in that town.

Bill, If you have any means for getting a hold of David Schumaker, I’d be forever grateful Your article is great and I’m preparing a podcast on this, but need some critical input from David who I am trying to reach. If you know a contact e-mail (other than “info@dschumaker.com”) please let me know at AmaztingTalesCT@gmail.com. Thanks! – Mike Allen

I have just uploaded a video to Youtube my dad filmed in 1990 when peter “wolf” toth carved a statue in my city in Williamsport Pennsylvania. The city held a ceremony for the statue, Peter spoke a bit as well as an Indian Chief, and other city officials. The video is 30 mins long if you would like to watch it before you do your podcast.

The title of the Youtube video is – Ceremony for Chief Woapalanne Statue By Peter “Wolf” Toth at Brandon Park October 14, 1990

In 1990 Peter “Wolf” Toth carved a statue of Chief Woapalanne in my city of Williamsport, Pennsylvania. I was 11 years old at the time. My dad filmed the ceremony at Brandon park. Peter talked a bit as well as an Indian Chief, the mayor, and other city officials and they had orchestral music and a band and alot of people were there. I remember it as being a big deal at the time, The statue was a huge 24 foot tall. In 2015 they took the statue down due to rot and termites but they restored it and relocated… Read more »