A Postcard Test of Organization

As a collection gets larger it becomes harder to place individual cards with their topical peers so they can be enjoyed and found quickly in a search. Finding subgroups is an art and each collector comes to it differently.

Wanting to better organize my cards during the long days of this pandemic I came to this dilemma. If nothing else, my background in textiles led me to reflect on costumes and styles seen on postcards. I did not have to think long for ones that most charmed me, both good and bad; and let’s not forget, the ugly. 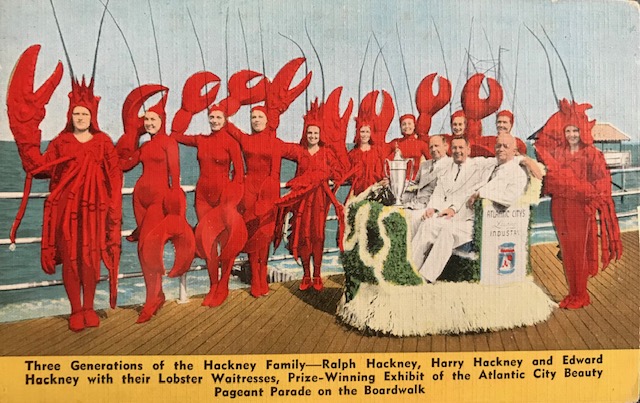 Three Generations of the Hackney Family

There’s Ralph on the left holding the trophy

Of the Hackney cards, the hardest to find is this outdoor card with three generations of Hackneys.

Outstanding but outlandish advertising cards that you may have passed over more than once are those of the lobster waitresses of Hackney’s Restaurant in Atlantic City, New Jersey. This seafood establishment opened in 1912 and seated 3,200 customers. The restaurant advertised with a full complement of postcards, some showing exterior views on the boardwalk featuring the company’s multi-generation ownership and others of the interior, extolling their lobster tanks.

The most intriguing lobsters of Hackney’s Restaurant were the ten boardwalk beauties in head-to-toe lobster costumes. These striking figures were an award-winning ensemble of the late 1930s with female employees posed during the Miss America bathing beauty pageant. Alas, years ago I contacted a Hackney family member and was disheartened to learn that the costumes had vanished with the ages.

The Atlantic City boardwalk was established in 1870 as a means to limit the amount of sand being dragged from the beach into hotels and restaurants. By 1884 taffy (candy) and the two-seater wicker chairs propelled by their male walking cabbies added fun to the beach activities throughout the season. Elegantly decked out, the chairs were dressed as floats during pageant week. 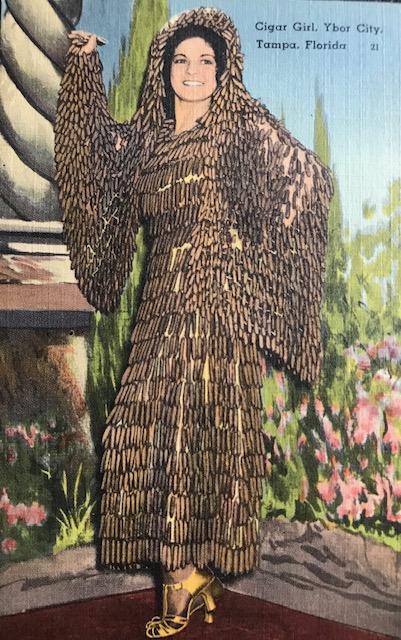 Meet the Cigar Girl of Ybor City, Tampa, Florida, published as a linen postcard. As costumes go, this one defies most rules of couture until a little background information is revealed. This woman is sporting an ankle length dress and head covering laced with rows of cigars.

Ybor City district has a history of cigar production going back to the late 19th century when cigar makers Vincente Martinez-Ybor and Ignacio Haya moved their Key West manufacturing plant to land being developed east of the growing city of Tampa. In its heyday Ybor and the surrounding communities had 140 cigar factories producing 250 million cigars a year.

As a tribute to a cigar capital this costume makes perfect sense . . . regardless of how out of fashion it is. 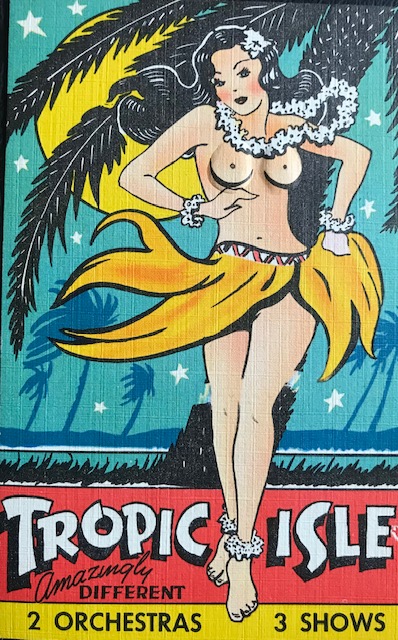 A linen novelty card with an illustration of a Hawaiian dancer advertises the Tropic Isle Restaurant in New York City. Exotic in form, this scantily clad hula dancer wears a grass skirt, but no top. Her bodice is embossed making this a three-dimensional postcard and a unique one at that. It is also a costly card and somewhat scarce. Variations of this card employ assorted colored backgrounds and copies have been identified as having neither color nor the exceptional add-on embossing. 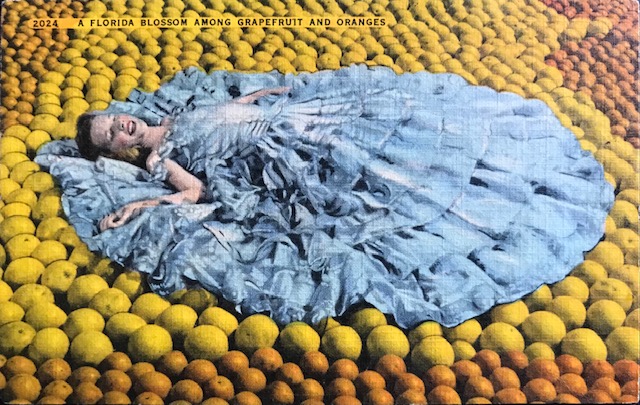 A Florida Blossom Among Grapefruit and Oranges

This unusual card is one found in my early days of searching for linen postcards. Dressed in blue chiffon and staged with oranges and grapefruits surrounding a bird’s-eye view of this debutante, you almost wonder where she is lying on top of grapefruit. Glamorous, it is quite an original pose and not akin to other glamour cards.

Fashion, food, advertising, linen, or just plain oddities? Where are they placed? I know, I’ll create my own topics!

Susan Hack-Lane is a lifelong collector of one thing or another. Susan came to postcards when she first spotted them on a trip to Brugge where street vendors along the canal displayed rows of boxes with European cards. After three purchases she began seriously collecting others in the US with the same passion. As a dealer she specializes in vintage and modern illustrated postcards and books. Susan resides in New York state.
PrevPreviousThe First and Last House
NextAllow Me to Introduce Rene ClokeNext
9 Comments
Oldest
Newest Most Voted
Inline Feedbacks
View all comments
burgie dave

When bathing beauties became a secondary interest category in soon enveloped all female subjects. Whether foreign or domestic publication or card era my gatherings cover everything pre-1970. Have never overacted on how to place this assembly in my four pocket album pages. Women is the title and holds over 500 keepers. Keeping it simple works for me.

Very interesting selection of cards, Susan! I look forward to seeing more of your collection in future articles.

Wonderful cards and article Susan. I have never seen before today the NYC Tropic Isle restaurant postcard despite decades of collecting NYC cards. Thank you.

A quick bit of fun to see some pretty and (unusual to me) (cigar costume) ads. Check our some of the Texas celebrations for more with NPCW friends in May

Love the Tropic Isle one. The illustration looks like the ones you see in contemporary comic books.

Jordan Peterson needs to be collaged onto the Lobster card image.

Great Article ! Just stumbled upon it !