Sunday Afternoon at the Historical Society

A man walked into the historical society last Sunday and asked, “What’s new?”

Everyone laughed. Not at the questioner nor his question, but the look on his face when I pointed to a box of postcards that had been donated just an hour ago.

When the lady who donated the postcards arrived unannounced, she apologized by saying, “I found this box under my grandmother’s bed; it’s full of old postcards. Can I donate them to you? Some of them go back to the 1940s.”

A strange look came over her face, I suspect because my reply didn’t answer her question more so than the fact that my attempt to be funny failed.

I recovered the situation by saying, “Yes, you have come to the right place.”

She smiled, handed the box to me – it was much heavier than imagined – and before she left refused my offer of a Deed of Gift.

An examination to learn how quickly I would deal with the contents produced seven cards that were totally outside the mission of our society. I dropped a $20 bill in the petty-cash drawer and brought them home. All perfectly legal.

Here are a few that may interest Postcard History’s readers.

A Loving Message to Daughter Josephine 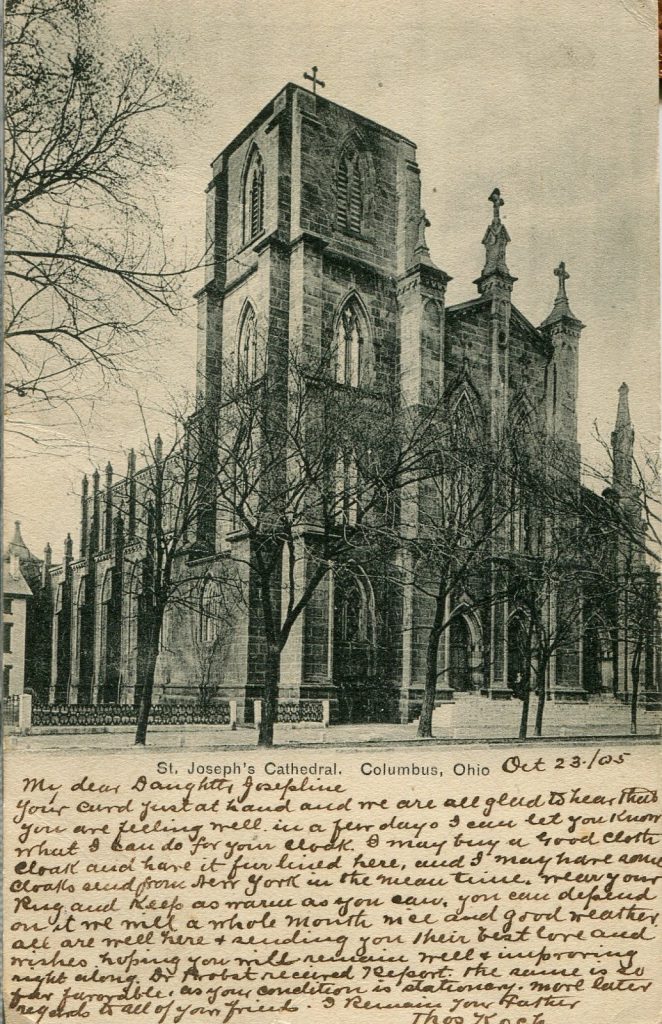 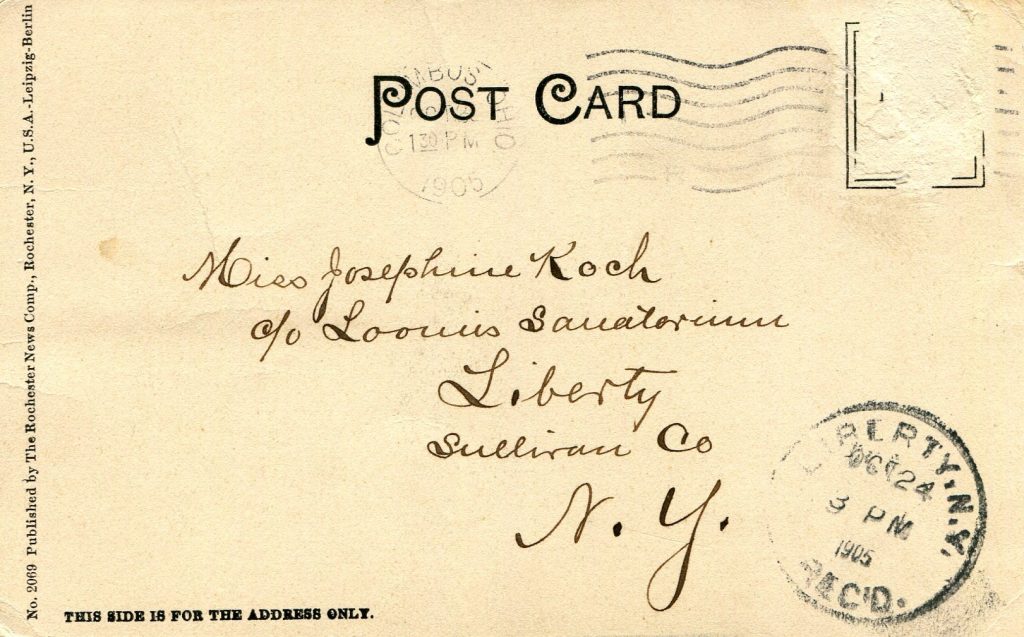 It was the tiny penmanship on this card that caught my attention. Addressed to Miss Josephine Koch, in care of the Loomus Sanatorium in Liberty, Sullivan County, New York, the service this card received, literally puts the USPS to total, unadulterated shame.

In twenty-five and one half hours the card was sent from Columbus, Ohio, to Liberty, New York, a distance of 550 miles. Check the postmarks.

The penmanship is that of Josephine’s father, Thomas. Thomas Koch was a hatter in Columbus, Ohio, who immagrated in 1857 at age 14, with his parents, Peter and Sophie. Thomas was the second of thirteen children.

Thomas married Katherine “Kate” Voeller and had seven children. Peter, Frank, and Edward joined the hat buisness, Matilda was a teacher, Alfred was a carriage builder, and Richard owned a successful real estate agency. Sadly Josephine was their sickly sister. She died of Pulmonary Tuberculosis in 1908 at age 31.

If you grew-up or live in the Pacific Northwest, it may be safe to assume you know what a log-raft is, and perhaps you may have seen one. But, if you’re an East Coast guy like me, join the cadre of we who are totally uninformed about timber harvesting on our country’s west-coast. 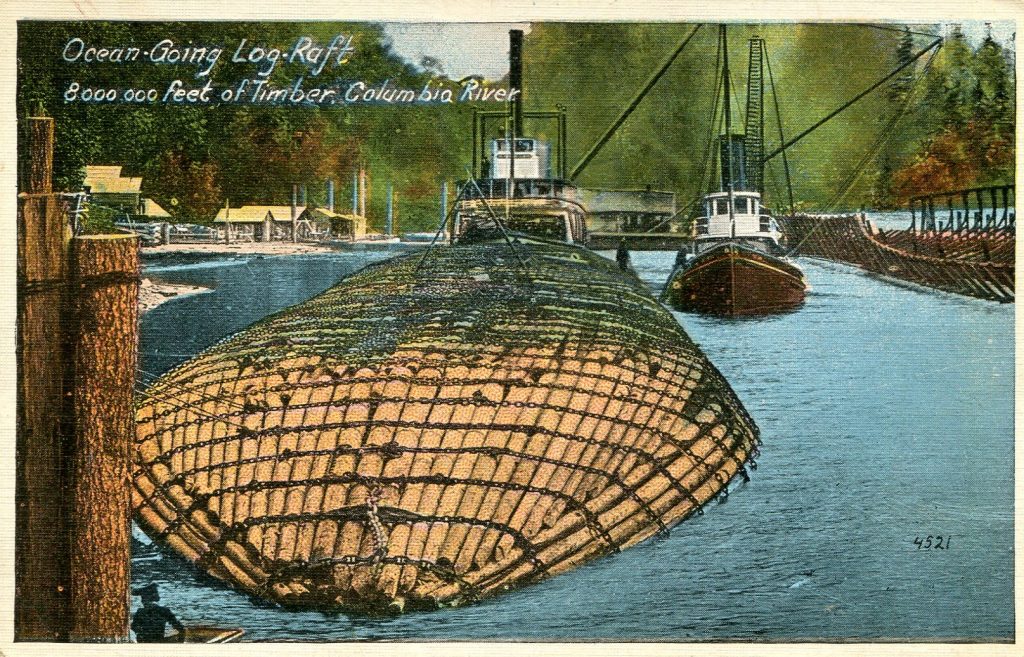 If you care to check my count, I see 35 logs forming the bow of this ocean-going log raft. Some heavy reading helped me learn that the typical timber raft measured from 700 to 1000 feet long, 50 feet wide and 30 feet deep. Each one took between two and four months to build. These cubic measurements suggest that eight million board-feet of timber were packaged, using two-miles of timber chains, to get newly felled logs to west coast saw-mills. 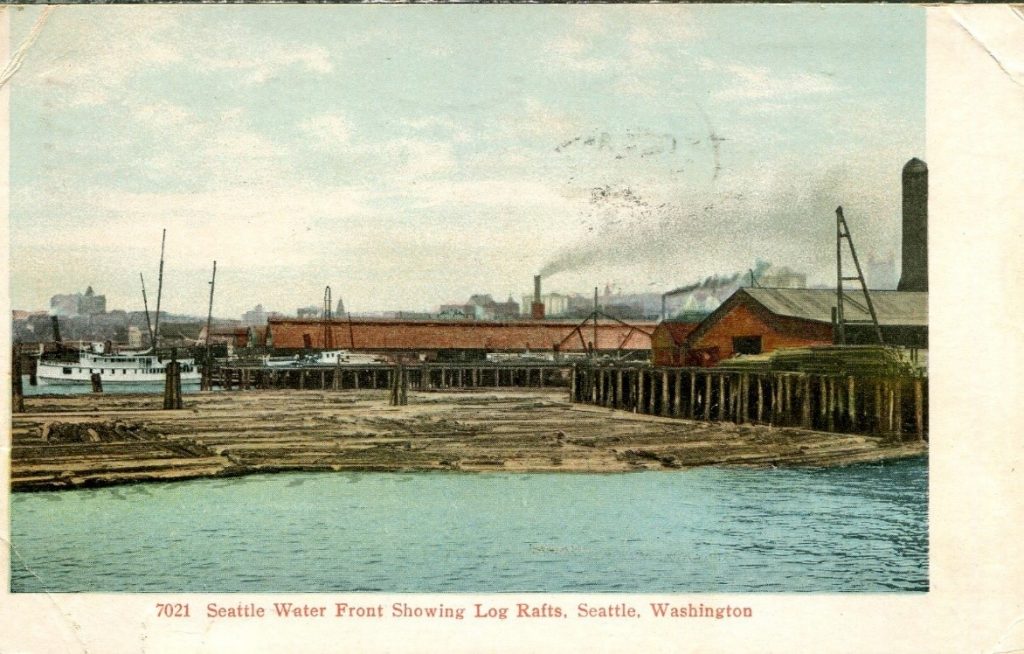 The first two attempts were failures. The first attempt at rafting timber to market was for the Robinson Rafting Company in 1894. After leaving the mouth of the Columbia River and at sea for only thirty miles, it broke apart and scattered logs along a twenty-five mile stretch of Oregon coast line.

John A. Fastabend was the mastermind behind these projects. He tried again in 1895, but ultimately the result was the same. The second attempt was about the same size as the first, but used better and more chains. It was towed this time and stayed in one piece until just before its destination.

Fastabend’s third attempt (in 1897) was a success. The raft finished its journey in San Francisco harbor and commanded excellent profits – almost enough to repay the losses from the first two failures.

Fastabend retired in 1941 with a success rate of 96.6%. He supervised 120 voyages. Only four of his rafts were lost to fire or storm. One of the fires occurred in 1941 just 70 miles northwest of the Golden Gate. It was estimated that 7,000,000 board feet of lumber burned – enough to build approximately one-thousand, 1200 square feet houses.

Anthropologists have concluded that cavemen chewed gum. What they chewed was certainly much different than what we know today as chewing gum, but the idea was the same.

The first American gum factory was opened in Maine in the 1850s. In the three decades that followed, when gum was extremely popular among many Americans, other businessmen also opened gum factories. One was William Wrigley, who opened his company in Chicago by making Juicy Fruit and Spearmint in 1893. The market remained strong and confectioners added sugar-sweetened or fruit flavored gums to their line of products. In 1908 still another company was formed in Boston to manufacture a similar product, but this time with a twist – anticeptic or “germ free” gum.

The Common Sense Gum Company constructed a corporate building at the end of Third Street in Newport, Rhode Island, and opened for business in 1912 to produce Listerated Gum. 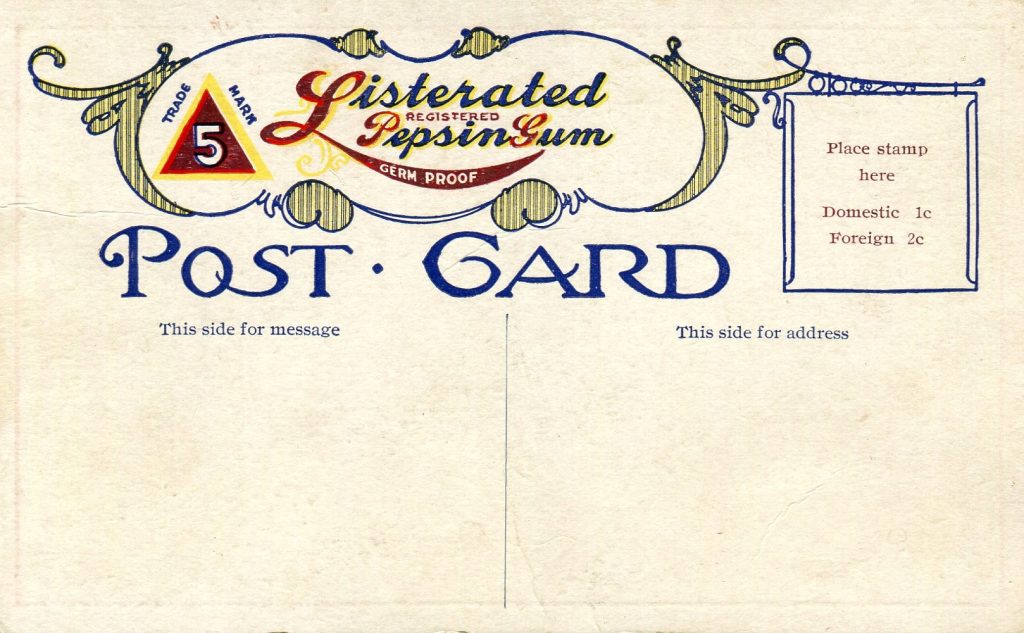 Much of this history centers on an individual named Louis P. Larson. City directories from the era confirm that a chewing gum factory was located at 168 N. Third Street, but that address apparently has changed since that 1932 publication.

Larson, who was born in Nebraska, appeared in the Federal Census Population Schedules after 1900 – twice in Chicago and once in Newport, Rhode Island.

Postcard and magazine advertising were apparently successful for Larson. His “germ-proof” gum was popular and sold well above expectation, especially among members of the military. The gum contained pepsin, a digestive enzyme. Frequently soldiers complained that gun-smoke caused nausea. The pepsin in the gum alleviated the discomfort.

The postcard has a divided back with an elegant POST CARD apparatus. Some scholarship suggests that the Trade Mark triangle with the enclosed “5” is actually the price tag.  There are abandoned industrial buildings on North Third Street, in Newport, where that trade mark can still be seen in the decorative brickwork.

For reasons unknown Common Sense changed its name to the Listerated Gum Corporation in 1921 and inaugurated a new product called Orbit.

From the “some-things-never-change” file, in 1925 Wrigley bought the company and the product line, in what today we would call a  “hostile-takeover” and closed it forever.

The postcard here was one piece of clever advertising. 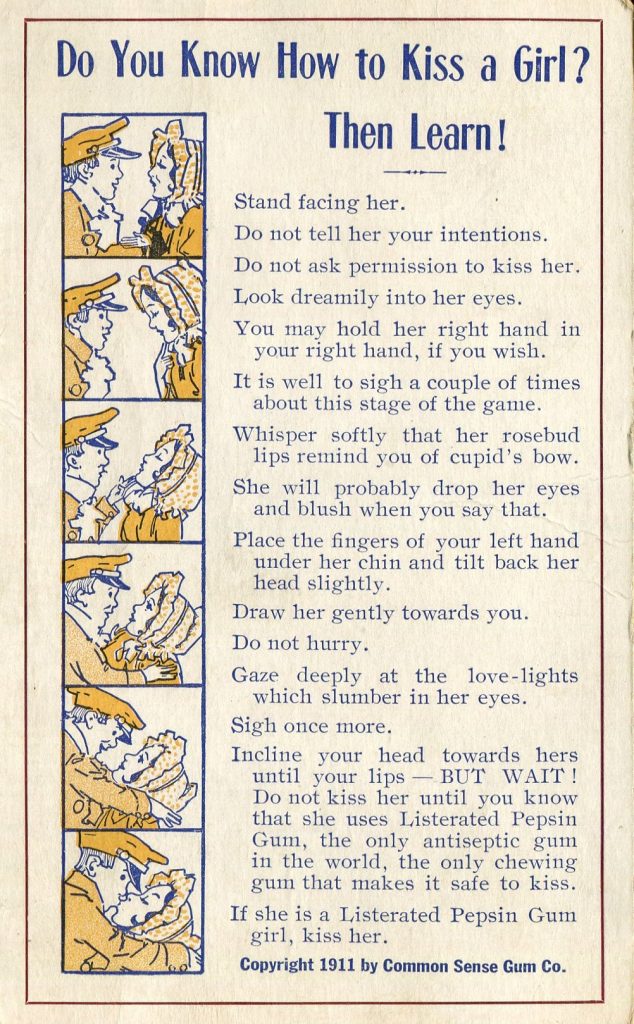 The advice is solid and easy to learn.

Ray Hahn is a retired educator, but he has never stopped teaching. His decades of researching, writing and editing a newsletter for the South Jersey Postcard Club has been a world-class education in trivia. In addition to postcard collecting, Ray’s other interests include history, genealogy, and touring the world with his wife Marie. Ray often advises his readers to "Join me as we explore the world one postcard at a time." Ray and Marie live in New Jersey.
PrevPreviousThe American Theatre Wing – Stage Door Canteen Postcards
NextThe First and Last HouseNext
4 Comments
Oldest
Newest Most Voted
Inline Feedbacks
View all comments
Hal Ottaway

Thanks for the selection. Exciting and very interesting slices of Americana. I enjoyed each one of the short stories!!

There’s always an interesting story to be gleaned from a postcard!

My grandmother worked in the Chiclet factory in Brooklyn before she married my grandfather.