New York, London, and Paris. Three cities where American servicemen could find a few hours entertainment and relaxation at the Stage Door Canteen while on-leave from their duties throughout World War II.

It all started in New York City, where on March 2, 1942, the stage actress Nedda Harrigan gathered a few friends, who were members of The Wing, (the short form of how members of the American Theatre Wing referred to themselves) for a few hours of fun meant to entertain members (mostly enlistees or draftees) of the American military.

The American Theatre Wing is known today as the organization that sponsors the Antoinette Perry (Tony) Award for Excellence in Broadway Theatre. They are “theatre people” who organized a quarter-century before as the Stage Women’s War Relief for World War 1 – a military morale support group.

Commonly called the Stage Door Canteen, they operated seven nights a week in the then unoccupied 44th Street Theatre in Manhattan. No one knows for sure, but newspaper accounts of the time suggest that attendance on opening night exceeded 1,200 soldiers, sailors, and marines.

The New York Herald Tribune reported that those in uniform were wearing their “ticket.” Everyone was welcome. More than 200 actresses, clad in red, white, and blue striped aprons welcomed every guest. Also, on duty that night were at least 75 very recognizable actors working as busboys.

Another in attendance was Barney Tobey, a free-lance cartoonist whose reputation as a gentle humorous at The New Yorker spread to new levels in the war years.  We have the postcards to prove it! 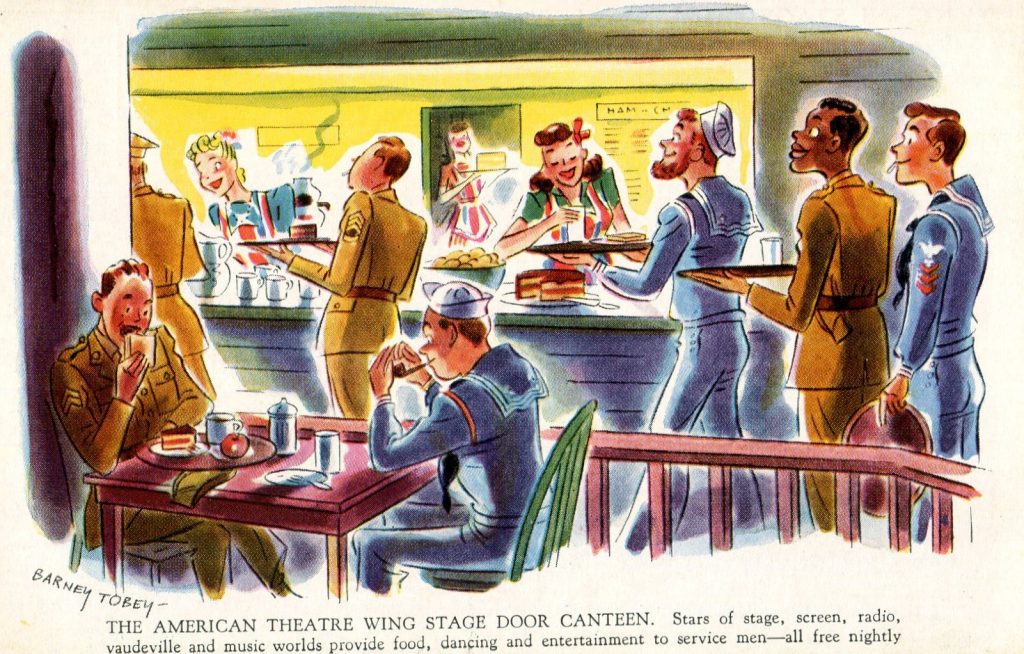 Tobey was the son of a Russian immigrant who sold twine and paper from a pushcart until he had enough to open his own store. The shop was immediately successful because Barney’s father Nathan had papered the walls with his son’s drawings. Customers came in droves, as much to see Barney’s cartoons, as they did to buy stationery.

More often than not, Tobey’s cartoon ideas came from his own experience. One of his most famous was published after he and his wife attended an outdoor concert in Paris. Apparently the mosquitoes were rather bothersome that night since Tobey drew the maestro substituting a fly-swatter for his baton.

Tobey never retired. He died at 82 and by then The New Yorker had published more than 1200 cartoons with his by-line; four of which appeared on the magazine’s cover. 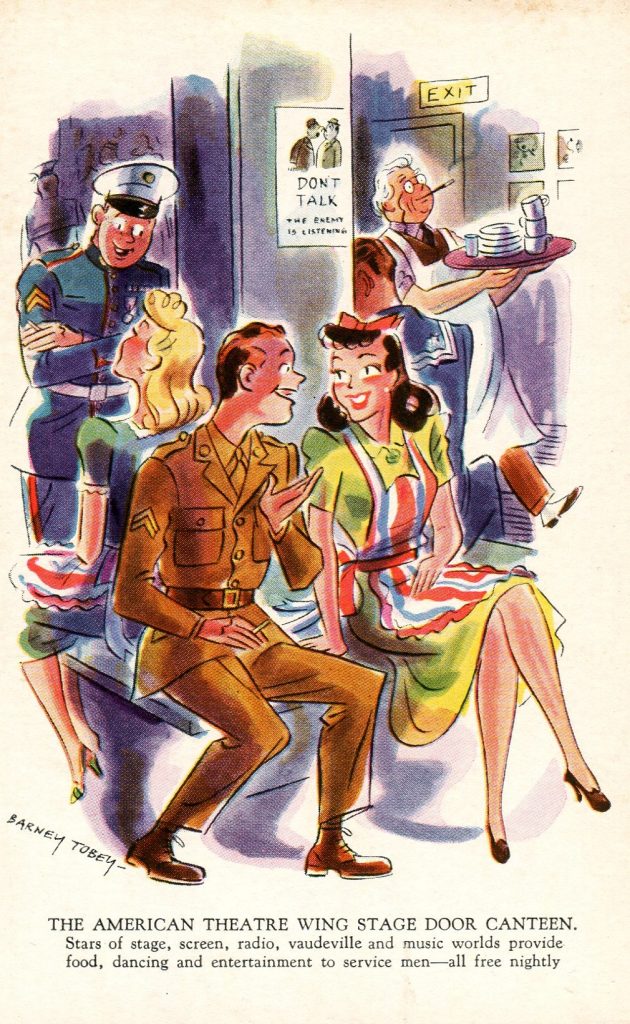 Tobey’s cartoon of a late-night scene at the Canteen, features a baby-faced Army Corporal talking to an apron clad, wide-eyed brunette, a Marine in a Class-A uniform being mesmerized by a blushing blond, seated apparently by the kitchen door, as a very sophisticated busboy takes coffee cups and saucers to some guests who need just one more cuppa-joe!

During a typical night at the canteen in November 1942, dinner was served free of charge to everyone in uniform from 5 p.m. to mid-night. Those gathered drank more than 200 gallons of coffee and smoked over 250 packs of cigarettes. There were two shows, one at 8 o’clock, another at 22:30. (Yes, military time was used when announcing show performances.) There was dancing after midnight and during the breaks in the music, most hostesses helped “the boys” write letters home. 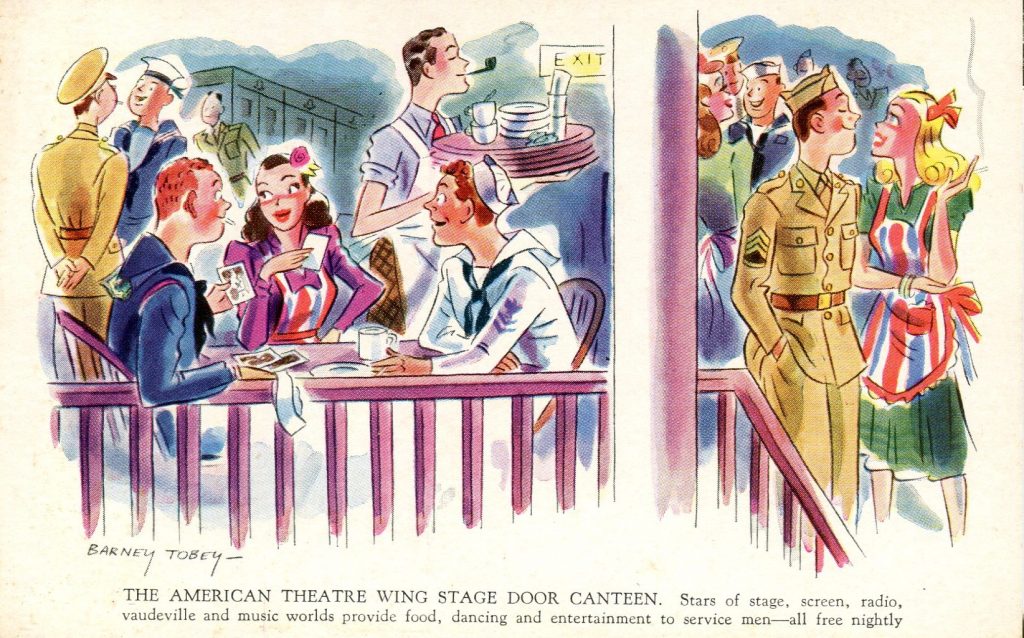 Tobey’s staff sergeant who seems to have captured the attention of the blushing blond, seems a tad too young to be wearing a non-com rank, that usually takes at least three years of service to achieve. But he has done his best to forget about the Army for a couple hours; the look on his face tells us he has simply fallen-in-love.

The work done by The Wing members at their Stage Door Canteen was soon taken-up by hundreds of volunteers in cities far from Broadway. A radio program was the most popular spin-off. Produced by the Columbia Broadcasting System from 1942 to 1945, audiences numbering in the millions listened each Thursday night at 9:30 (Eastern War Time) and were entertained by actors, comedians, musicians, and actresses whose names they knew from shows and movies.

There was also a film. This is the Army was produced in Hollywood in 1943. One scene from the film took place at the Canteen in New York. In that scene came the song, “I Left My Heart at the Stage Door Canteen.” One source suggests that it “speaks of the fleeting love that many of the men felt when they had to leave the canteen, never to see these beautiful women again.”

So, who paid for all this? Throughout the war years, uncanny amounts of money were raised or received as donations and sponsorships. The caption on the featured card (above) states that the CORN PRODUCTS REFINING COMPANY, makers of Kayo syrup, Mazola salad oil, Linit starch and Kre-mel dessert sponsored, at least in part, the Stage Door Canteen.

Smile! If you remember any of these products.

The Staff of Postcard History offers this article for your enjoyment. It is a combined effort of many: our publisher, editor, webmaster and collectors/contributors far and wide. Please use the COMMENTS feature below to let us know how we're doing.
PrevPreviousThe American Dream – Own Your Home
NextSunday Afternoon at the Historical SocietyNext
4 Comments
Oldest
Newest Most Voted
Inline Feedbacks
View all comments
Hal Ottaway

Happy to learn about the artist and his Dad who had the store with his son’s cartoons decorating the store walls. I would like to go and see that also. Great postcards. Thanks for your research and sharing these with us.

Karo (not Kayo) syrup is still being made. It’s named for the town of Cairo, Georgia. Mazola is also still around, as is Linit, although Kre-Mel appears to have faded into obscurity.

I always enjoy the articles, but even more so when the postcards are ones I’ve seen or had.

Thank you for sharing this interesting postcard history, or more generally, American history.