The American Dream
Own Your Home

In the 1960s and ‘70s, the world of real estate was much different. (There! How’s that for an understatement?) If you decided to buy a home, your state, county, or city often determined, how different!

If you were fortunate and able to save a down payment, which those of a certain age will remember was between twenty to thirty percent of the asking price, you had three choices.

Certainly not the most economical was to find a real estate agent who may or may not take a real interest in your plight to leave your parent’s home or to get out of that small apartment you rented for $90 per month. The agent would ask you what you wanted, but that was troublesome, since you really didn’t know what you wanted or how much you could afford. The agent would say, “Let’s take a ride,” and he would drive you straight to the most expensive house in his listings.

Another option was to drive-around and hunt down FOR SALE signs. If you found someplace that looked like home, you called the number. Yes, the telephone number at the bottom of the sign. This frequently led you back to step one, but without a choice of an agent.

The third option was to register with a contractor. At the time in question there were two or three in every neighborhood. There were different types: the independent guy who would build anything you asked for, but it would take months, or the small company with two masons, six carpenters, three plumbers and a landscaper on the payroll, and there were the large, custom home builders, if you agreed to the three or four models they offered.

The custom home builders were often the ones speculating with large tracks-of-land bought from a retired farmer. The moneyman and perhaps several partners decided to develop an area into a plastic community of strangers with nothing in common but their mortgages.

Thousands of families moved to Levittown type communities in those decades. Many of them learned about Whispering Heights, Seven Hills, The Dunes, or some other cleverly named ticky-tack residences from a postcard they found in their mailbox.

Here are some examples.

In Massachusetts, the Heald Home Company in Hubbardston (a residential community in Worcester County, 65 miles west of Boston) was building dozens of this ever popular, spacious yet economical raised rancher. 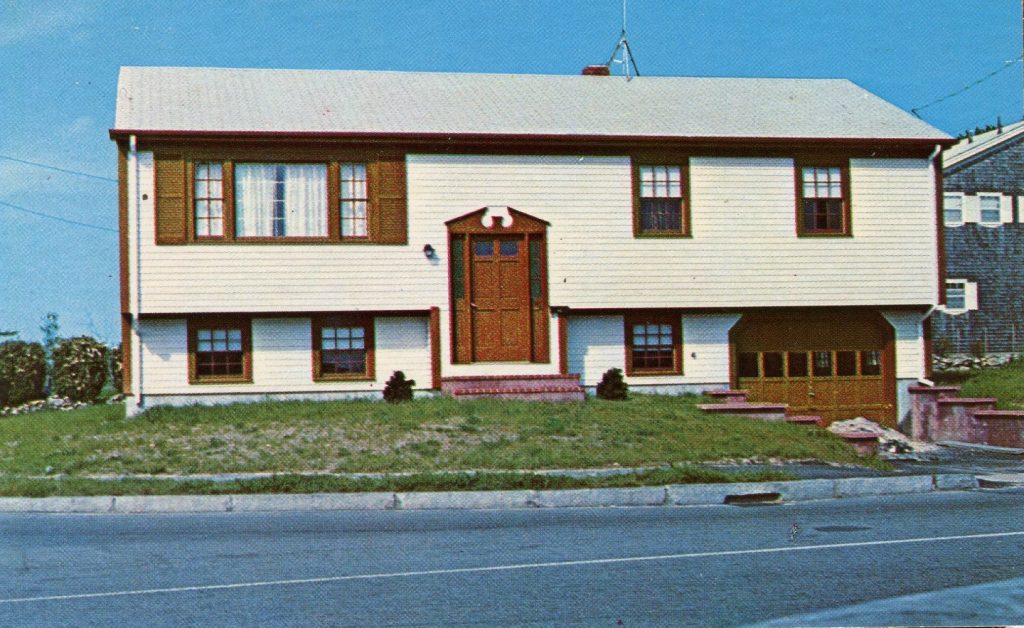 This ever popular, spacious yet economical raised ranch, 3 bedroom with garage under, provides a surprising 1,863 sq. ft. of stylish living space. Whether it’s a traditional Cape, Salt Box, Ranch, Vacation home, contemporary, or your own design, Heald will build it quickly and economically with unsurpassed quality. Write or call.

A Florida home builder, in Brevard County (central east coast, along the Indian River) offered this rancher to the newly retired. Live in complete luxury far from the work-a-day world for so little you will not miss it. 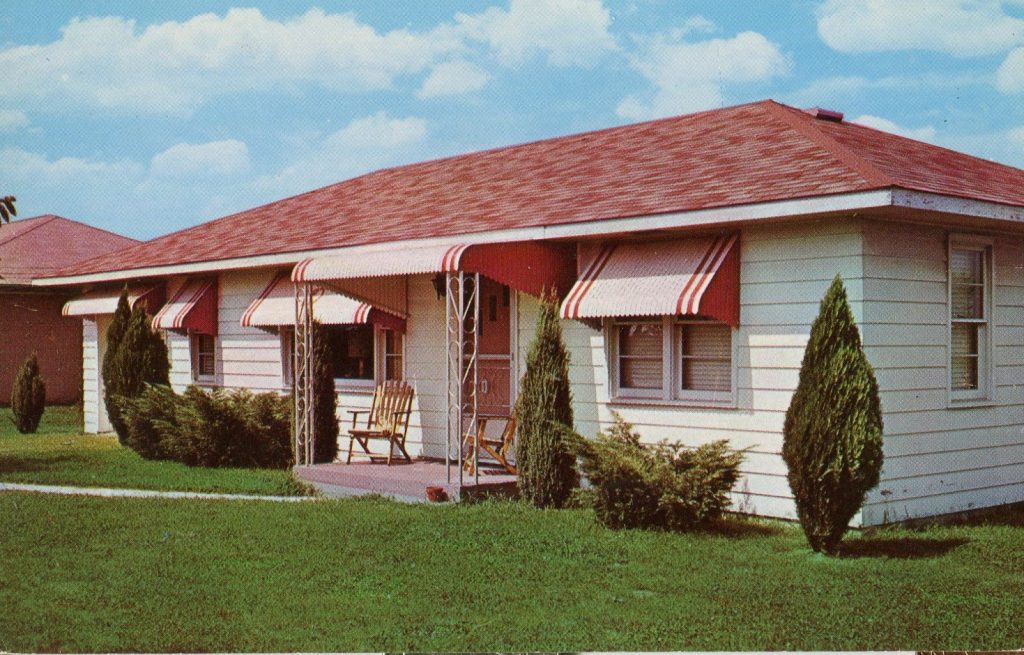 This two bedroom rancher can be yours for a small downpayment (sic) and monthly payments of only $103.50. With Herbert’s All Aluminum awnings, only $2 more. Construction promised within 120 days. Over 975 sq. feet of luxurious living space. Starting at $33,995.

Virginia, never hampered by the onslaught of new residents, claims the choice of 303 communities in the Washington, D. C., suburbs. New home construction in the 1960s and ’70s was happening on every other corner. The Adam and Alair Homes, Company claimed to have a quality product at a reasonable price. Their postcard advertising campaign was quite successful. 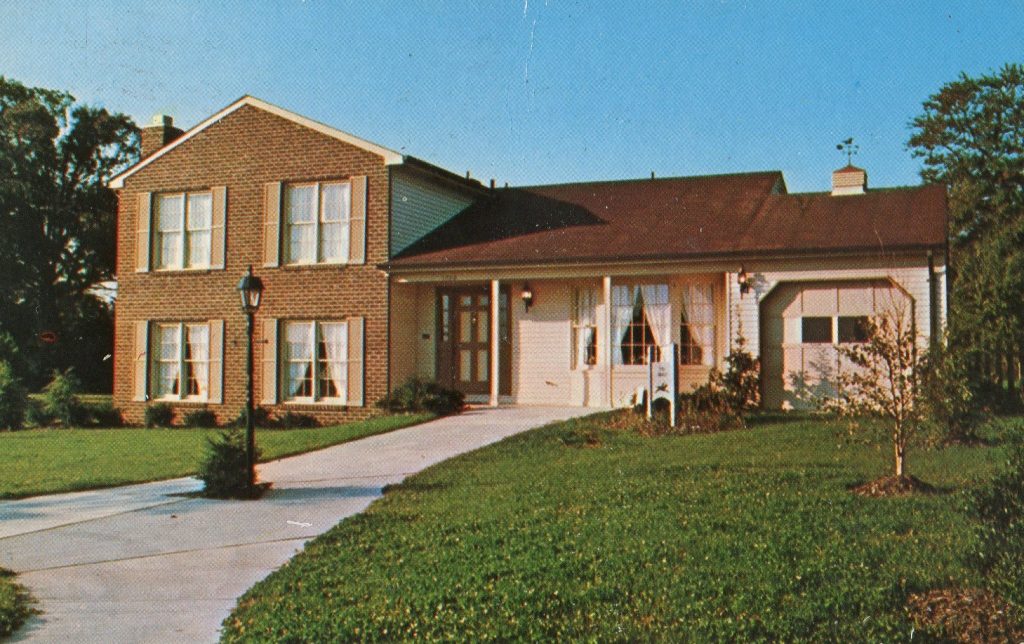 A & A Homes, inc. cordially invites you to visit our award-winning homes at Kingston Chase. A beautifully landscaped community of ramblers, split levels, and two story homes with 10 different exteriors of brick, stone, and maintenance free aluminum. Up to 5 bedrooms and 3 full baths. Homes filled with extras you don’t pay extra for. Planned pool recreation area. Come see why so many say Kingston Chase is the best buy in Fairfax County.

The caption included a suggestion to visit samples in a Community of Traditional Homes. Just take the Beltway to the Reston turnoff. The price was added by way of a rubberstamp, “FROM $49,990” 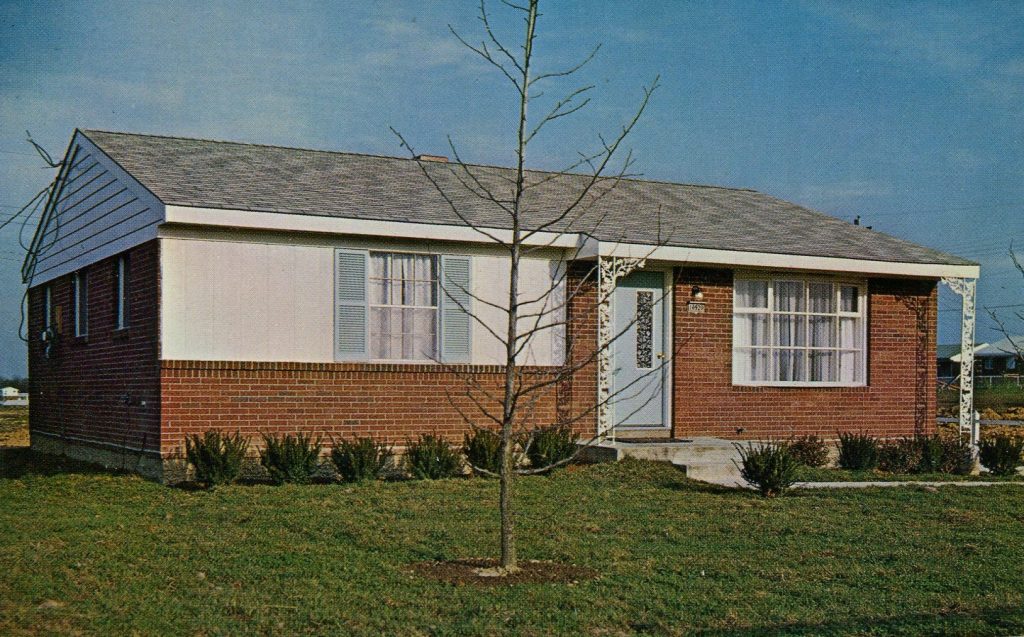 The Summit in Seven Hills Village. 3 bedrooms, tiled bath, hardwood floors, equipped kitchen, basement and garage options. Picture your family owning this beautiful ALL BRICK PEASE HOME* in Scenic SEVEN HILLS VILLAGE where we have our own park and school site, shopping and close to transportation. No Down Payment with monthly payments from $73.61. Buy this home with your rent money. Stop in or call real soon. L. C. Homes, Inc. 825-3110.

L. C. Homes, Inc., a company with a phone number 825-3110, published a postcard for at least three of their new-home models; The Summit (above), The Everest (below), and The Terrace (also below). 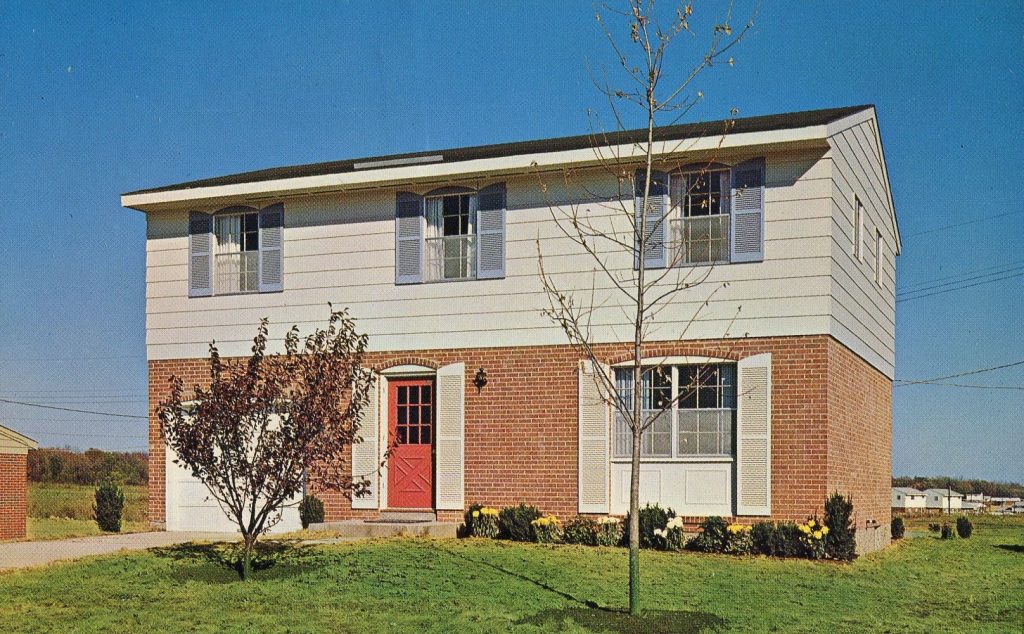 The “Everest” in Seven Hills Village, 4 bedrooms, 1½ and 2½ baths, separate dressing area, full basement & garage. Your family can enjoy owning this Beautiful BRICK home in Scenic Seven Hills Village where we have our own shopping, school site, and close to transportation. No down payment and monthly payments from $103.09. Stop in and see for yourself or call for information. L. C. Homes, Inc. 825-3110. 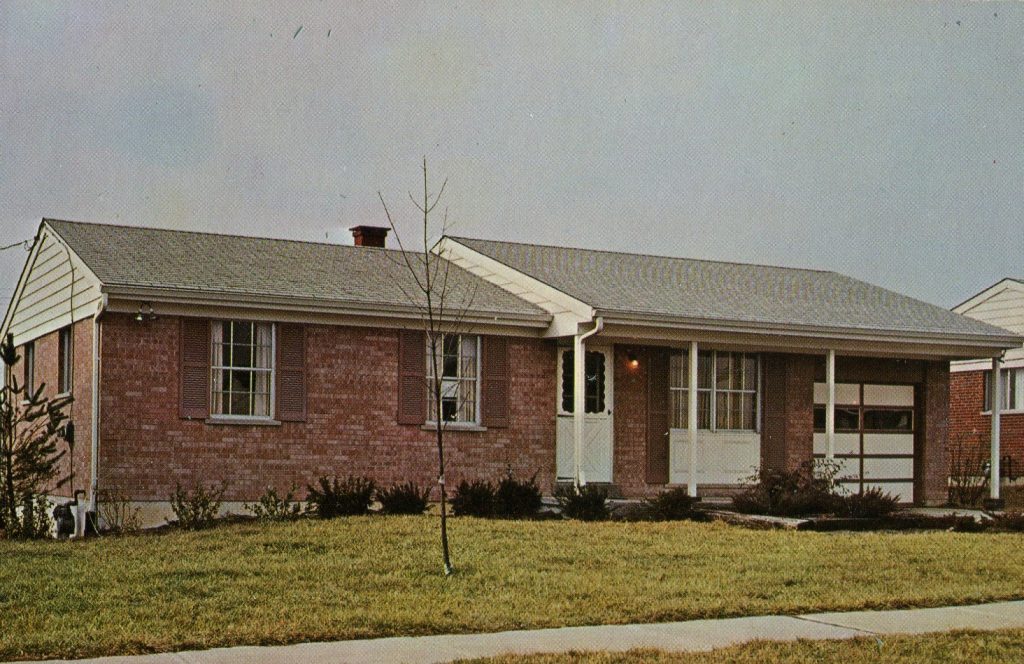 The Terrace house in Seven Hills Village, 3 bedrms, tiled bath, basement and garage. This beautiful rambling ranch can be yours in a completely new community with new school, shopping center and park site. Veterans can move in with “no down payment” and non-veterans as low as $450. Monthly payments from $87.00. Call today for a personal tour of the beautiful home. 825-3100. L. C. Homes Company.

The presentation of these cards by Postcard History is a lesson that intends no disrespect. Nevertheless, your editor begs your indulgence. History is the who, what, when, and where of everything. These postcards are making a point, but collectively they all miss one very salient fact. Sadly, there is no clue as to where Seven Hills Village is located. The company name and phone is all they tell us. No location! No address!

Two of the cards are obviously the product of the same printing concern. They are early sixties, chromes with Kodachrome photographs that are clear, crisp, and boring. The other card, manufactured by the Henry McGrew Printing, of what appears to be, K.C., MO. equals the first two. The name was learned from a logo at the bottom center of the address-side of the card but the KC, MO is printed in what is estimated to be a size 3 or smaller font, which is quite difficult to read.

* “Brick Pease” is an antique term for exterior walls of a structure protected by a brick façade. Such walls are considered maintenance free.

The Staff of Postcard History offers this article for your enjoyment. It is a combined effort of many: our publisher, editor, webmaster and collectors/contributors far and wide. Please use the COMMENTS feature below to let us know how we're doing.
PrevPreviousWorld War One Lovers
NextThe American Theatre Wing – Stage Door Canteen PostcardsNext
3 Comments
Oldest
Newest Most Voted
Inline Feedbacks
View all comments
Hal Ottaway

I liked this very much. Interesting to read about, and to remember back when our parents bought a
home, and hearing about the plusses and minuses. Nice that these homes on postcards exist. I have for years real photo views of Wichita homes, because of the postmark mostly, and then always hopeful that I might be able to identify the house and pin point the address. All a big part of postcard collecting.

Nice article. I do remember the 20% down needed to get in the front door. (Something about qualifying for a conventional loan or an FHA loan made a difference). If you want to hear a 60’s folk song talking about track houses of the era I recommend you search for “Little Boxes” by Malvina Richards. (later sung by Pete Seeger) Turn up the volume and listen to the words – this short tune has a different perspective on “The American Dream” and we the owners. Give it a listen and then look at the article again. bt

I found that there’s an LC Homes (no periods after the L and C) that’s been operating in Delaware since 1947. Louis Capano was the founder’s name.