This is the story of two Italian lovers during World War One. Their nicknames are Nino and Nina and they exchanged over 496 postcards (that I have) and multiple letters (that I do not have).  Note that all the postcards shown here were sent by either of the two lovers.

Let’s tell the story from the beginning! In the early 1990s, I purchased a collection of Italian postcards at a Baltimore postcard show. In 2000, my mother and friend transcribed the messages on those postcards. Most were dated and thus we were able to stitch together their story between 1913 and 1918. With additional research I learned more about these two people.

Nino was enrolled in the 56th regiment and then in the 54th regiment of infantry. He spent most of the war years in the area of Belluno in the Zona di Guerra (War zone). Thus, he used postcards that were franchigia (free of charge, no stamp). 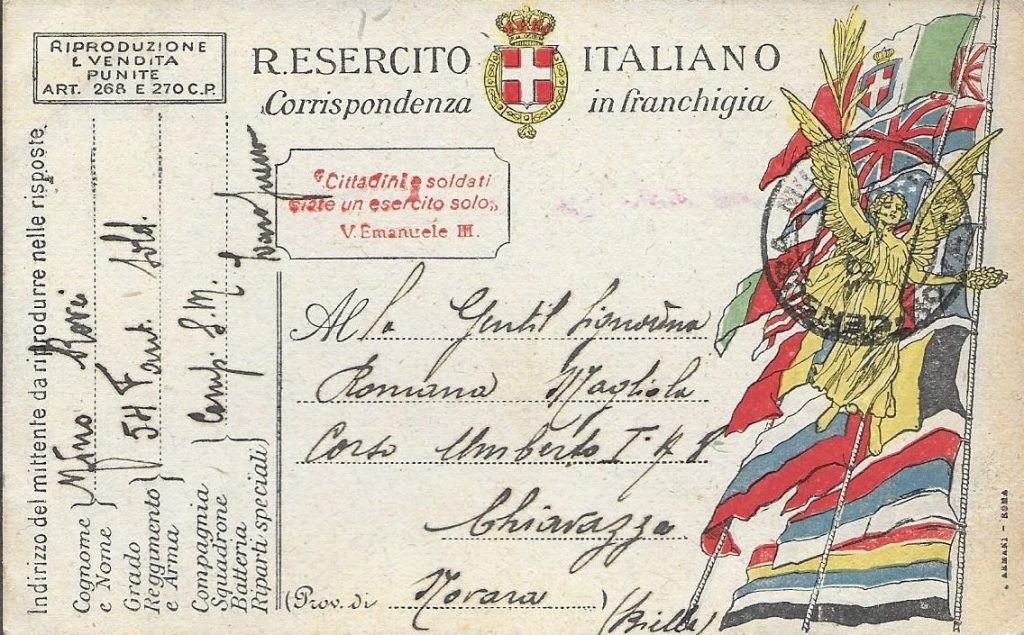 Italy’s involvement in World War One started on July 28, 1914. The goal was to obtain the cities of Trieste and Trento and surrounding areas. 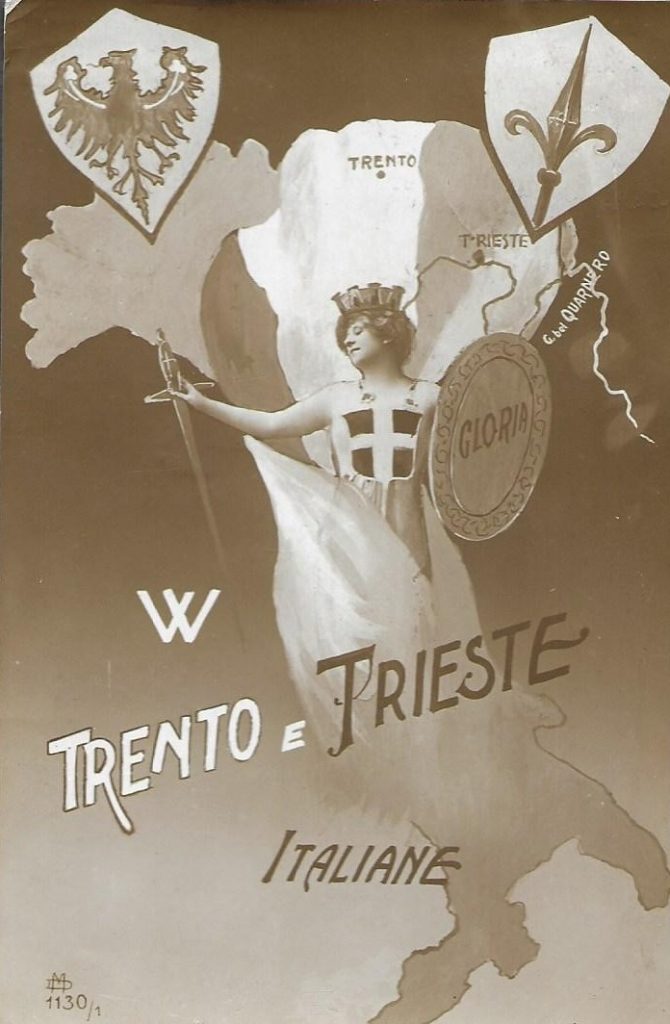 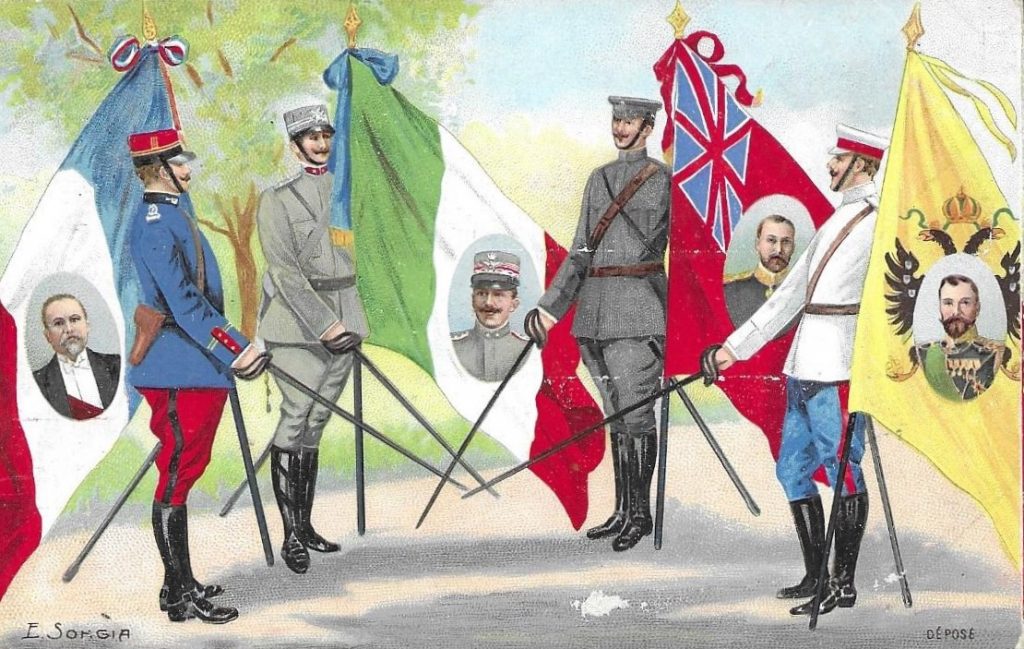 Nina was a student living with her aunt in Chiavazza, but sometimes she was in Torino starting in 1916 (university?). She was then 18 years old. Her parents were in the United States and they were asking her to join them. This was a cause of arguments between the lovers, with Nino begging her not to go. He promised that they would go together after the war.

Many of the postcards mention letters that were sent, arrived, and to be written. Unfortunately, I do not have the letters, for certain, they would give more details.

The main recurring theme on the postcards was their declaration of the love they shared. Nino was also conveying his fear of not making it out alive from the war, his hardship and how his love for her was sustaining him. He was constantly asking for her declaration of love and telling her that she was everything for him.

Nevertheless, it seems that her family did not approve their relationship, maybe because she was too young. There were constant requests from her for Nino to write to her parents to make them understand his sincere love and commitment to her. It seems that he did write the letters to the parents, but there is no record of the parent’s response. It is not clear if eventually her parents came around. Thus, they were meeting in secret on Sundays when he was home, but not always succeeding. 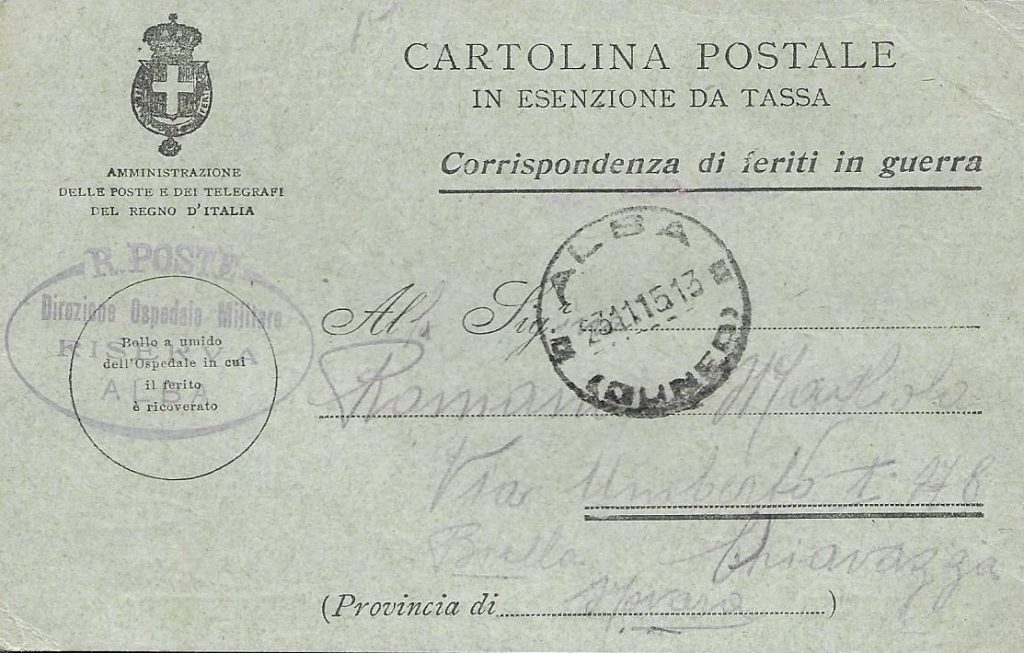 In October 1914 and again in 1915, Nino was sick, and in a hospital. This postcard has the stamp of the military hospital and was designed for the feriti in Guerra (wounded).

When he is in the war zone, his main complaint is the cold. The Italian army was bogged down in a war of trenches at high altitude in the Alps for most of the war. 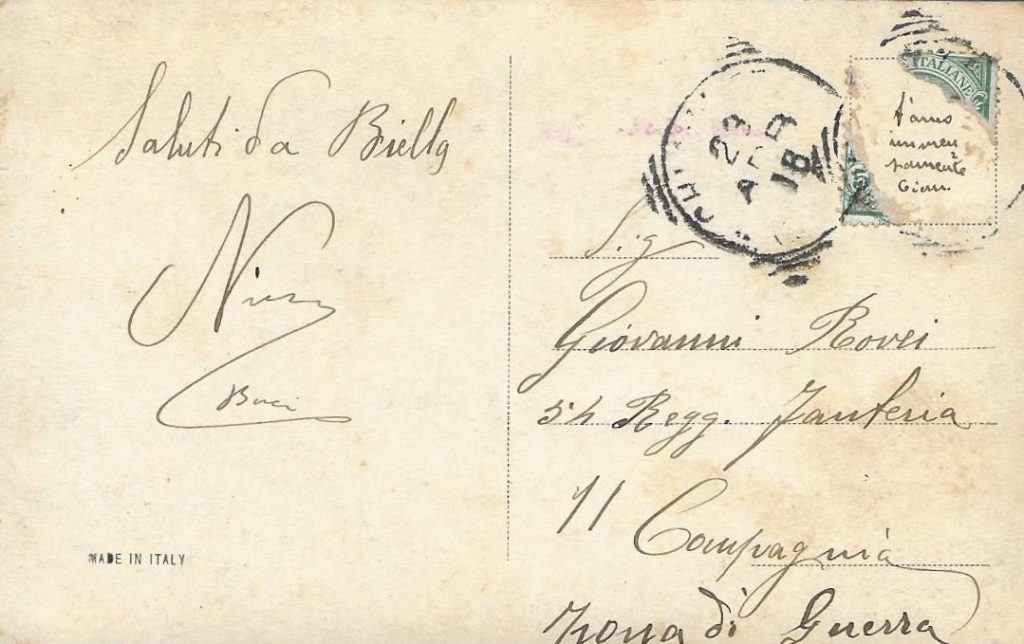 In some cases, they wrote a secret message under the stamp to avoid censures from the army and her family. I did not find messages that were that embarrassing, but it is hard to judge.

Some of the postcards are interesting for other reasons then the messages. Here are two examples.

[Editor’s note: the works of Achille Lucien Mauzan (1883 – 1952) are very collectable, and often expensive. It is quite unusual when Mauzan cards are found after being used.]

Achille Mauzan, the signed-artist of this image, was born in France, but moved to Italy in 1905. He produced over 1,000 postcards.

Some of the postcards are interesting for other reasons then the messages. Here are two examples.

[Editor’s note: the works of Achille Lucien Mauzan (1883 – 1952) are very collectable, and often expensive. It is quite unusual when Mauzan cards are found after being used.]

Achille Mauzan, the signed-artist of this image, was born in France, but moved to Italy in 1905. He produced over 1,000 postcards. 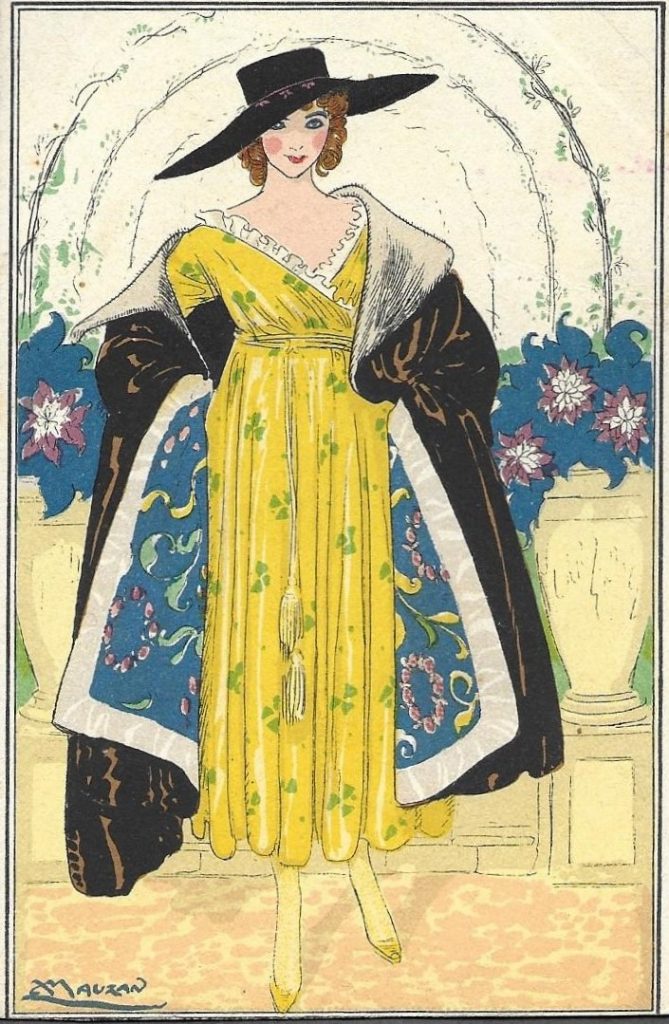 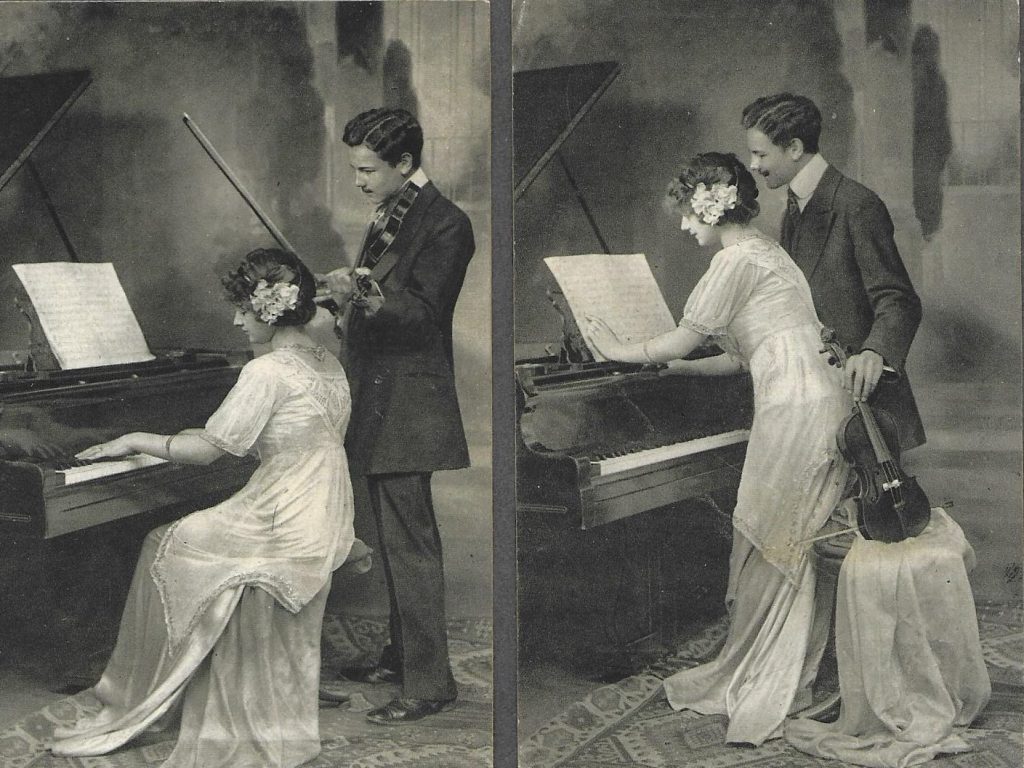 It seems that Nina was buying a series of postcards [a very popular practice in the war years] and then would send them one-by-one or write a very long message using two postcards that were then mailed in an envelope.

The last postcard mailed by Nino to Nina is addressed to New Jersey, USA and the date is October 1918. Note that he was promoted to Caporale (Corporal) from foot soldier. 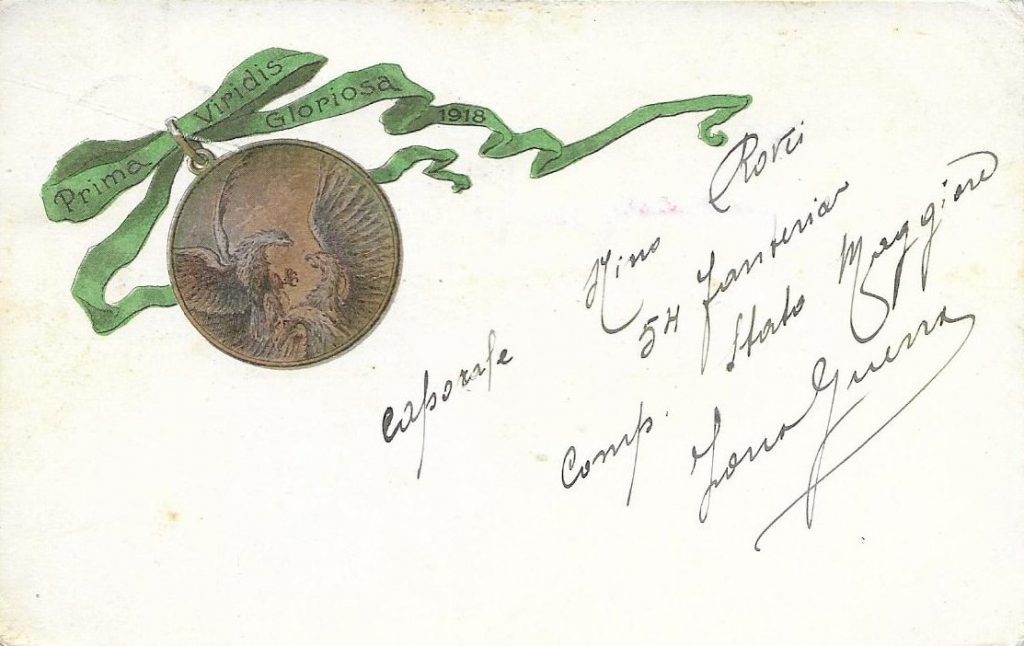 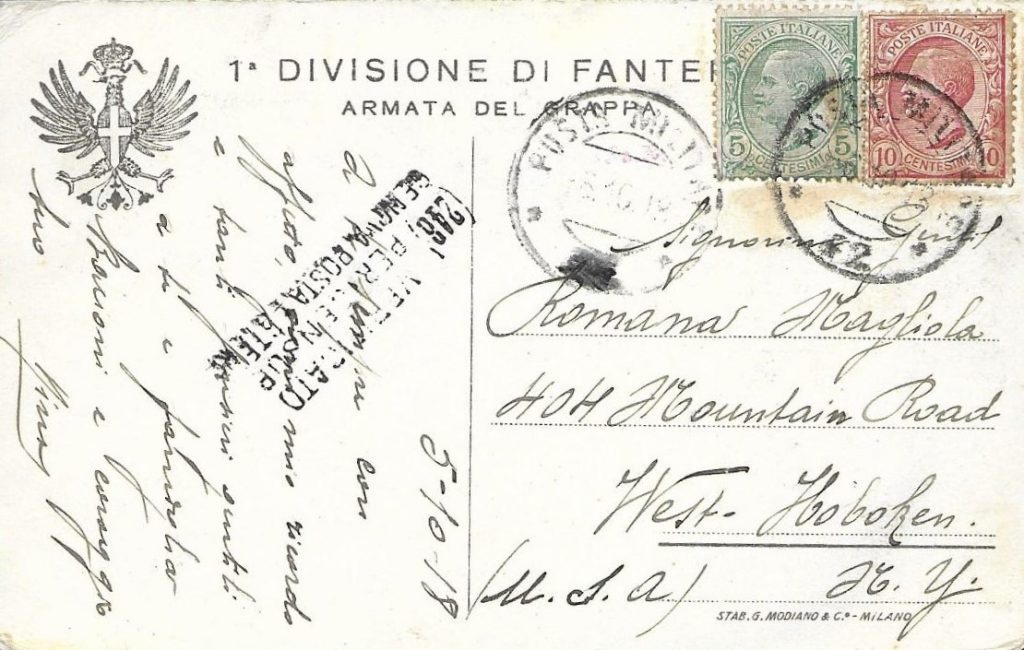 Epilogue. From Internet research, with help from Carlo Vingiani, I discovered that Nina was in the [Fourteenth] Federal census of 1920, living on Mountain Road in West Hoboken, New Jersey, and was not married. She was living with her mother who was the head of household, maybe the father was deceased? [Editor’s note: in fact, Lorenzo Magliola died in Hudson County, New Jersey on May 7, 1917. This information appears in the New Jersey Death Index of May 1917.] She had a brother Ettore and two sisters Linda and Ida.

Thus, Nino and Nina were never married. Did Nino die? I could not find out when he died, but he did not die during the war, as he is not listed with the fallen. Did he die after the war, maybe from the flu pandemic of 1918 that ravaged Italy, spread by the soldiers coming home?

Somehow, Nino’s collection of postcards received from Nina were given to Nina after the war, as I have postcards sent by both. Although, there are no postcards sent by Nina after 1916. Maybe they were sold before I bought the lot. This is plausible because Nina was mailing illustrated postcards while he was using the military issued ones, thus less attractive to be sold individually.

A lot is not known about them, but these postcards show their immense love and the hardships of war. They wrote to each other almost every day for four years. It is sad that the story lacks a “lived happily ever after” ending.

Clarissa Ferraris is a deltiologist and a physicist. She has worked all her life as a researcher on concrete and cement technology. After her Ph.D. she published over 140 papers (under her real name of Chiara Ferraris). She has collected postcard since she was 15 years old. Her main interests are vintage cards from Italy, Girl Scouts, … and men at work with concrete. She lives in Columbia, Maryland.
PrevPreviousA Look Back at Some Lost Open-Air Restaurants of New York City
NextThe American Dream – Own Your HomeNext
5 Comments
Oldest
Newest Most Voted
Inline Feedbacks
View all comments
Betsy W

Very interesting article and research. Thanks for sharing the story.

Cheers Clarissa!
Congratulations on having such a unique collection of postcards and for taking the time to research this powerful love story. Thank you for sharing your postcards in such an interesting article.

A real life Romeo and Juliet story! Thanks for sharing

It’s too bad I can’t read Italian, as I’d love to be able to understand the messages on the cards.

Hello Clarissa. I loved everything about this story, the postcards, notes on the weather, their love for each other….how difficult it must have been for these two. Wonderful how you were able to translate and understand and talk about these…your Mother and friend. I can only imagine the back and forth between them, and then with you also. These are the REAL DEAL, unvarnished war times, and how nice that their story has been kept together, this much of it, on postcards. Appreciate your sharing these here. What nice postcards…the better ones, and even the free ones provided by the… Read more »