In north-central Georgia, along state highway 83, just 42 miles east of downtown Atlanta, there is a Georgia Historical Commission marker along the side of the road marked, “The Poppy Lady.” There is an arrow that points to the right with an inscription that reads, “1½ miles.” 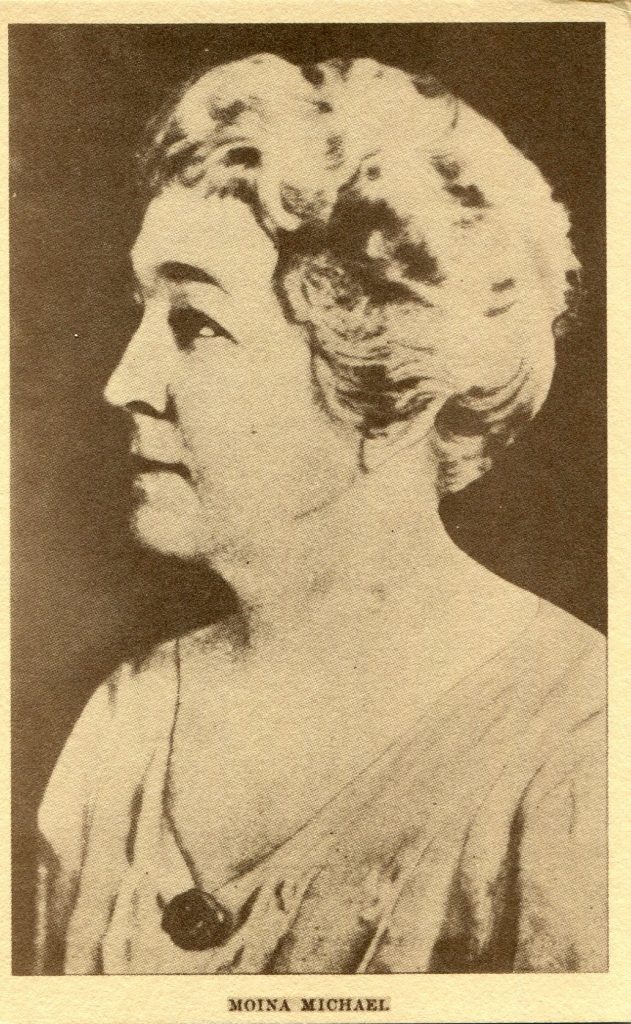 The arrow points to a huge boulder that marks the birthplace of Moina Michael. As a young girl, Moina earned an education at the Braswell Academy and the Martin Institute. She earned a teaching certificate in 1885 and started her career at age 16, in a log cabin school near her hometown of Good Hope, Georgia.

Miss Michael’s heritage was a tangled one, but her parents were wealthy from their inheritances. She was a direct descendant of the Revolutionary War General Francis Marion, affectionately known as the Swamp Fox. On her mother’s side of the family roots went deep into the Wise family of Virginia, which for generations had served as governors.

In the latter years of the 1910s, Moina decided to change her educational focus. She wanted to increase her own education with a goal of becoming a university level professor in a Normal School. She moved to New York City for advanced studies at Columbia University.

Summer study in Europe was just as popular in the 1910s as it is today. In June and July 1914 Moina was in Germany when the First World War began. It was not a safe place in those times, therefore she booked passage, through Rome back to the United States. She returned to her native Georgia and continued teaching.

In April 1917 when the U.S. entered the war in Europe, Moina took leave from her work and returned to New York. She spent her time training YWCA workers who would soon sail to Europe as helpers in the war efforts. The YMCA/YWCA sponsored thousands in wartime volunteers in schools, hospitals, and military and other care centers.

Just two days before the armistice was signed in 1918 Miss Michael was at work in the YMCA War Secretary’s Office in New York. At lunch that day she found a poem by John McCrae in Ladies Home Journal. John McCrae was a Canadian physician, author, artist, and soldier. He became well-known as the author of the poem, In Flanders Fields, the famous battlefield lament honoring the fallen. 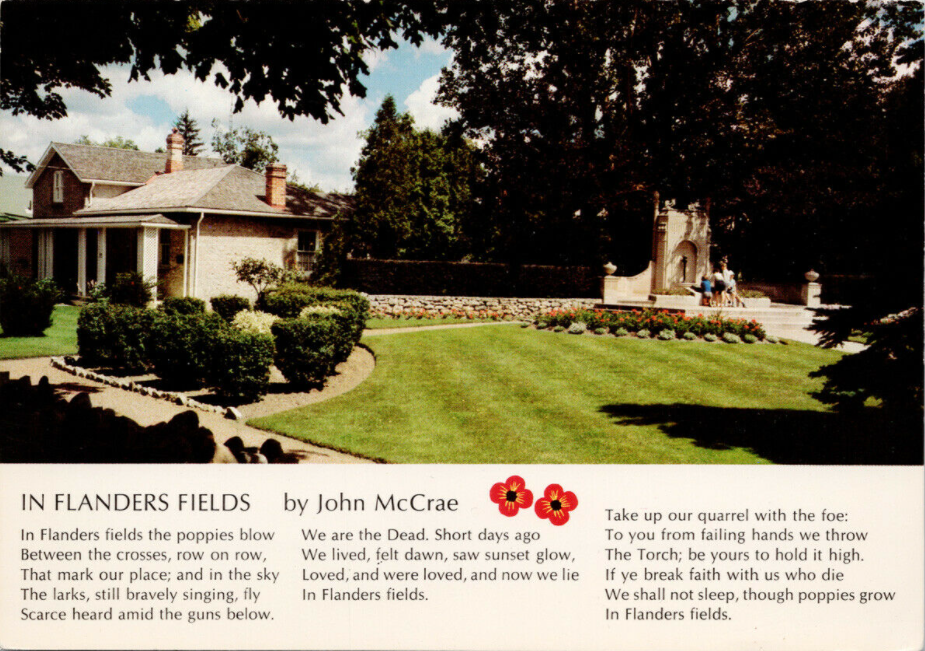 In Flanders Fields, the poppies blow
Between the crosses, row on row,
That mark our place; and in the sky
The larks, still bravely singing, fly
Scarce heard amid the guns below.

We are the dead. Short days ago
We lived, felt dawn, saw sunset glow,
Loved and were loved, and now we lie,
In Flanders fields.

Take up our quarrel with the foe:
To you from failing hands we throw
The torch; be yours to hold it high.
If ye break faith with us who die
We shall not sleep, though poppies grow
In Flanders fields.

Moina Michael was so moved that she vowed to always wear a red poppy in remembrance and in response to McCrea’s poem she wrote a compliment entitled,

We Shall Keep the Faith

Oh! you who sleep in Flanders Fields,
Sleep sweet – to rise anew!
We caught the torch you threw
And holding high, we keep the Faith
With All who died.

We cherish, too, the Poppy red
That grows on fields where valor led;
It seems to signal to the skies
That blood of heroes never dies,
But lends a lustre to the red
Of the flower that blooms above the dead
In Flanders Fields.

And now the Torch and Poppy Red
We wear in honor of our dead.
Fear not that ye have died for naught;
We’ll teach the lesson that ye wrought
In Flanders Fields.

After the war, Miss Michael returned to the University of Georgia. She taught extra classes for disabled servicemen. At once, she recognized that financial support was needed to provide for veterans. After three years of dogged persistence, she convinced the American Legion Auxiliary to sell silk poppies both here and abroad. An official project adoption date was arranged for 1921.

The name Poppy Lady identified Miss Michael ever after. She retired from university life in 1934 and published an autobiography in 1941, The Miracle Flower: The Story of the Flanders Fields Memorial Poppy.

There is a common misconception that the red poppy symbolizes the blood spilled during battles on the fields of Flanders.

It is true that the poppy was worn around the world in remembrance, but the red color had no relevance to blood.

The poppy symbolizes the wildflowers that were the first signs of life to grow in the turned soil of French and Belgium cemeteries. The poppies with their red, paper-thin petals were the only things to take root in the lime-rich soils contaminated by the battlefield debris.

The Staff of Postcard History offers this article for your enjoyment. It is a combined effort of many: our publisher, editor, webmaster and collectors/contributors far and wide. Please use the COMMENTS feature below to let us know how we're doing.
PrevPrevious“Matchmaker, Matchmaker, Make me a match.”
NextThe Big Five – Part TwoNext
8 Comments
Oldest
Newest Most Voted
Inline Feedbacks
View all comments
Irene

Thank you for writing about Moina Michael. She was a remarkable woman. One slight correction: Miss Moina died on May 10, 1944.

An excellent article and haunting, moving words as expressed by both authors and their poems.
One cannot help but, “Remember.”
It is ironic, Moina Michael passed without knowing whether the world would cease to fight in a ‘Second Great War’.
Keep the articles coming. Well done, I live some 35miles from the birth place of
Lt. Col John McRae, 1872 -1918 – Guelph Ontario, where they have a wonderful museum – featured in your postcard above. McCrae is the author of in excess of 20 other war related poems.

I enjoyed reading this very much. Thanks to the author.

“The Poppy Lady” article is truly inspiring. The author and the editor(s) should be singled out for special recognition. And I, for one, will be initiating the call for such. I will also introduce my daughters to the story about Moina Michael.