The work of hundreds of cartoonists has appeared on postcards and countless collectors will buy any comic card they find. In a lengthy conversation several years ago, the ultimate point was made when a quite reputable comics collector was asked, “Who is your favorite?”

The answer was, “All of them.”

As your Postcard History editor recently prepared an article that highlighted the Stage Door Canteen cartoonist, Barney Tobey, another, even less well-known cartoonist was mentioned as a postcard comic – George  Lichtenstein.

Among the longest running cartoons in history, Grin and Bear It first appeared in 1932 and had a continuous run of 83 years – until 2015. After Lichty created his cartoon, it enjoyed two very successful syndications. First with United Features and later by the Field Newspaper Syndicate.

Lichtenstein was born in 1906 and unwittingly launched a career when at age 16 he sold a single panel cartoon to Judge Magazine, a weekly satirical magazine based in New York City. In 1924 he enrolled at the Chicago Art Institute and attended for two years. He moved to Michigan and graduated from the University of Michigan in 1929. In addition to his studies, he also edited the campus humor magazine.

After graduation Lichtenstein was headed for a newspaper career and started by doing event and sport cartoons at the Chicago Daily Times.  George married in 1931 and two years later he introduced his Sunday and daily, award winning cartoon at age 25.

George moved his wife and two daughters to California and lived there until his death in 1983. He died in Santa Rosa on July 18.

Lichty, a name which he thought was the comic version of his surname, was a multiple winner of the National Cartoonists Panel Cartoon Award. The first time was in 1956 and three additional awards came in the 1960s. 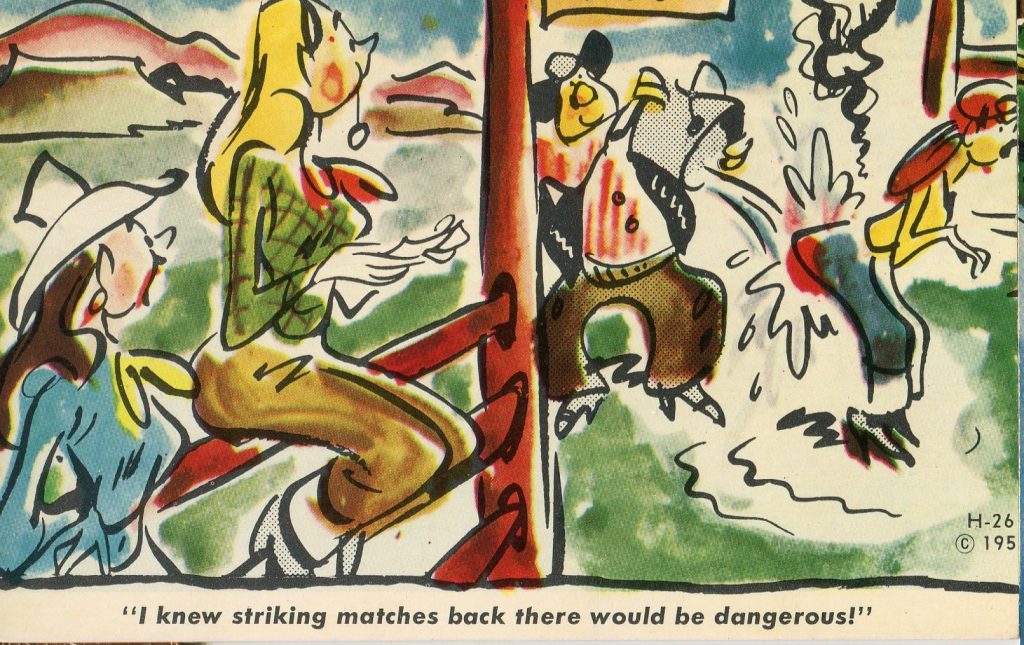 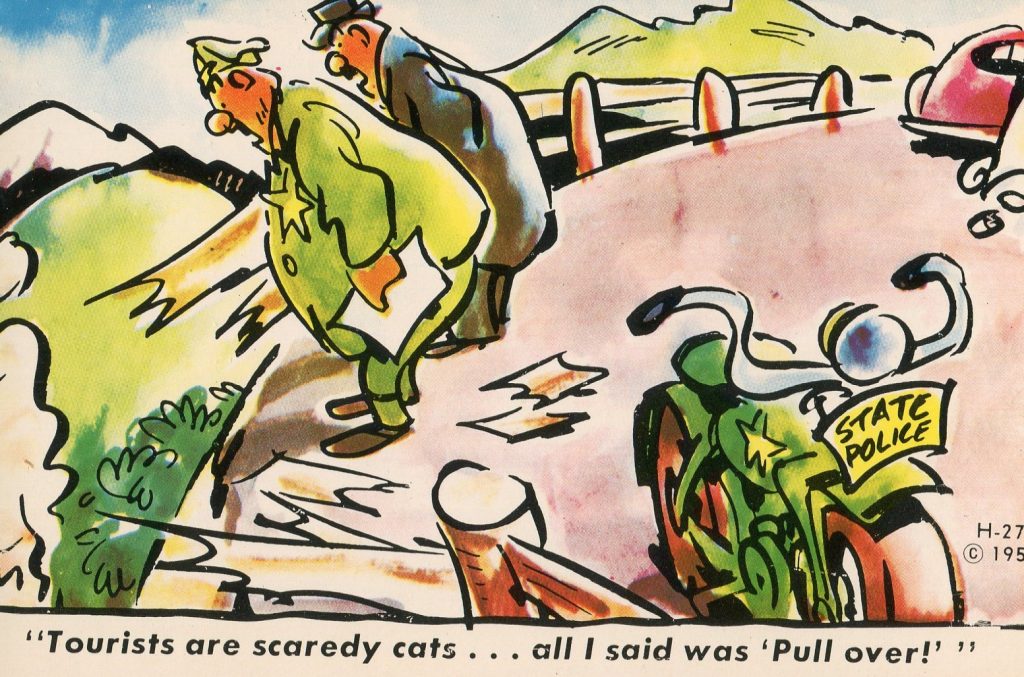 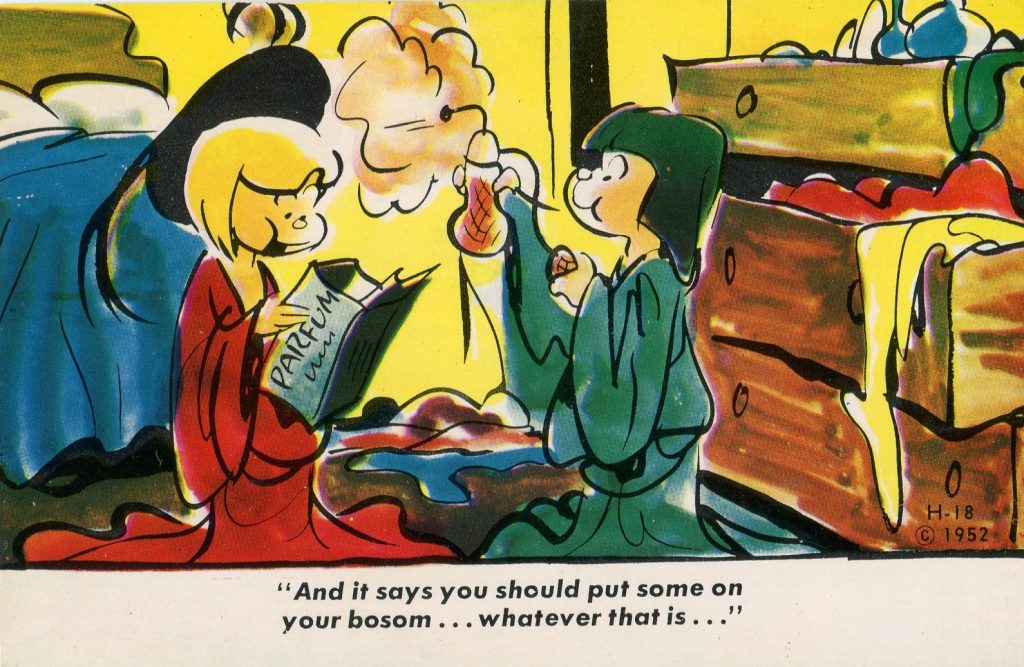 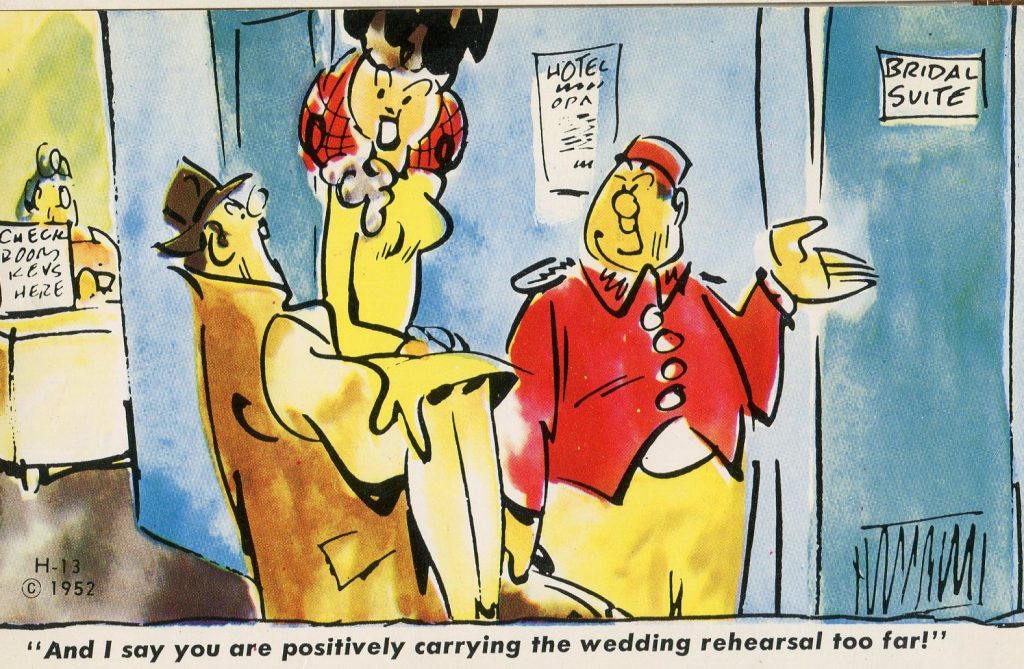 Lichty like so many of his contemporaries found his inspiration in everyday life situations and the social norms that he found around his family and his work.

He could be naughty and nice at the same time he was being sarcastic and cynical. Lichty’s style was dubbed animated smear. He insisted on using watercolor, even after it was decades out of vogue. 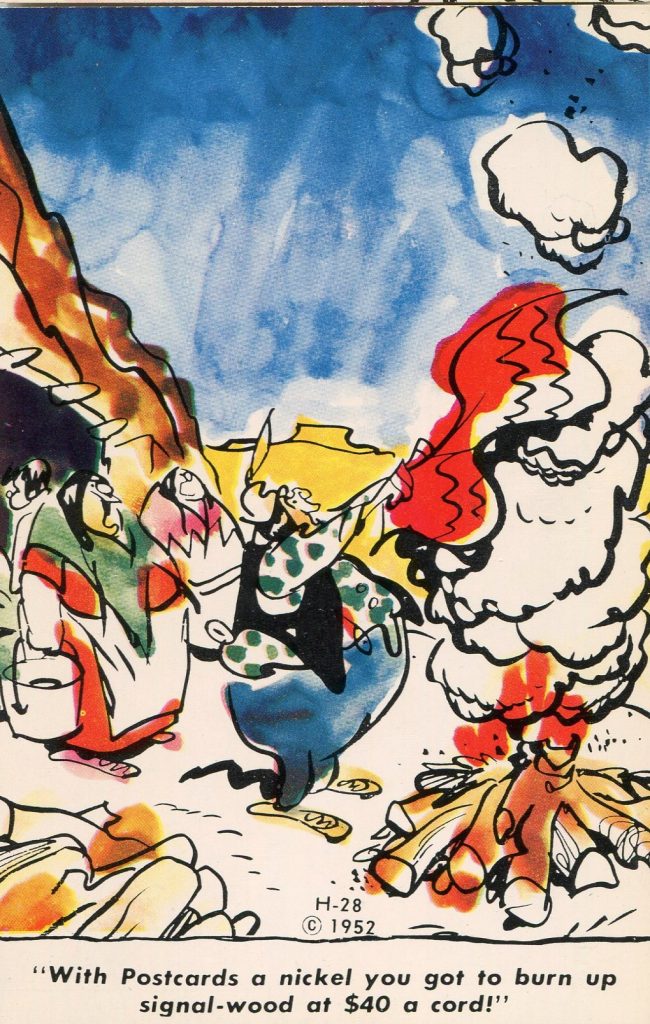 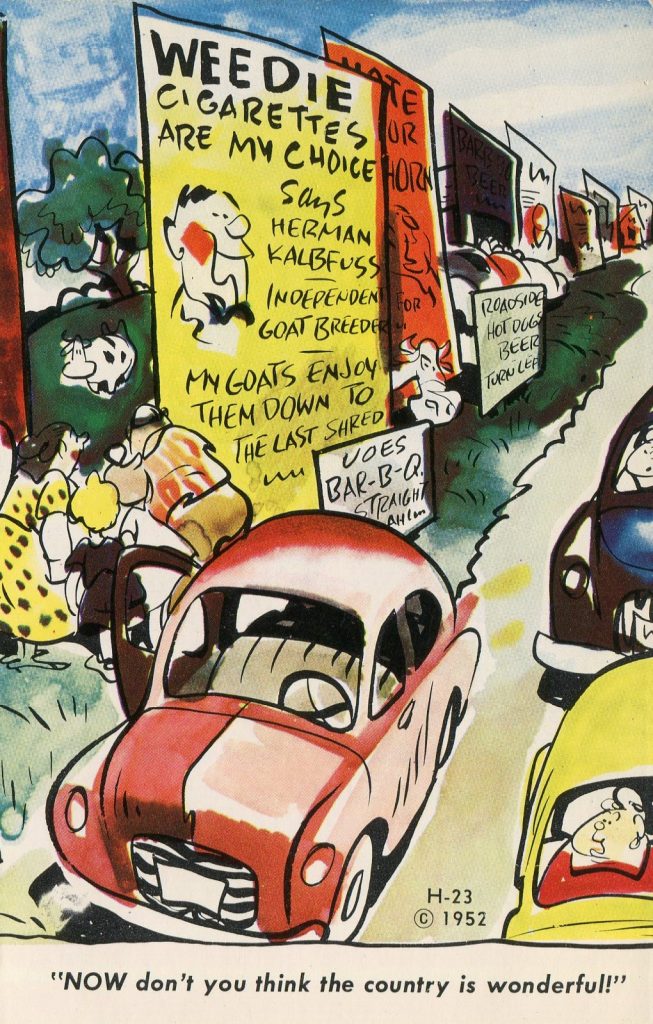 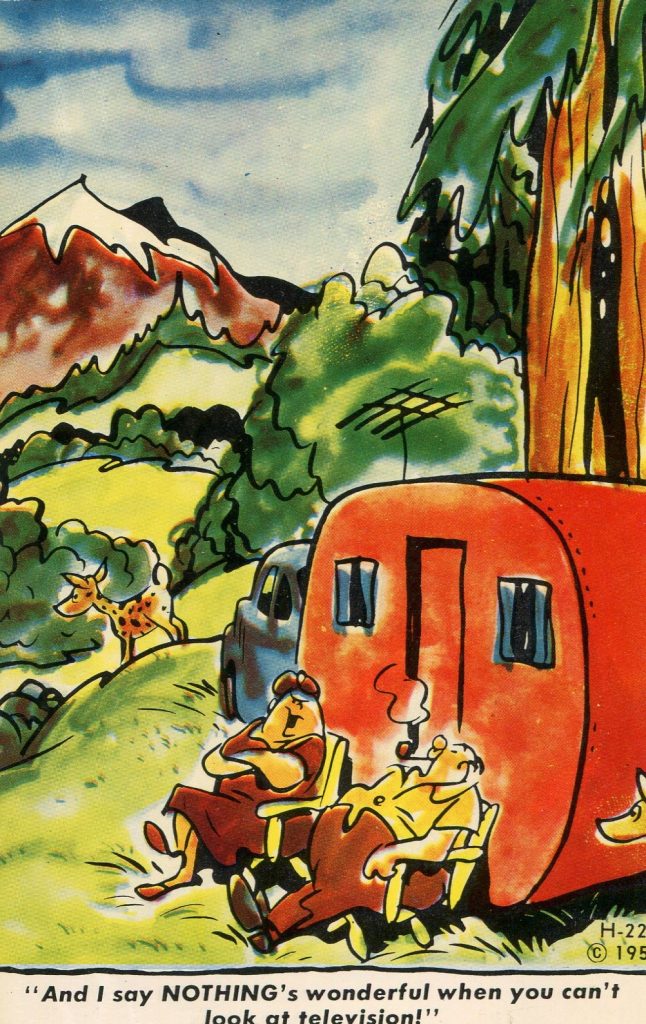 Lichtenstein’s primary contribution to postcards came in 1952. In a series of comics that ranged in topics from very young girls playing “dress-up” to state police examining accident scenes, or native Americans sending smoke signals to city-slickers peeking behind roadside billboards in an attempt to enjoy the country, Lichty’s cartoons were always successful.

[The set is well represented here. Each card has a number, preceded by the letter “H” and a copyright date of 1952. The set was published by Mike Roberts, a color printer production company in California. Roberts had a reputation of doing fine, high-gloss prints in vivid color.]

Lichtenstein’s brand of humor was cathartic and intense but when it came to comic, he frequently worked with his friend Arthur Erenberg who was better known in his later years when he collaborated on a project entitled The Shadow.

The postcard apparatus and the stamp box on every Lichty postcard were identical.

The Staff of Postcard History offers this article for your enjoyment. It is a combined effort of many: our publisher, editor, webmaster and collectors/contributors far and wide. Please use the COMMENTS feature below to let us know how we're doing.
PrevPreviousThe Case of the Everywhere Mill
NextPostcard History First Sunday Mystery Card July 2021Next
1 Comment
Oldest
Newest Most Voted
Inline Feedbacks
View all comments
Bob Kozak

I enjoyed “Grin and Bear it’ for many years, but don’t recall ever seeing a Lichty postcard.