The Case of the Everywhere Mill

All of Erle Stanley Gardner’s Perry Mason murder mysteries titles start with “The Case Of …” I wanted to borrow Gardner’s title stratagem for my article about the mysterious mill that was in two places at once, at least on postcards.

In the summer of 1968, my family took a vacation trip from our home in Virginia that included stops to visit my maternal grandparents in New York City and my father’s family in Lawrence, Massachusetts. I had started my postcard collection as a Cub Scout project a few years earlier and had accumulated almost five hundred postcards. During that trip, I was able to garner over a hundred more.

In Massachusetts, I purchased a Greetings from Lawrence, Mass. postcard that showed two scenes of Lawrence. The top image is a picturesque mill and autumn foliage. Under it is an image showing a country road as the leaves are starting to change color. In the distance are mountains. 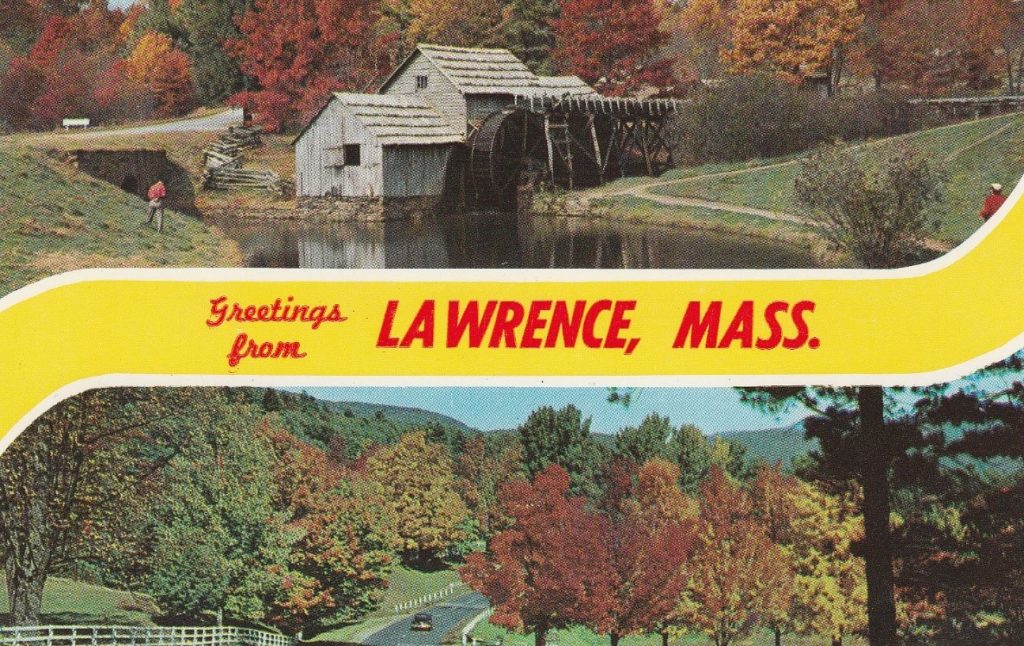 I showed the postcard to my father. He told me he did not recall an old mill near Lawrence. Also, the mountains in the background of the bottom picture were inaccurate since Lawrence, though hilly, is not near the mountains. My father suggested the postcard publisher may have used two images from the Berkshire Mountains in western Massachusetts. Lawrence, a gritty factory town, lacked scenic vistas such as the two pictures displayed on the postcard and perhaps the publisher thought he would help improve the city’s image.

On the trip home, we stopped for lunch in New Castle, Delaware, where I purchased several Delaware postcards. One of the postcards showed the mill pictured on the postcard from Lawrence. The caption on the back of the postcard suggested that Delaware could boast of “many scenic views such as this placid pond and old mill framed by glowing autumn foliage.”

When I reached home, I compared the two postcards. The pictures of the mill on the postcards were identical.  Was the mill actually located in Delaware rather than Massachusetts? My familiarity with Delaware at the time was limited to the Route 13 corridor that traverses Delaware north and south, so the mill’s location in Delaware seemed plausible. 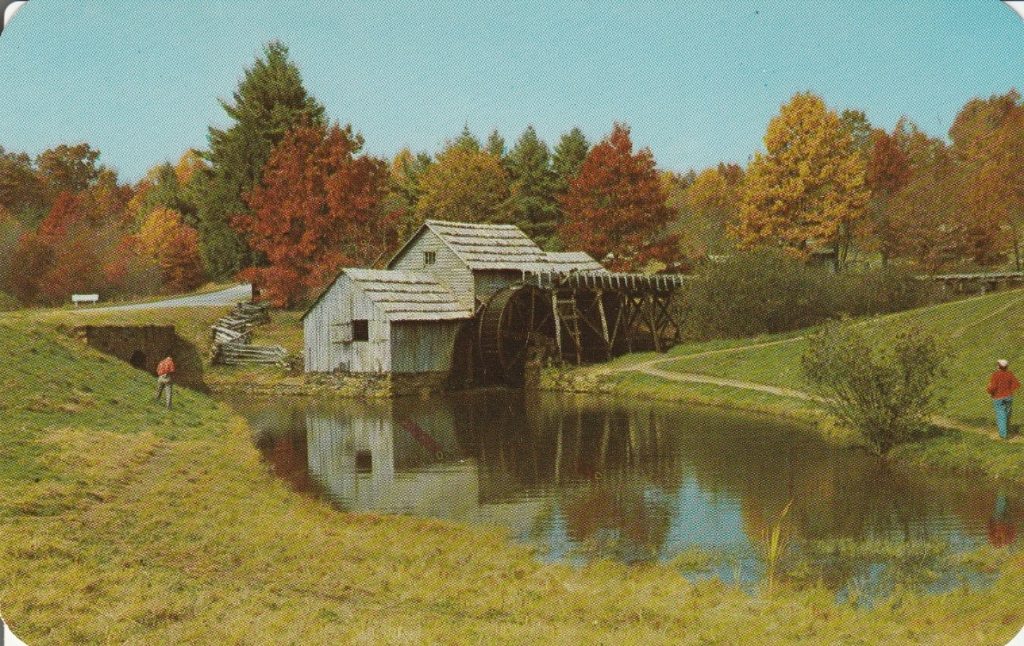 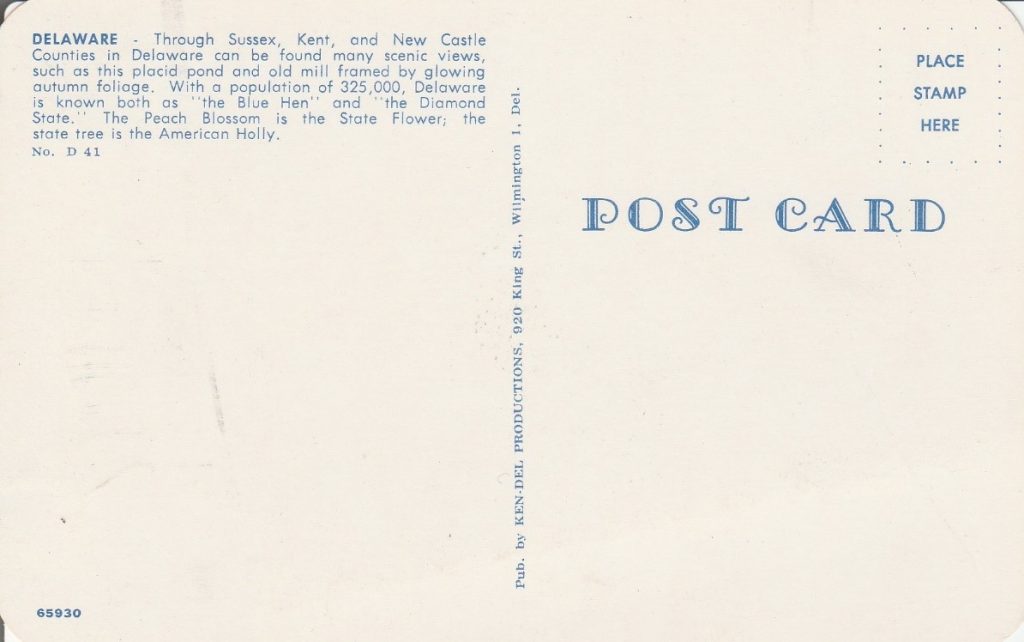 Address side of a Ken-Del Productions postcard.

A year later my family took a trip to the Blue Ridge mountains of western Virginia. On a postcard rack, I spied a familiar scene, the “everywhere” mill. The mill claimed by Massachusetts and Delaware is actually in Virginia.

Mabry Mill is located on the Blue Bridge Parkway at Milepost 176 near the Meadows of Dan. The nearest town is Floyd, Virginia, about fifteen miles away. The mill was built by Ed Mabry in 1905 and he operated it with the assistance of his wife, Lizzie, until his death in the 1930s.

In addition to grinding corn, Mabry operated woodworking and blacksmithing shops.  The National Park Service purchased the mill in 1938.  The mill was restored by the NPS in the 1940s and a restaurant is open seasonally at the complex. 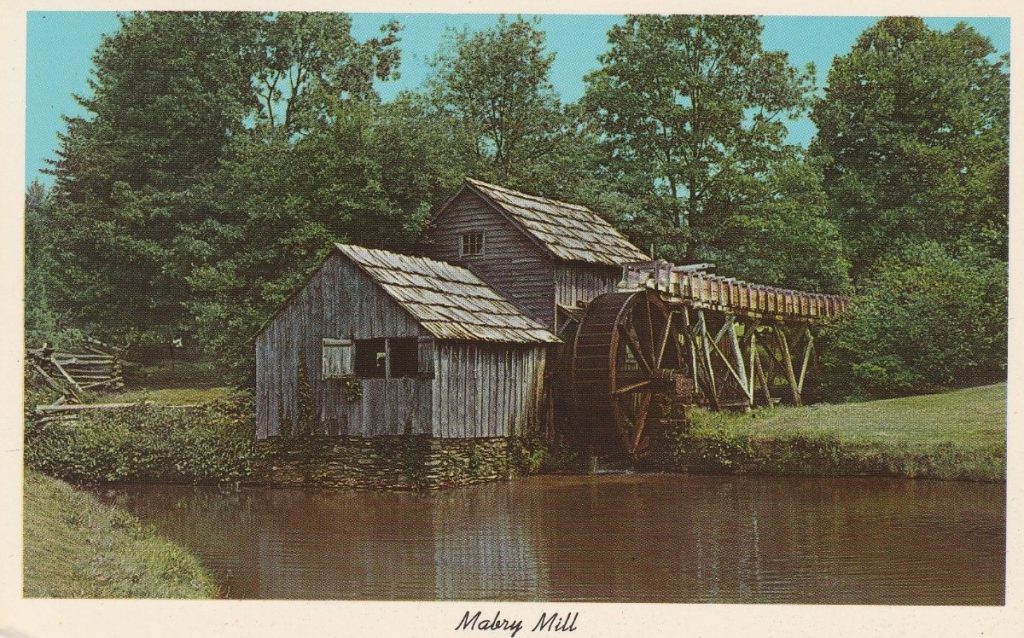 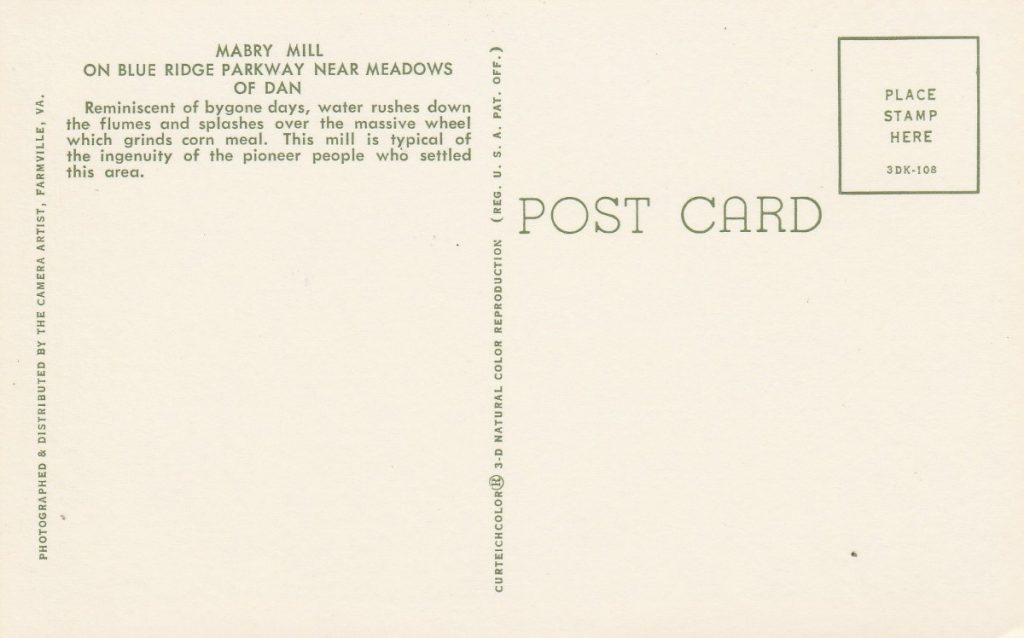 Going back to the Lawrence, Massachusetts postcard, the bottom picture looks suspiciously like the Blue Ridge Parkway.

Were the postcard publishers merely lazy when they misappropriated the picture of Mabry Mill for postcards from Massachusetts and Delaware? Or was it a deliberate attempt to gild the lily.

I wonder if Mabry Mill was used on postcards from other locales.

Daniel P. Hennelly is a mystery and science fiction writer from Norfolk, Virginia. A retired university administrator, he has collected postcards since his 1960s boyhood. He specializes in vintage United States postcards. Also, he has an extensive collection of foreign cards he started after receiving a gift from a 1930s honeymoon tour in Europe.
PrevPreviousAllow Me to Introduce Rene Cloke
NextLichtyNext
4 Comments
Oldest
Newest Most Voted
Inline Feedbacks
View all comments
BARBARA SENENMAN

I was just talking about this with my friend (another postcard collector). All those “Greetings from ….” that show a road with trees. Could be from anywhere. For the fun of it I had recently purchased a “Greetings from Valley Stream, Long Island” card that depicts children on a farm with a wagon and donkey. I showed it to my friend who had grown up on Valley Stream. I had joked, “Is this the Valley Stream you remember?” Besides kidding about the donkey he said, “I have never seen mountains on Long Island.” I looked closer at the card and… Read more »

Having recently visited the Mabry Mill off the Blue Ridge Parkway I immediately recognized it as the Mabry Mill. Makes one wonder how many imitations of other “local landmarks” make there way on to other postcards of other locations.

I’ve noticed beach scenes that are purportedly located both on Cape Cod and in Florida, even captioned “Sand in my Shoes” on both occasions.

One of the major publishers using the same (frequently unlocatable) scenes for many locations was the Miller Art Company of Brooklyn which operated from 1922 to 1941. Its cards were of particularly poor quality and seldom sought after by collectors but they continue to show up in sales – often with ridiculous locational attributions. I have written about this company in a recent “straitpost” blog posting found at Unloved and unlovely – the Miller Art Company’s generic view cards – STRAITPOST (wordpress.com). The subject is also covered in an article in the most recent Torontro Postcard Club magazine “Card Talk.”