This beautiful old ship card from the S. S. Mongolia was discovered as I dug around in some postcard boxes while visiting Monterey, California. 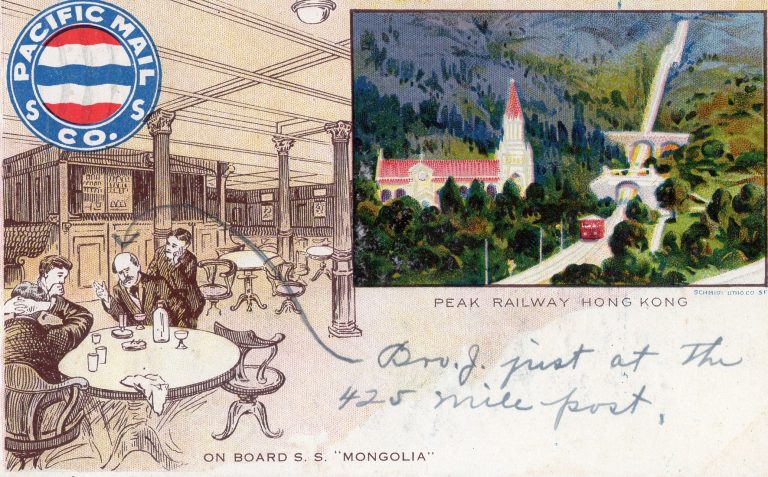 On Board S. S. Mongolia

The card has an undivided back furnished by “The Pacific Mail Steam Ship Company” of San Francisco, California. It was mailed from Honolulu, on December 18, 1907, to Miss Eva Shaw in Kilauea, Kauai (Island/County), Hawaii, arriving the same day.

The address-side of this card has a very clear and well executed cancel on a one-cent Benjamin Franklin (Scott #300) stamp. It also features a “PACKET BOAT” rubber stamp marking. The front of the card shows the Pacific Mail Company’s logo with an inset image of the famous Peak Railway in Hong Kong, China. 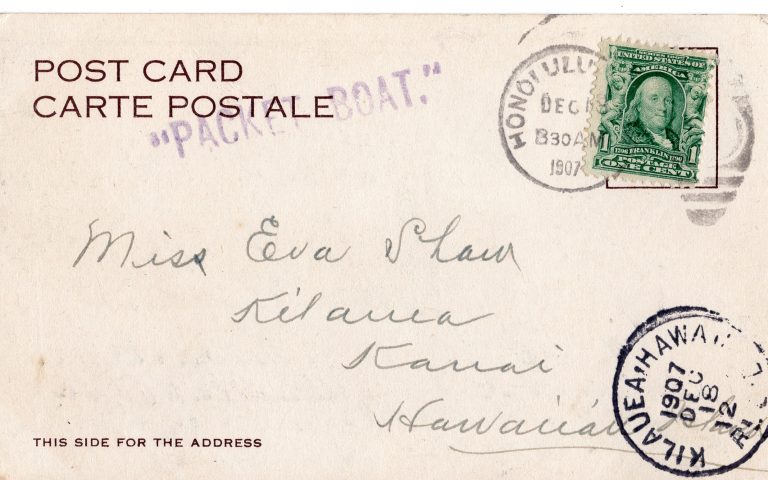 Address-side of On Board S. S. Mongolia

As hard as I have looked, I just do not know what the additional drawing is. I believe it may be the bar aboard Pacific Mail’s ship S.S. Mongolia. It looks like the guy at the table is telling a good story to his friends! I am also unable to figure out what or where is “425 mile post;” can anyone help?

Miraculously, Ray Hahn came up with an answer found in the Dictionary of Modern Nautical Terms published in London in 1888 by Collton & Sons.

Of the two possible meanings Mr. Hahn found for “425 mile post,” I believe this explanation works best. Many sailors serving aboard British ships of the time were of Scottish descent. Although this card was written aboard an American ship, I believe there had to be many British passengers and crewmen on board. With this in mind, it was long thought that the distance between Edinburgh, Scotland and London, England was 425 miles (actually a few miles short of that). The term “getting near the 425 mile post” became a way of expressing the end of a journey.

The other explanation, and the earliest, is traced to the mid-19th century. As members of the Victorian Navy, sailors used measures of time remaining before a special event was to begin. Traditionally, both officers and sailors aboard these ships enjoyed “Tea Time” at “half-four” a mostly nautical term for abbreviating 4:30 o’clock.

The Pacific Mail Steam Ship Company was founded on April 18, 1848. The company received a government contract to carry the mail to the Pacific states from Panama. Mail headed to the west coast was shipped to Panama and carried by train to the Pacific coast where it was transferred to one of the company’s steamers for delivery to west coast cities.

Pacific Mail Steam Ship Company went on to be a prime government contractor for carrying mail from the United States to Asia and all points in the Pacific. The company had weekly departures from Hong Kong and San Francisco carrying mail and passengers to destinations across the Pacific Ocean.

Interestingly, as a government contracted mail carrier, the ships of the Pacific Mail Steam Ship Company were also the primary carrier of immigrant Chinese laborers. These were the people who physically built the transcontinental railroad in California.

The ship S.S. Mongolia was launched on July 25, 1903, at the New York Shipbuilding Company [in Camden, New Jersey]. Both she and her sister ship, S.S. Manchuria were built to carry mail and passengers from San Francisco to Hong Kong by way of Honolulu, Hawaii. Due to the great importance of laborers being imported to the United States from China the ships accommodations were thus reflected; 350 First Class, 68 Second Class and 1,300 steerage!  S.S. Mongolia continued to serve having two different names, President Fillmore (1929) and Panamanian (1940). She was scrapped in 1946.

“PACKET BOAT” stamped mail was delivered by government contracted boats whose main function was to carry the U.S. Mail.  Today the J. W. Westcot, a 45-foot mail boat not only delivers mail, but also has its own ZIP CODE: 48222. She delivers mail to ships traveling on the Detroit River in Michigan!

It always thrills me as to how much we learn by reading and studying one single postcard. This is a perfect example.

If a collector cares to arrange their Pacific Mail Steamship Company postcards in chronological order, S.S. Mongolia (1903) would hold the penultimate place on the list. Mongolia’s sister-ship, S.S. Manchuria (1904) would be last. Each was a 27,000-ton twin screw steamship.

The Pacific Mail Steamship Company series that included the card featured here seems to come from a “first” series (so called because the earliest cancellations have been found on cards of this design) that featured a topic illustration of pen-and-ink with a colored photo inset image of a “destination.”

A subsequent series enjoyed an identical format except the feature image was a pastel or watercolor.

Yet another series (likely the last of the double-image designs because of later cancellation dates) featured either a land or on-board main image with a monochromatic (black & white) photograph of a “destination.”

Lastly, what may be called a “sunset” series shows at least three of the Pacific Mail Steamships “at sea, at sunset” by an unknown artist. Cards have been found from this series with postmarks from 1908 to 1923.

Caution: the “collector information” is advisory.
Nothing is absolute!

Shav La Vigne is the president of the San Jose (California) postcard club. He has been a loyal reader since Postcard History Online Magazine first appeared in the Spring of 2019. Shav has collaborated on several past articles and there are two more in our current publication queue.
PrevPreviousConnect the Dots
NextColorado’s Garden of the GodsNext
4 Comments
Oldest
Newest Most Voted
Inline Feedbacks
View all comments
Stefan Sommerfield

Great piece of history from a post card. The Peak Tram in Hong Kong remains a great experience both for current view and past history. Steerage conditions on ships must have been pretty bad for a Pacific crossing.

I noticed that a plant was identified as “wistaria” on one card and assumed the publisher had misspelled “wisteria”. However, a bit of research revealed that the legume was named by botanist Thomas Nuttall for Caspar Wistar, a professor of medicine at the University of Pennsylvania, and the more common spelling may reflect the fact Nuttall also had a friend named Charles Wister.

Thank you for the very interesting article on Pacific Mail cards I have been collecting them for many years.