A History and Mystery

My mother collected postcards in Germany from the late 1920s. She travelled and sent them to her children and grandchildren. Omaha’s postcard lady, Burnice Fiedler, assisted me with four Arcadia local history books. The last, Welcome to Omaha, appeared in 2018 and featured hotel postcards. 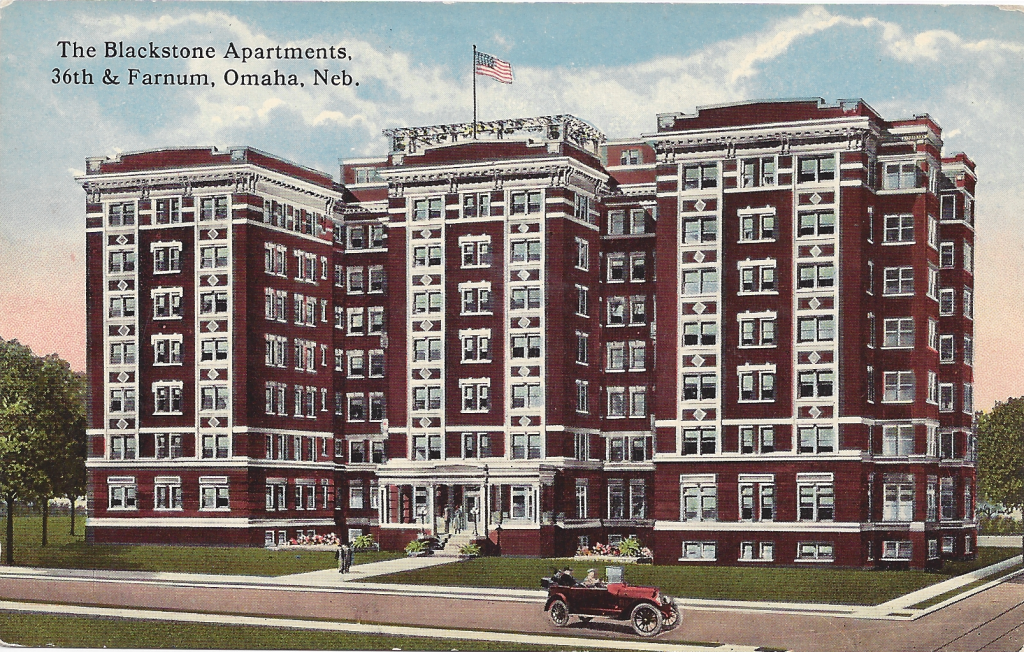 Architectural rendering of the Blackstone Apartments, circa 1916.
The address side caption calls Omaha, “… the Convention City of the West.” 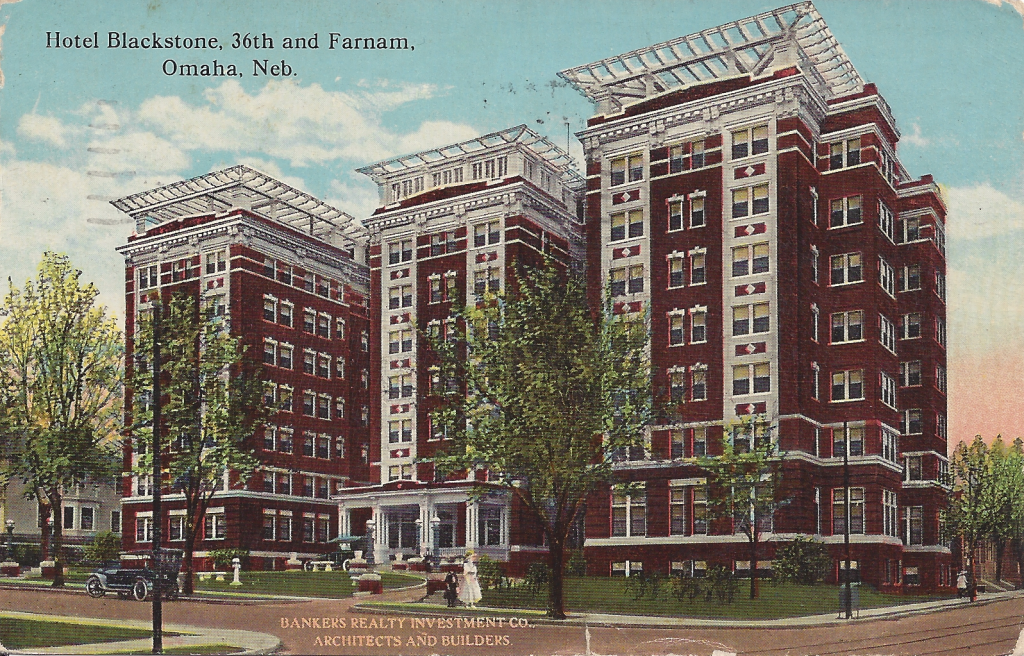 The Blackstone, circa 1919, managed by Bankers Realty Investment Company.

The Omaha World-Herald reported that ground was broken for Blackstone Family Hotel in early May 1915 on land purchased “last March” at 36th and Leavenworth from the Kountze Estate. Bankers Reality Investment Company, a commercial and residential real estate developer, financed the $300,000 project and clearly marked its role on the postcard.

The E-shaped building had eight stories. The first four floors had one and two room apartments with their own baths. Floors five through seven had three- to six-room units, some with sleeping or sun porches, a kitchen, refrigerator, and gas range.

The Blackstone projected opulent living. In January 1916 hotel management, advised by Orchard & Wilhelm, spent ten days in Chicago outfitting the hotel with furniture, cutlery, and other fineries, such as chandeliers, standing lamps, table lamps, carpets, upholstered couches, and easy chairs. Paintings on the walls were stylish and ornate.

The hotel, scheduled for completion on February 1, 1916, advertised for 75 experienced waitresses and 25 experienced chambermaids on September 27, 1916. Hundreds of invitations were mailed to inspect the property on Saturday, October 7. Rents were $42.50 and upward. In mid-October changes of address to the Blackstone began appearing in newspapers. The Blackstone was a premier location for long term residents in an apartment hotel environment. The Blackstone would be “a transient and residential hotel, with dignified yet homelike atmosphere.”

The Blackstone’s residential business model of elegantly appointed family apartments came with maid, janitor, bellboy service, and food for the refrigerator. The attractions of downtown living included proximity to many businesses, no lawn mowing or snow plowing. It was near the post office and adjacent to five car lines and the new million-dollar Omaha Athletic Club.

The North American Hotel Company managed the hotel and in December 1917 bought it. Hotel building obligations in Grand Island, Kearney, Ogallala, and Scottsbluff created financial stress in 1919 accompanied by lawsuits and bankruptcy.

Charles Schimmel (1871-1938) was the son of a successful Vienna caterer. Charles came to Chicago at age 16 and moved to Quincy. In 1915 he built the Custer Hotel in Galesburg, Illinois. He purchased the Blackstone in December 1920 for $800,000. Irvin A. Medlar, editor of the Mid-West Hotel Reporter and broker in the deal said that Schimmel “will endeavor to make the Blackstone as perfect in catering as it is architecture.” 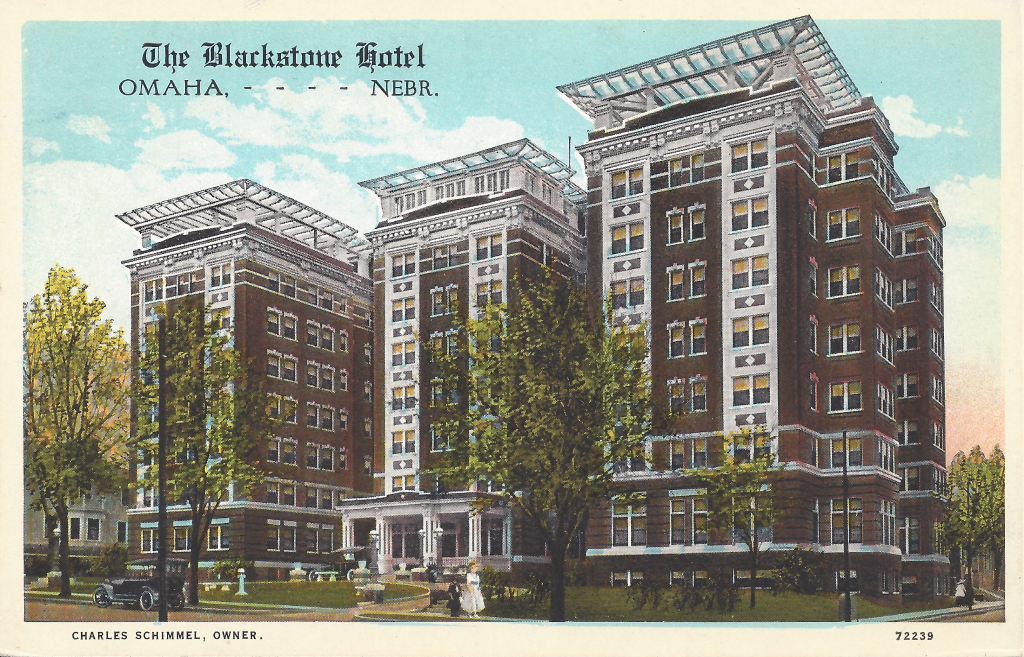 Identical image as above, except for the ownership statement in the lower left.
An address-side caption described Blackstone’s ambience.
Blackstone Luxurious detached Homes
One to Six Rooms
Privacy, Refinement, Elegance, Beautiful
Environment, an Atmosphere of Culture,
a Superior Service.

Charles Schimmel, a second-generation hotelier and hospitality professional and his four sons operated the Schimmel hotels for about 50 years. A. Q. (Abe), Bernard, Edward, and Walter managed the Blackstone; the Cornhusker in Lincoln, the Lassen Hotel in Wichita, the Town House in Kansas City, Kansas, the Hotel Kings-Way in St Louis, Missouri, and the Hotel Lincoln Douglas in Quincy, Illinois.

The Blackstone noted for entertainment and cuisine introduced the Cottonwood Room, Plush Horse Coffee Room, Golden Spur, and the Orleans Room between 1941 and 1955. They catered events and conventions and did so with service and elegance. Bernard’s cookbook, Joslyn Presents Bernard Schimmel’s Masterpieces, appeared in 1975. Radisson Management Corporation of Minneapolis purchased the Blackstone in 1968. 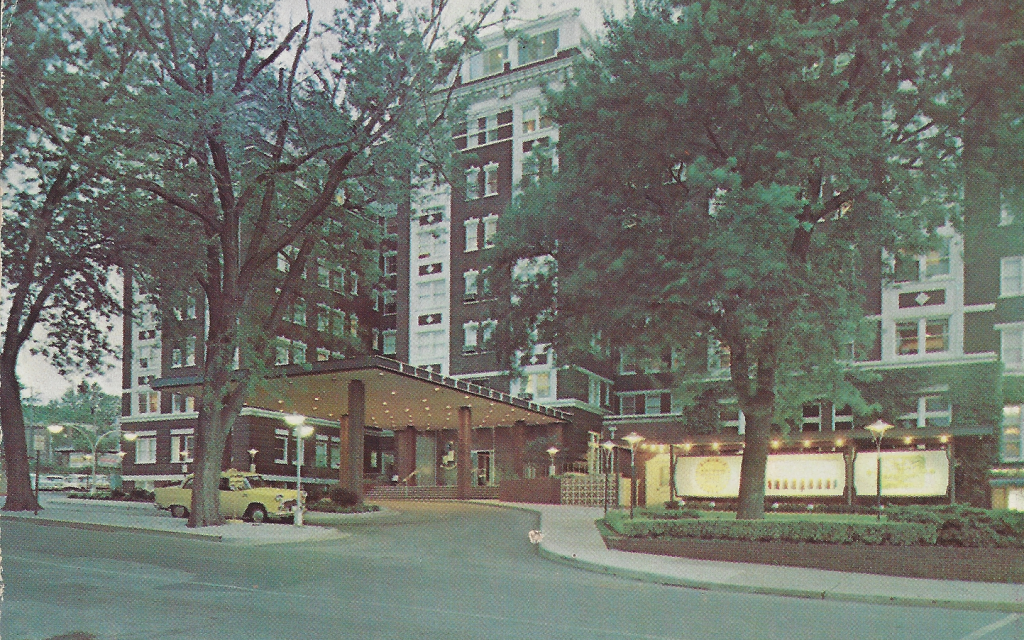 The Blackstone as a Radisson Hotel, 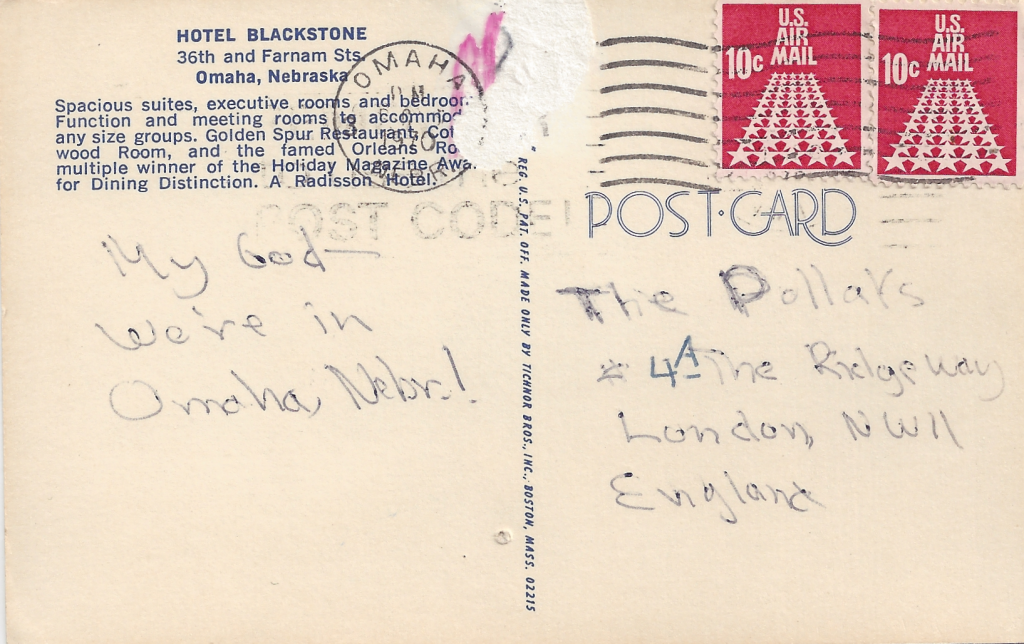 This card postmarked 1970 was addressed to the author.

Karen and I spent 1970 in London where I worked on my doctoral dissertation. We rented a single room at 4A The Ridgeway for £10 per month. We cooked on a Baby Belling stove. At that time, we had no connection to Omaha and may have been flummoxed if asked to find it on a map.

Here is the mystery.  We don’t remember who sent the unsigned message – “My God — We’re in Omaha Nebr!” We saved the postcard, and it became an uncanny prophecy. We lived in Omaha from 1974 to 2016 where I taught at the University of Nebraska at Omaha and practiced law.

Radisson operated the Blackstone from 1968 to 1976. In 1974 they had 137 rooms of which twenty were permanent residences. They wanted it to be 50:50. The hotel closed in 1976. Blackstone Center was renovated and purchased by Kiewit Corporation in 2007. It resold in 2017 to Clarity Development Corporation and Green Slate Development who committed $76 million to restoring the hotel amidst a mid-town neighborhood redevelopment and revitalization program.

The name Blackstone was lost when Chicago rehabilitated its 21-story Blackstone Hotel that opened in 1910 and trademarked the name. Omaha’s Blackstone repurposed as an office building was denied its name. In its current iteration the Kimpton Cottonwood Hotel has 205 guest rooms. 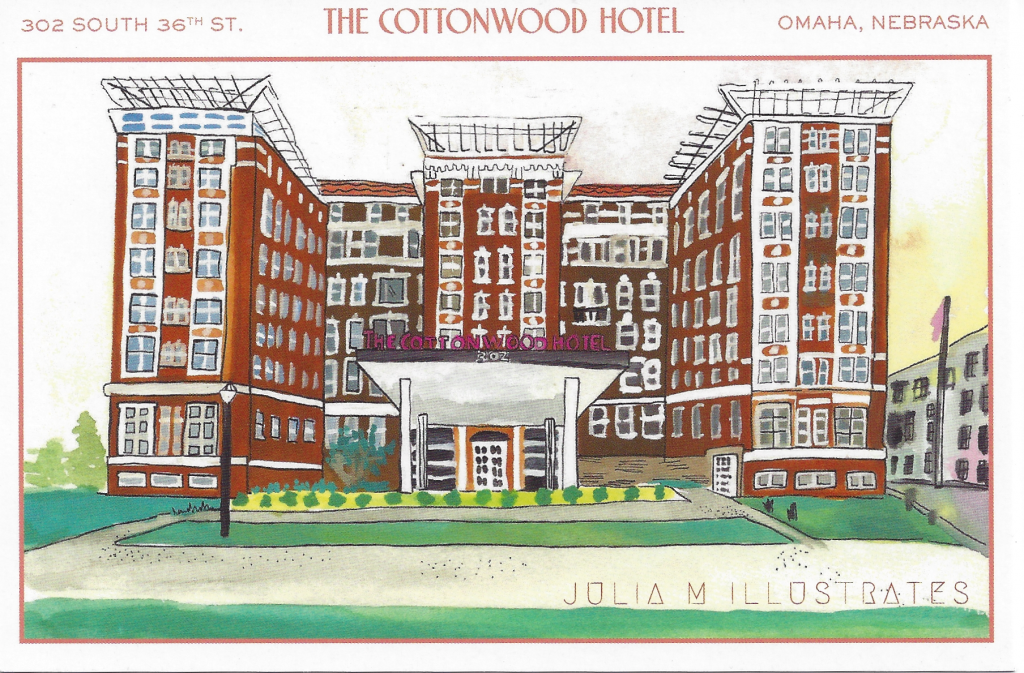 Do you have any other postcards or letters to compare handwriting samples?
Thank You for sharing .
Interesting read.

Oliver, loved this article. The Blackstone was so amazing. It was the halfway point in the days of long train journeys between the east and west coast and everybody who was anybody stayed there. As to Mr. Schimmel, you know, we here in Omaha firmly believe he did create the Ruben! His huge salad bowl was used by the Joslyn for many years. It was the size of a bass drum and was on legs. He also sent the wonderful Flo Jones over to the Joslyn to be the cook in the 1960s and she made the most heavenly chocolate… Read more »

So interesting. Wonderful history of this giant building in Omaha. The Schimmel name was long associated with Wichita’s Lassen Hotel, and too there was a Schimmel Motor Inn on the east side of town, near the Kansas Turnpike entrance that motorists took south to Oklahoma City, and north to Kansas City. It is so interesting to read about all of this hotel business. THANK YOU.

Looking forward to more articles from you, Oliver. I wonder if the food that was supplied to residents was ordered by each individual tenant, or simply supplied in the way a modern hotel room may feature complimentary chocolates.

unless i am mistaken, this is where some people think the reuben sandwich was invented at a weekly poker game.

Yes’ the wholesale grocer Reuben Kaye claimed to be the inventor.

Bernard and Bea Schimmel were close family friends of my parents, Paul and Jeanne Gaillard. If you have ideas how I could locate their daughter Connie I would love to contact her! Write lesliegcline@gmail.com!