Planning for the 1893 Columbian Exposition began in 1890.  Charles W. Goldsmith arrived in Chicago in late 1891 as a representative of the American Lithographic Company of New York City. The purpose of his move was to obtain a contract to produce official postcards for the World’s Fair.

The Chicago World’s Fair was held in 1893 to celebrate the 400th anniversary of Columbus arriving in the New World.  The dedication took place in October 1892 but because of construction delays the fair did not open until May 1, 1893.  It was still very much under construction on opening day.

The Exposition covered 690 acres featuring nearly 200 new but temporary buildings, covered in plaster, cement, and jute fiber called staff and spray painted white. The nickname “The White City” was quite proper. Forty-six countries were represented at the Exposition and a total of 27 million people would attend during the six months that it was open. On October 9, 1893, Chicago Day, the Fair set a world record of 751,026 people attending an outdoor event. The fair closed on October 30, 1893.

The Chicago Fair had many firsts. The United States issued its first commemorative postage stamp at the fair. Visitors got to ride the first Ferris wheel and the first moving sidewalk. Juicy Fruit Chewing Gum and Pabst Blue Ribbon beer were introduced, along with the nation’s first government issued postal cards – with colored pictures printed on the reverses.

Goldsmith’s plan was to print multicolored “official” souvenir postal cards for the fair and sell them at the fair from vending machines at two for five cents. He set up a small print shop in Chicago to print the cards. He would receive uncut sheets of cards from the post office to print. 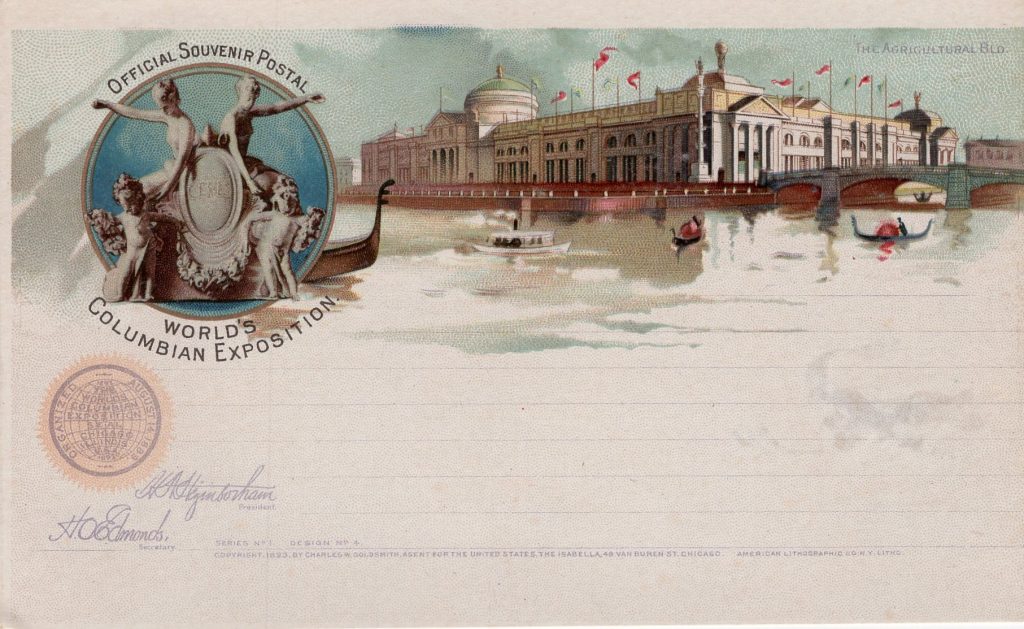 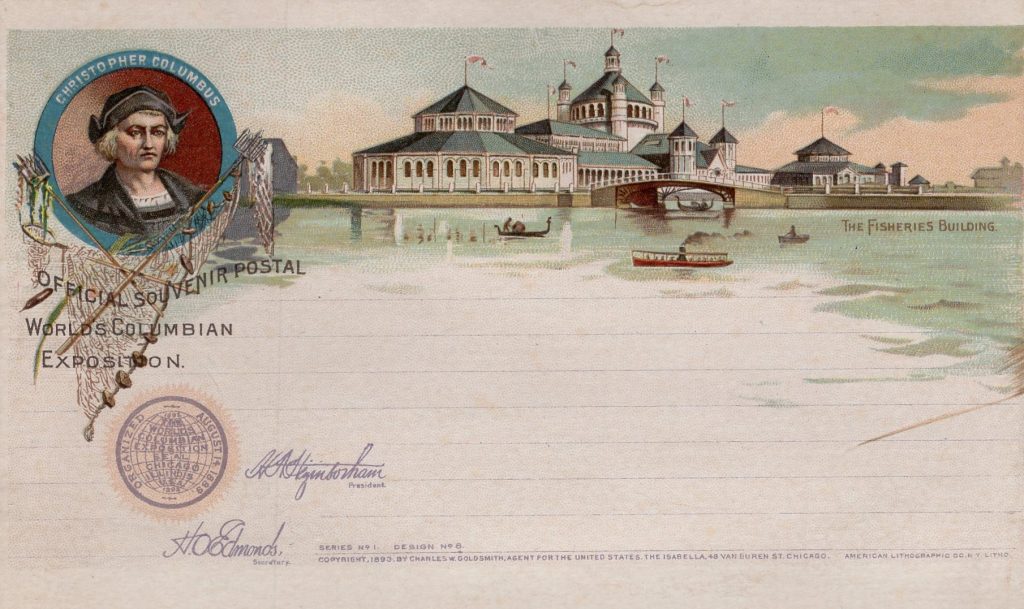 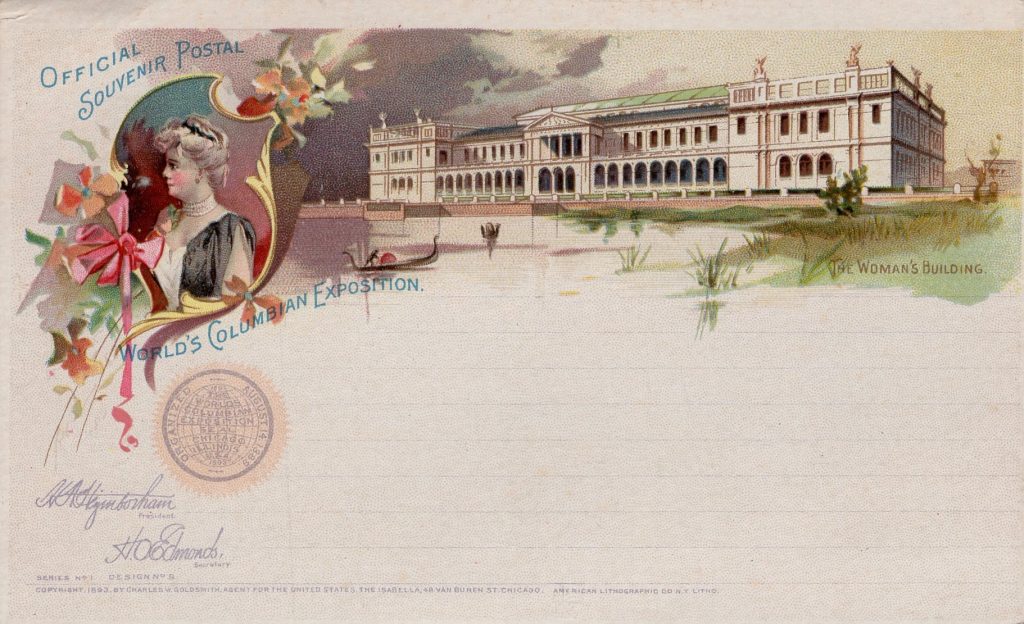 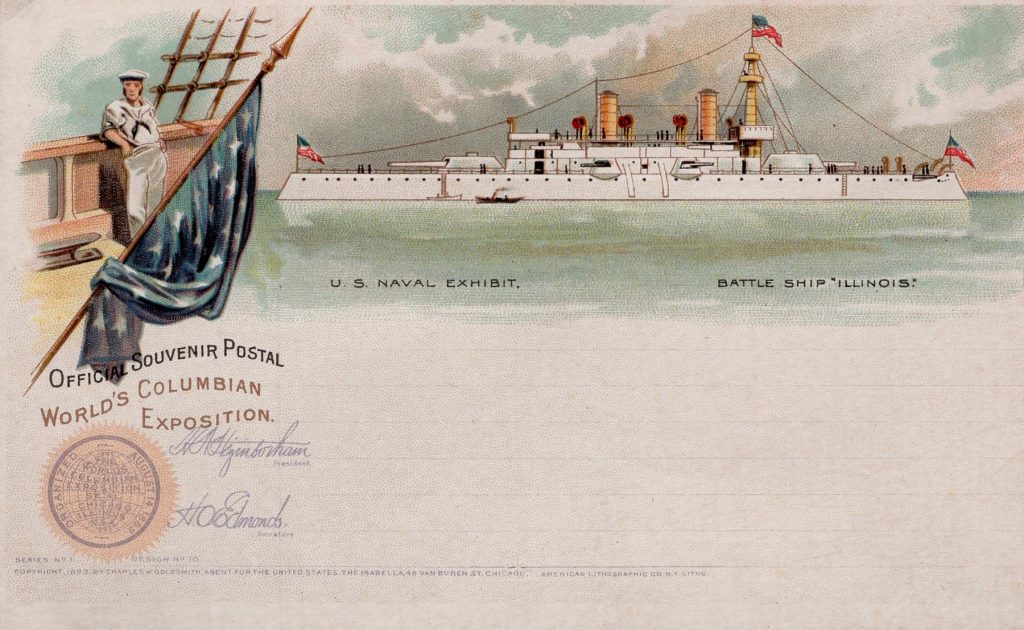 Goldsmith personally presented to the fair officials four postal card designs of fair buildings whose construction was nearly complete. They were the Agricultural Building; the Fisheries Building; the Woman’s Building, and the Naval Exhibit.

Each would be printed on the white coated back of the 1891 Grant Postal Card.

Several other companies applied for this contract as well. The fair committee was so impressed with Goldsmith’s proposal to print in multi-colors that on April 21, 1893, they gave him the contract. This allowed for 100 slot-machines on the fairgrounds to sell the cards, of this 15% of sales would be given to the fair committee. 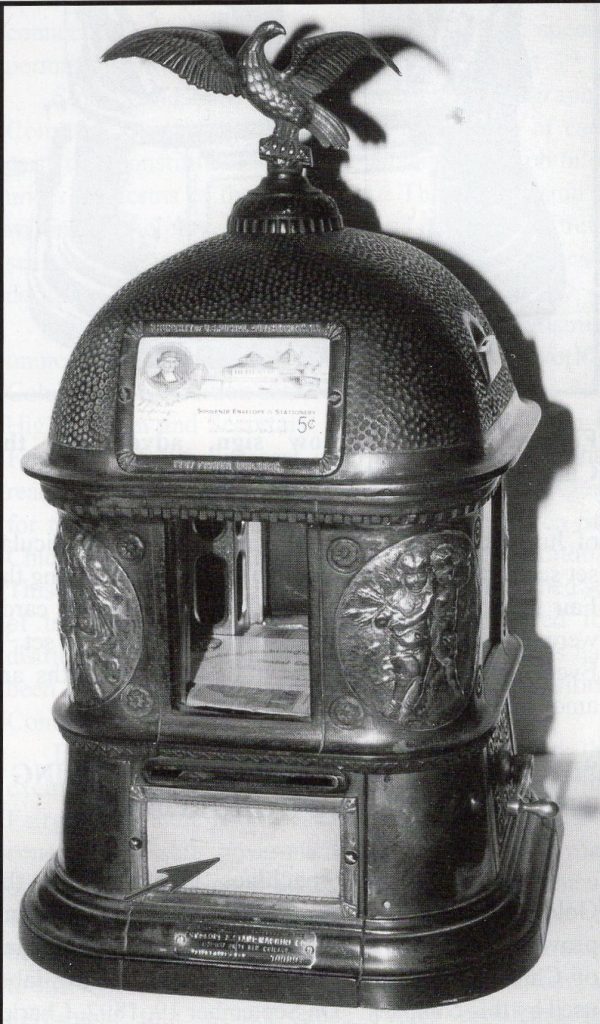 One of the postal card sales machines.

Goldsmith had only nine days to get the cards printed and to the fair by opening day. He contracted with the Envelope and Stamp Machine Company of Chicago to lease the needed special vending machine that would deliver two of the cards for five cents. Keep in mind, each of these cards had one-cent postage going to the federal government and 15% of sales going to the fair.  This left little for Goldsmith.The contract with the fair allowed for Goldsmith to sell his cards off the fairground without paying the 15%. He contracted with J. W. Scott Stamp and Coin Company of New York to sell the cards in the city. A set of ten cards was offered at 29 cents if mailed or 25 cent 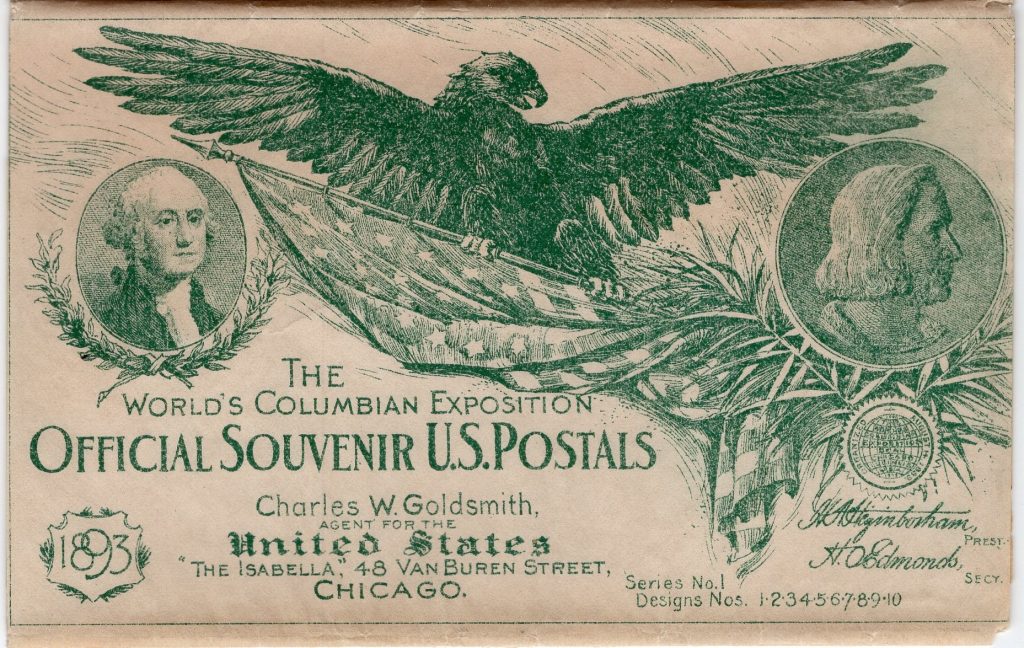 Photo of the wrapper used to package the ten-card set.

By November the company announced that they sold over 1,000 sets and very few remained.

Using records compiled by the fair, it is known that Goldsmith sold $46,450 worth of cards on the grounds during the fair. At two for five cents, that came to 1,858,000 cards sold on the fairgrounds. The exact number of cards printed is unknown but estimates suggest it was two million. 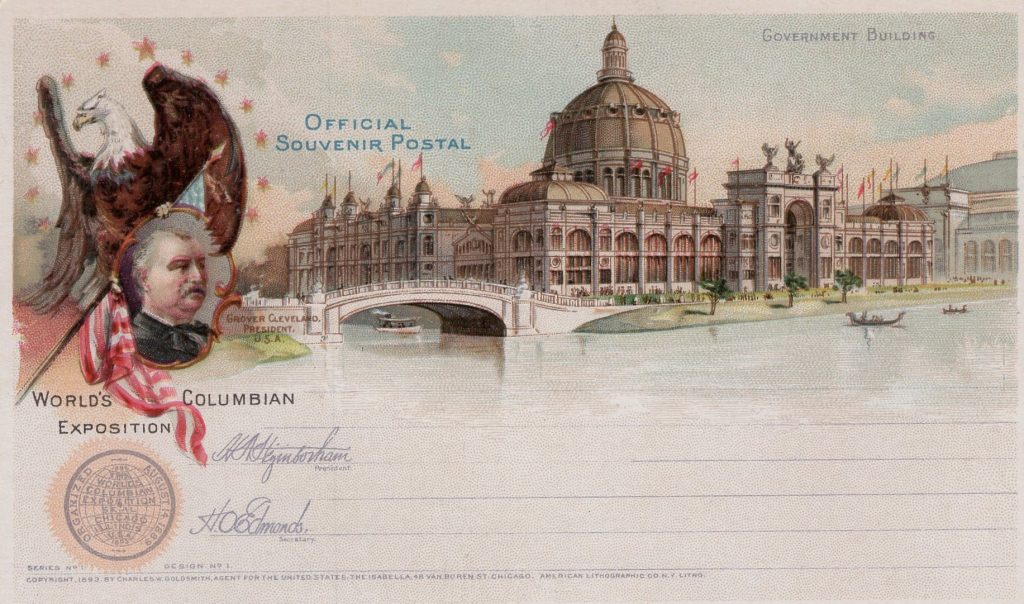 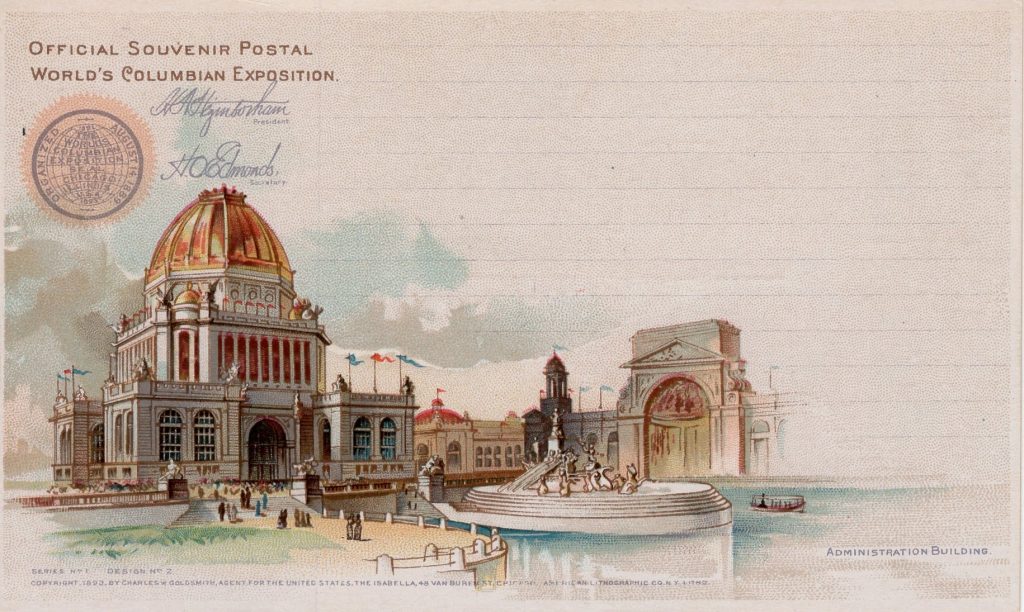 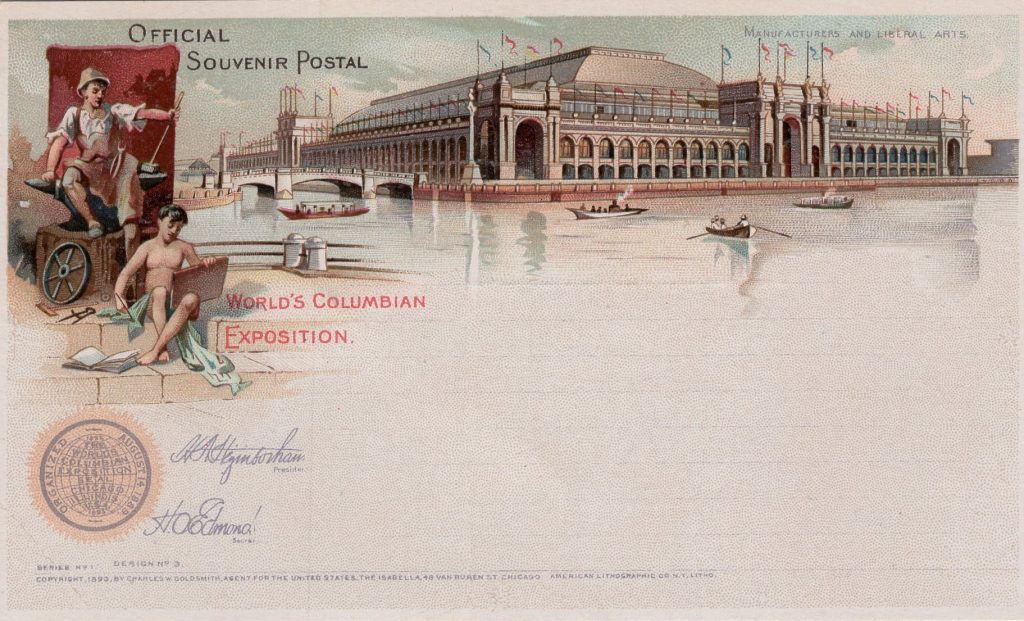 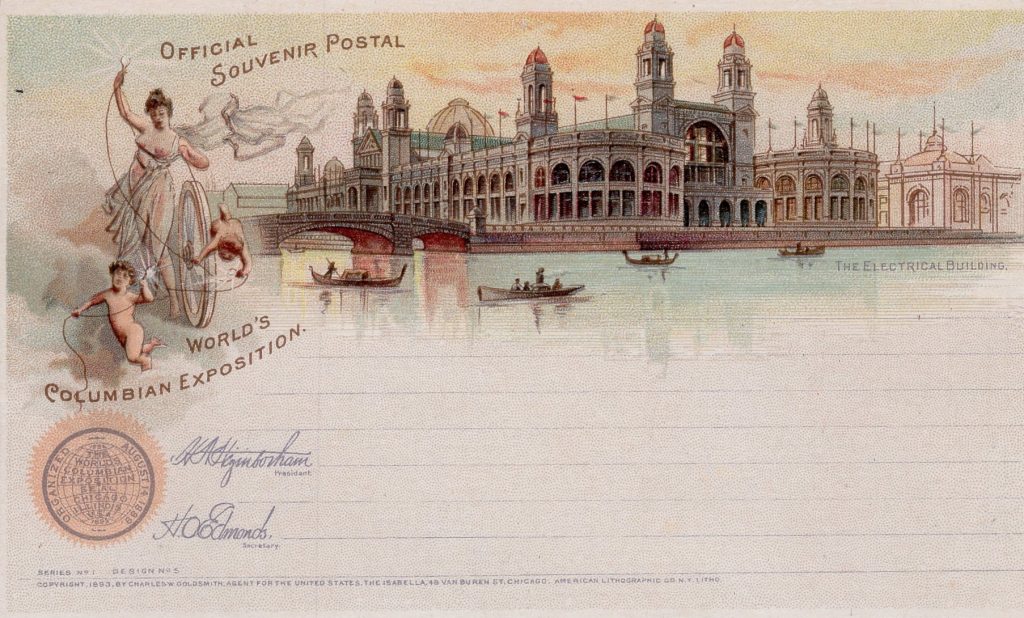 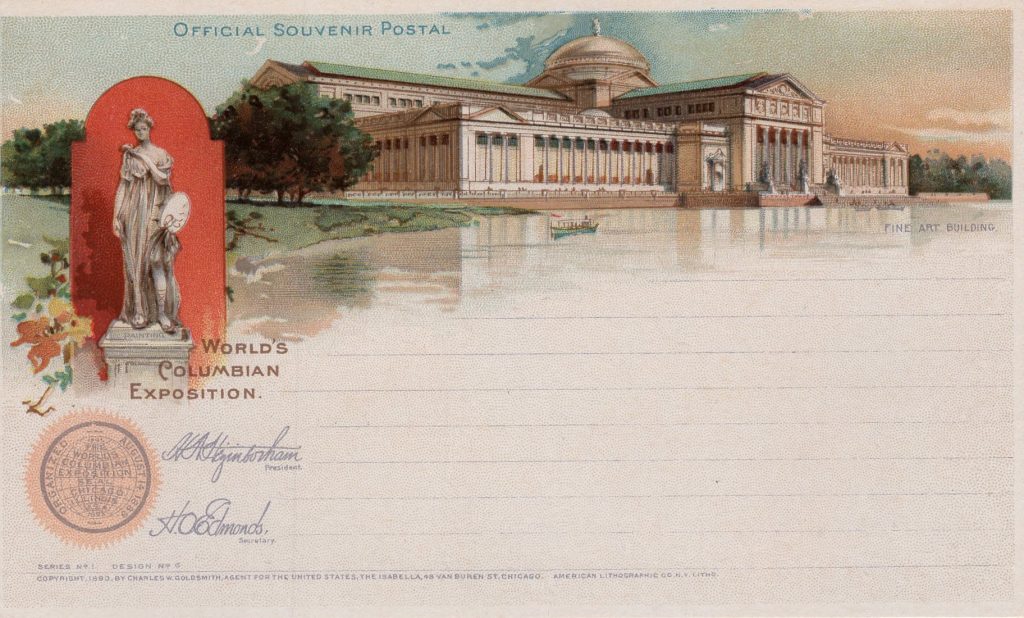 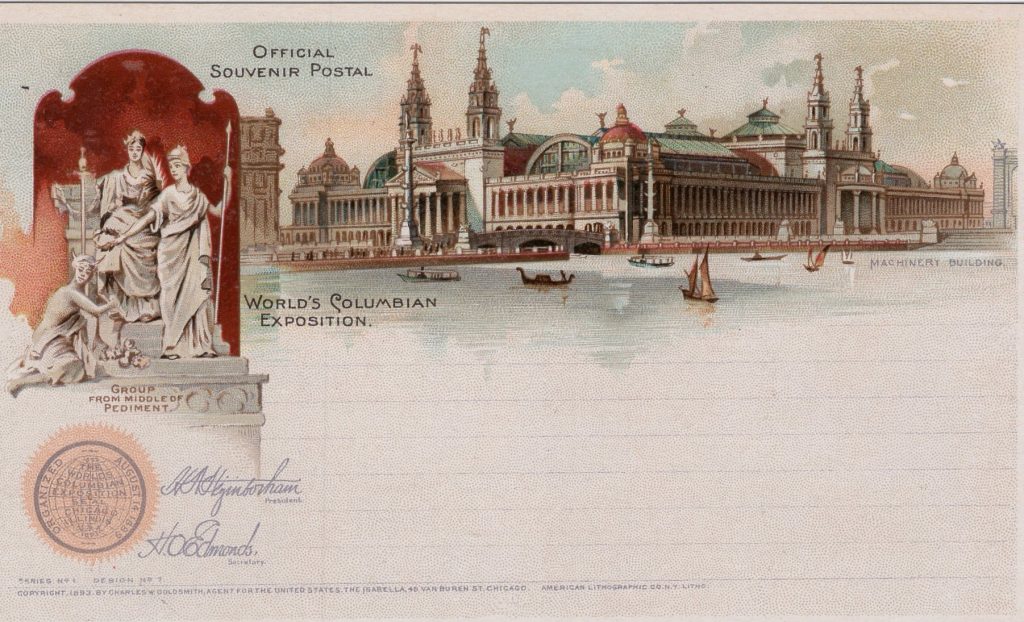 There are many varieties of these cards printed by Goldsmith. Some do not have the official seal while others have text in various places as well as images moved around.  The earliest recorded use of these cards is May 22, 1893.

Tony Crumbley has been a collector of stamps and postal history since childhood. He has authored numerous articles over his career as a philatelist. He is the current Co-Editor of the North Carolina Postal History Journal, a job he has had for over 25 years. He is a General in the Civil War Philatelic Society where he served as president. He lives with his wife, Renea, in Charlotte, North Carolina, and is the retired Vice President of Research for the Charlotte Chamber of Commerce.
PrevPreviousPostcard History-First Sunday Mystery Card-August 2021
NextOmaha’s Blackstone Hotel-A History and MysteryNext
7 Comments
Oldest
Newest Most Voted
Inline Feedbacks
View all comments
Howard

What a wonderful collection of postcards! Learned a lot. Thank you.

Excellant Postcards,I am sure they must be well worth collecting,have seen some of them for sale
at postcard fairs over here

The history behind this set of postal cards, the vending machine, and details on sales, is all so interesting. I plan to share this article with my neighbor. This cross over from philately to postcard collecting, or deltiology, is how many of us kind of slipped into collecting postcards. Thanks very much for a mighty fine article.

One of my prized possessions is a part of a program for the Exposition. Although it’s in terrible shape, the fact it was discovered in my grandmother’s basement as she was moving out of her longtime home makes it priceless to me.