[The Sho-Gun, a 1904 Broadway comic opera was a tale of an American Chewing Gum salesman in Korea. When his work was done and he achieved his goal in Asia, he went home to Iowa. Don’t ask why?]

A comic opera is a musical play usually with light subject matter or a comic nature.  It generally has a happy ending and often includes spoken dialogue. This is a good description of the basic template of The Sho-Gun. George Ade was the author and Gustav Luders the songwriter. Ade was a well-known American writer, syndicated newspaper columnist and playwright.

The Sho-Gun was produced by Henry W. Savage and ran for 125 performances from October 10, 1904, to January 21, 1905, at Wallack’s Theatre in New York City. It also toured other American cities.

A set of five remarkably vivid postcards from this long-ago production accompany this article. The postcards, together with a 1904 newspaper story about the play’s plot, a list of the cast of characters, and some sheet music, provide a real sense of this theatrical production.

The postcards were given away in theatres, and feature publicity photos taken by Joseph Byron (1847-1923), an English photographer working in New York City who specialized in stage photography. By using as many as eight flashlights set off in sequence for a second and a half exposure, he created many lively and memorable onstage photographs of performers.

The play is set in Ka-Choo, an imaginary secluded Korean island in the Sea of Japan.  Ka-Choo is ruled by Flai-Hai, the Sho-Gun (a kind of hereditary military dictator in Japan from 1192 to 1867), who lives in the forbidden city there. At the start of the play Flai-Hai is on a pilgrimage to China to pay his respects to his ancestors. One day a high-spirited American financial promoter, William Henry Spangle, arrives on the island seeking a royal pedigree to befit the fortune he has made in America. At the same time Spangle is setting up placards at shrines and temples advertising “Spangles Goo-Goo chewing gum.” Over the course of the two-act play this energetic ambassador of American commercial expansionism manages to take over all the property on the island as well as marrying Omee-Omi the widow of the former Sho-Gun.

When Flai-Hai returns from his pilgrimage he is infuriated to discover this revolution and upsetting of traditions which has taken place in his absence. He also hears of the invasion of American sailors and marines who believe they are coming to rescue Spangle.

The Sho-Gun sentences Spangle to death, but on a sign from Spangle the executioner’s union refuses to carry out the sentence, since Spangle also controls their group. Flai-Hai then abdicates when he finds he is powerless. The American forces successfully attack the forbidden city and are amazed to discover that Spangle is in absolute possession of Ka-Choo. The play climaxes with the deposed Flai-Hai presenting Spangle with a certificate proving he is of royal birth. This happy ending finishes with Spangle turning over his large assets in Ka-Choo to Tee-To, a bachelor there, and Spangle, escorted by the American forces, returning to his native Iowa. 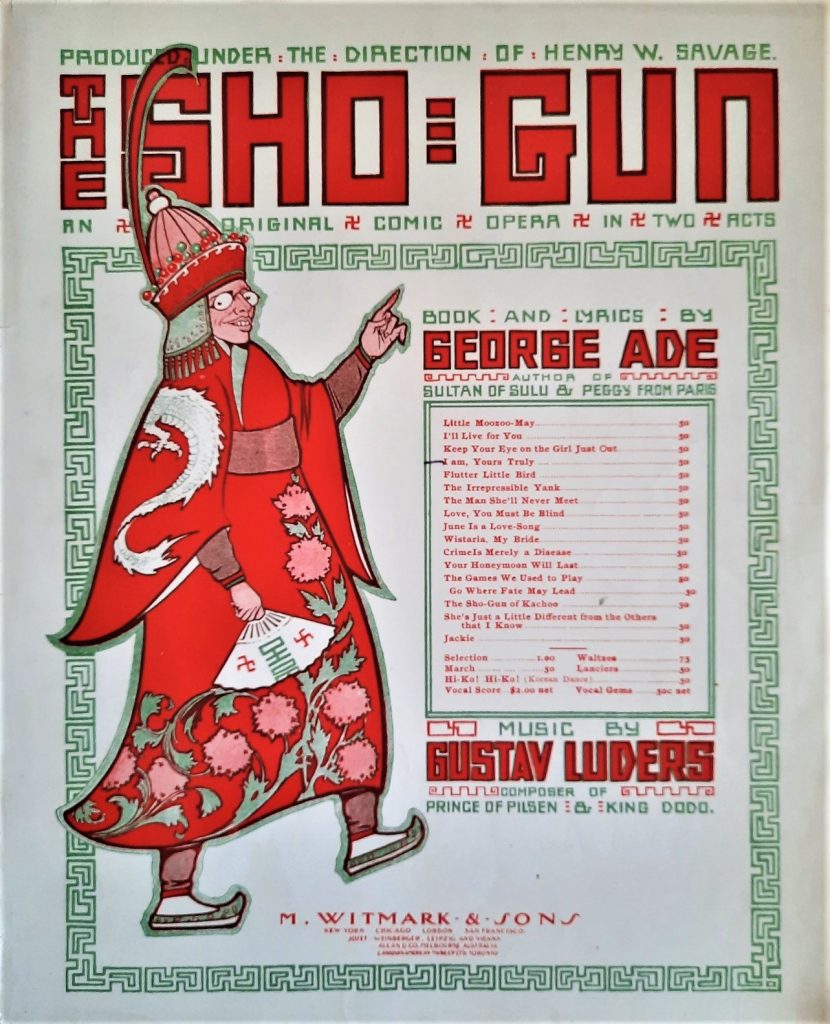 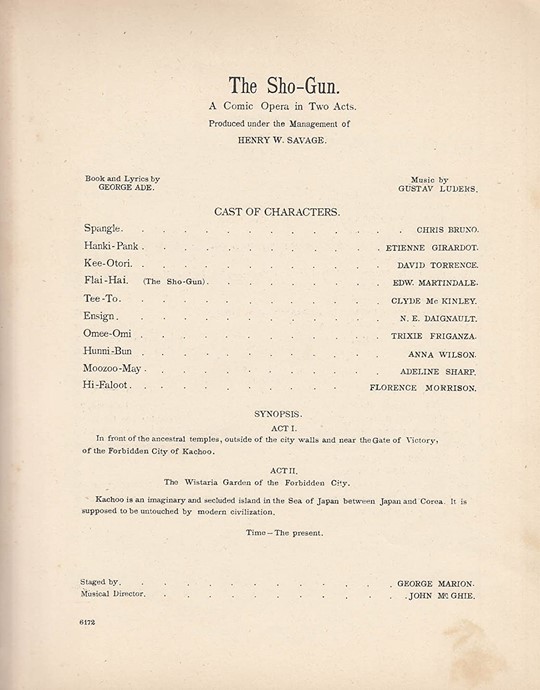 Cast of characters for The Sho-Gun. 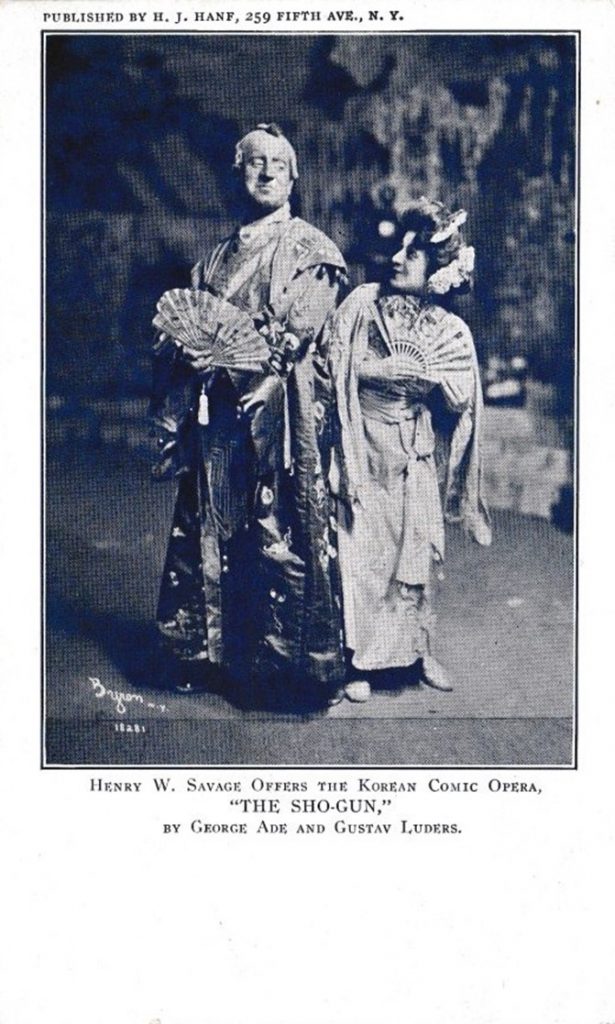 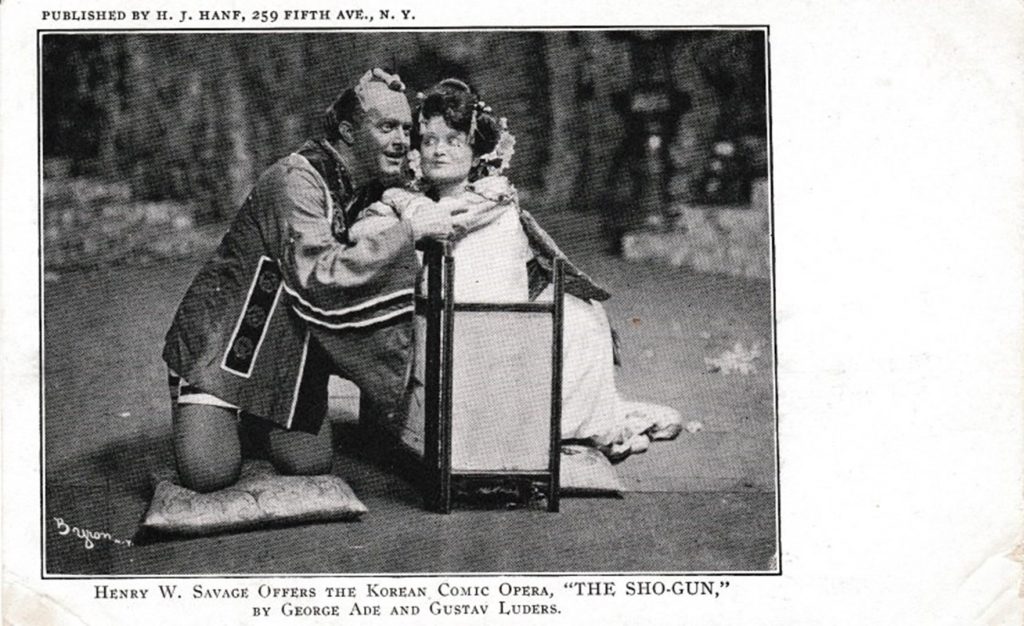 This courting couple deep in flirtation appears to be Tee-To and Princess Hunni-Bun at the Temple of the Ancestors. She is the niece of the Sho-Gun, and her head is full of romance. She has been secretly exchanging messages with Tee-To, and Tee-To has fallen desperately in love with her. This scene may be the first time that they have actually met. In Ka-Choo society the bachelors are despised and shunned until they take a wife. 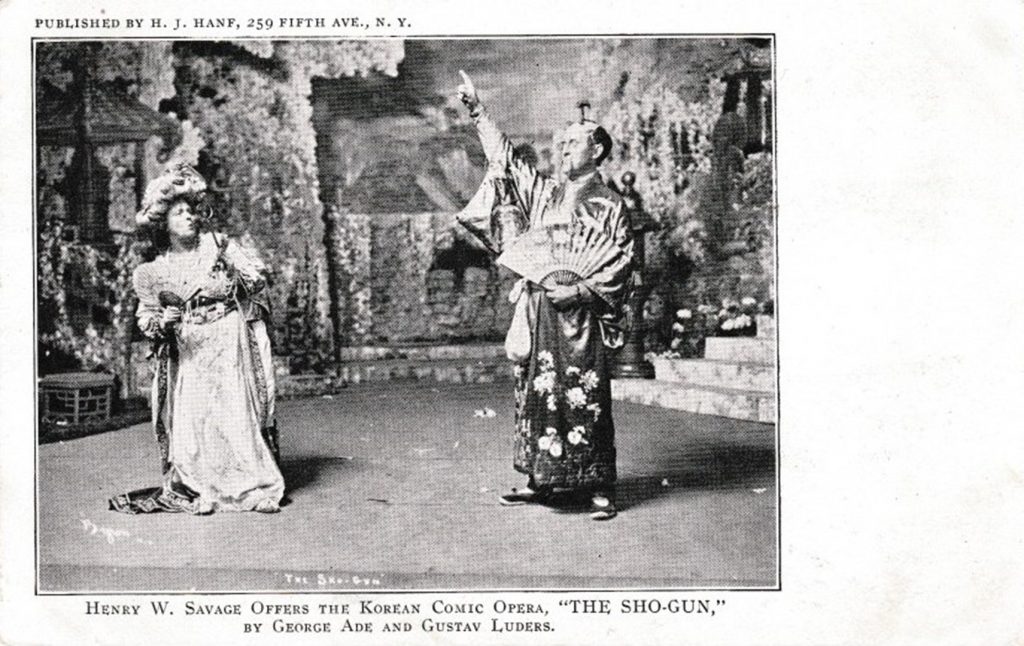 Tee-To and Princess Hunni-bun are discovered together, and they are both made prisoners and sent away to await the Sho-Gun’s judgement upon his return to Ka-Choo. This scene may be of the court astrologer Hanki-Pank sending Omee-Omi the former Sho-Gun’s widow or Princess Hunni-Bun away from the Temple of the Ancestors. 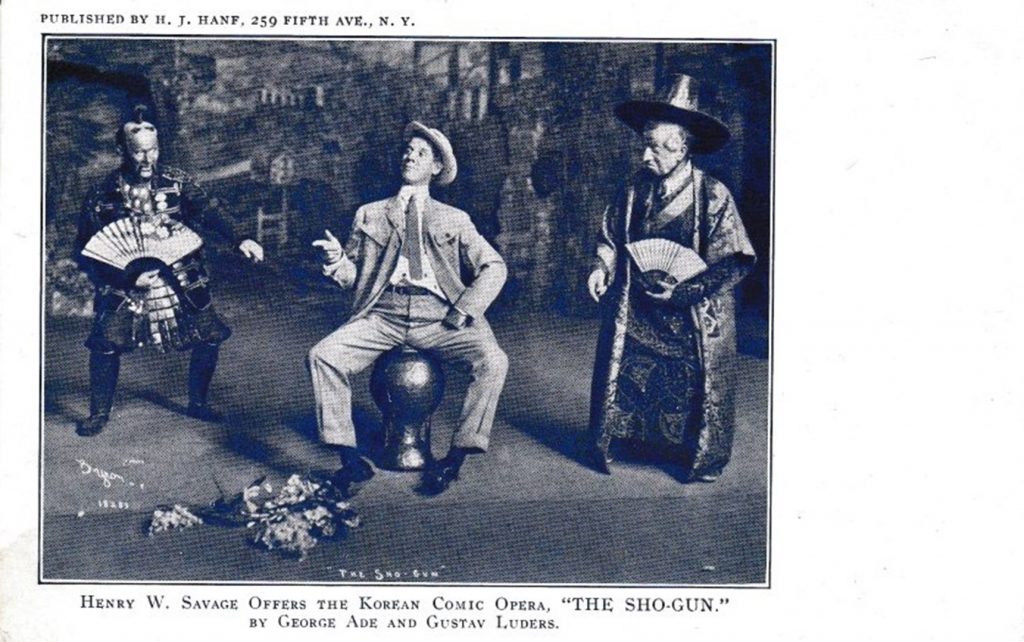 In this scene Spangle appears tobe confidently dismissing Flai-Hai’s (on Spangle’s right) death sentence on him. To the left of Spangle is Hanki-Pank, who is now Spangle’s attorney. It is probably at this point that Flai-Hai finds he is powerless to rule Ka-Choo and he abdicates 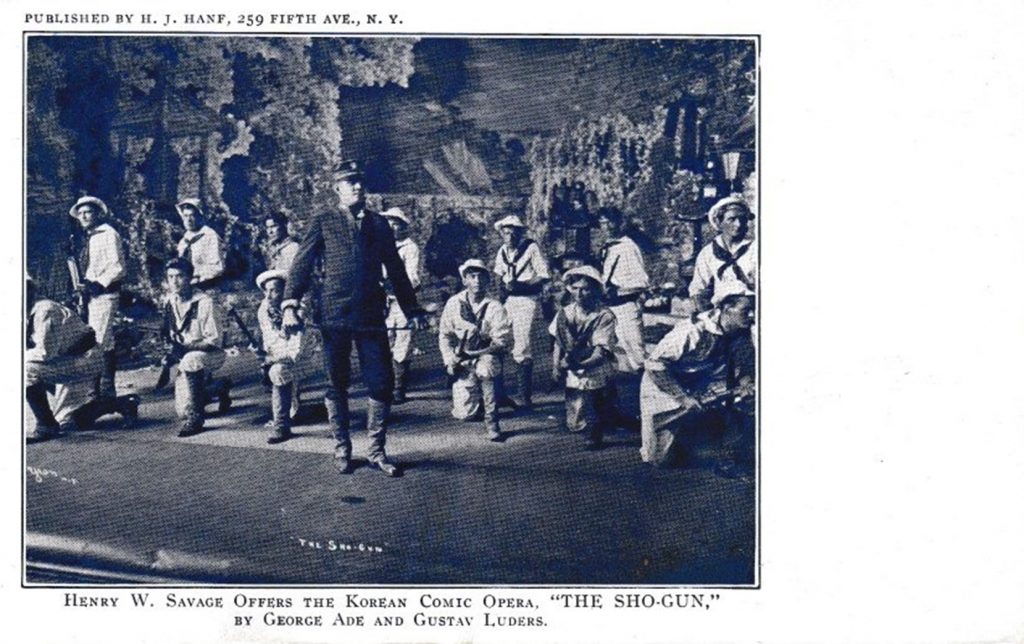 In this last postcard, the American sailors and marines that Ade called “Jackies” (or “Jack Tar” which by World War I was a nickname for those serving in the US Navy) handsomely stand at the ready, but it is hardly necessary. One can easily imagine Semper Fidelis, the Marine Corps march by John Philip Sousa (1888) playing in the background of this scene.

The Sho-Gun certainly had both charm and a simplicity that disarmed the critics. It was just one of many comic operas in the early years of the new century with an absurd formula plot set in a far-off place.

Eventually these comic operas gave way to the work of such persons as George Cohan, George Gershwin, and Richard Rodgers and Lorenz Hart who would transform American musical theater and move it to a more serious and vigorous style.

Kyle Jolliffe lives in Toronto, Ontario. For more than twenty years he has been an avid collector of New York City postcards from the pioneer era to the 1970s. He has given presentations to Southern Ontario postcard clubs on the stories they tell of this great metropolis and the other stories they lead to.
PrevPreviousColorado’s Garden of the Gods
NextThe Bees, their Honey, the Moon + Love & Marriage = HoneymoonNext
3 Comments
Oldest
Newest Most Voted
Inline Feedbacks
View all comments
Bob Kozak

I live in Lafayette, Indiana, near Purdue University’s Ross-Ade Stadium, which is partly named for George.

I can hardly wait to hear the revival of this performance! Thanks for bringing this rare set to life.

What fun you have had in building this series of postcards…KNOWING what you were looking for and probably the Sho-Gun play, along with other productions as well. I am reminded of the book lists that Andreas Brown issued for postcard collectors at the Gotham Book Mart. He titled the book lists, “Knowledge is Power.” Thanks very much.