Many of us think about the 1950s as a period of innocence and national consensus, when the patriarchal wisdom of hit TV programs like Father Knows Best and Leave it To Beaver went unchallenged, when the Ed Sullivan Show represented the full range of entertainment options, when sexual roles and norms tolerated no experimentation nor deviation from what was considered normative.

In truth, the 1950s and early 60s also had a raucous, risqué and riotous dissident underside – some of which is preserved in picture postcards of the era. Before Wigstock, before Ru-Paul, New York nightlife made room for Club 82, a place that celebrated gender non-conformity, transvestites and gay culture. 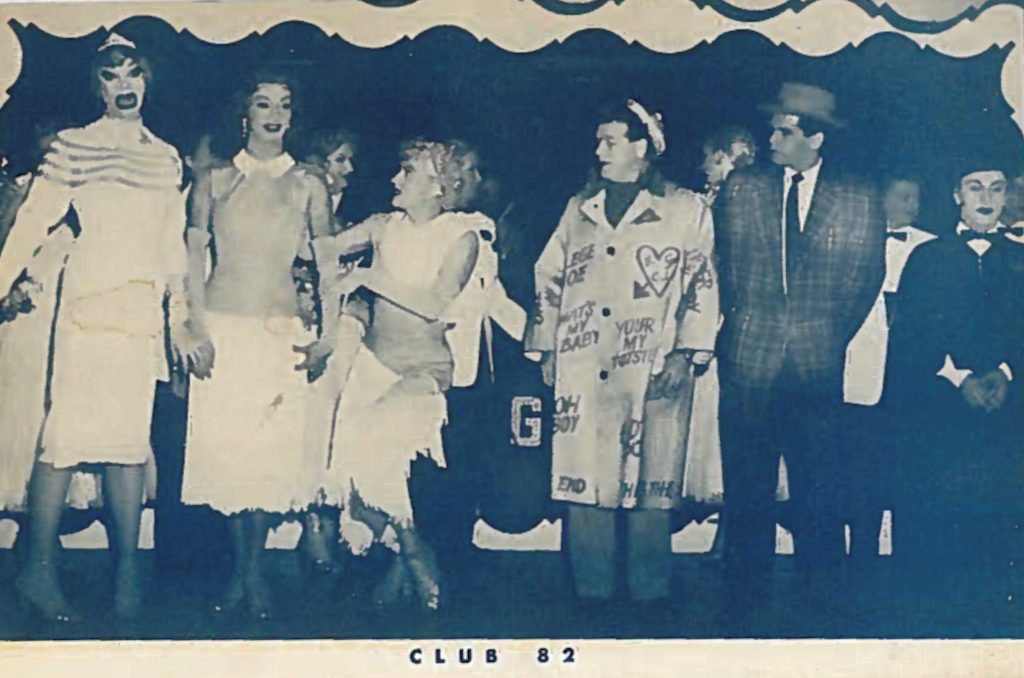 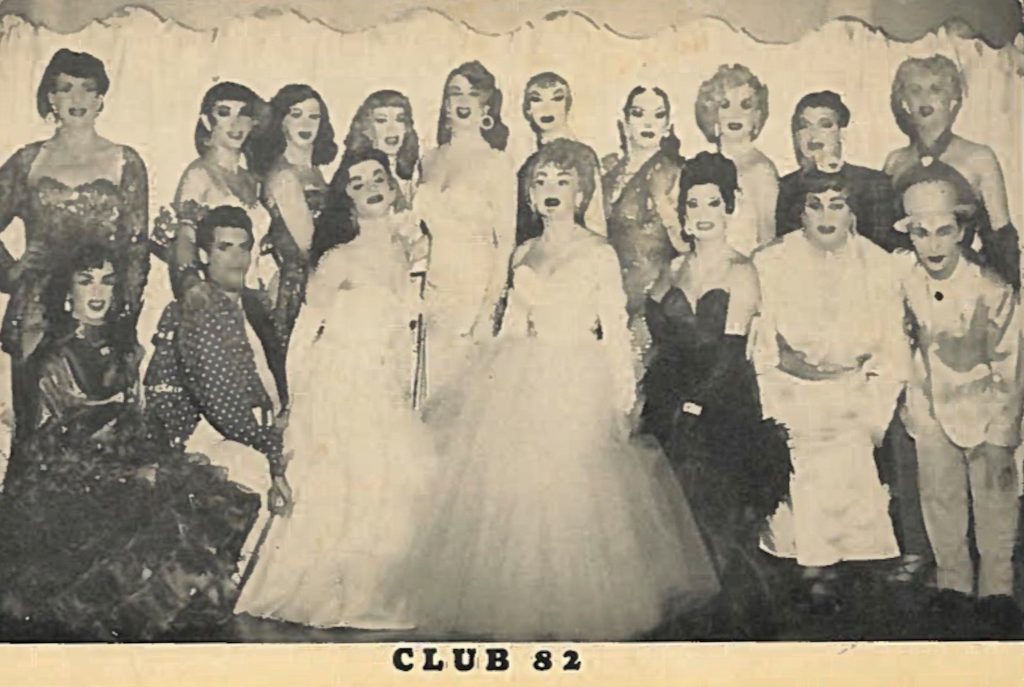 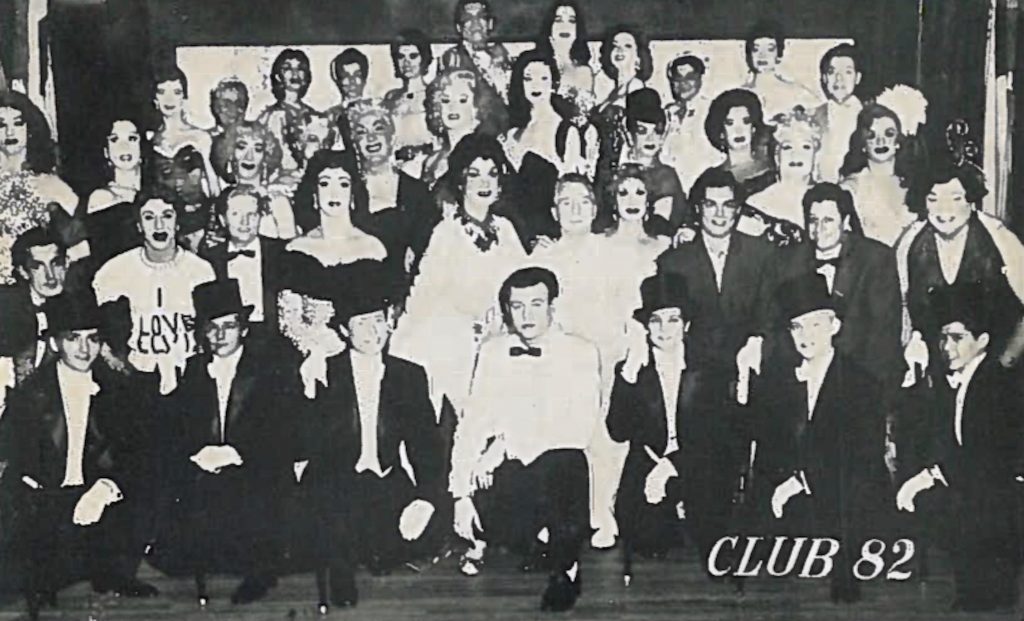 Moving past a discreet sign at 4th Street and 2nd Avenue on New York’s Lower East Side, patrons would descend down a long, steep, narrow staircase at the end of which they would enter a glittering subterranean ballroom. The greeters and the waiters seemed like handsome, barely out of adolescence, young men. They weren’t. It was where the gender play began.

For a time, presiding over this gateway, was the engaging Anna Genovese, wife of Mafia Don Vito Genovese. Several gay-oriented night clubs, along with the heroin trade and the numbers racket, an illegal lottery, were the mainstays of the Genovese business empire. Anna’s lesbian proclivities drove her to work at Club 82, where she could be close to several ladies with whom she had relationships, a fact which enraged Vito and eventually led to their estrangement.

All the goings-on at Club 82 at that time were strictly illegal under the federal statutes and the laws of New York State. Payoffs of $1,200 per month to local police took care of too much scrutiny. Furthermore, souvenir tableside photos in decorated cardboard frames, souvenir programs and photo postcards created a veneer of normalcy and respectability as did occasional visits by celebrity patrons like Liz Taylor, Judy Garland, (both of whom later became huge icons for drag performers), Salvador Dali and Frank Sinatra. Stars and acts often gained notices and reviews in the entertainment press by celebrity-stalkers like Walter Winchell. 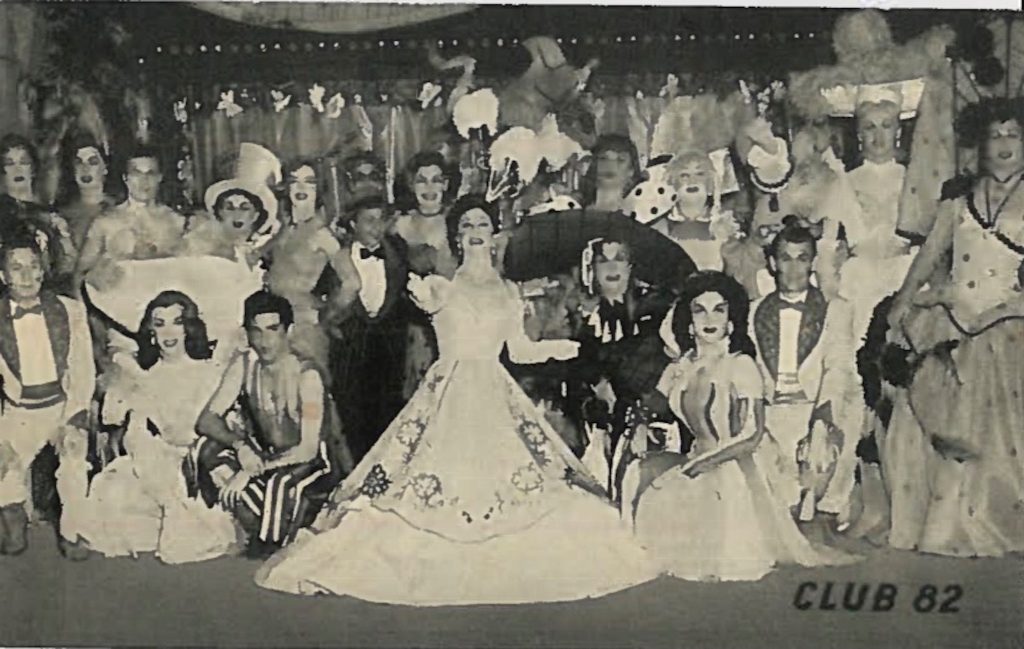 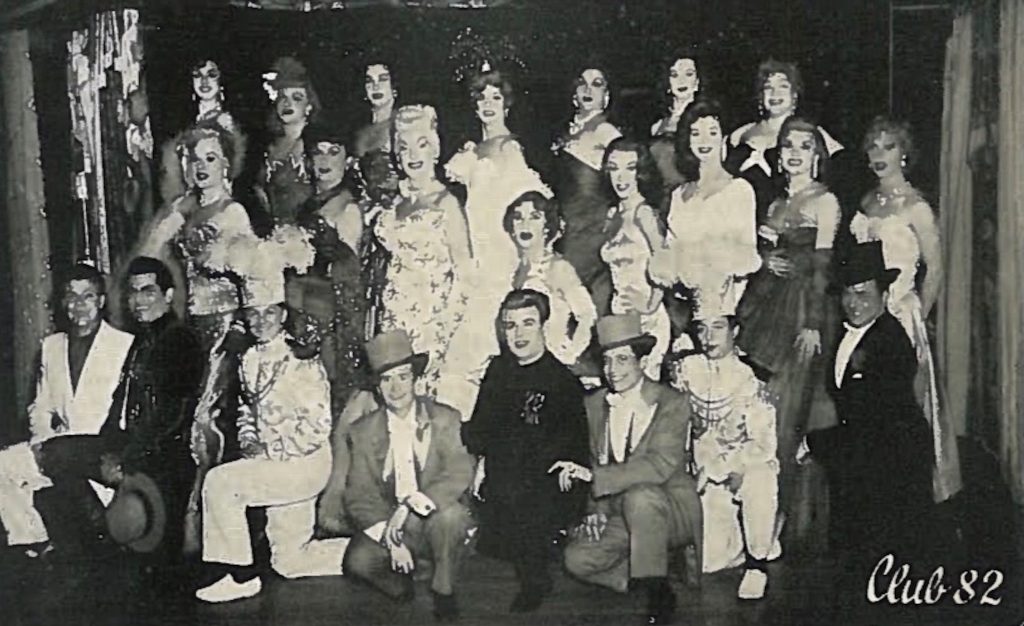 Although the staff and performers were largely gay, the audience was decidedly straight – urban and suburban middle to upper-class couples seeking an evening of sophisticated voyeuristic entertainment. No one was coming down to express or have a confrontation with their own sexuality. The rules of social distancing allowed them to gawk but not touch. When the drag queens performed, it was under a more euphemistic frame of reference, what today we might call a hetero-normative context, and called “female mimic” or “femme impersonator.”

The nightclub space itself was elegant, “decked out in the height of mid-century kitsch,” writes the New York City Historical Society, “mirrored columns, plastic palm fronds, elaborate banquettes, and white tablecloths.” Audience members knew that things were different when they were discouraged from applauding – “It might disturb the neighbors” – and, instead, given small wooden clap sticks to bang lightly on the table. 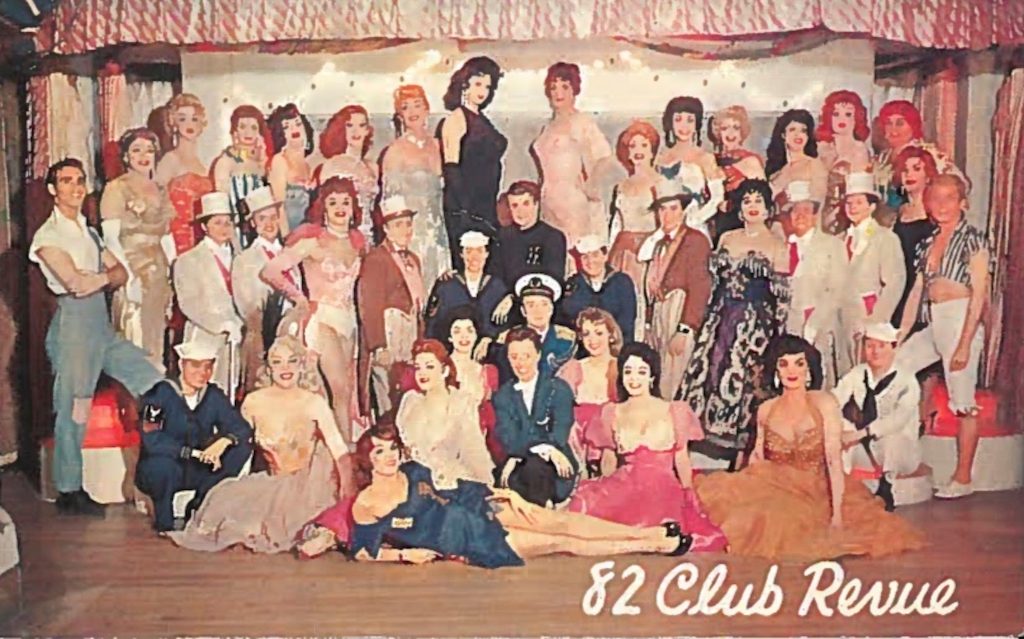 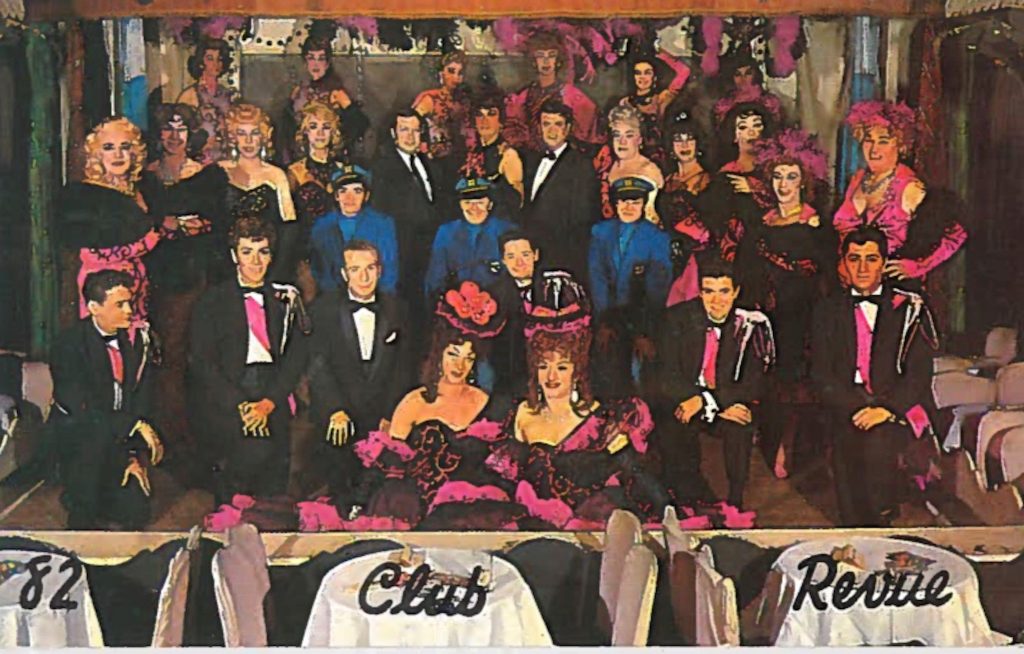 Highly choreographed performances ran like clockwork three times a night – 10:30pm, 12:30am, and 2:30am – to the sweeping tunes of orchestra leader Johnny Wilson. The drag queens were decked out in glamorous costumes by designer John Wong. The shows were directed and produced by Kitt Russel, whose Broadway experience and acting skills were considerable. The programs were organized around regularly changing themes and acts, for example, “A Vacation in Color,” ”Let’s Go Collegiate,” “Up In Central Park,” “Far East Fantasy,” “Beatnik’s Holiday,” and “Can’t Do A Show Without Girls.” 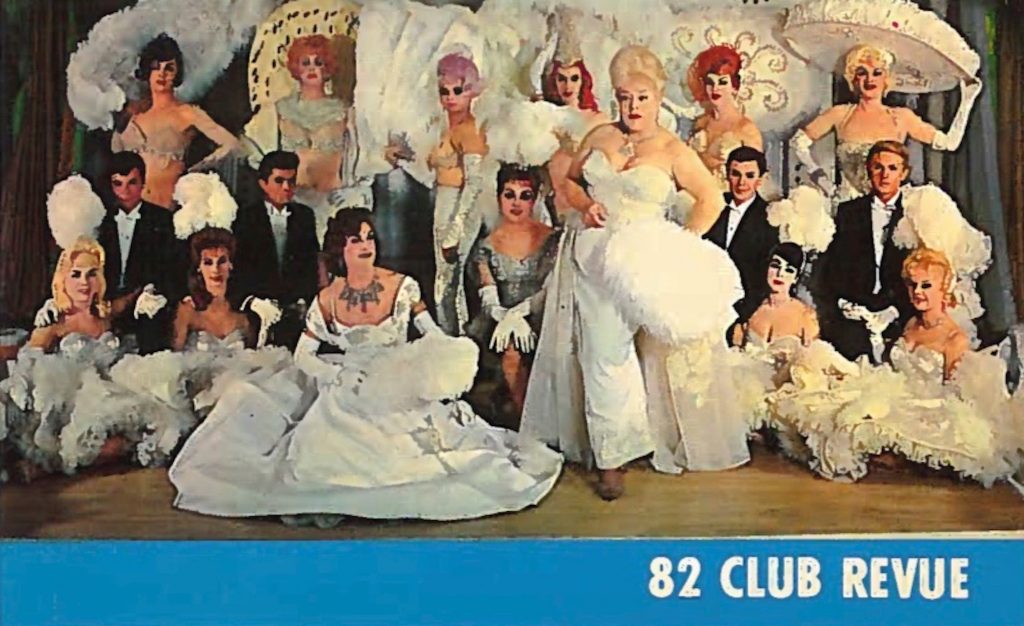 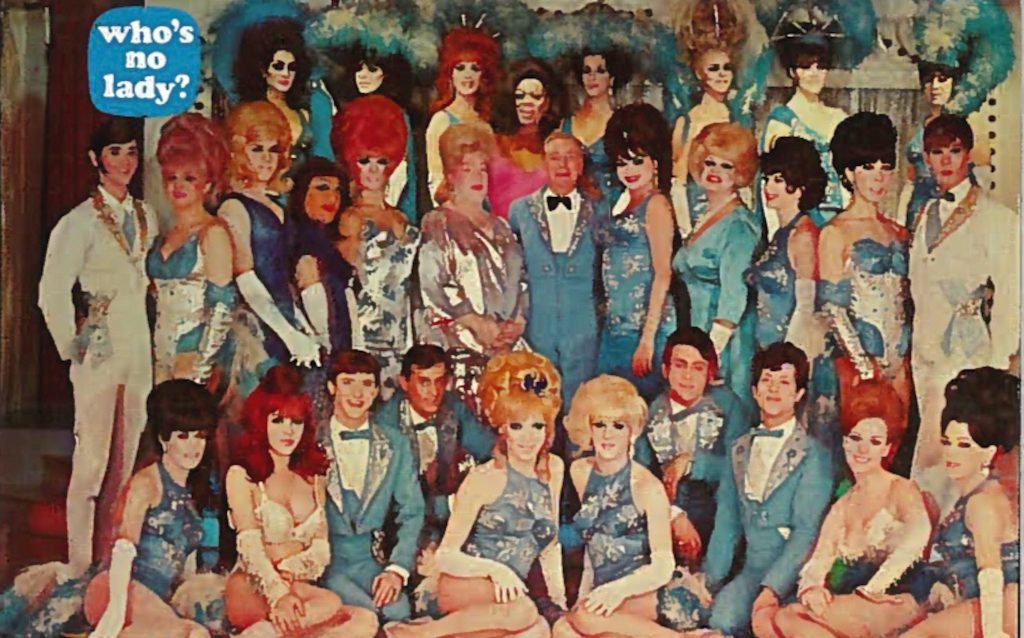 As the 1960s progressed, gays grew more disenchanted with their status in society and increasingly wanted to come out of the closet, indeed shatter the closet in an effort to achieve normalcy on their own terms. One particular area of dissatisfaction, a consequence of having made gay lifestyles illegal, was the vulnerability many experienced to arbitrary action by corrupt police forces, who could subject them to arrest, exposure, financial penalties and blackmail. The connection between gangsters and gay life was an obvious contradiction behind this vulnerability.

This all came to a head in the early morning of June 28, 1969. The Stonewall Inn a property on Greenwich Village’s Sheridan Square had changed its format in recent years from a neighborhood eatery to a gay-oriented bar with a two-story dance space on its upper floors. Something went amiss that morning during what should have been a routine police raid on another illicit nightspot owned by the Genovese mob. Nobody was sure what created the spark, maybe the watered-down drinks, a breakdown of the plumbing system, possibly the way that trans customers were treated during rude inspections of their genitalia. In any case, the Stonewall patrons didn’t just line up and present identification as expected. They fought back and rioted during the next several days.

Like the Alamo and the Fort Sumter Attack, the Stonewall Rebellion was a catalyst that stimulated further activism on behalf of gay equality. There was no going back to ideas that were now deemed archaic. Mob-protected representations of gay lifestyles for the amusement of straight audiences were among the relics of closeted gay culture that suddenly seemed outdated. Club 82 ended the drag performances and evolved into a show space for progressive rockers.

You – both text and the postcards – bring back an era. I (as a young guy just moved from family nest to a Lower E. Side walk-up) passed by Club 82 regularly and also walked downstairs to check it out. Too shy to stay long.

Fabulously interesting! Who knew that the mob had a double act as trend setters for gender outlaws in the theatre of playful sexual transgressions.

I enjoyed these disclosures (photo postcards and your text) so very much. I had no idea of these goings on but I had a gay cousin who had a very unhappy life during those times. I miss him so much. The biggest surprise was not the illegal parties but the relationship of these to the Mafia. Wouldn’t have expected that pairing, although they were certainly willing to take up any resource to increase their power and wealth. I remember the Stonewall Rebellion very well. It was a groundbreaking event even for 1969 on the cusp of the sexual revolution. Thanks,… Read more »

Another great article! Although obviously aware of the existence of gay nightlife in NYC since colonial times, l was surprised that there were postcards! And a mafia momma to boot! Ya learn something every day. Thanks for bringing a smile in these troubled times.

Not to be forgotten; The Boybar shows on St. Marks Place, continued the tradition in the 80’s and early 90’s !!!! . They were billed as, Matthew Kastin presents …. With such regulars as Conny Girl, Miss Glamamor, Cody Ravioli, Princess Diandra, International Crisis, Perfedia, Lipsinka, Heda Lettice , Lady Bunny – to name several . They were unbelievably inventive and Hilarious. IMHO Rupaul was the a kind of cleche stereotype that signaled the end of really great drag in. NewYork

I wonder how often two customers who were both known to be rabidly anti-gay ran into each other at Club 82 and were each simultaneously tempted to “out” the other and fearful of being thus exposed.

I read this and then come back a few days later and read it all again. I knew next to nothing of all of this dancing and prancing and having fun. There are nine different postcards illustrated here..WOW. They are interesting to look at, from the earliest to the later ones. Imagine stepping down the two floors of stairs into this neverland, where it was the custom not to applaud, but to slap wooden clap sticks on the table instead. Who ever heard of such a thing? That is wild. I first checked Ebay for Club 82 postcards and found… Read more »

My mother and father-in-law took my wife and I to Pinocchio’s in San Francisco to help calibrate my 21st birthday! It was fun but quite an eye opener!

Thanks for the New York history. All was new information to me.

The 82 club was the place to be in the 70’s! David Bowie would hang there, Kiss, The Ramones and yes..alot of drugs but I’m still here to talk about it! Great memories!!!!

Let’s not forget OUR underground Playground, what a place, seen it ALL. ALL FOND MEMORIES. DONNY.