Herschel Logan
and the Brookville Hotel:
the Rest of the Story

Previously on Postcard History . . . at the end of an article about the Old Central Hotel in Brookville, Kansas, your editor wrote:

I am mesmerized by this piece of art; the proportion is perfect, the line is exact, and the inking is faultless. So much so, that I will continue this piece in a future issue (Wednesday, September 15th) at which time we will examine the last 70 years of the hotel’s history and the art and talent of Herschel Logan, Kansas artisan.

As promised, today we present what Paul Harvey called, “The Rest of the Story.” Previously presented was what we thought to be a one and only postcard of the Brookville Hotel. That was wrong. When we make a mistake, we admit our error, the truth is there are two postcards of the Brookville Hotel. They are very similar, and we are proud to present the second card to you with the help of our friend Hal Ottaway.

Here presented side by side are the two cards. I’ll leave it to you to discover the differences. 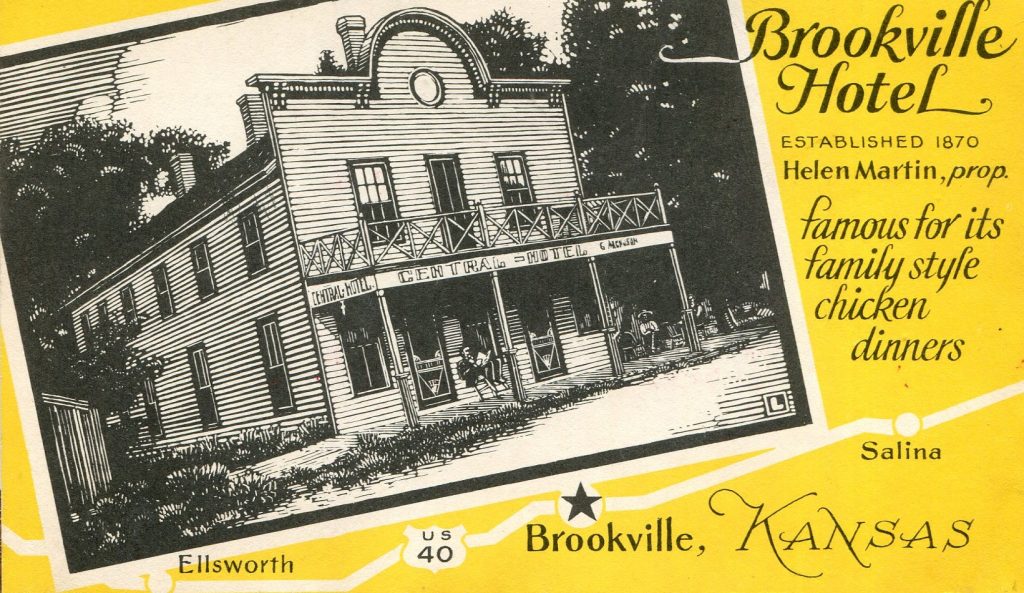 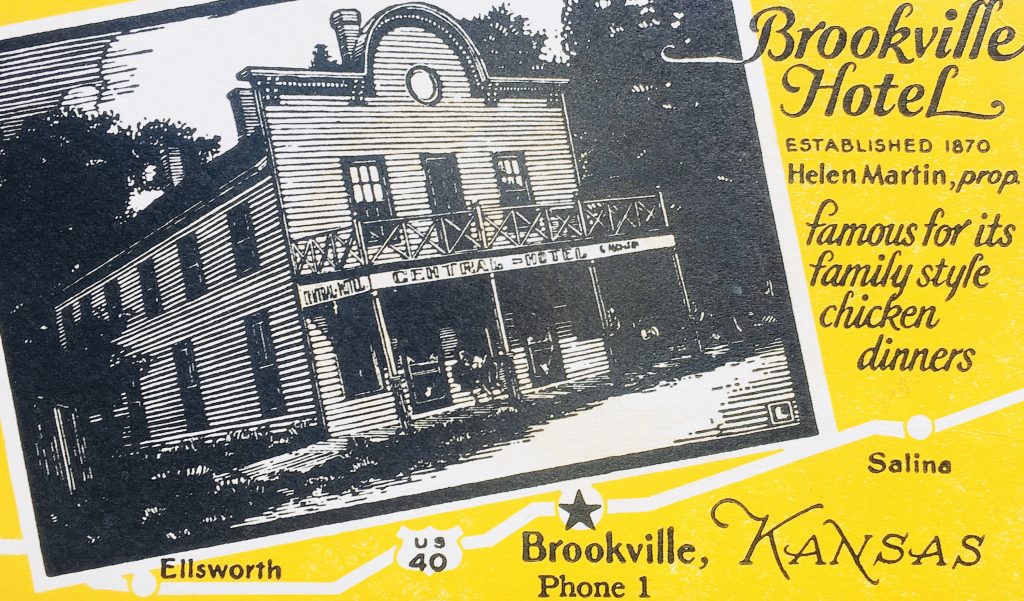 If you missed the article and would like to read it, go to the Archives (just to the right of “News and Noteworthy,” on the Postcard History homepage, click on September 2021, then look for the September 9th article. Click on Read Whole Story and you have turned back the clock.

The memories (that prompted some comments) this article triggered must have been many, but one seemed very personal, please indulge a reiteration here:

It is hard to see this postcard without thinking of their heaping platter of fried chicken, bowl of cold slaw to die for, mashed potatoes and gravy, a bowl of creamed corn, hot biscuits and strawberry preserves … all served in Family Style, and that means when the bowl is empty a fresh one is brought to the table and passed around and around … oh man, this is Kansas home cooking. Dessert was home-made ice cream, one dip as I remember it. This is the meal that we looked forward to and why we returned many times through the years. Here is where we celebrated my parent’s 50th Wedding Anniversary.

In Postcard History’s earlier article, we told the story of the town, the Magnuson family and the force of nature that Helen Magnuson Martin was in making the hotel such a success. The military lads stationed at nearby bases and locals alike, sang their praise of the Brookville Hotel. It was a happy place. “Out to dinner” in those days were special events that happened a few times each year and were fondly remembered. Certainly, not like today, when your home “kitchen is closed” at least twice every week.

The Brookville continued to serve their guests faithfully for the many decades after World War II. As is always the case there were rough spots, but the clientele was forever loyal. Currently the future of the Brookville is cloudy. The reason may be stated in one word: Covid. Keep track of what is happening; there is an Internet presence: Google “Brookville Hotel.”

The artistry of the Brookville postcard is so good that no photograph could better illustrate the existence of the hotel. This postcard history lesson is meant to introduce the artist.

As the twentieth century began, more and more American families chose to move west. Such was the case with a Kentucky family headed by Oliver Logan. Not long before the birth of their only son, the Logans moved to Magnolia, Missouri. Herschel Carey Logan was born on April 19, 1901.

Logan spent the rest of his childhood on the prairie and developed a lifelong love and appreciation for vignettes showing small homesteads on the plains.

His mother died less than a year after his birth. In 1903, his father took the remaining family, including grandparents, to live on a farm near Winfield, Kansas, but later settled in Salina.

Herschel’s early years at school found him with art pads and sketchbooks under his arm and a pocket full of pencils. He was a good student, and while in high school he became a self-motivated cartoonist for the school newspaper. After graduation, he studied art at the Chicago Academy of Fine Arts. It may have been that he was destined to be an artist and an artistic project manager.

Upon his return from Chicago, Logan became a commercial artist for the McCormick Armstrong Lithography Company in Wichita. Too many minor distractions occupied his time at McCormick, it was art he most enjoyed. When he was offered a position at the Consolidated Printing and Stationery Company in Salina he accepted the job and soon became the corporate art director – a job he cherished for 37 years.

Some may remember Herschel Logan as the creator of “The Colonel,” a cartoon character that was the mainstay of all Consolidated advertising for nearly four decades. The cartoons were often thought to be ephemera but in 1960 the university librarian at Kansas State entered an agreement with Logan for the sale of his 500-piece collection. Today Logan’s personal copies of his cartoons are part of a Kansas historical research project in Manhattan, Kansas.

Mr. Logan was a well-respected and much appreciated member of the Kansas community. He  was active in the Rotary Club, the Salina Public Library Board of Trustees, the local Chamber of Commerce (he served for a time as a president of the C of C), and the Salina City Planning Commission.

Much of Herschel Logan’s own art appeared in Consolidated’s work product. The postcard featured in this article is one such piece. Logan was the artist responsible for the ink drawing of the hotel.

In his retirement years, Logan often chose to be involved in Kansas politics as a campaign artist. Postcard History is pleased to share two postcard Mr. Logan did on behalf of the one term (1939 – 1943) governor of Kansas, Payne Ratner. 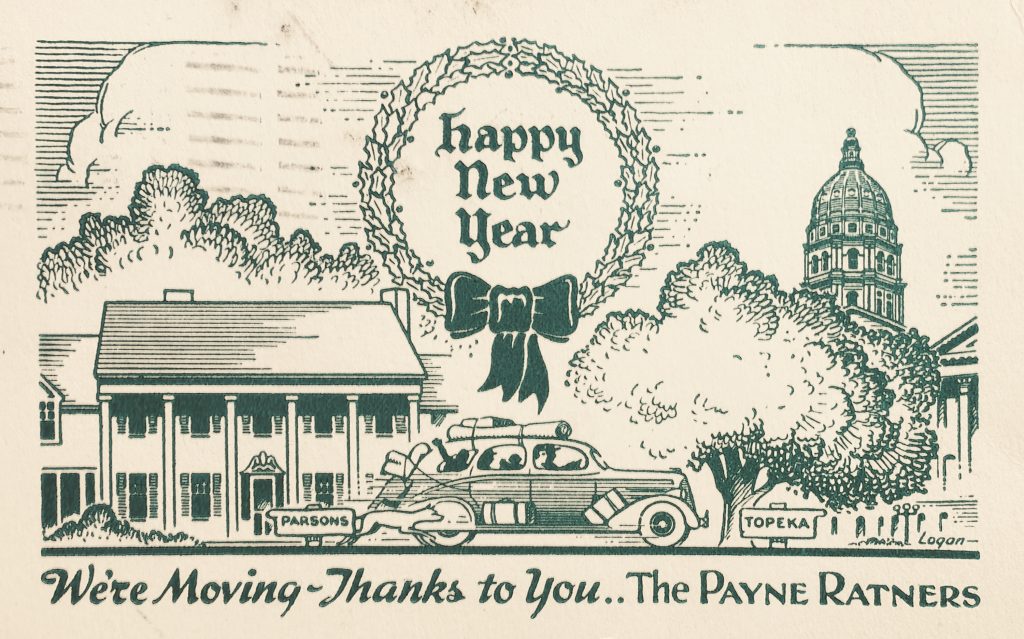 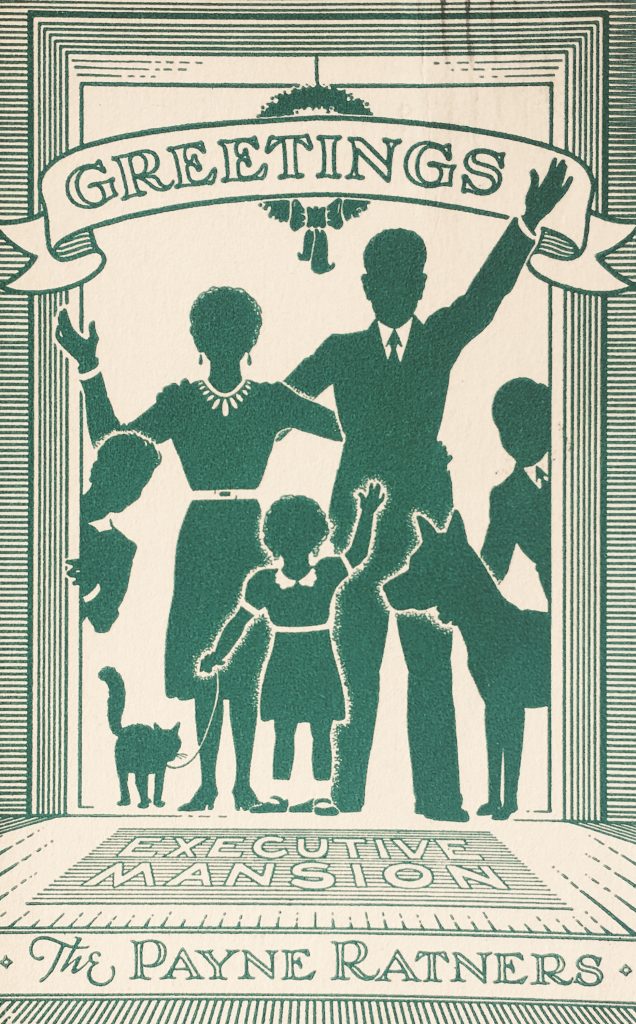 Outside of his business- and artistic-life there is another, very different aspect of Herschel Logan. As a young student Herschel developed a particular interest in firearms and hand-held weapons used during the Civil War. By the early 1960s, Mr. Logan assembled one of America’s largest and most authentic private collections of Civil War guns and sabers. (Oh, my Kansas friends would be disappointed if I failed to mention Mr. Logan’s collection of mustache cups.) Logan was often a lecturer in the Civil War Roundtable circuit as a noted collector and historian. 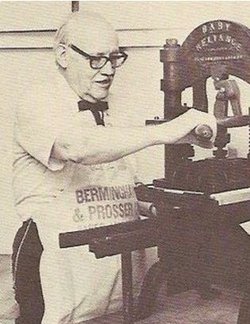 Herschel Logan died in Santa Ana, California, on December 8, 1987, age 86. He left behind his wife Anne, a daughter, and one son Samuel H. Logan,
who in 1962 joined the faculty of the University of California at Davis, as a professor of agricultural economics.

Ray Hahn is a retired educator, but he has never stopped teaching. His decades of researching, writing and editing a newsletter for the South Jersey Postcard Club has been a world-class education in trivia. In addition to postcard collecting, Ray’s other interests include history, genealogy, and touring the world with his wife Marie. Ray often advises his readers to "Join me as we explore the world one postcard at a time." Ray and Marie live in New Jersey.
PrevPreviousOne and One and One is Three
NextLester RalphNext
2 Comments
Oldest
Newest Most Voted
Inline Feedbacks
View all comments
Hal Ottaway

Thanks very much for the biographical information about the artist, Herschel Logan. He was one of the founding members of the Prairie Print Makers here in Kansas in 1930. This group helped to educate laymen about artists and to promote collecting their prints. The “friendly” prices at the time made it possible for average folks to be able to have an original artist signed piece of art in their home. Many from our area grew up in families with a Logan, Sandzen, Capps, or Seward print in their living room.

Love the car, with the dog running alongside, on the “moving to Topeka” postcard sent by the Ratners.