Peppermint Lounge:
Twistin’ the Night Away

Tucked away in a non-descript corner of the Times Square hotel and entertainment district, is not much of a bar that is too dark and narrow to appeal to patrons beyond the few gays that used it for furtive meetings. In 1962, the Peppermint Lounge was launched into international fame and astonishing success. It changed the paradigm. It became a harbinger of a new era of dance and nightclubs.

What turned this dive into a showcase? Well, first of all, The Twist. “Round and ‘round and ‘up and down” the dance demanded only the simplest of moves, no fancy step work or partner maneuvers. It could be executed with fits of intense sensuality or, otherwise, with a kind of pedestrian simplicity that was no more outré than walking. It appealed to the young and old and could be learned in minutes.

Even though the dance had bubbled up spontaneously from the miasma of gay, Black and youth subcultures, The Twist was introduced to the media through the 1960 version sung by the fresh-faced grinning Chubby Checker, a young protégé of teenage entertainment factotum Dick Clark, whose music and dance program American Bandstand was the reigning teen-tastemaker. However, they knew something bigger was afoot when the adults didn’t want to get off the dance floor when The Twist was played.

The Twist went from a mere hit to a worldwide craze when the Peppermint Lounge’s house band, a group of New Jersey kids calling themselves Joey Dee and the Starliters, introduced yet another song linked to the dance, the “Peppermint Twist” and managed to turn their unlikely home into the Sanctum Sanctorum of the global mania. The crowds outside the 45th Street nightclub could not be repressed. Period postcards tell the story of the Peppermint Lounge’s ascent from grime to greatness.

The club offered a floor show by the Peppermint Loungers that showcased some of the latest moves associated with the craze. The cards below show how as time passed, the girls’ costumes grew skimpier as the boys’ outfits got more relaxed 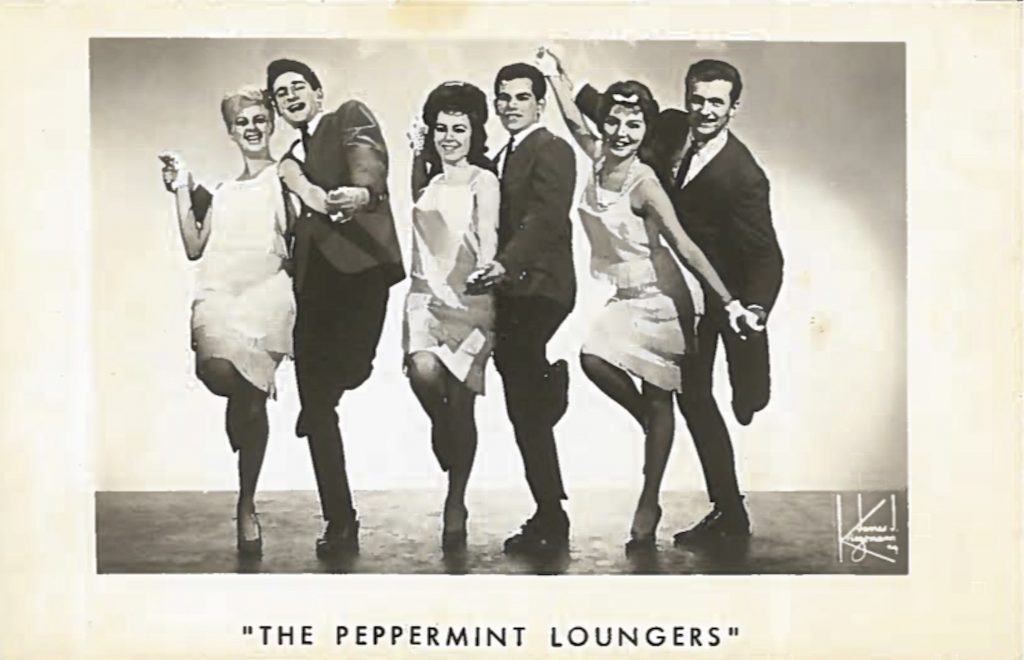 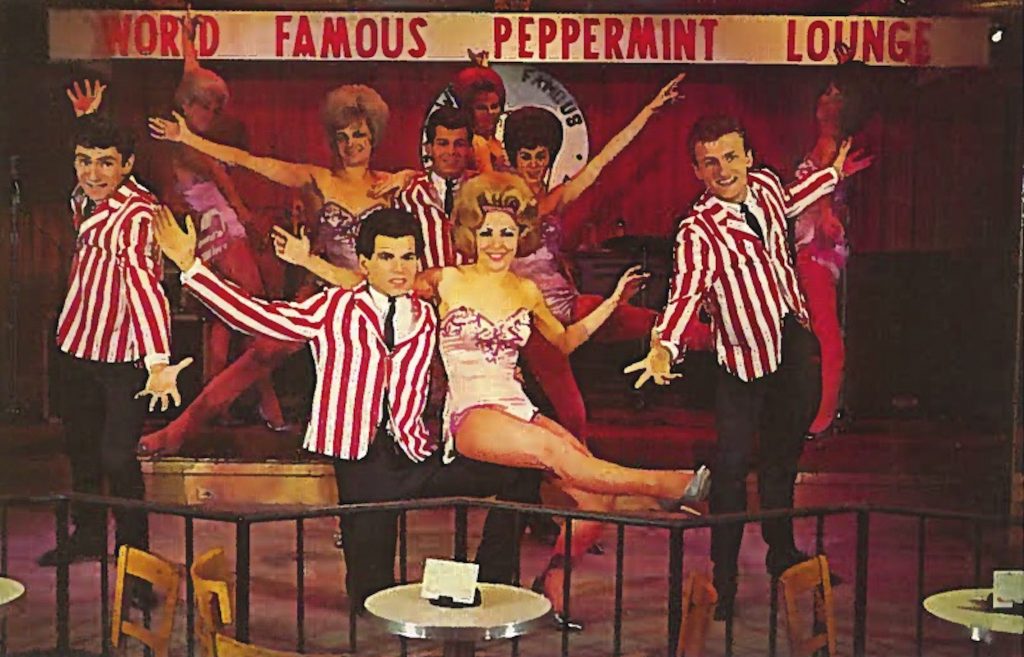 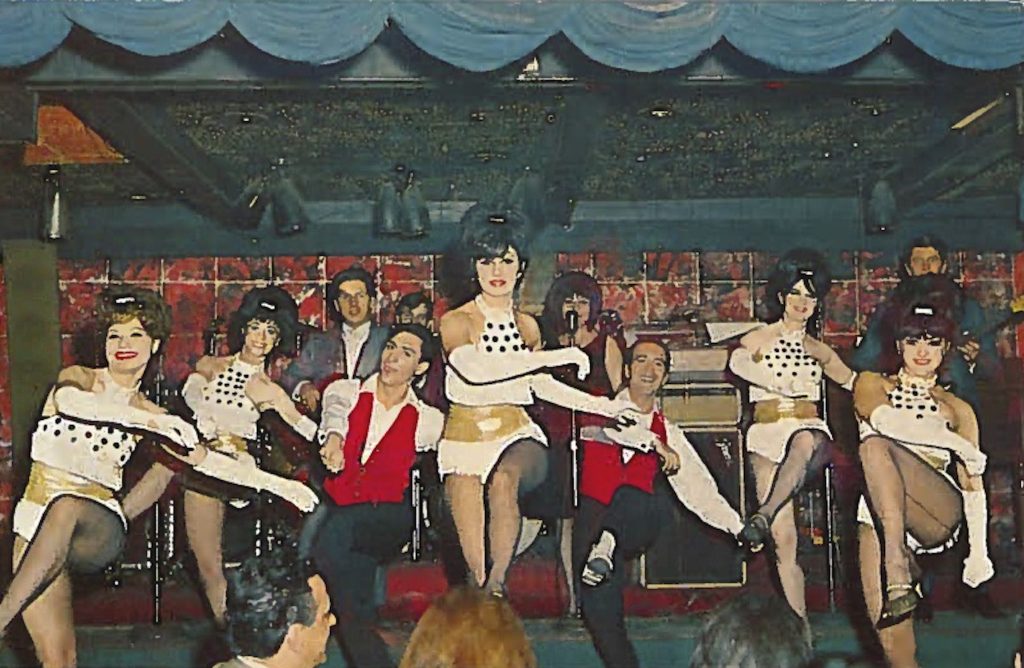 You couldn’t tell from the club’s basic marquee or its workaday interior that anything special was going on there. A certain kind of shabbiness was part of the brand, and for that time and place, was possibly connected to its gay heritage or efforts to appear “authentic.” On the other hand, intermingled among the crowds were many A-list Hollywood and Broadway denizens as well as political and literary lions. 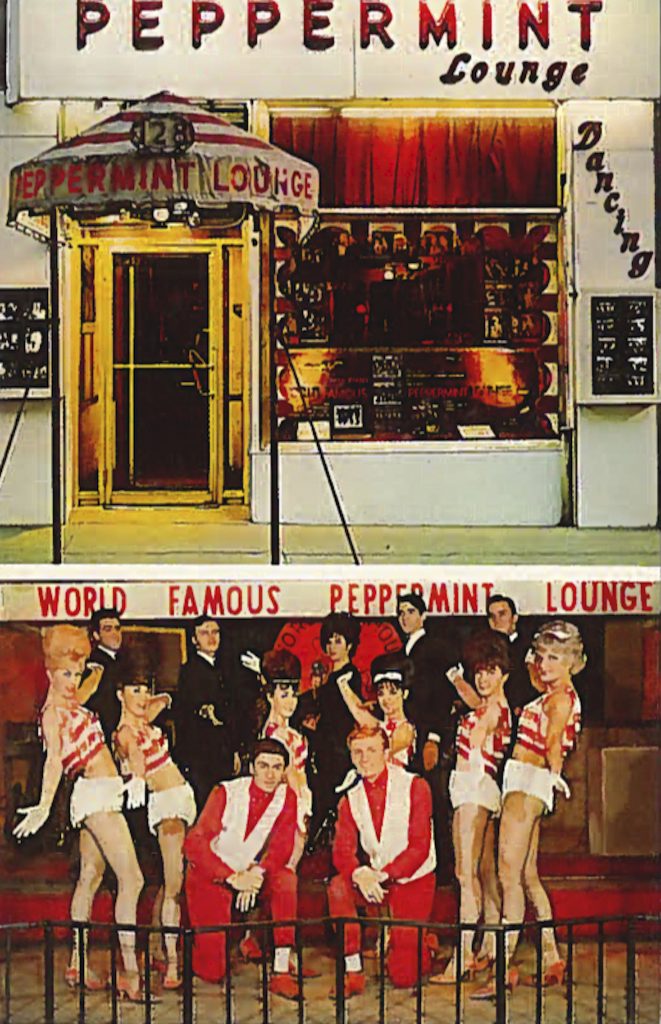 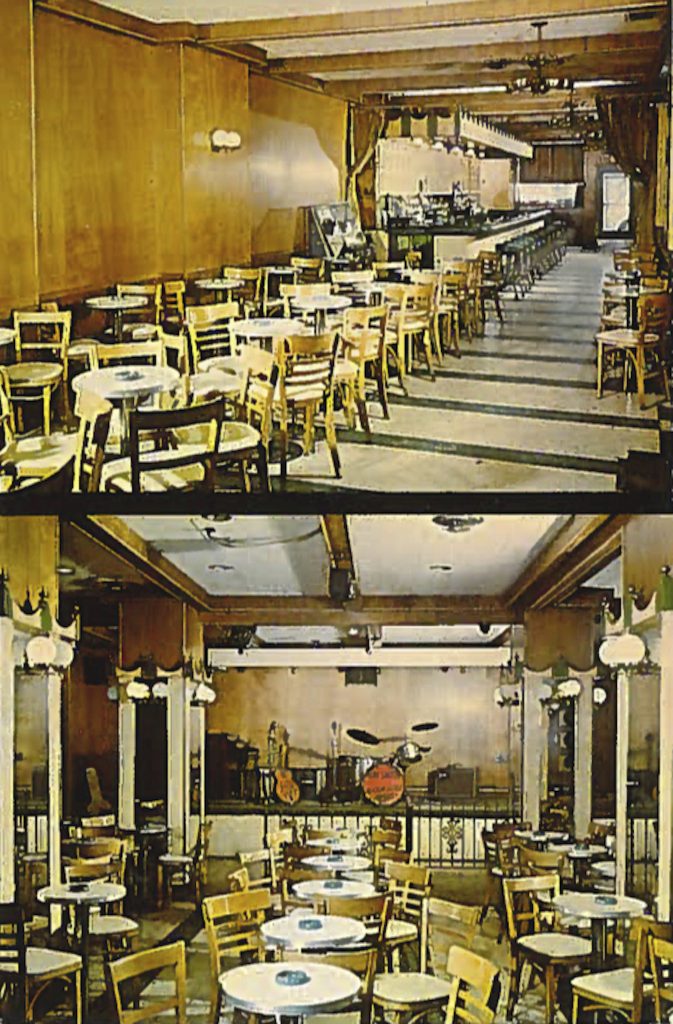 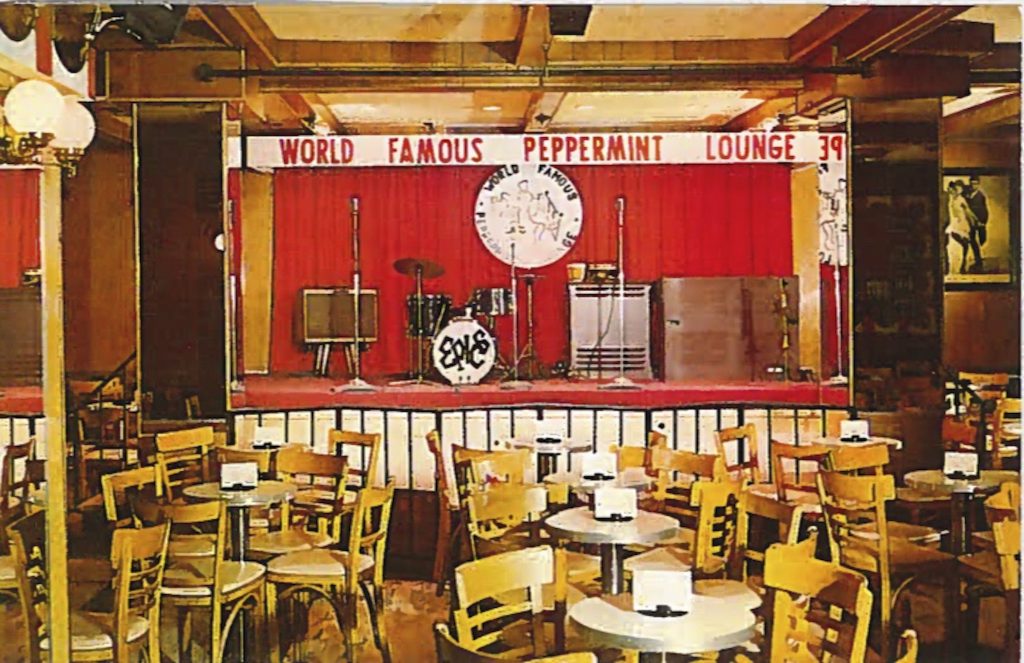 Celebrities of every stripe passed through the club – John Wayne and Judy Garland, Jackie Kennedy and John Lennon – all coming down to see Joey Dee and his interracial nest of Starliters stir the crowds. An oversized postcard published for the club by jpm boasts of the big names crowding into its VIP section. There’s Frank Sinatra about one-third in from the right and that looks like a young Truman Capote standing over him. Along the right edge, that could be Lee Radziwill, sister of First Lady Jackie Kennedy and next to her blind Latin crooner Jose Feliciano. Do you recognize anyone else here?

The Peppermint Lounge changed New York City nightlife forever. It marked the start of the Rock n’ Roll era as the predominant musical form in nightclubs. Rock, which had been developing during the Eisenhower years as an infrequently congenial jumble of African-American Rhythm n’ Blues and up-tempo Hillbilly music – Chuck Berry meets Elvis Presley – found that it could attract a devoted radio audience, huge record sales and late-1950s concert-goers at venues like the Brooklyn Paramount.

Bringing Rock into the club scene, however, was slower than one would expect. It took Rock n’ Roll more time to take off in the nightclubs because the early 1960s was a period of competing musical styles. When the Peppermint Lounge was attracting massive audiences, other New York City clubs were still working their way through the Mambo Craze and Bebop. An even more serious competitor, the Folk Revival was spilling out of clubs along McDougal and Bleecker Streets in Greenwich Village like the Café Wha? and The Bitter End. Offering an acoustic sound and lyrics drawn from civil rights and anti-war protests, the Folk Revival led by Bob Dylan, Joan Baez, Peter, Paul and Mary, among others was suddenly in competition with American Rock n’ Roll delivered ironically by the “British Invasion” – U.K. megastars like the Beatles, Rolling Stones, Herman’s Hermits and The Animals.

Some downtown clubs like the country and folk-oriented Village Barn tried to cash in on a share of the excitement and audience being generated by the Twist: 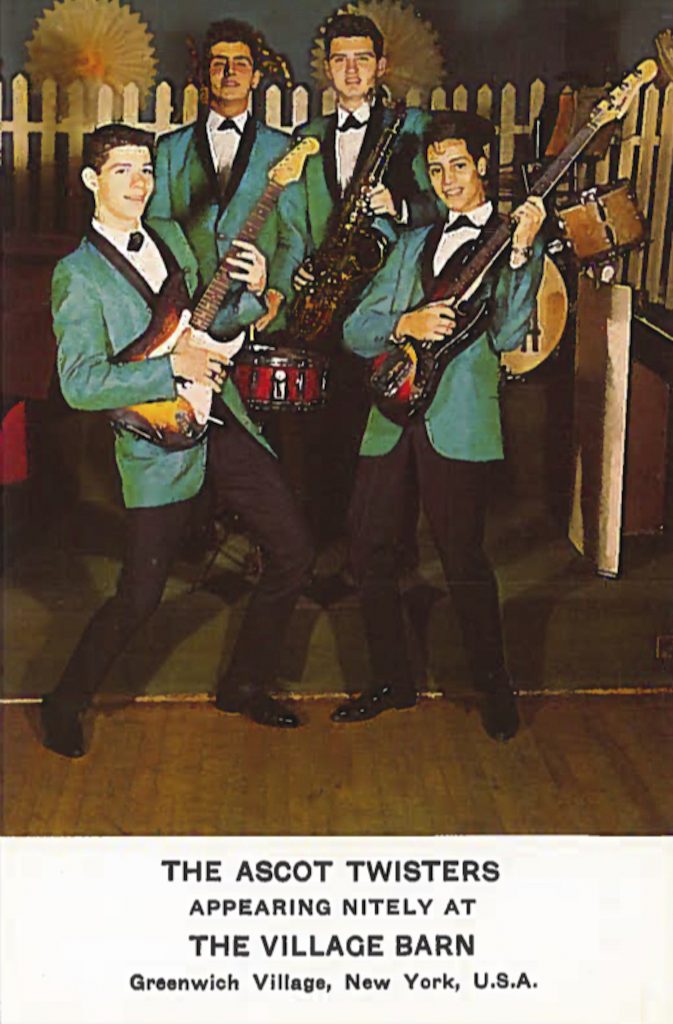 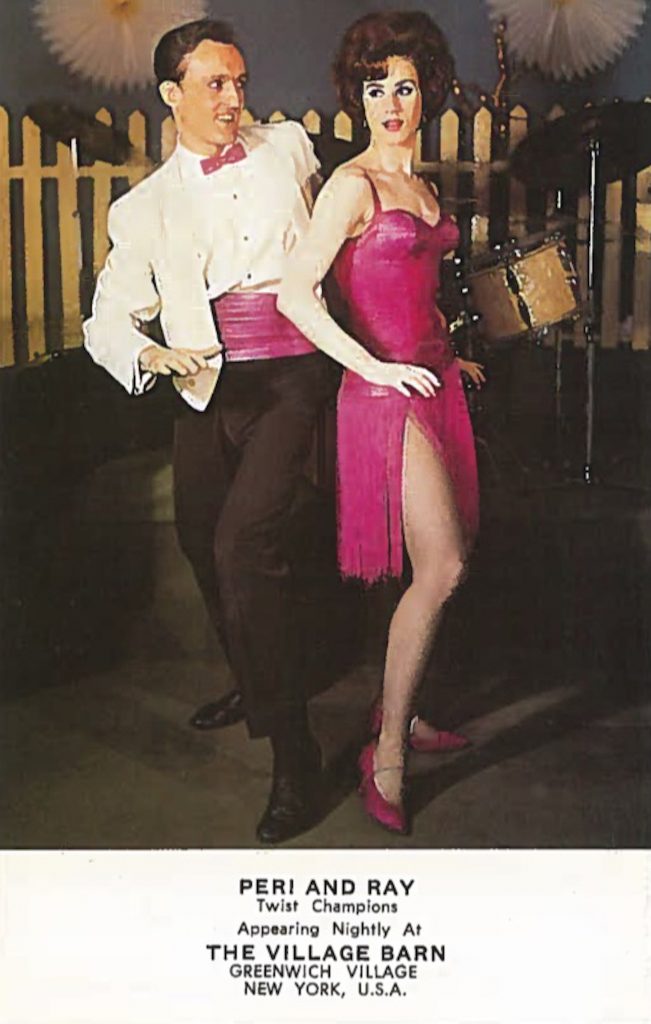 New sounds were entering American Rock n’ Roll – the Motown beat led by groups like The Supremes and The Temptations and the “psychedelic” California voices of The Jefferson Airplane and Grateful Dead. By the mid-1960s Rock clubs were establishing themselves in the East Village – on Saint Mark’s Place the Electric Circus dominated by the Art-Rock pioneers the Velvet Underground and San Franciscan Bill Graham put the Fillmore East into a recently abandoned Yiddish theater on Second Avenue. The Woodstock Music Festival of 1969 showcased a cacophony of styles, yet it could not translate itself into nightclubs. It took several more years into the mid-1970s for dance-oriented Studio 54 up in the Times Square area to recreate the fervor, long lines and celebrity cocooning that had characterized the Peppermint Lounge.

The Twist craze permanently changed the nature of partnered dancing. Couples doing the Twist could connect by touching but not much more, each executing their moves independently. This made it possible for single men or women or even groups of three or more to join everyone else on the dance floor. In the aftermath of the Twist other dances came along to add variety – the frug, swim, mashed potato, funky Broadway but none of these reached the status of a fad. During the disco era at Studio 54, some partnered dancing was revived but was not long-lasting.

The Twist craze also proved to be Springtime for the transition to the Baby Boom generation. Born to returning GIs and their peers following the end of World War II, all of the Baby Boomers were not yet born during the Twist craze. The generation would eventually grow to more than 75 million. The Twist marked them as the new cultural arbiters despite being still in their teens. Following that point the Boomers’ meandering tastes in music and culture, fashion and style, protest and politics were closely followed by the rest of society. 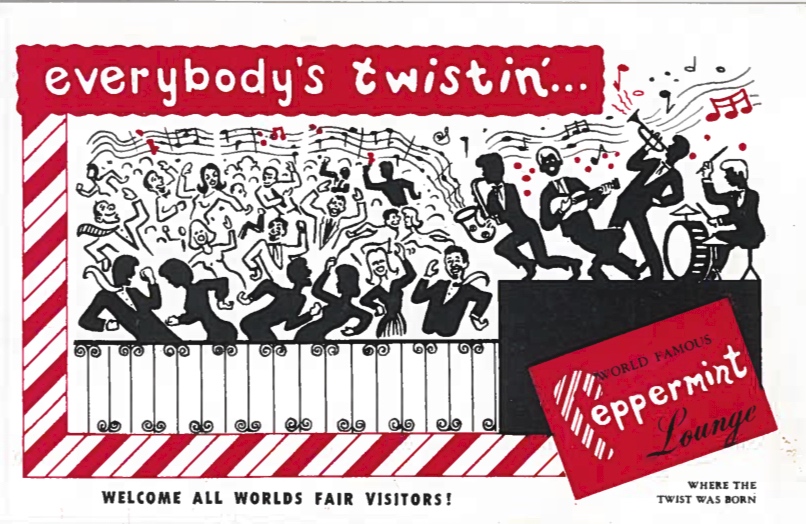 Well, have you read all this and are wondering what it’s all about? See for yourself. Click here.

Hy Mariampolski holds a Ph.D. from Purdue and spent his career in international marketing and market research. Nowadays, living in East Hampton, New York, he collects, trades, sells and writes about postcards. Hy has also been teaching a Zoom course on New York history through postcards called “Wish You Were Here” for CL&L, an adult education affiliate of Marymount Manhattan College.
PrevPreviousWould You Like to Ride in My Beautiful Balloon?
NextCharles CharlesworthNext
7 Comments
Oldest
Newest Most Voted
Inline Feedbacks
View all comments
Gerry Biron

Thanks for the great article. I was just a teenager at summer camp in New Hampshire when I first heard the twist and everyone at camp was doing it. Great fun.

My grandmother had an exercise device known as a Trim Twist, with a name and graphics inspired by the dance popularized by Ernest Evans, who changed his name to Chubby Checker as a play on Fats Domino.

Very interesting and entertaining article. I believe the person standing behind Frankl Sinatra is Johnnie Ray not Truman Capote. I happen to have 4 record albums recorded by Joey Dee and the Starliters 2 live albums & 2 studio recorded albums. I’ve been offered as much as $25. for each album but have decided to hold on to them.

Another great article! I never was at the Lounge, but certainly twisted in high school. Thanks for the look back.

Wonderful as always! memories of great silly fun. thanks, Hy.