Would You Like to Ride
in My Beautiful Balloon?

Published by Raphael Tuck & Sons under their Oilette brand name, this card was issued in August 1908 as part of a six-card set titled Luftschiffe; “Airships.” In as much as all the wording on the face and reverse of the card is in German, it is unsure if the set was ever intended for the British market. 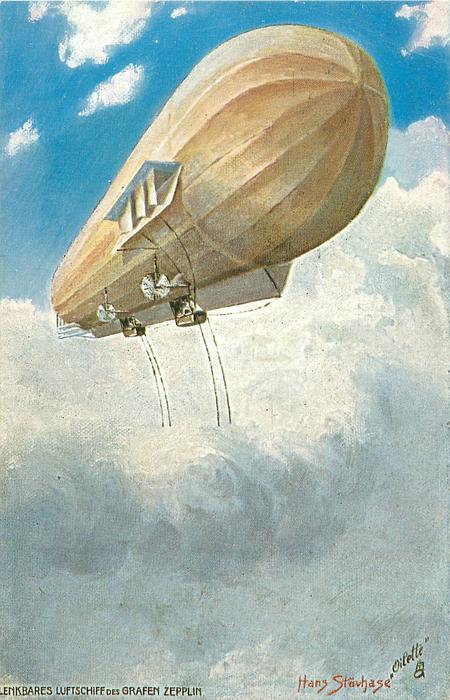 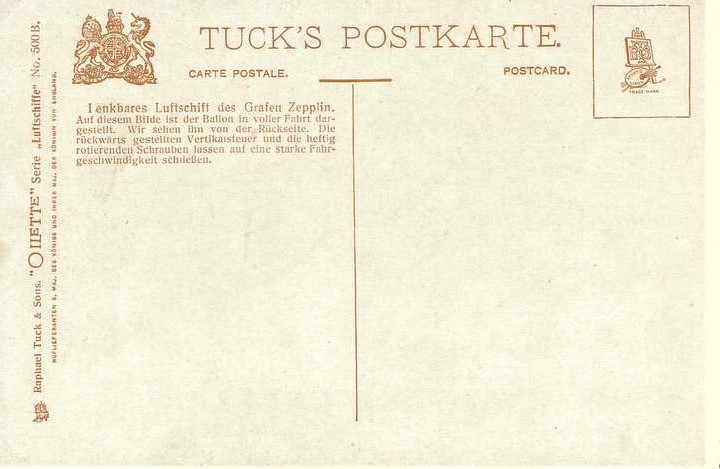 The images in the set are from paintings by Hans Stövhase. Additional information about the artist is still unknown.

A Zeppelin is a type of rigid airship named for the German inventor Count Ferdinand von Zeppelin. The Count pioneered rigid airship development at the beginning of the 20th century. Zeppelin’s notions were first formulated in 1874 and developed in detail in 1893. They were patented in Germany in 1895 and in the United States in 1899.

After the outstanding success of the Zeppelin design, the word zeppelin came to be commonly used to refer to all rigid airships. The first Zeppelins flown commercially were in 1910 by Deutsche Luftschiffahrts-AG (DELAG), the world’s first airline in revenue service. By mid-1914, DELAG had carried over 10,000 fare-paying passengers on over 1,500 flights. During World War I, the German military made extensive use of Zeppelins as bombers and as scouts, resulting in over 500 deaths in bombing raids in Britain.

Curiosity led to an examination of how the Zeppelin was viewed in August 1908, since that was the time when the card was published. In the British Newspaper Archives I found two contemporary articles. First, from the South Wales Daily Post of August 5, 1908.

Count Zeppelin with his marvelous air ship Zeppelin No. 4 made a bold attempt Tuesday to complete a twenty-four-hour run under the conditions laid down by the German Government for a purchase of his vessel by the State. He achieved a new record and drew nearer to the conquering of the air, but he did not fulfil the conditions. Starting at Friedrichshafen on Lake Constance at 6:20 AM, he headed westwards to Basle and then turned north along the course of the Rhine, circling round the lofty spire of Strassburg Cathedral. He followed the Rhine as far as Mayene, and then once more turned, when some defect in his airship compelled him to interrupt the attempt. He descended on the Rhine near Oppenheim at 6 PM, having remained in the air [eleven hours and 40 minutes], and covered between 280 to 330 miles. This is much in excess of his previous performance, and is the longest flight as yet achieved by any dirigible.

Apart from Count Zeppelin’s performances the longest flight achieved by an airship was one of 180 miles by the ill-fated French vessel Patria in November last year.

Only three days later the Exmouth Journal of August 8, 1908, reported.

Count Zeppelin’s new airship has been destroyed. The biggest airship ever made broke from her moorings at Stuttgart in a gust of wind, travelled 100 yards, and struck her stern on the ground. Immediately a column of smoke rose, followed by flames. Then a terrific explosion occurred. The balloon split in two. One-half was whirled away by the wind, and the other burst into flames. In less than a moment all that was left of Count Zeppelin’s airship was the aluminum framework, almost completely wrecked by the force of the explosion. Count Zeppelin heard the explosion as he was finishing lunch in the inn. There was a panic among the enormous crowd, and wild stampedes in all directions. Four soldiers standing to leeward of the vessel were seriously injured. Fifteen other persons received slight injuries. Thus, comes to an untimely end the airship that, reared on end, was a third higher than St. Paul’s Cathedral, and had a canvas casing a third greater in diameter than the Rotherhithe Tunnel the Prince of Wales opened the other day. Count Zeppelin had just had a long and record flight in his newest airship. All previous records had been broken, even if the great flight did not satisfy all the conditions essential to a purchase by the German War Office. These conditions were as follows: 1 – The airship must maneuver for twenty-four hours in the air. 2 – she must be able to land without injury to herself on either water or earth. 3 – She must be able to ascend to such a height as to be beyond the range of rifle-bullets. The explosion occurred early in the afternoon, while 60-thousand people witnessed a repair of the ship.

So, having looked at the pleasing image and having read the newspaper reports, are you better placed to answer the title question?

It was first asked by the Fifth Dimension back in 1967. Would you like to ride in my beautiful balloon?

Me? I am staying firmly on the ground.

The other five cards in the series are: 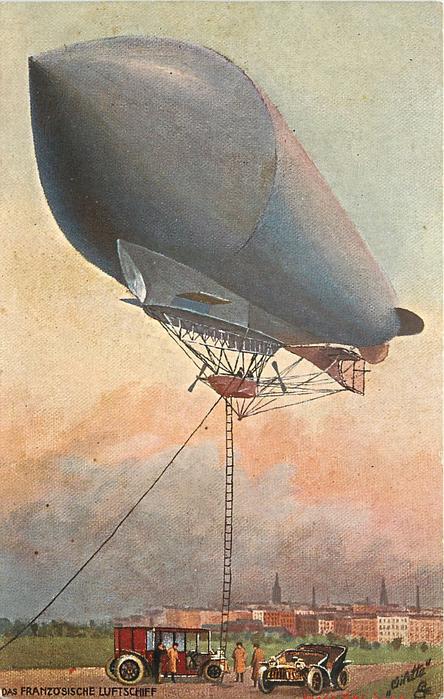 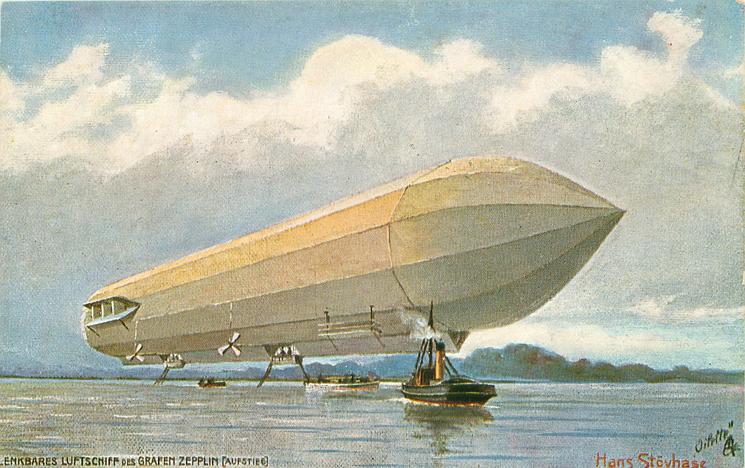 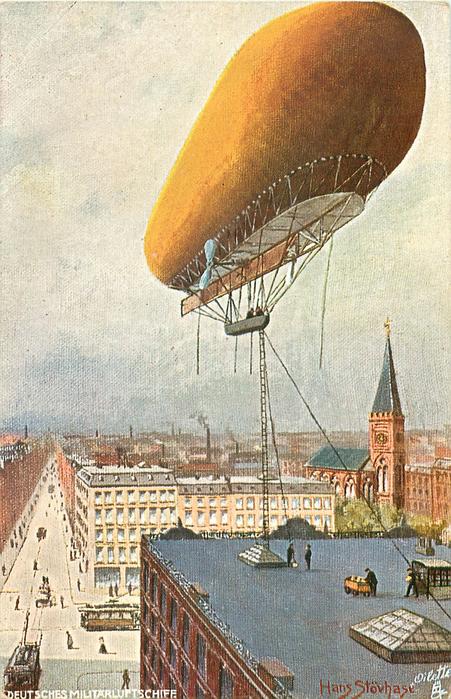 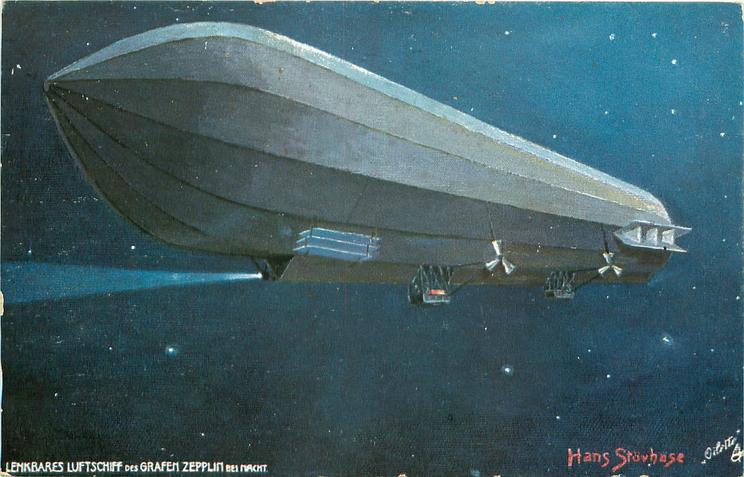 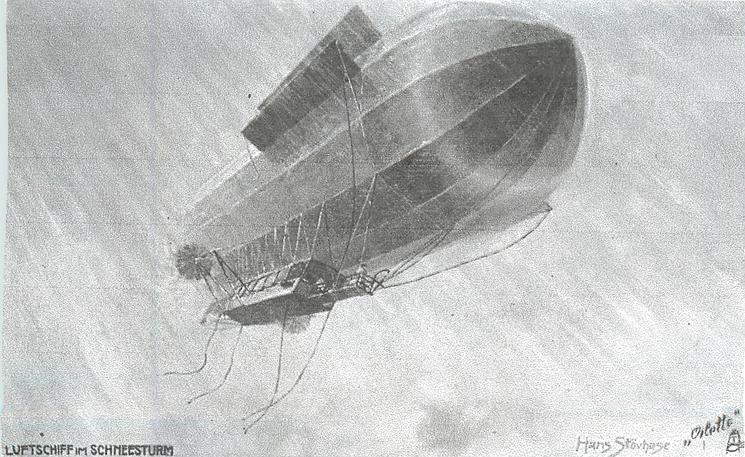 Bob Teevan is an eclectic collector of vintage postcards. He enjoys digging into the people and places related to his cards and thinks of a postcard as a window into history. He has recently begun a Facebook group, “People and Places behind Vintage Picture Postcards” that has informal and fun discussions in respect of the people and places behind postcards. He is also keen to keep the fun in the collecting hobby. He lives in Scotland.
PrevPreviousColumbia University
NextPeppermint Lounge: Twistin’ the Night AwayNext
4 Comments
Oldest
Newest Most Voted
Inline Feedbacks
View all comments
Bob Kozak

I saw a previous version of this article posted by Bob in the Facebook group mentioned in the author credit paragraph just above this comment section. I can thus vouch for the fact fun can be had in the exchanges among members.

Thank you. That’s kind of you to say

Very enjoyable article, Bob! You have some beautiful postcards featuring Zeppelins.
Would I like a ride? HECK YES.

Thank you for your comments re my article. Unfortunately, the only card I have from the set is the main card featured with the other cards from the set added by the Editor. I can however dream of finding them (cheaply).