One wonderful aspect of postcard collecting are the friendships that develop because of your collecting choices. In the years since I bought my first collectible postcard at an antique shop in Berkeley Springs, West Virginia, I have met many collectors with whom I have discussed signed postcard artists and their work.

One individual who is a standout in my mind, was a beautiful English grande dame who was a lifelong member of a British postcard club of which I was one of only two American members. That was over twenty years ago. She had two collecting passions: British canal/waterway cards and the cards of the early 20th century watercolorist Henry B. Wimbush.

Spending two delightful hours in her parlor one afternoon looking at albums of Wimbush postcards was a special lesson in postcard history. There were hundreds of Wimbush cards. I remember making the remark that he must have done a painting every day of his life.

Wimbush was born in London on March 11, 1858. (Art historians dispute his birth year, some suggest he was born in 1861.) Queen Victoria had already reigned for over twenty years and England was in the process of Empire building and wild economic expansion.

The Wimbush family lived in central London and enjoyed a rather excessive lifestyle. The senior Wimbush was in service to the crown and held a well-salaried position.

Much of Henry’s early training was in oils but he made a successful transition to watercolors in his mid-twenties. His success as a landscape artist, book illustrator and postcard artist was well established when he was asked to do his first exhibit at the Royal Academy in 1888.

Other subsequent exhibits include ones at the Royal Institute of Painters in Water Colors, the Royal Society of British Artists in London, and in more than a dozen other British and European cities.

Wimbush painted only on-site, mostly in England, Scotland, the Channel Islands and Wales. He provided illustrations for several books published by A & C Black and was a leading artist for the postcard company Raphael Tuck and Sons. 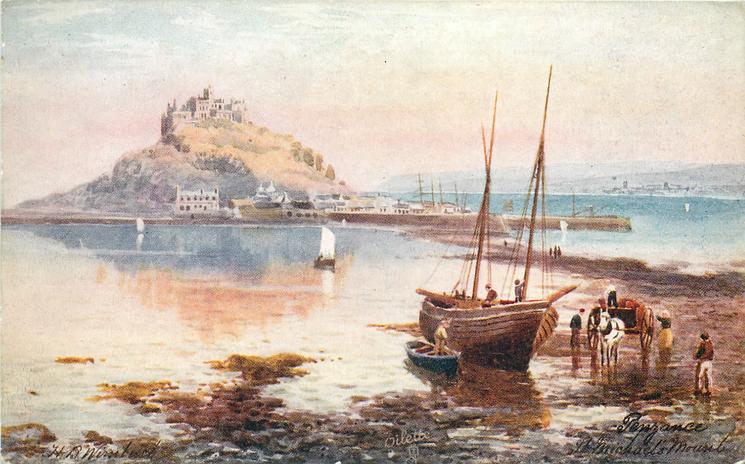 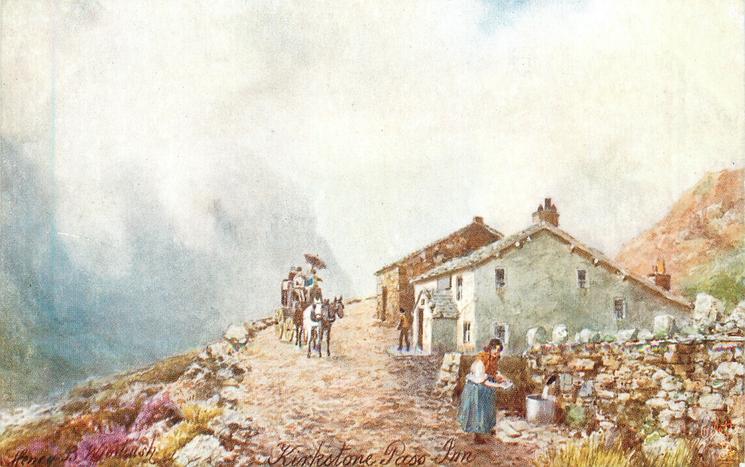 In 1880 Wimbush married Margaret Sillar; they had eleven children. After Margaret’s death in 1927, Henry married Emily Dremel. Henry and Emily lived at Taunton in Somerset until he died on May 5, 1943.

I’m sorry I never had the opportunity to thank my hostess that day all those years ago for introducing me to Henry Wimbush’s art. I have only sixteen of his cards, but am always on the lookout for more.

One of my favorites is this one of the harbor in Plymouth, from where the Pilgrims left England to pursue their religious freedom. 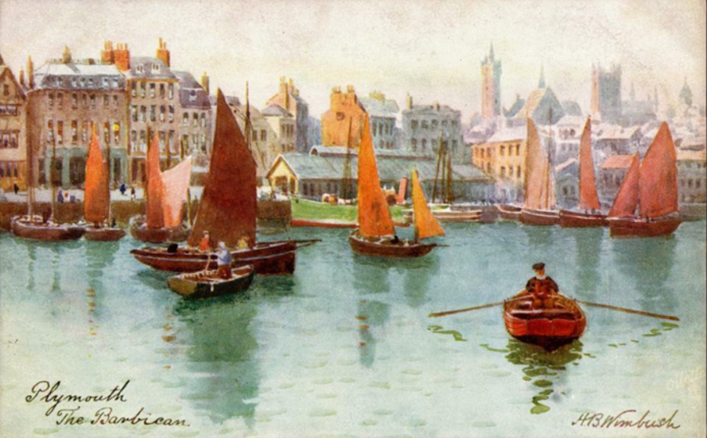 Sets of watercolor scenes by H. B. Wimbush appeared in the Tuck catalogs as early as 1908, and possibly earlier as unsigned presentations. In as much as Wimbush worked mostly in the UK, this list is prepared for those who may want some of Wimbush’s images from some of the many dealers who are now sorting all Tuck cards into one grouping under the manufacturer’s name.

And many other six-card sets with names such as: Charming Spots, Cornish Cliffs and more.

One bit of postcard history that we hesitate to use because of our inability to verify its accuracy centers on Henry Wimbush. It started early in the first decade of the 20th century. Wimbush was working for a lengthy period of time along the Kirkstone Pass in the Lake District in north central England. There are several areas within the district that even in the late 19th and early 20th century were favorite sites for summer holiday makers (vacationers). One such place was the Kirkstone Pass Inn. The inn was remembered in travel books and novels as a haunted hotel. Public awareness of the hotel was enhanced well into the 21st century when a Travel Channel TV program entitled Haunted Hotels featured the Kirkstone Inn in the premier episode that aired in October 2001.

The Kirkstone Pass Inn was likely a favorite hangout for Wimbush while working in the Lake District. The legend continues that on one summer afternoon Wimbush found a peculiarly shaped piece of water color paper on which he painted a scene twice the dimensions of his normal working format. As was his usual practice the finished image was shipped off to Tuck & Sons.

And this is where supposition turns to pure speculation. When Wimbush’s shipment of watercolors arrived at their office in London it was opened and sent to the processing desk. Let’s all imagine the surprise on the faces of those at work that day. The picture of the Kirkstone Pass Inn was unveiled and someone surely said, “What are we to do with this, it’s twice the normal size.”

At which point, it may be fun to assume that someone else said, “Let’s make the postcard twice the normal size.” Thus, was born the bi-fold postcard.

We hope you understand that this is a great story, but not one word is verifiable.

Surely a bi-fold Tuck postcard is among the rarest of their products, but Postcard History went to great lengths to find an image to show our readers.

Dear Readers,
If you are aware of other Tuck bi-fold postcards, please contact Postcard History and tell us where and when you found such a treasure.

Ray Hahn is a retired educator, but he has never stopped teaching. His decades of researching, writing and editing a newsletter for the South Jersey Postcard Club has been a world-class education in trivia. In addition to postcard collecting, Ray’s other interests include history, genealogy, and touring the world with his wife Marie. Ray often advises his readers to "Join me as we explore the world one postcard at a time." Ray and Marie live in New Jersey.
PrevPreviousThe Dancers of Bacchus – at Home in Pompeii
NextThe Tree StumpNext
2 Comments
Oldest
Newest Most Voted
Inline Feedbacks
View all comments
Bob Kozak

I have some more recent cards in the bi-fold format, but never realized until now that the concept predated the chrome era.

My Mother in-law, Betty Hurst was a member of the South Jersey postcard club for many years, until she passed in the late 80’s. Now 35 years later I’m enjoying her vast collection.