The Dancers of Bacchus

at Home in Pompeii

Be it recognized or not, public architecture is much more than mortar and stone, glass and steel, or wood and plaster. There is the art. But so few realize that without the art the majority of our public spaces would be nothing more than neatly stacked piles of rock.

At home and around the world I find that we need to make our opinions known. Here is my sermon on the topic.

With some notable exceptions, those reading Postcard History are of the Silent Generation, born between 1928 and 1945, when children were seen, not heard. Also we are called traditionalists, or sometimes, War Babies. The subsequent generation is the Baby-Boomers (1946-1964), the largest age-group of individuals in world history. Collectively these two generations are ages 53 to 89; averaging just a few months above age 75.

Think about the postcards we collect and the times they represent. Aren’t you continually surprised how postcards, in many ways offend and insult our modern sensibilities on topics such as politics, personal relationships, race, humor, diet, personal appearance, levels of education and others?

Now think about what people may have been like in generational time-spans that include the Huns of North Asia, the Persians of the Middle East, the nomads of North Africa as well as the many and varied cultural groups of Europe.

To understand the postcards being examined here, knowledge of the Roman Empire’s harsh and violent society is critical. Then, large percentages of the population lived in fear of those who had power because of wealth. Understand that those with wealth in Roman times are the dictionary example of pleasure seekers and hedonists. Those who offended the debauched were poor and degenerate or worse yet, sickly. Therefore, we are dealing with those who were more offended by bare feet than bare breasts.

One consequence is that the wealthy segments of society flaunt wealth by exhibiting what the lesser privileged cannot afford. Frescoes, used as home décor are perfect examples. 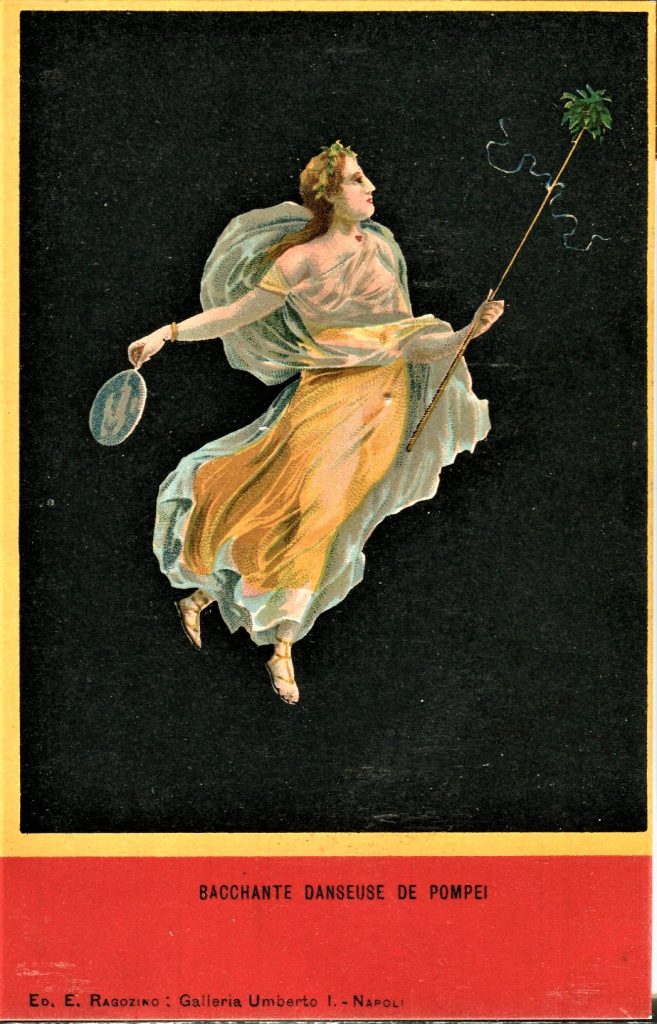 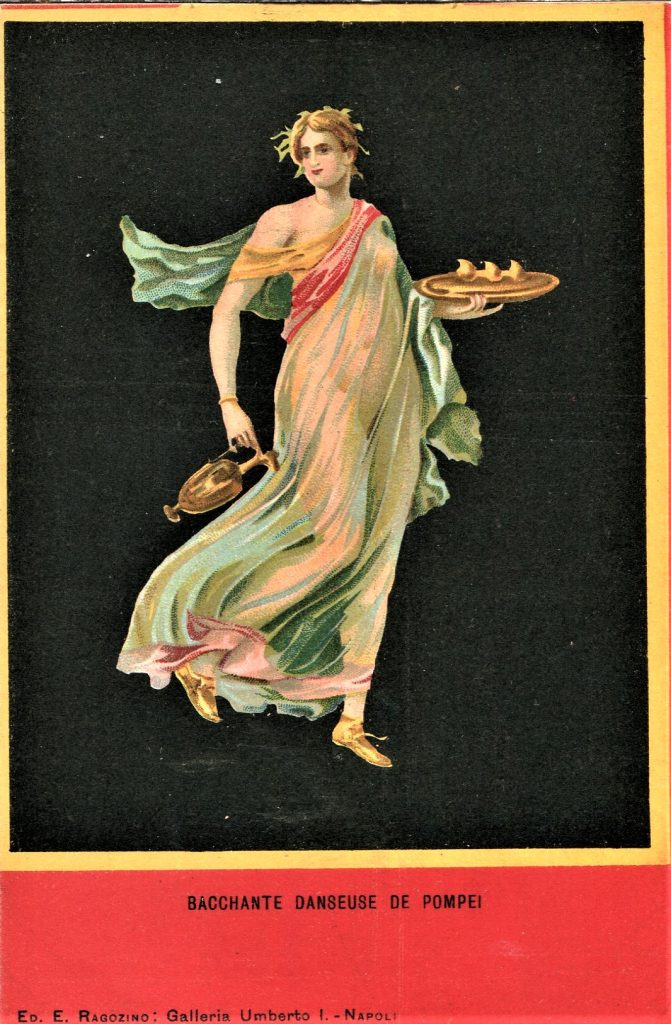 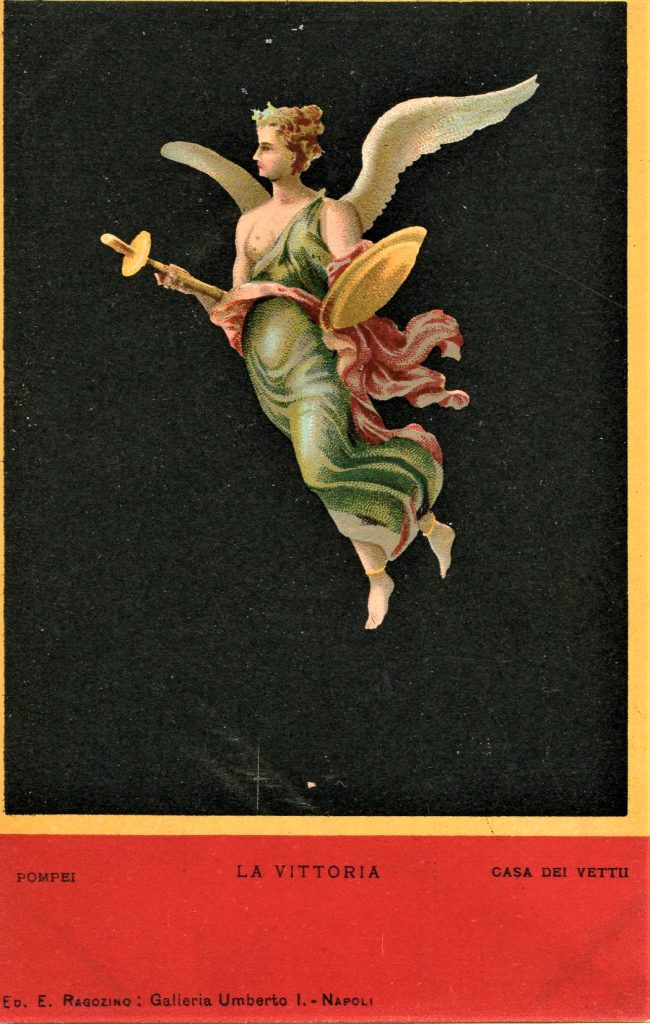 With that said, it is easy to understand that the images found here on cards published by the Galliriae Unberto I, circa 1908-1912, are showing us no more than the images (literally, paintings on the walls) that Romans and Neapolitans owned for personal gratification. Murals used by the wealthy of the first century anno domini – the first truly western civilians. 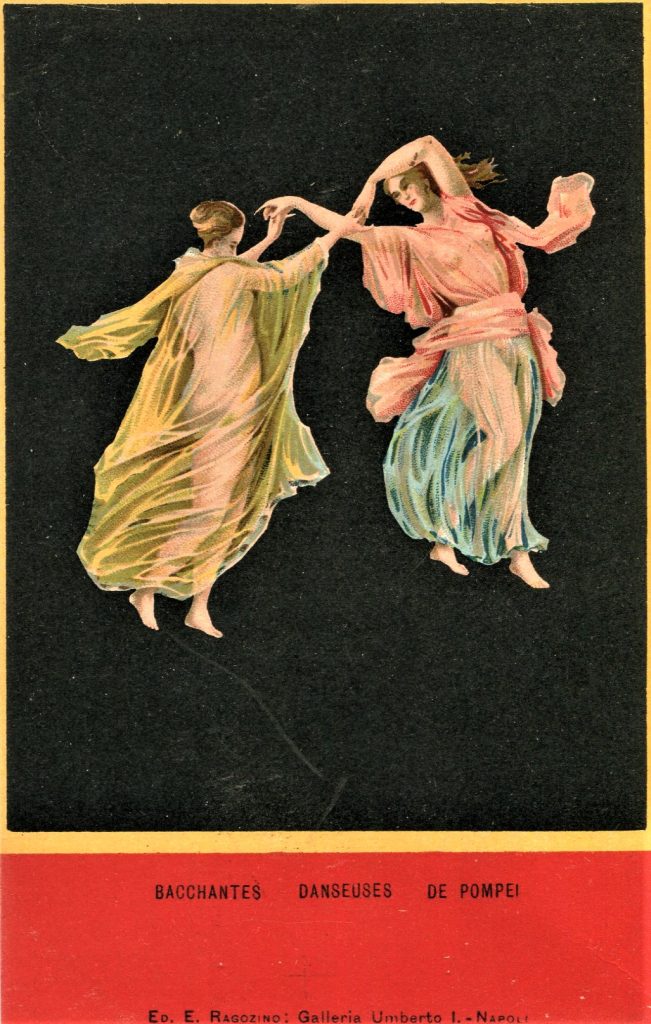 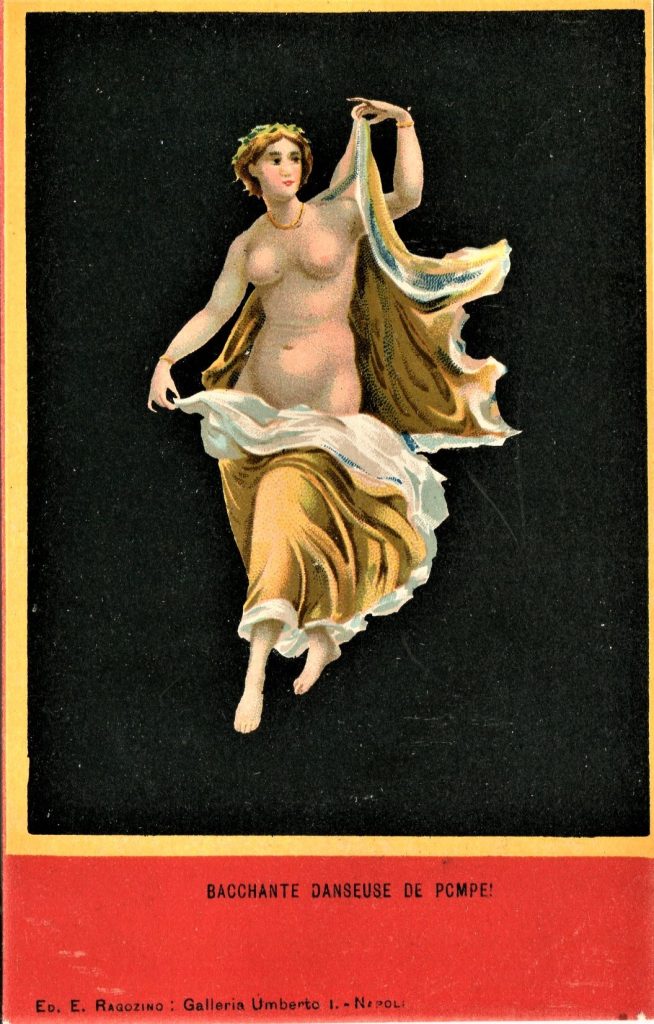 Galleria Umberto I is a public shopping gallery in Naples, Italy, built between 1887–1891. It was once the cornerstone in the decades-long rebuilding of Naples. For nearly thirteen centuries after the eruption of Mount Vesuvius, the environs of the Neapolitan landscape lay in ruins. When King Umberto took the throne in 1878, he attempted a modernization of Italy, a time he called risanamento, (literally translated it is “making healthy”). Emanuele Rocco, who meant to combine businesses, shops, cafés and social life in a public space and apartments as private space on the third floor, designed the Galleria as a personal favor for Umberto. 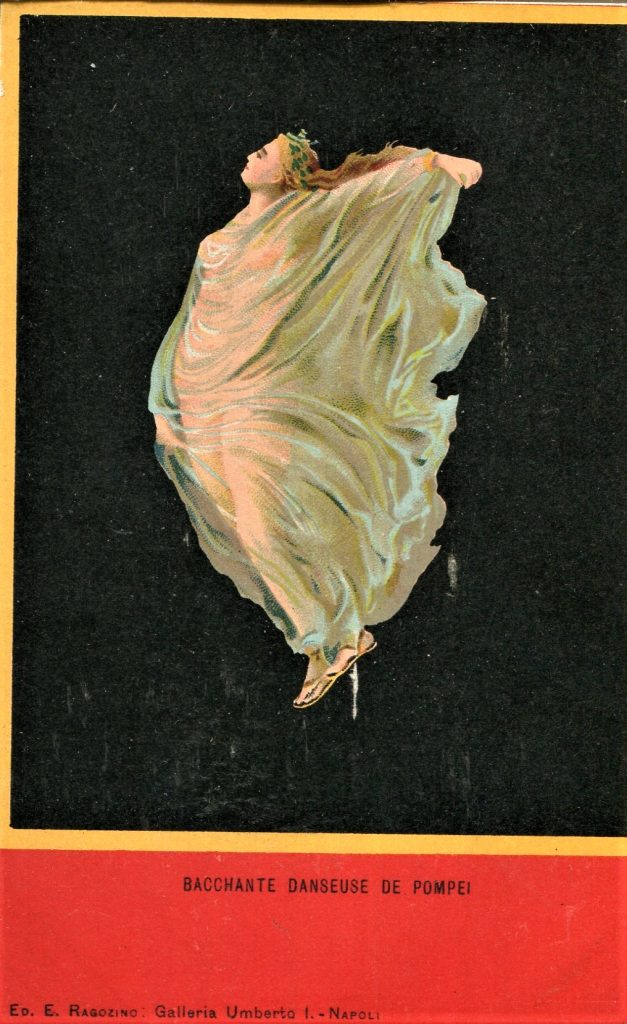 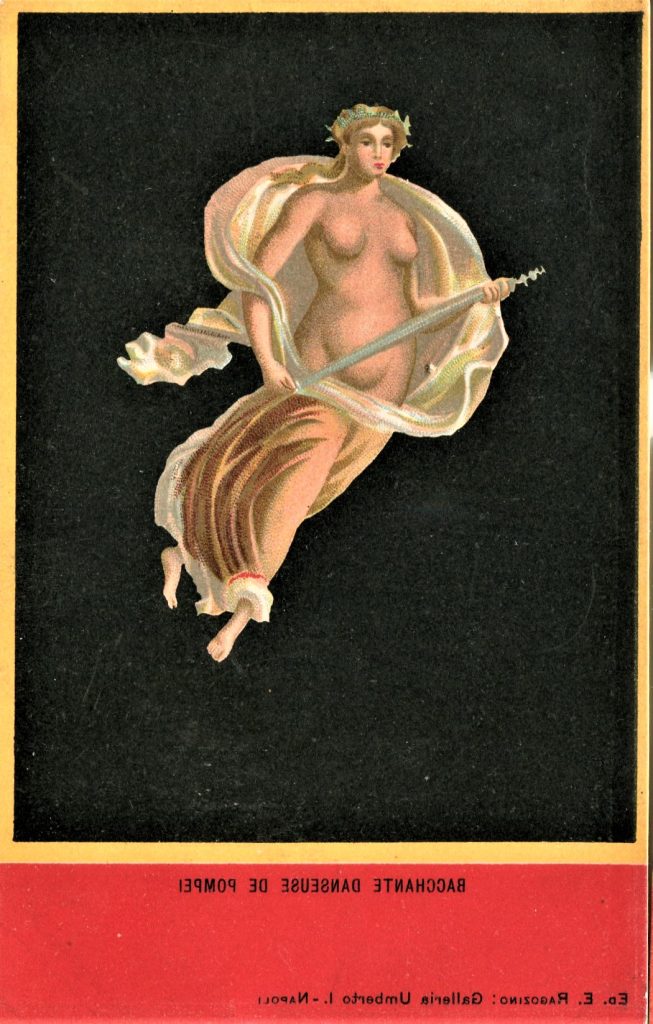 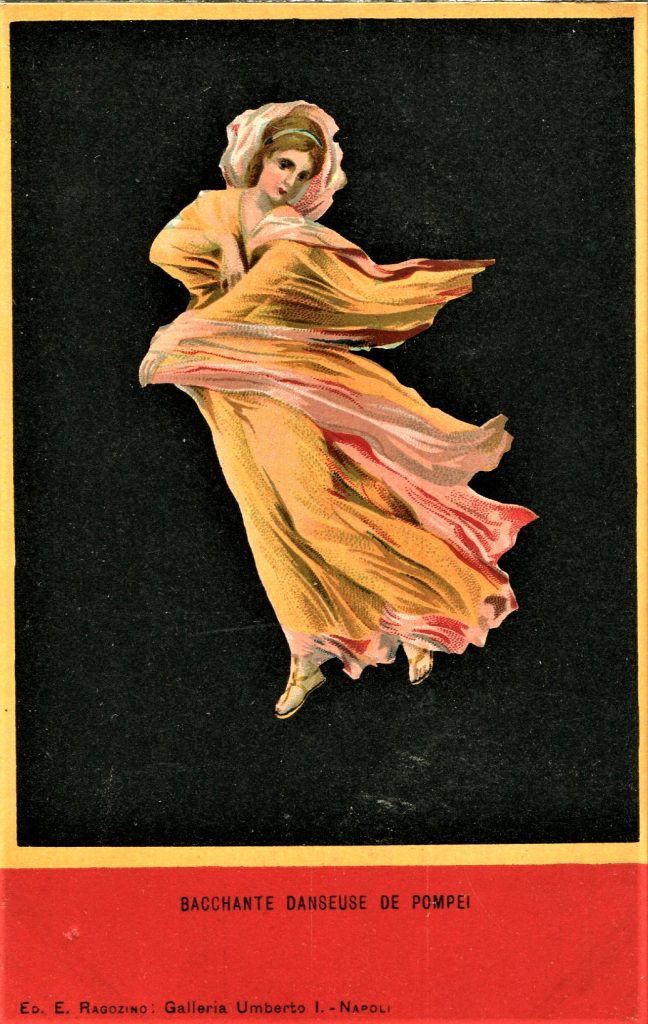 The cards show the ancient images Rocco used to decorate the apartments at the Galleria. The original frescos, found during the excavation of Pompeii that began in 1599, are known simply as the Bacchante Danseuse de Pompei or the Dancers of Bacchus – the god of wines and joyous living.

There is much more scholarship concerning the original images than the postcards. As best we know, there are two sets: one of images found in the Casa Vettii, an estate owned by the most affluent family of Pompeii and another, partially from the Casa Amorini, other private residences, and spaces like the public baths.

There is no published account (checklist) of the number of cards in each set. As for their appreciation as artistic treasures, the art is exquisite. The artist of the Bacchus set had ample skill in the portrayal of the human form as well as bright and optimistic imaginings of movement and measure.

Certainly, these cards appeal to a small audience, those who value art and appreciate history on a very personal level. For any collector who appreciates the character of artistic cards, these are high quality additions to your collection. It doesn’t matter that they are not signed, after all the artist died nearly two thousand years ago.

Dr. Dancer is joining Postcard History as a pictorial tour guide. Nate has been collecting postcards for four decades and has amassed a vast collection and stores of knowledge on his favorite topic - public architecture. He recently became a pensioner. He and his wife live in north Scotland with their precious cat named Sage.
PrevPreviousBob Petley
NextHenry B. WimbushNext
2 Comments
Oldest
Newest Most Voted
Inline Feedbacks
View all comments
Stefan Sommerfield

Great images combined with centuries spanning history. Have been to Pompeii and Herculaneum. Fascinating to see images that once entertained the wealthy. Naples still my least favorite Italian city to visit.