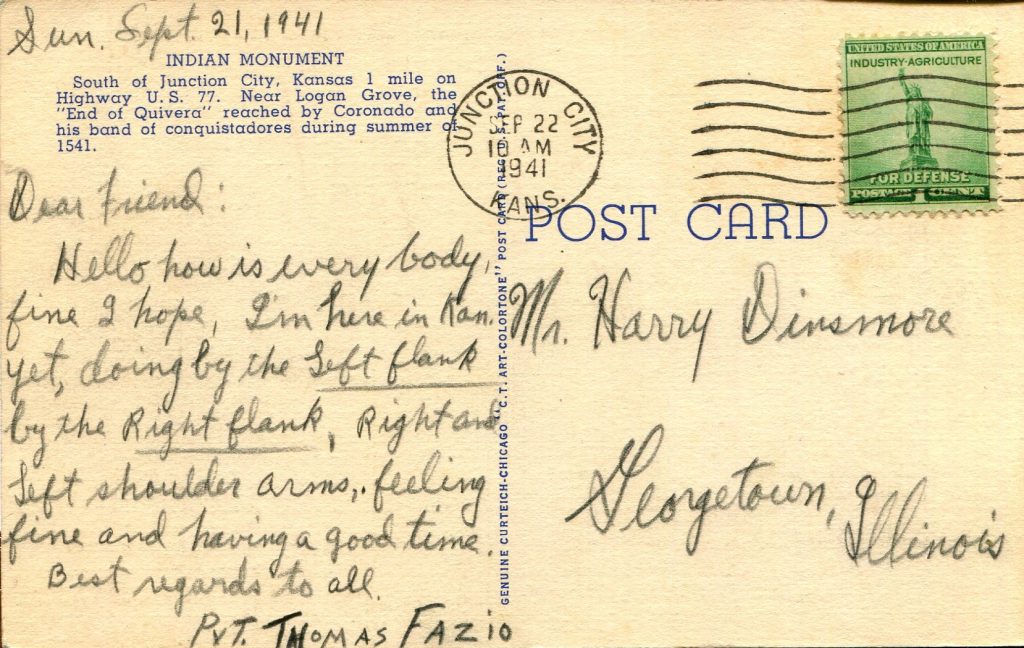 Sun. Sept 21, 1941
Dear Friend:
Hello, how is every body
fine I hope, I’m here in Kan.
yet, doing by the Left flank
by the Right flank, Right and
Left shoulder arms, feeling
fine and having a good time.
Best regards to all.
Pvt. Thomas Fazio

We all know the experience of collecting cards and finding the last missing card in a set, or finding a card addressed to someone famous, or someone we knew or know about. This card has three stories, but first . . . the card itself.

The card was brand new in 1941. Most collectors know about the production code used on about 95% of all Curt Teich postcards; from the code on this card (1B-H514) we know it was produced in 1941. It is a linen card (H) and with a production number of 514 it was likely produced sometime between June and late August.

May we assume that it was purchased in the Junction City Woolworth’s store? And, that Private Fazio bought several to mail to his friends?

There is no evidence that young Private Fazio visited the subject of the card – a statue named The Indian. The statue, first erected in 1920, is an all-cement sculpture except for the reinforced steel frame on which the cement was poured. From the image we can see the statue is adjacent to a Kansas cornfield. The best explanation of its history can be found in an Internet blog entitled Linda’s Backroad Musings that was placed on Sunday, December 4, 2005.

The author tells of her childhood experiences of visiting the statue with her family. She mentions the configuration of the surrounding area and a young Irish immigrant named Robert Henderson. Henderson, an officer in the US Army was transferred from his base in Texas to Fort Riley in 1853. After discharge from the army, he successfully farmed the land and acquired additional adjoining land, including the hill where the statue is located.

When the Civil war broke out, he enlisted and was quickly promoted to captain. His unit participated in the disastrous Red River campaign where he was wounded, captured, and made a prisoner, but eventually escaped. He was later discharged and returned to Kansas.

Because of his interest in Indian history Captain Henderson commissioned the statue to honor those who once lived on his property.

In the blog the author also tells of the dismal future the statue suffered. The photographs below testify to the condition of the statue after it had weathered nearly a hundred years of Kansas weather. It is easy to see that concrete does not weather well, nor can it stand the misbehavior of vandals and others who willingly choose to destroy our history. (Additional photos may be found online.) 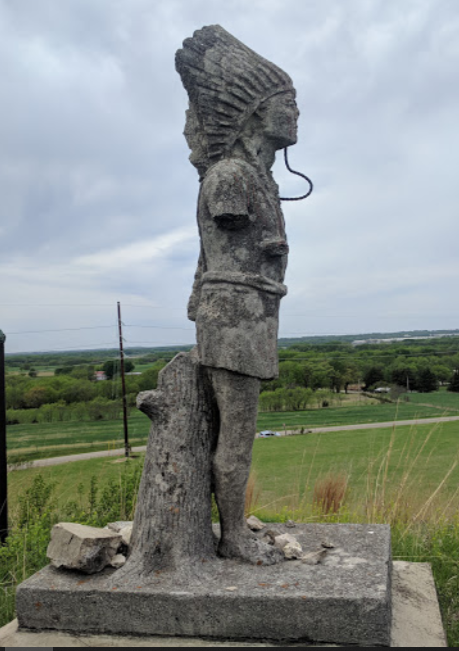 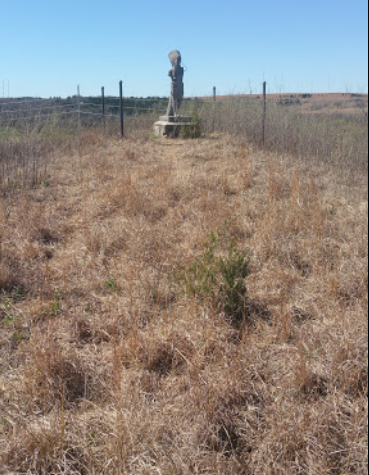 From his obituary in the Thursday, June 30, 1994, issue of the Chicago Tribune we learn that Thomas Fazio was a veteran, but there is no mention of where and how long he served his country.

There is so much more that, if time permitted, we could learn about Private Thomas Fazio, but I fear there will never be an opportunity to learn how his friend, Harry, came to be my in-law’s neighbor in Sebastian, Florida, in the late 1970s.

Ray Hahn is a retired educator, but he has never stopped teaching. His decades of researching, writing and editing a newsletter for the South Jersey Postcard Club has been a world-class education in trivia. In addition to postcard collecting, Ray’s other interests include history, genealogy, and touring the world with his wife Marie. Ray often advises his readers to "Join me as we explore the world one postcard at a time." Ray and Marie live in New Jersey.
PrevPreviousAmerica’s Fraternal Brotherhood
NextThe first major disaster recorded on postcards – The Hoboken Pier Fire – June 30, 1900Next
6 Comments
Oldest
Newest Most Voted
Inline Feedbacks
View all comments
Hal Ottaway

Oooooh my. In response to that last teaser where the author fears there will not beran opportunity to learn how his friend….and I am reminded of the song in GREASE where they sing “Tell Me More”
https://www.youtube.com/watch?v=qKiF86gDgdE&ab_channel=FernandaTeixeira

The teaser at the end of this article was a reference to how when you search boxes of unsorted postcards a collector finds something that is relevant to his/her own life. Coincidence or providence? I don’t know why it happens, but when I recognized the name on this postcard, memories flooded back of a gentleman I met in Florida just a few years after my in-laws moved to a retirement community called Barefoot Bay in the east coast city of Sebastian. I know it was the same fellow, for he often joked about being from Georgetown, Illinois, a place that… Read more »

I always get a little kick out of seeing cards on which only the recipient’s name and town are mentioned, with no home or P.O. box address necessary.

Once again, a fine article. It’s a quick read, interesting and goes down easy. I love these little nuggets, they lighten the load of a world gone a little wacko.

The postcard looks great. The statue looks like it has seen better days in the photo. Another great article.