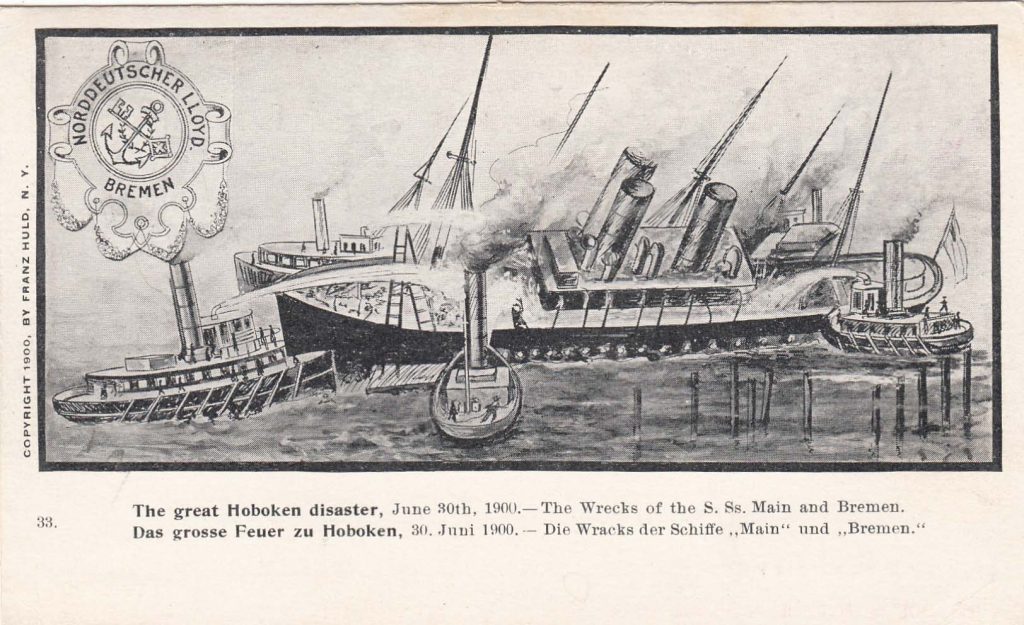 A close-up of the S. S. Main and Bremen as seen by Franz Huld, artist

At 4 PM on Thursday, June 30, 1900, fire broke out among bales of cotton stored on Pier 3 of the North German Lloyd Line Steamship Company in Hoboken, New Jersey. Fed by barrels of oil and turpentine the fire covered an area a quarter of a mile long in less than fifteen minutes. Caught in the flames were four of the North German Lloyd Line’s ocean liners, the Kaiser Wilhelm der Grosse, the Saale, the Bremen, and the Main. By the time the blaze was under control, some 160 seamen, longshoremen, and visitors were dead; the three piers of the burned North German Lloyd Line totally destroyed; and three of the four liners were burned-out hulls. Property damage was later placed at $2.25 million.

That Thursday had been a fairly typical day. The company estimated that about 500 men were working on the piers. The slips on either side of Pier 3 were vacant, the Aller, which had been docked there, had sailed for Naples at 11 AM. At Pier 2 were the Saale, due to sail the next day for Boston and then Cherbourg, and the Bremen. At Pier 1, farthest from the source of the fire, were the Kaiser Wilhelm, the pride of the North German Lloyd Line, and the Main. Perhaps as many as 200 visitors were on the piers that afternoon, the majority there to inspect the Kaiser Wilhelm, the swiftest of all ocean liners afloat.

The speed with which the flames spread prevented the four boats from leaving their berths. None had sufficient steam to leave under its own power. The Kaiser Wilhelm was the first to get clear, towed out into the river by the tugs Presi­dent and Sarah E. Easton. Of the four liners, the Kaiser Wilhelm was the only one to escape severe damage and the only one upon which there were no deaths. The fire scorched a streak some 200 feet long on its side and damaged some first-class cabins on deck, but the liner sailed three days later on July 3rd. 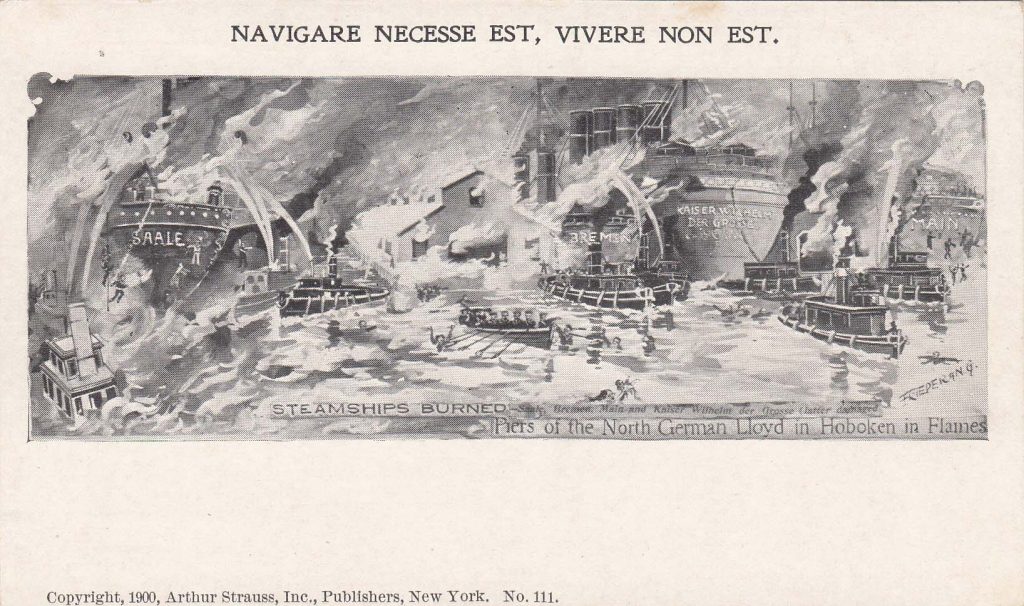 Steamships Burned at Piers in Hoboken

The other ships and the men working on them were not so lucky. The crews of the Saale and the Bremen, cut off by the raging fire on the piers, cast off the lines which moored both ships, but without steam, the boats were left to drift with the tide out into the North River. By then both ships were surrounded by tugs and fireboats and many from the two crews jumped into the river, risking death by water rather than by fire. The flames spread quickly across the wooden deckhouses and cabins, trapping the crews below deck. Some attempted to squeeze through the portholes on the side of the ships only to be hopelessly trapped. Caught in a cauldron of fire, the Main never had a chance to escape from its pier. The fire burned its way lower and lower into the vessel. It was not until 11:30 that evening, some seven and one-half hours after the fire first broke out, that the Main was finally towed away by the tugboat Edwin A. Stevens. One of the miracles of the fire occurred after the Main was beached, for out of the smoldering wreck came sixteen men. They had retreated before the flames to an empty coal bunker in the lowest part of the ship. There, below waterlevel, they were at least safe on three sides, although the ceiling grew red-hot and the threat of suffocation increased hourly. It was only when the men felt the ship moving away from the pier that they realized that they might escape death.

By the next morning the three piers of the North German Lloyd Line were charred ruins. The Saale, still afire, had partially sunk off Ellis Island; the Bremen, gutted by fire, awaited search crews looking for her dead. What was left of the Main had been beached at Weehawken. Crews were already at work on the Kaiser Wilhelm trying to repair the damage caused by fire and water. Early newspaper estimates placed the number of dead close to 400, and it was not until some weeks later when crews had had a chance to search the wreckage and to drag the harbor area that a more accurate figure of some 160 was established. Some of the dead — 80 in all — were buried in a mass funeral on July 4th at a plot purchased by the North German Lloyd Line at the Flower Hill Cemetery in Hoboken. And finally, the tragic story was not without its grisly afternotes; charges were levied that tugboat captains refused to pick up survivors from the waters or to lend assistance without the promise of financial gain and that cemetery officials improperly interred the 80 coffins.

As the checklist below shows, the Hoboken pier fire was the subject of at least 16 different cards published in this country and one published in Germany. Given both the early date of this disaster and its obviously regional interest, such a response is truly unusual. The response was also swift. Copyright records exist only for the six issued published by Arthur Strauss, but they reveal that the first of the Strauss cards (2D13) was copyrighted on July 5th, only five days after the catastrophe. The last in the Strauss series (2D19) was copyrighted on July 18th. The copyright dates are not, of course, the dates that the cards went on sale, but they at least indicate how quickly Strauss got his cards into production. As noted below, one variant occurs in the Strauss group. On Strauss #112 (2D16) a small vignette in the upper-left originally depicted a sailor waving a cloth out of a porthole with the caption: “Doomed men crying for aid out of the cramped portholes.” A later print­ing substituted a portrait of “Kapitan Hans Mirow,” the captain of the Saale who lost his life during the fire. All of the Strauss cards are drawings signed “Friederang.” Maximilian Franz Friederang (1857-1929), an American artist living in Brooklyn, was primarily a painter of frescoes. Presumably Strauss commissioned him to do the sketches.

The four issues by Franze Huld are also drawings, although considerably more crude in execution than the Strauss. One of these (2D3) is an enlargement from the scene depicted in another (2D1). The Lowey cards were obviously made from photographs as was the Livingston, which in fact carries a permission line acknowledging that the photograph was owned by the New York World. The Rost issue appears to be a blend of photograph and sketch.

Why such extensive coverage? Postcards were not well established in the United States at this period. The fire was indeed big news in New York City, but the final loss of life was not a huge concern since the victims were almost all German seamen, rather than Hoboken residents or passengers. The answer lies in the fact that it was a German-American disaster. The overwhelming majority of early postcard printers and publishers in the United States were German immigrants. Their ties in the German-American community were strong; they tended to publish cards which commemorated German-American events; and no doubt their market was largely among German-Americans. The very fact that the Huld cards, for example, carry titles in both English and German suggest this linkage, as does the German title on the Strauss #130.

Some issues are surely missing from the list. The Strauss and Huld sequences are complete. The Lowey seems to have contained at least a third (a #91). There are as well other issues linked to the disaster. Strauss #178, for example, pictures “New Pier of the North German Lloyd, Hoboken, N.J.” 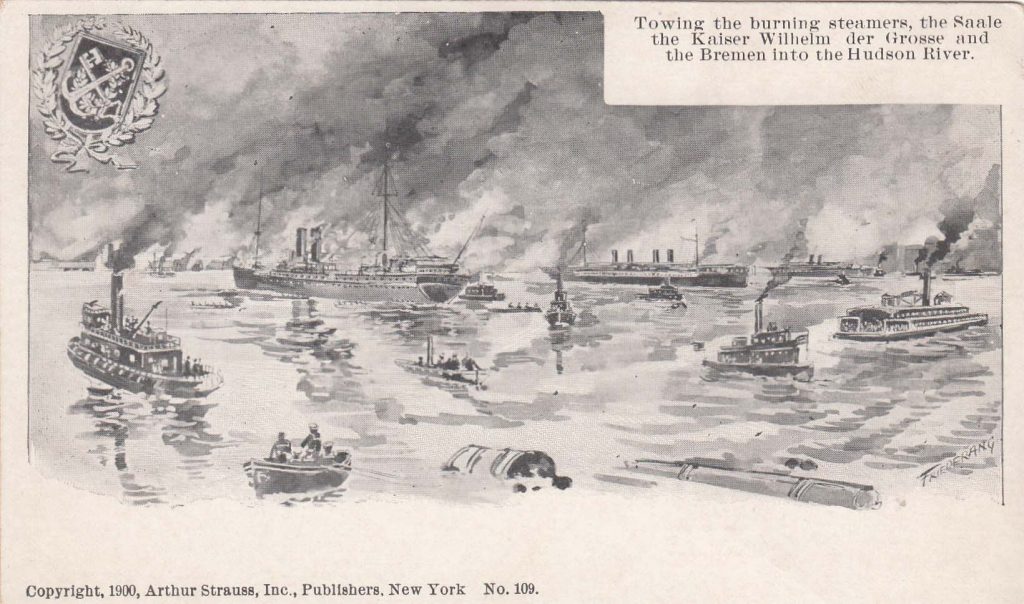 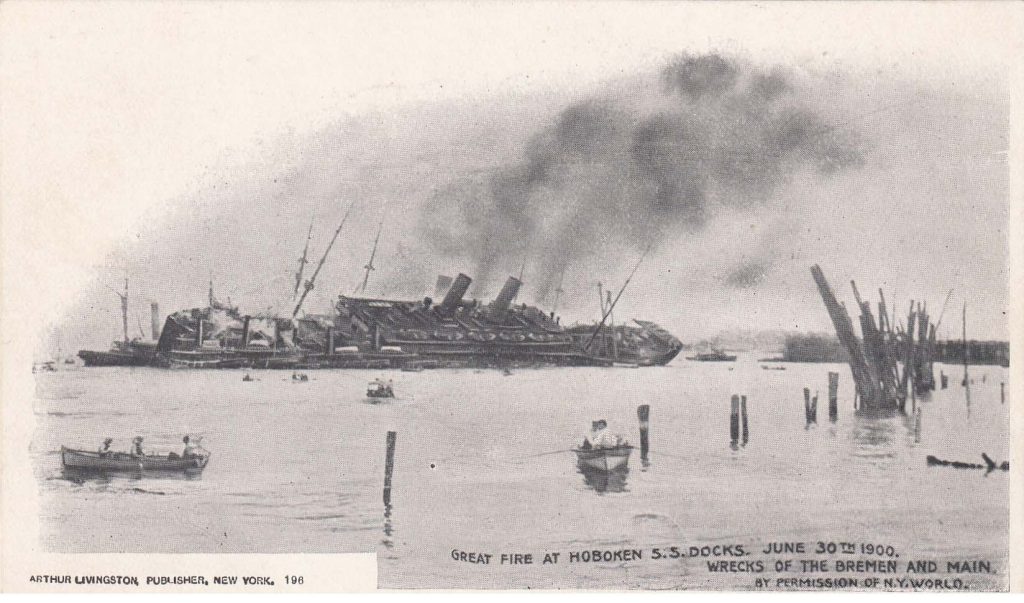 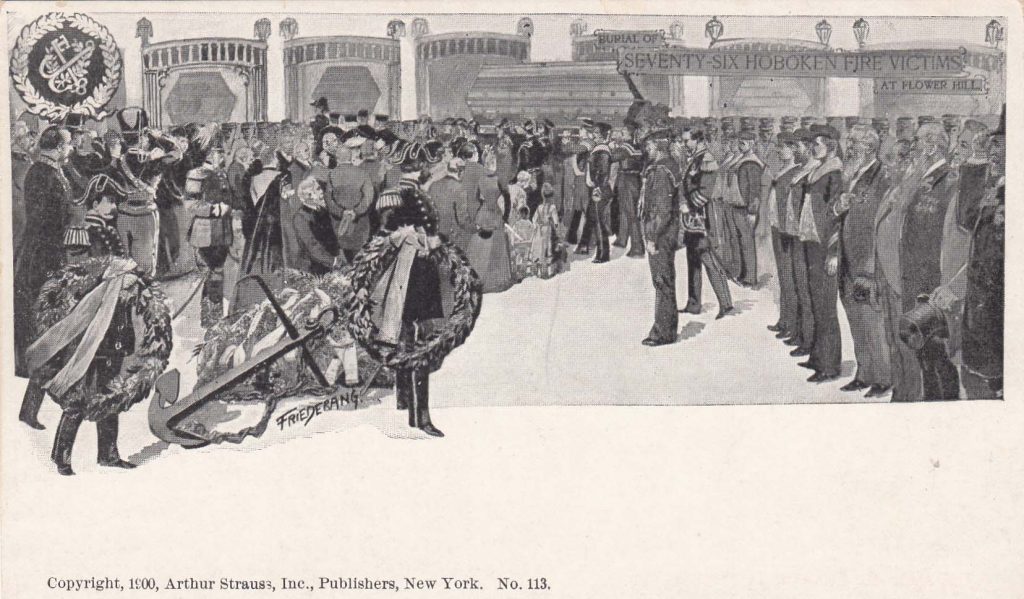 Numbers are skipped to allow for possible additions to this list.

Professor George Miller, University of Delaware, an accomplished collector and a frequent contributor to a national postcard magazine, has granted Postcard History permission to republish his writings from the 1980s and ‘90s. We are proud to offer his work to our audience. His postcard history lessons are timeless!
PrevPreviousThe Indian – One Man’s Tribute
NextThe Author and the Postcard MakerNext
3 Comments
Oldest
Newest Most Voted
Inline Feedbacks
View all comments
Bob Kozak

Well-written article. I had not heard of this disaster until today.

Thank you for such a well written and educational article. I was not aware of this incident and did not know about the postcards that were made telling and showing the story. I enjoyed learning about this tragedy very much.

Before the SS Main disaster in 1900, the USS Maine was sunk in Havana Harbor in 1898, also the subject of many postcards.