The Author and the Postcard Maker

It is difficult to assume that Charles Dickens (1812-1870) and Raphael Tuck (1820-1900) knew each other or ever met. Dickens lived in London his entire life; born in 1812, at work by age 15, and a successful author with a preposterous amount of money in the bank by 1836 after publishing The Posthumous Papers of the Pickwick Club (also known as The Pickwick Papers).

Raphael Tuck was born in 1820 at Poznan (once in Prussia, now in Poland). He married in 1848 and with his wife Ernestine (nee) Lissner had seven children. The family moved to London sometime after 1860. Tuck and Ernestine opened their first picture and frame shop in 1866, and enjoyed some immediate success but postcards were not their first line offering. Their first greeting cards were published in 1871. Their first postcards appeared in early 1900 – only months before Raphael Tuck’s death on March 16, 1900.

If the two men met it would have happened between 1860(?) and 1870. It may be safe to assume they did meet, but the better question would be: “Did Raphael Tuck’s son, Adolph, have a genuine interest in English literature or did he see a business opportunity to make lots of money?”

Throughout the years in which Charles Dickens flourished as a newspaper columnist, novelist, and writer, he accomplished fifteen novels and five novelettes. 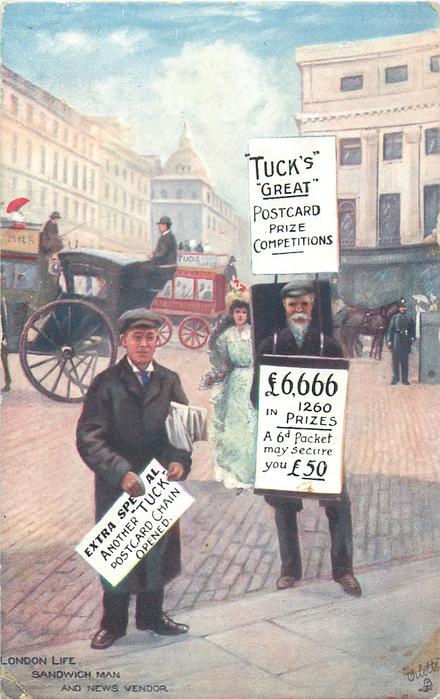 ** One of the very few unnumbered Tuck postcards.** 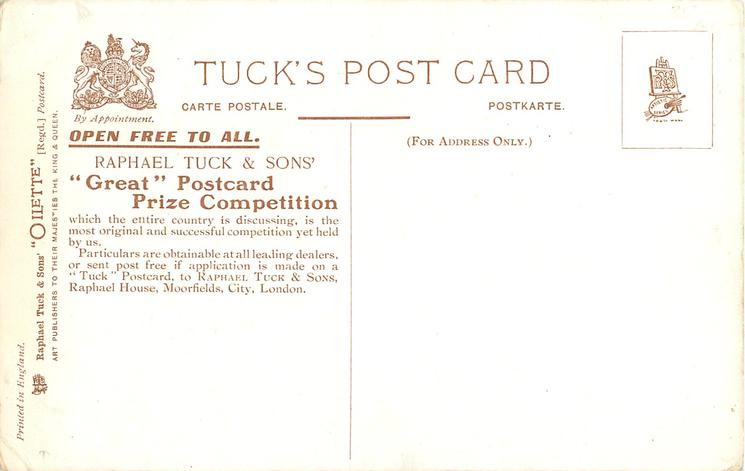 Tuck and his sons created a business that succeeded on four continents and in one iteration or another lasted for over 120 years. The firm had legions of contributors, some paid, some solicited, and some entreated. Artists from three continents and photographers from around the world worked for Tuck. Even at that, pictures and photographs were often hard to find. One very successful source of material were the competitions.  Four such events occurred: 1900, 1904, 1906, and 1914, and a special competition was held for children.

The Tuck company produced precious few postcards that were unnumbered, but the one you see here is one of them. For one competition Tuck put aside £6,666 (British Pound Sterling) as prize money. When all was done and said, a competition winner could go home with more than £50 in his pocket. A near fortune in the day.

There are no known records of which cards were made from prize winners in the competitions, but it may be safe to assume, many.

But then, what did the company do for new material in times when new and different cultural, ethnic, educational, and social material was needed? As most British still do, they turn to their own art, architecture, folklore, music, sculpture, and literature.

Literature is defined in many terms (fiction, poetry, short stories, novel, drama, comedy) and in ways, still being explored, Tuck used them all and, in many instances, combined the literary with the artistic. Works by writers in every genre and many nationalities (British, Irish, Scottish, Canadian, American) were considered, but hands-down, the work of Charles Dickens made the most desirable and popular postcards.

The extensive yet incomplete research into the Dickens phenomenon has brought this fact to light. Raphael Tuck & Sons published postcards illustrating, in one way or another, sixteen of Dickens’s novels. David Copperfield was the most popular topic. There are 28 Tuck postcards featuring the celebrities who acted in stage productions, characters such as Mr. Peggotty from the story, and the story itself in artistic interpretations.

The most collectable of the Dickens cards is a lengthy series entitled, In Dickens Land. The drawings are by Harold Copping, S. Aveling, Phiz (alias for Hablot Browne), and there are single cards scattered throughout the catalog by other artists.

The lion’s share of the Dickens issues are the story cards from Bleak House, Little Dorrit, David Copperfield, and Dombey and Son. The artistry in these sets (mostly by Phiz) is associated with specific chapters in the story. The citations are identified by a chapter in Roman numerals at the end of the quote(s). 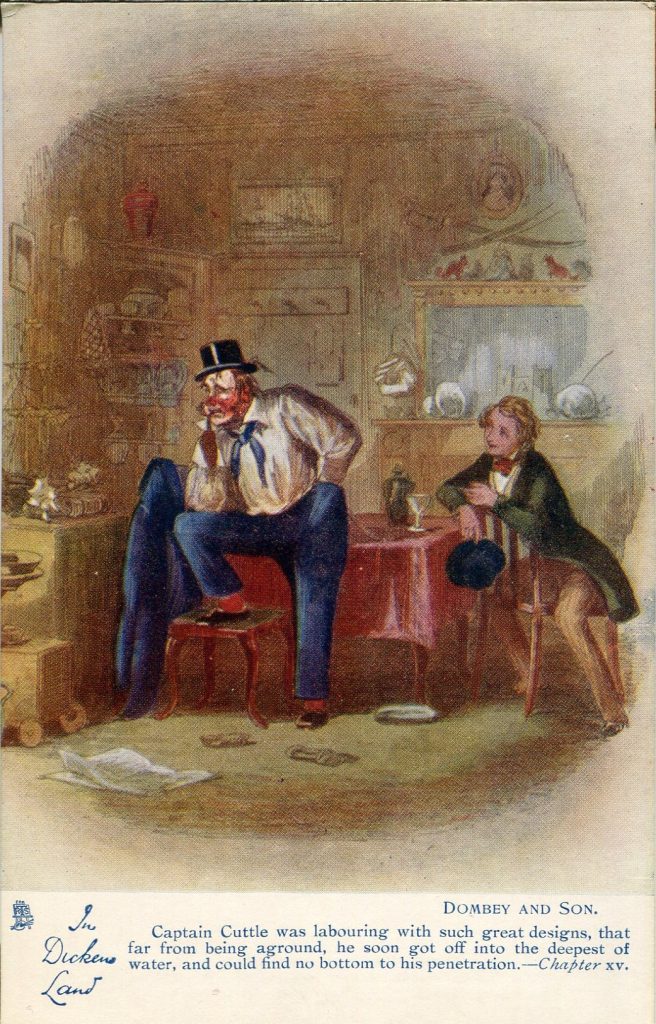 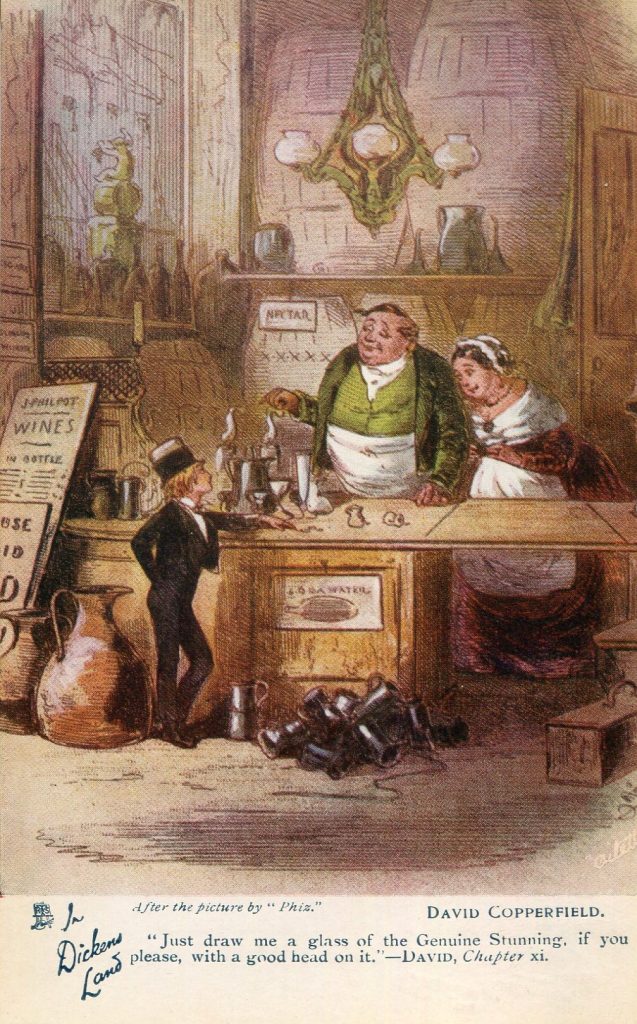 For instance, (left) in Series #6050 Dombery & Son, in Chapter XV, Captain Cuttle was laboring with great designs…; and in Series #6047 David Copperfield, in Chapter XI, David tells the innkeeper, “Just draw me a glass of the Genuine Stunning, if you please, with a good head on it.” 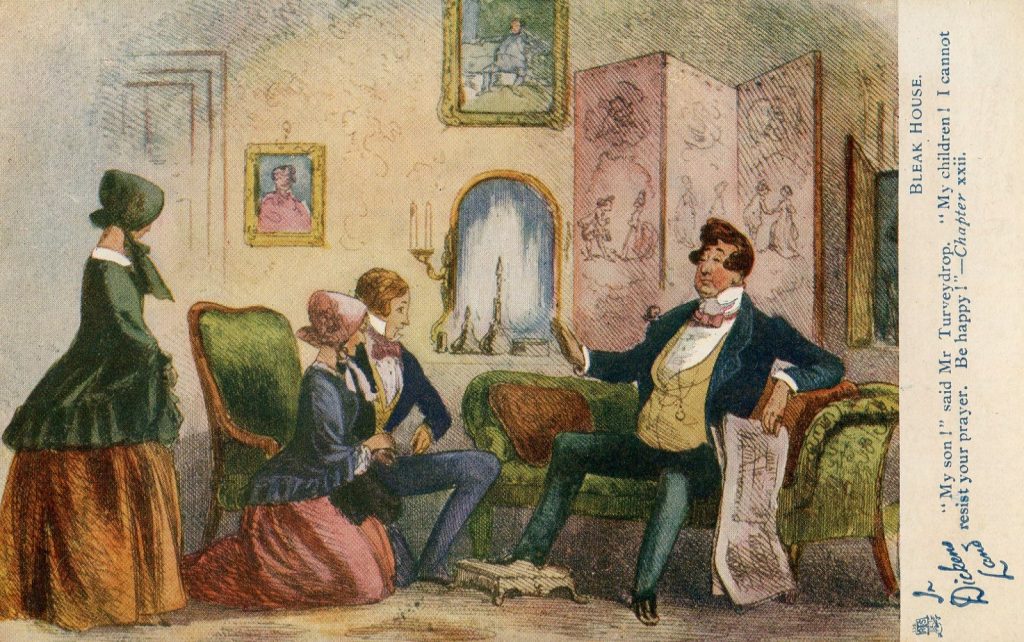 In Series #6051 Bleak House, in Chapter XXII, Mr. Turveydrop tells his son, “My son! My children, I cannot resist your prayer.” 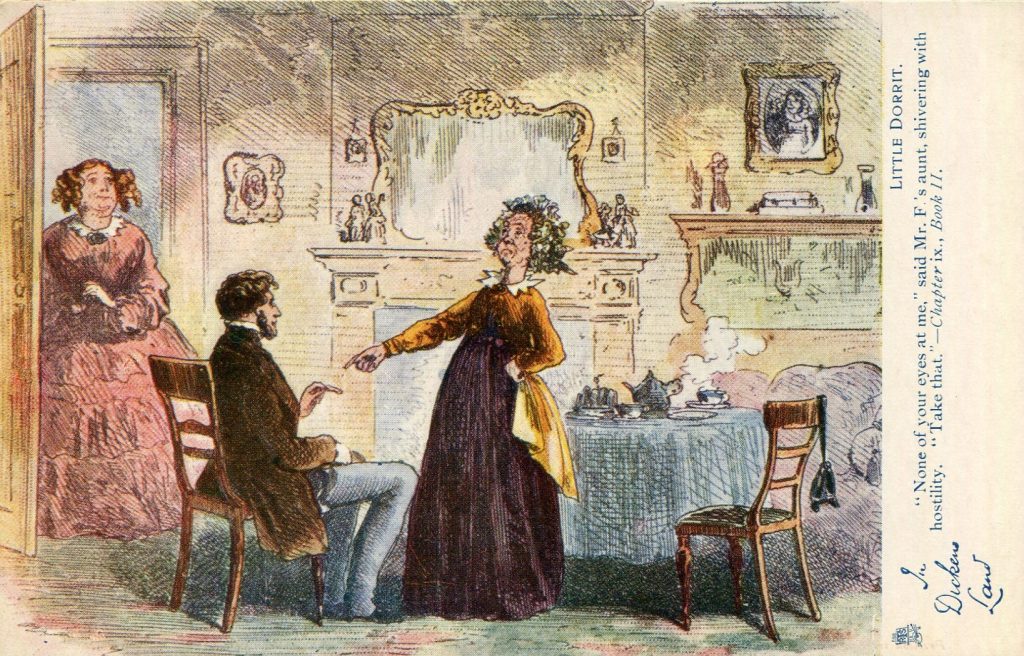 Although it would be interesting to know, an attempt to discover has failed to turn-up a number relating to the total number of postcards ever issued with Dickens themes. Is there one, among our readers, who may know the answer?

The Staff of Postcard History offers this article for your enjoyment. It is a combined effort of many: our publisher, editor, webmaster and collectors/contributors far and wide. Please use the COMMENTS feature below to let us know how we're doing.
PrevPreviousThe first major disaster recorded on postcards – The Hoboken Pier Fire – June 30, 1900
NextHires Root Beer – The First American Carbonated DrinkNext
3 Comments
Oldest
Newest Most Voted
Inline Feedbacks
View all comments
Bob Kozak

As an English major, I read Dombey and Son for a paper in college. I was assigned Bleak House in another course, but never finished reading that novel.

I have quite a few by TUCK. These I can post in a day. Here are my first TUCK postcards from my collection.