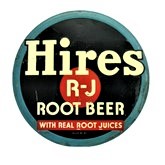 You can’t find Hires Root Beer anywhere, anymore, no matter how hard you look. The company that now owns the brand name has effectively retired it to push its A & W brand.

In its time, though, Hires Root Beer ruled the roost.

We may think that Coca-Cola or Pepsi-Cola came first. After all, they shared a similar history. Both were originated in the American South (Pepsi in 1893 in New Bern, North Carolina, Coke in 1885 in Columbus, Georgia). Both were created by local druggists. Both were heavily advertised for their health benefits and as alternatives to intoxicating beverages like beer. 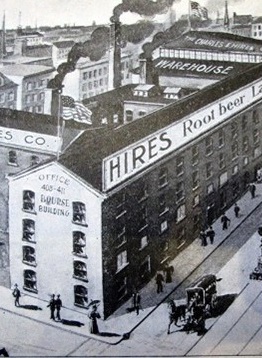 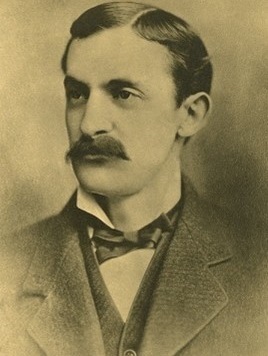 Charles Hires was an enterprising New Jersey boy who had a play drug store where he sold colored water in bottles he found, flavoring the water with different roots, barks, and herbs. He was apprenticed to his pharmacist brothers-in-law and soon was immersed in the patent medicine world of the post-Civil War era. He struck out on his own in Philadelphia, developing a product for cleaning wool and cotton cloth, using the mineral Fuller’s earth. He called it “Hires Special Cleaner” and it sold so well that he was able to investigate new products.

On his 1875 honeymoon, Hires and his bride were introduced to a sparkling cool drink that the host described as being made from roots, barks, and herbs. They returned home with the recipe and over the next year Hires developed a powdered product he called “Hires Root Tea,” which he sold in packages out of his drug store. He was convinced to rename it “Hires Root Beer” on the grounds that too many people wouldn’t drink tea, no matter what.

At the 1876 Philadelphia Centennial Exposition he sold the packages, demonstrated how to make the beverage, and offered samples of the carbonated drink.

Hires had stumbled onto the fad for the drug store soda fountain.

He soon diversified, adding a prepared syrup version for sale to soda fountains in drug stores, even making his own dispensing machine. By 1895 he had established his own bottling plant and was even shipping his root beer in kegs.

Hires believed in advertising. Lots of it. He explained his philosophy by saying that “doing business without advertising is like winking at a girl in the dark. You know what you are doing, but nobody else does.” 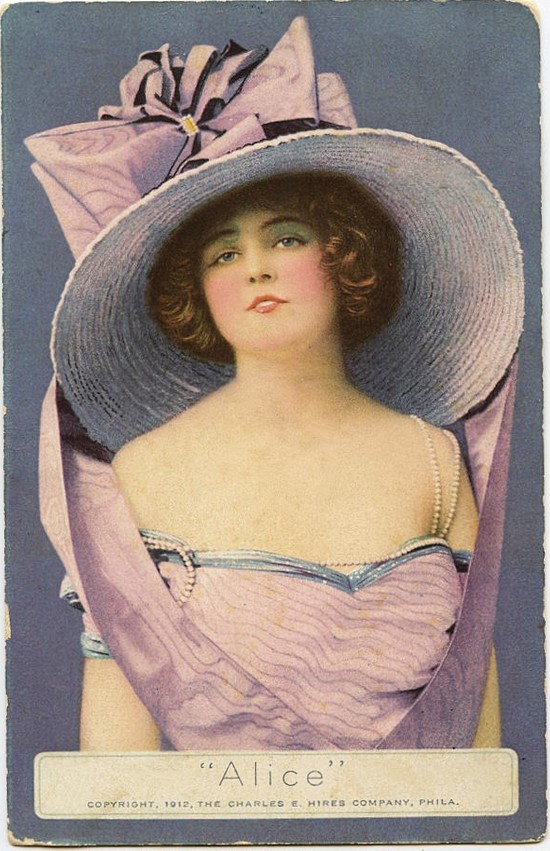 He was an innovative advertiser. For example, the Philadelphia Journal, like most newspapers in the 1880s, would only accept single-column ads, but he convinced them to take ads that crossed several columns. He created colorful trade cards and postcards. As mass-market magazines came into vogue, he was a regular advertiser, taking advantage of the full-color images they could print. He had his ads painted on the side of buildings and he had tin signs made for the walls of local stores. If there was an advertising medium, he made use of it. 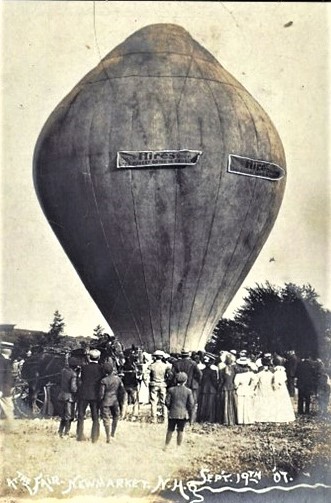 And, he had to fight off pirates. In the 1890s one newspaper wrote that “it is doubtful if any modern commodity, excepting money, has been counterfeited more than Hires Root Beer.” After a protracted lawsuit, a Philadelphia court levied a $1,000 fine against a competing soda fountain operator for selling phony Hires. It somewhat gave the imitators pause.

The “Root Beer” tag led to some serious problems with the temperance wave sweeping the country. When an unknown chemist announced his tests showing that his soda had alcohol in it, Hires commissioned his own test that showed only as much alcohol as half a loaf of bread. He began referring to it as “The Temperance Drink” and “the Greatest Health-Giving Beverage in the World.” 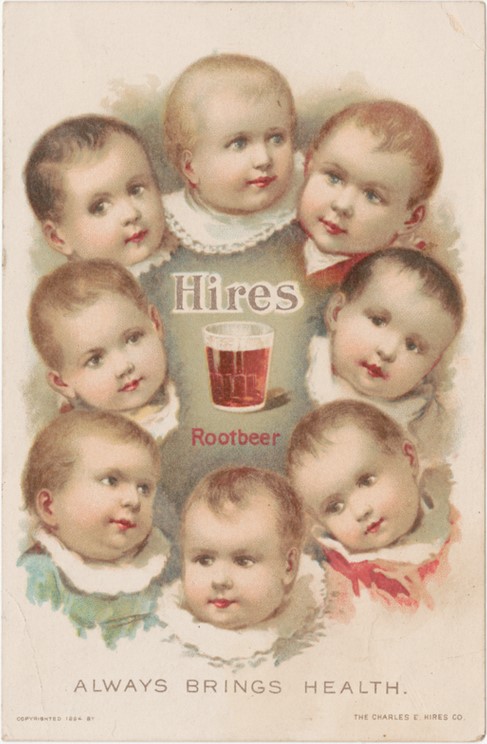 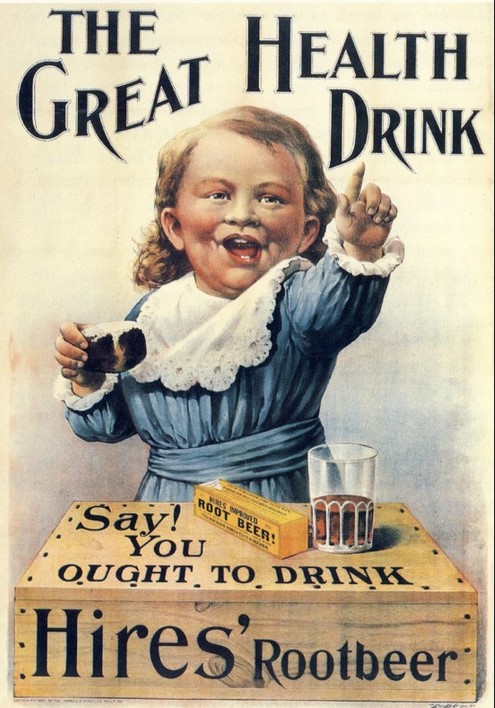 Nevertheless, in 1895 the Women’s Christian Temperance Union denounced root beer as alcoholic and called a nationwide boycott. Even the New York Times ran a story “Is Root Beer Insidious?” The Times cast doubt on the problem at the end of this story, but the boycott was devastating to Hires’ sales for a year before Hires advertising onslaught against the charge took hold and the WCTU abandoned the boycott in 1896.

As the Prohibition Era was drawing to a close, the Times ran another story in 1928 about a WCTU meeting in New Hampshire that warned against the fermentation process used to produce root beer. After weighing the pros and cons of the use of yeast, sugar, warmth, and time, the article concluded that “home-brewers and drinkers of the flavored, fermented danger, be not deceived! Nature will have her way with her kick.”

Hires revenues ballooned at a 29% rate between 1902 and 1909 as soda fountains sold 65 million glasses of root beer at a nickel each. Mrs. Hires died in 1910 and Hires remarried a family friend the following year. Charles Hires died suddenly at 85 in 1937 but the company continued as a family business until 1960. Through a series of sales, the Hires name was slowly strangled and overshadowed by the A & W brand name by its eventual (i.e., current) owner Cadbury Schweppes and its spun-off successor entity Dr. Pepper Snapple Group. 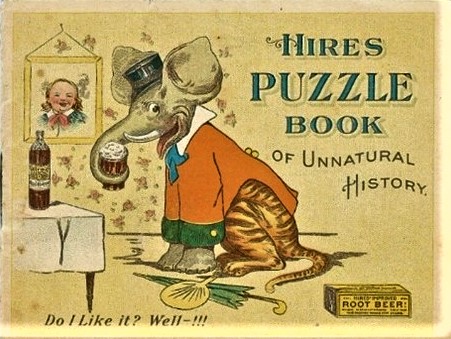 It is now impossible to find Hires Root Beer for sale.

Bill Burton began collecting Ossining, New York postcards when he lived in that Hudson Valley town. His collection expanded, of course, to include his college, the neighboring towns, and places where he and his wife traveled. In retirement, he's refocused on Delaware and the DelMarVa peninsula towns, but he’s just as likely to be found parked in front of the 25¢ boxes at shows.
PrevPreviousThe Author and the Postcard Maker
NextA Fifth Sunday Special – another look at three odd postcardsNext
9 Comments
Oldest
Newest Most Voted
Inline Feedbacks
View all comments
Brenda Hoyles

Thanks for the great article on Hires Root Beer! Ever since I was a young girl, I have loved drinking Hires Root Beer. Your well-researched article contained a wealth of information and rekindled great memories. I still enjoy Root Beer ice cream floats. A & W Root Beer and Stewarts Root Beer are my favourites now.

I wouldn’t want to drink root beer every day (I generally have a Diet Mountain Dew at lunch and a Caffeine-Free Diet Coke with supper), but every once in a while I have a craving for the beverage popularized by Hires and now often produced by “brewpubs” as a non-alcoholic alternative to their craft IPAs and stouts.

In Ontario Canada one may find a “Hard” version of Hires Root Beer. Think the “essence” is also still sold for home brewers.

I didn’t know that, James. What does “hard” mean? And who is making the “essence” and where can it be bought? Inquiring minds want to know.

The story about HIres Root Beer reminds me the early 1960’s when I was working as a “Stock Boy’ at Baileys Dept. store in downtown Cleveland, Ohio. After loading the UPS truck w/parcels to be delivered to customers home I would “sneak” over to the nearby Kressge Dime Store to see my high school sweetheart (to whom I have now been married to for the past 58 years).At the very rear end of the store facing Prospect Ave there was a Hires Root Beer Stand where I could buy a Hires Root Beer and a hot dog for about 25… Read more »

My dad opened a soft ice cream shop and we used hires root beer to make floats and a black cow was root beer and chocolate ice cream floated in it. It was the best. It needs to be “re-hired” lol.

Thank you. Like most people, I remember enjoying a great Hires Root Beer as an after school thirst quencher. I miss the brand but will make due with whats available now. Great information!

I didn’t know that the Hires name had been retired. This is a very interesting article. Love the exploration of root beer history.